MInisforum is a really interesting company that focuses on ultra-small form factor PCs for various applications from the office to the living and an intriguing model with a GTX 1050Ti stuffed into it. But we're here today for their latest model the Minisforum U850 that offers to pack quite a few features into one of the smallest spaces possible but still leave room for expandability for those who have a need for even more storage but not the need for a full-size computer sitting on their desks. But how is the overall package of the $659 tiny PC?

The Minishforum U850 is one of two available models in this setup, the other being the U820 that features an 8th gen Intel Core i5-8259U. The U850 comes in a package that is not much bigger than a normal coffee cup coaster 127mmx127mmx53.1mm but comes with some quite nice specifications and options. As far as CPUs go the U850 comes packed with a 10th Gen Intel Core i5-10210U Comet Lake CPU with 4 cores and 8 threads, but by nature of a 'U' part we're looking at a 15w limit.

Memory is specced out with a pair of Kingston 8GB DDR4 2666 modules arranged in dual channel delivering 16GB of total memory. Storage is started off with a Kingston 256GB NVMe SSD. So not only are you getting a lightweight snappy CPU, you'll be paired up with a good amount of storage for productivity and a fast storage solution so you should never feel like you're slogging.

The total package for the Minisforum U850 ensures you have everything you need to get started (sans Monitor, mouse/keyboard). It comes tightly packaged in a box just big enough to fit it all accentuating the small nature of it all. Tucked in the box you'll find the following contents; 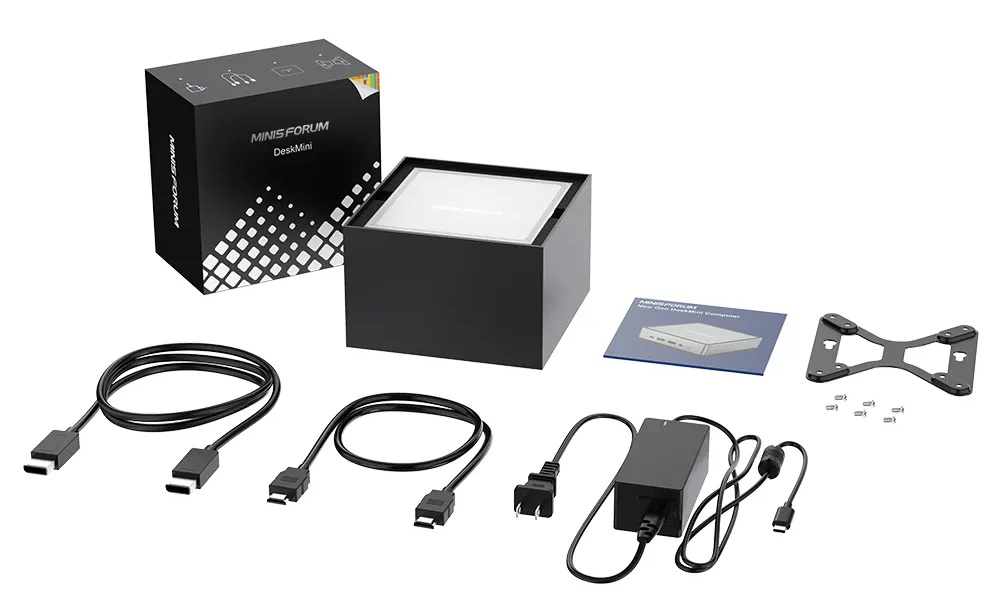 Case, Build, And Inside

The Minisforum U850 is of surprisingly solid build quality. The main body of the unit with the I/O is metal while the bottom of the case is plastic and well ventilated for the fan and cooling solution, while the top is also plastic but features push-lock retentions so you can easily pop the top off and gain access to the 2x2.5" storage bays for easy upgrades.

The front of the U850 features the power button, a headphone jack, a digital mic, a pair of USB 3.1 Gen 2 Type-A ports, and a full-featured USB-C port. The rear of the U850 features two more USB 3.1 Gen 2 Type-A ports, an HDMI port, Display Port, a standard RJ45 Gigabit Ethernet port, a 2.5 Gigabit Ethernet port, and a USB Type-C port for power only (No data transfer on this one). 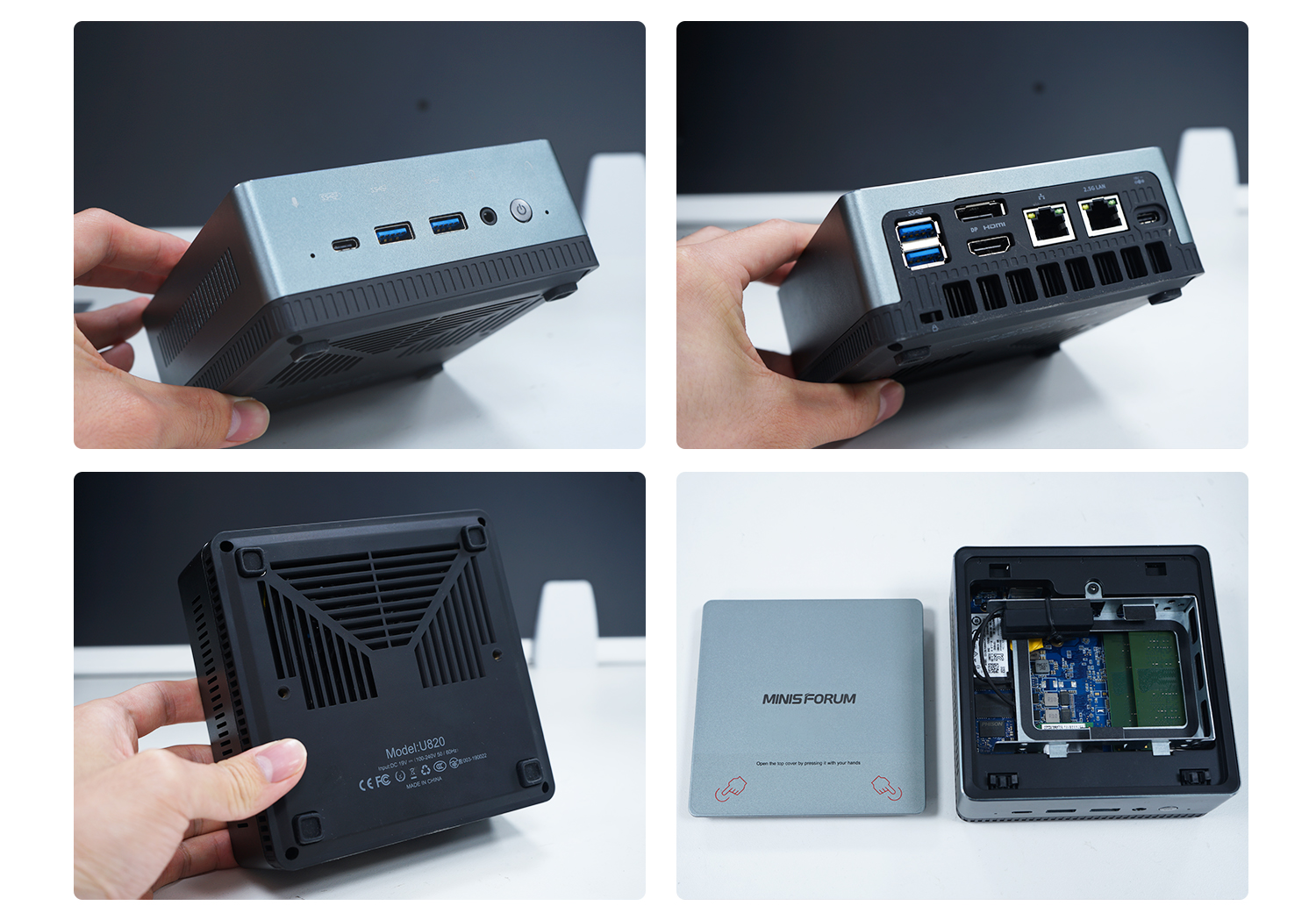 Popping the top off of the U850 reveals the caddy that is removed with a single screw for the 2x2.5" expansion drives. These can be populated with whichever storage option you prefer whether that be a spinning HDD or a super-fast SSD. 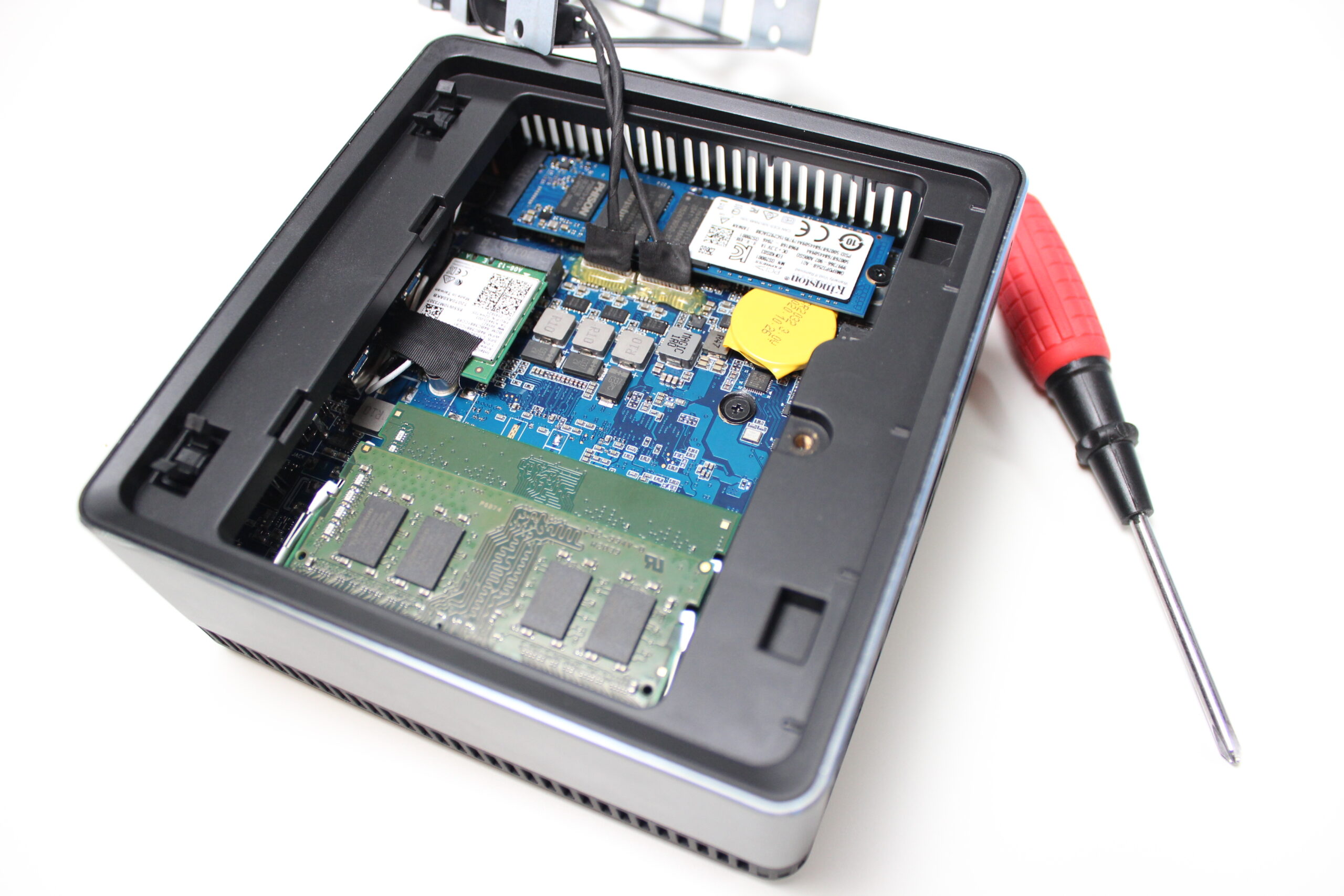 Under that, you'll have clear access to the two DDR4 SODIMM slots and the NVMe slot. You'll be able to replace the included 256GB NVMe drive if you want to install a much larger model, but you might be better off just buying a standard 2.5" SATA SSD and populating those open bays. 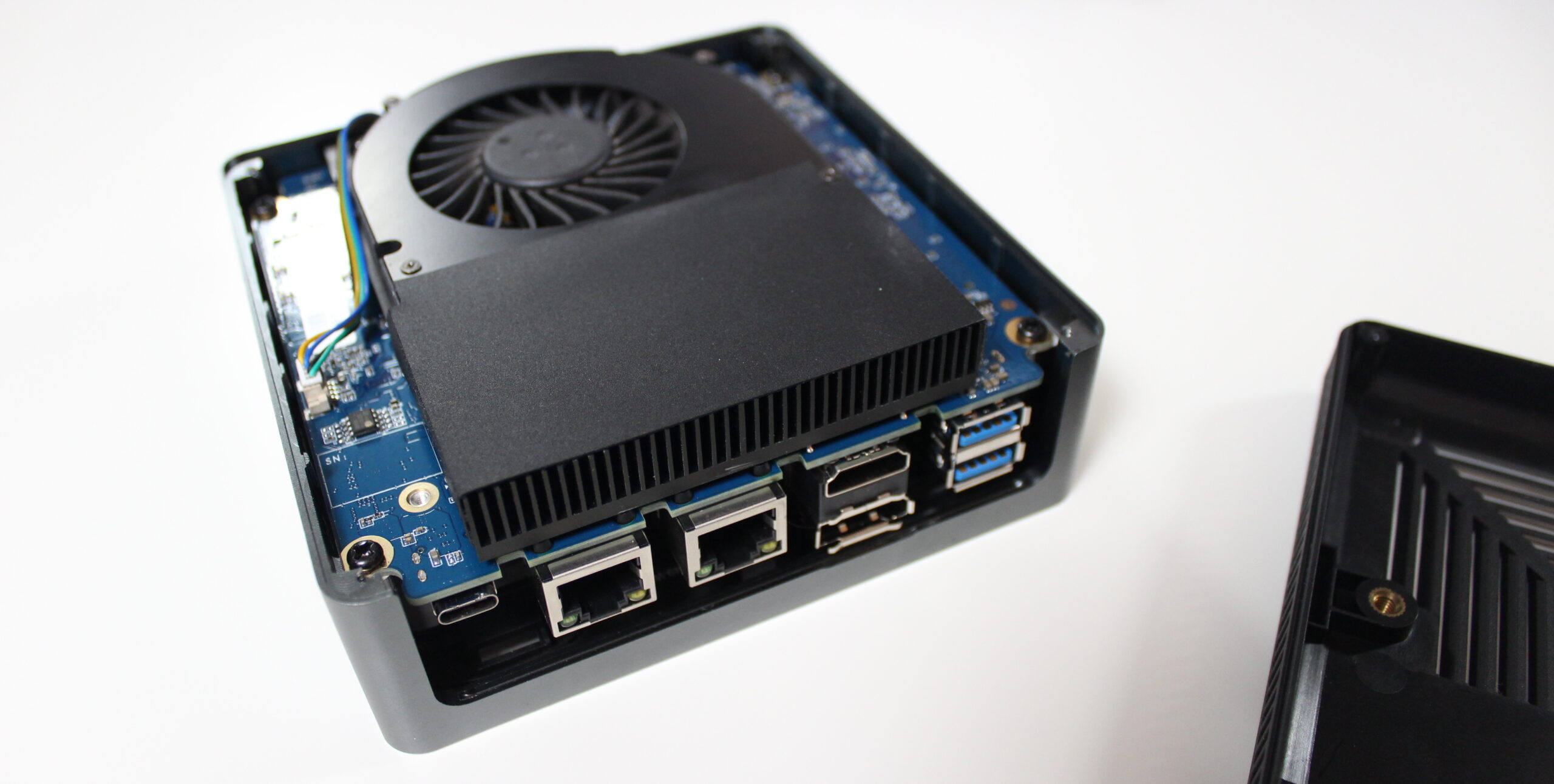 Flip the unit over and you'll find the absolute overkill cooling chamber for a 15w U-class part, makes me wonder why they didn't push these with 25w or greater parts and enjoy the massive performance boost. But, with that gripe out of the way, it's super easy to remove the bottom with just 4xphillips head screws in order to have access to that area for cleaning and maintenance.

We've already gone over the specifications of the Minisforum U850 with its 10th Gen Intel Core i5-10210U, 16GB DDR4 2666, and 256GB NVMe SSD but how does all that translate to performance? Well, it's not all that bad for a daily driver for office or home office use. You're not going to be pounding the WASD keys and owning any noobs but you will be able to pound out some TPS reports and watch some videos while working. 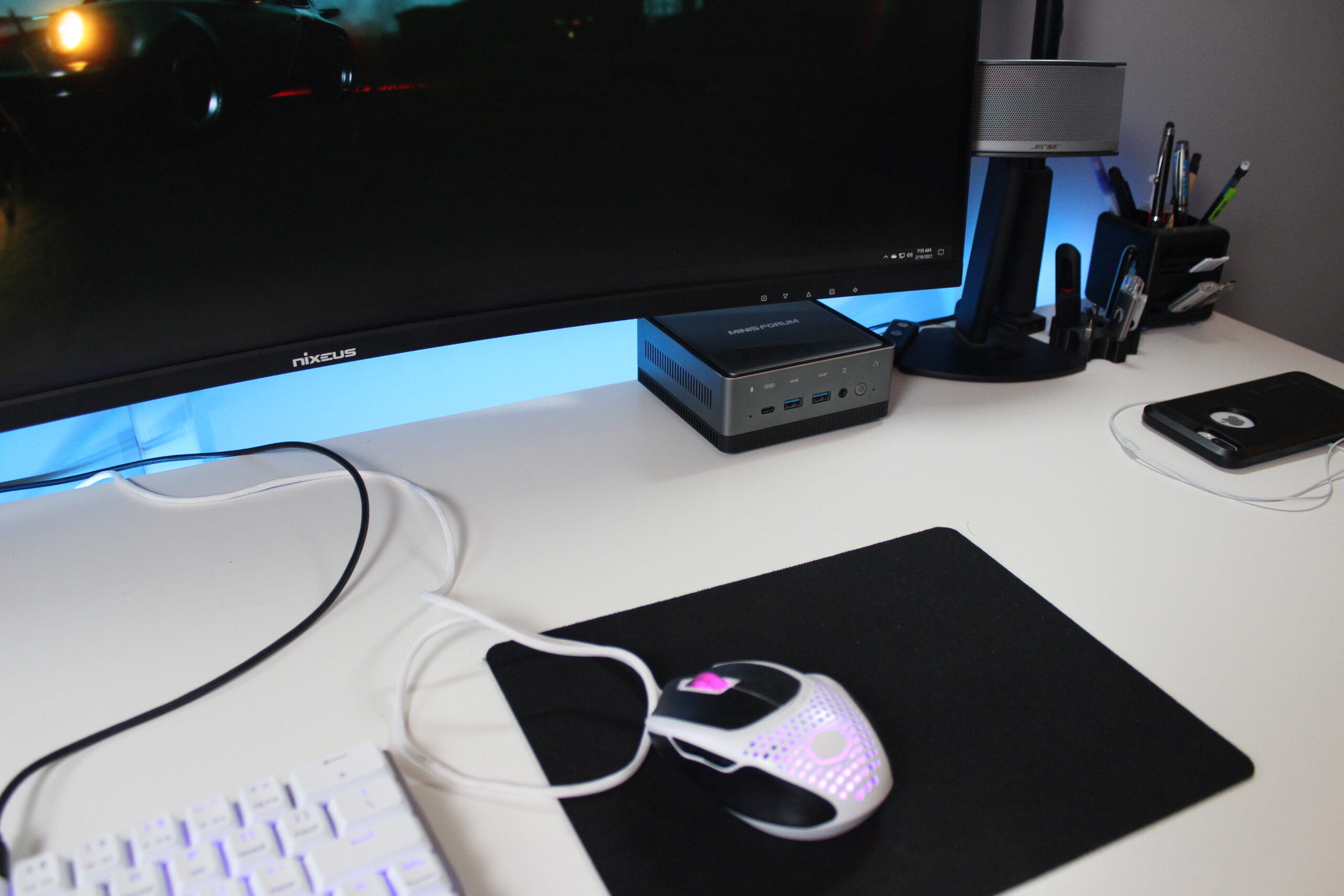 We ran a few tests to get an idea of the performance of the Minisforum U850 and found it to be a rather decent performer for office tasks but it is clearly not suited for digital content creation like video editing or modeling, if those are on your radar you'll perhaps already be looking elsewhere but we wanted to make sure that was clear.

The Cinebench R20 test reinforces the notion that this isn't best suited for rendering applications, while it's possible you'll be waiting a bit for it to complete. This test was mostly conducted to monitor clock rates under heavy loads. During the Single-Core test, we saw the CPU frequency bounce between 3.6-4GHz, and under the Multi-Core test it dropped down to a stable 2GHz for the duration of the test.

We ran 3DMark Firestrike just for the CPU performance metric.

AIDA 64 shows us how the system handles memory-intensive workloads and while it's not going to break any kinds of records we still see a fairly competent performance from the tiny platform.

The Kingston NVMe 256GB NVMe SSD that is included isn't breaking any speed barriers either but it does prove itself to be fast enough to where you really won't be feeling like you're waiting around for things to load. 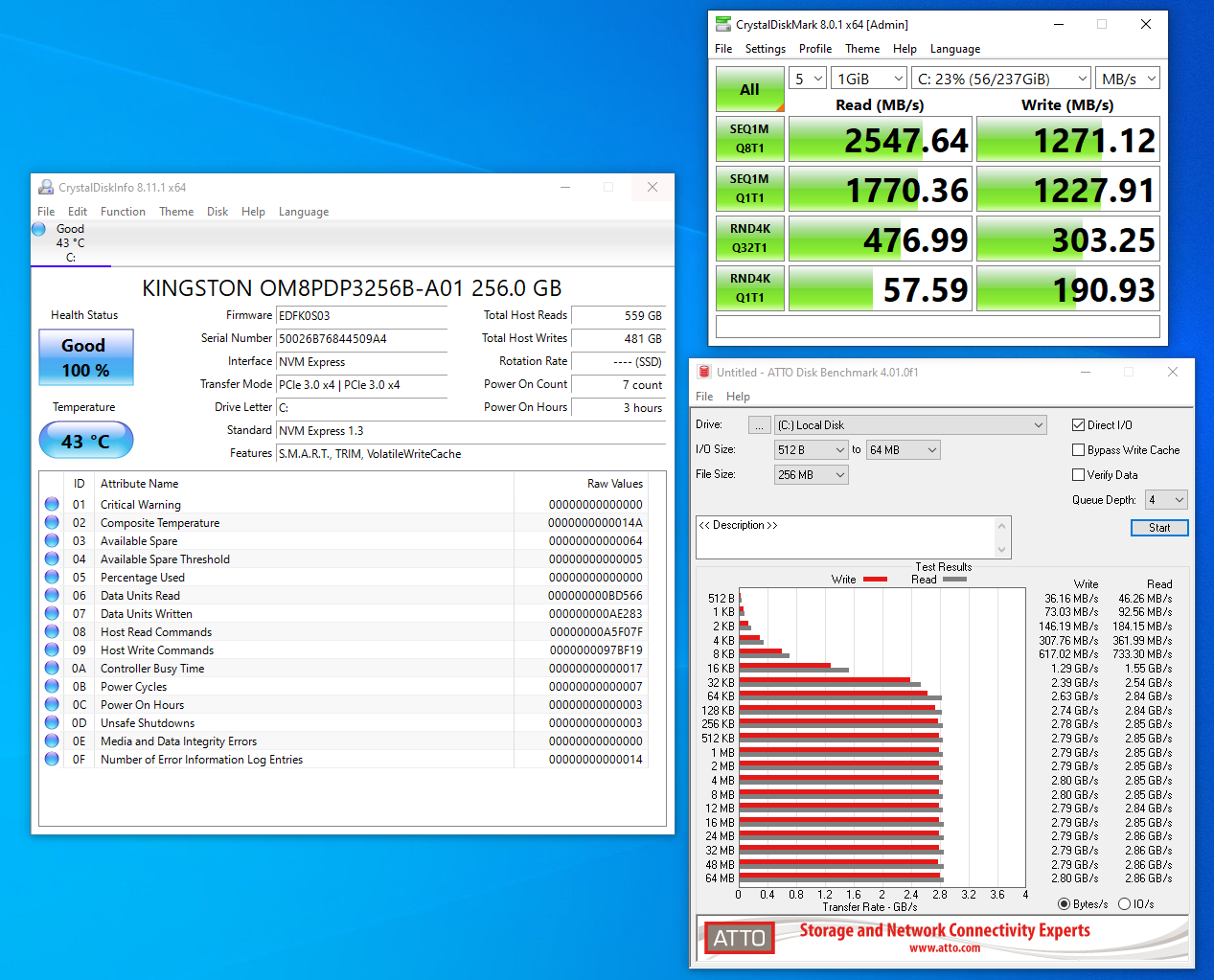 At the end of the day, the Minisforum U850 offers up reasonable performance in an exceptional package. I built my wife a tiny pc about a year ago inside the Inwin Chopin with an i5 9400, 16GB of memory, and an admittedly larger 1TB NVMe drive and the overall performance isn't much different but the Minisforum U850 ended up being much smaller, and even much quieter, for around $100 less than what I spent to build that system when you include even the gray market windows 10 key.

While the price tag might seem a bit steep I find it to be a good offering considering how much went into the design of this system. Many computers like this you're kind of stuck with what you get while the U850 offers expandable and upgradeable memory and multiple storage options you'll be able to tailor this to the office/home office needs of your liking.

No, you're not going to be getting a robust gaming system and if graphics are what you're after in a small form factor like this they do offer Ryzen based solutions with Vega integrated GPUs so you might want to check that out. BUT! With that said I have absolutely been enjoying using this as the basis for emulation with ReDream and Dolphin, but CEMU is a bit tough. 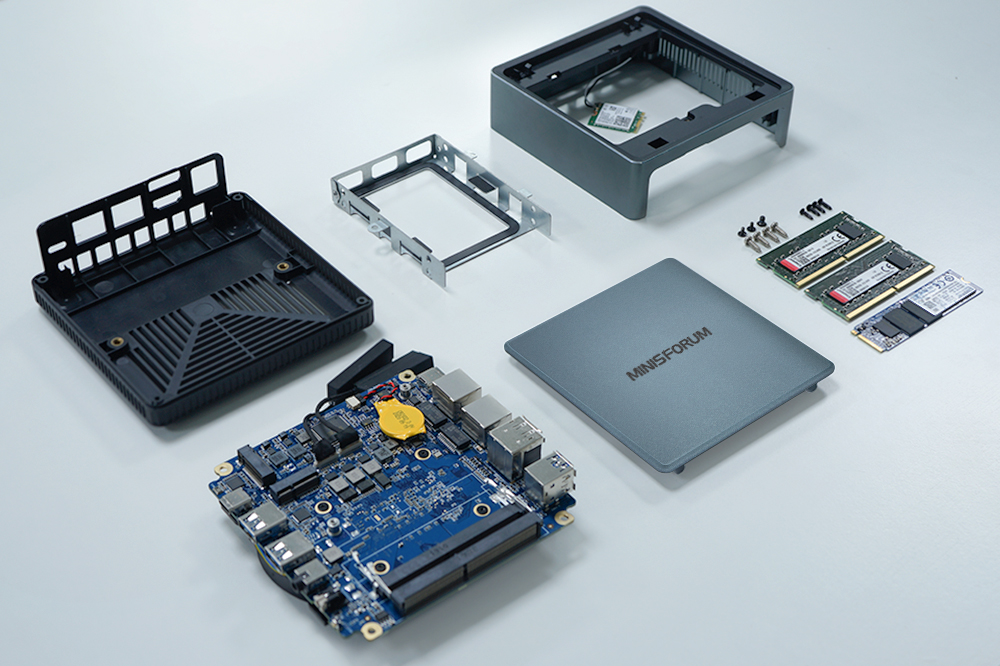 Solid packaging, easy to get into, small and spirited, the Minisforum U850 delivers a competent package that is friendly to the owner and light on the power draw. You'll find this one quiet at home in most office or home office environments where video editing or 3D modeling aren't required. The first 100 units they sell will be eligible for a $50 off savings making it $609 for those folks when purchased at the Minisforum Store.

The Minisforum U850 delivers a competent package that is friendly to the owner and light on the power draw.