Middle-earth has been a fantasy setting that’s been neglected in recent years. After the well-deserved fame of the original trilogy wore off, as did its influence on gaming. It wasn’t until a surprise hit from Monolith Productions and Warner Bros in 2014 that JRR Tolkien’s masterwork would be given new virtual life with a surprisingly in-depth adventure that few were expecting.

With the original Middle-earth: Shadow of Mordor, players first stepped into the boots of Talion, a ranger cursed with undeath and sharing a host with the deceased Ñoldorin prince known as Celebrimbor. As those of you versed in Lord of the Rings lore will know, Celebrimbor was the Elven mastersmith that Sauron managed to trick into crafting the three Rings of Power destined to the Elves.

The newly forged Ring of Power, brought into reality through the combined efforts of Talion and Celebrimbor during the finale of Shadow of Mordor, comes with it an entirely new set of conflicts. Much like the other Rings that led to years of strife and malice across Middle-earth, The New Ring is such an artifact that everyone wishes to claim it for themselves but only a select few can use wield its influence. Its mere existence guides the narrative to Shadow of War, as it's the only tool that’s capable of truly putting Sauron on the defensive.

While the majority of Shadow of War’s story is centered around the conflict between Celebrimbor and Sauron, the narrative is woven with a common thread: betrayal. Whether it's acting in self-preservation, a lust for power or sacrifice for a loved one, no one in Gondor is working solely for Talion on behalf of generosity. Shelob, the ancient spider that often takes the form of a feminine black widow, might prove to be one of Talion’s unlikeliest allies as her lust for Sauron’s demise can prove greater than her desire to possess The New Ring. There’s a dynamic between Talion and Celebrimbor that evolves as Talion rises through the ranks, each person having their own views on their mutually beneficial relationship. As fortresses are sieged and The Bright Lord’s army grows in numbers, is the Elvish Ringmaker truly working with the interests of Mordor in mind?

Building upon the Nemesis system that was a gaming first when it was introduced in the original Shadow of Mordor, Talion's new adventures with the New Ring bring a new layer of tactics for the player to discover. Challenging the armies of Sauron and taking back Minas Morgul from the clutches of the Ringwraith will take more than just an undying ranger and his spectral guest. Sometimes an unruly mob of orcish grunts can be the manpower you need to siege a fortress and claim it for your own. Under the guidance of The New Ring forged in Talion’s first adventure, this ring of power has the ability to mark Uruk-Hai as The Bright Lord’s Chosen and adding them to the ranks of his armies across each region of Mordor.

Celebrimbor's role as a tactician truly shines in Shadow of War once the player has installed a number of their own Warchiefs within the besieged city. If an allied captain controls every point in the city, the keys to the city are literally gifted to Talion and he can walk through to the final keep with little to no resistance, barring any last-minute betrayals from their captains (which knowing how fickle Uruk can be, this happens quite often). Trying to siege a fortress blindly only results in Talion's repeated deaths, so even taking a few minutes to interrogate low-level grunts and learning the weaknesses and strengths of captains and bodyguards is tantamount to a successful raid.

I can’t tell you how often I had to hop into the character menu and swap Talion’s skills around just to get abilities that weren't immediately nullified by the captain’s immunities. For times when immunities weren’t an issue, I typically ran with frost-enhanced defensive and evasive abilities, poison on Elven Light (an AoE skill), and abilities that added fire to melee attacks on a certain percentage of critical hits. Without first interrogating and learning a bit more information about a promoted orc, it’s just a matter of trial and error to see what’s effective and what isn’t. The orcs that are immune to certain evasive maneuvers (Vault-Proof being the most common).

In the first few hours of Middle-earth: Shadow of War, Talion’s offensive abilities are only just beginning to emerge once more. Those beginning moments when Talion only has the basics of swordplay down, even after becoming a literal legend in the first Shadow of Mordor, dial down Monolith’s combat to little more than attacking and parrying. As Talion and Celebrimbor regain their powers and level up, the tools used in the Gravewalker’s arsenal expand to offer much more options across every encounter. Each skill that Talion possesses can be upgraded with one of three abilities at a given time and can create some pretty sweeping changes to how the player engages Middle-Earth. At its core, Shadow of War’s combat should feel familiar to the likes of Bruce Wayne’s free-flow combat in the Arkham series or that of Assassin’s Creed. As Talion’s skillset expands, the tools used to slay orcs relies on far more than just reacting to the giant glowing dodge prompt above the character’s head. Mixing in short-range archery with elvish magic gives Talion far more versatility than baiting a counter-attack and mashing the attack button.

Some of the messaging mid-siege leaves some to be desired. Allied Uruk forces fighting alongside Talion often show no indication of needing assistance until they begin bleeding out on the field, oftentimes on the farthest side of the skirmish from where the player currently is. Capturing a control point is often as simple as eliminating the enemy forces guarding the point and planting your flag. With the sheer number of units on the field, each wanting to take a stab at the Gravewalker, trying to track how close a point is to be captured or even seeing that gauge in the first place can be a challenge. Couple that with trying to monitor incoming arrow fire and counter-attack prompts and the screen quickly becomes a sea of warning indicators that can be impossible to decipher in the heat of battle.

It cannot be understated how much I loved the freedom of movement and just running around the lands of Gorgoroth or Nurnen in Middle-Earth: Shadow of War. Whether fleet of foot or riding atop the back of a flying drake, getting around the landscape with some of the best traversal tools to be given in an open world game (save for Rico’s grappling hook in the Just Cause series). Running from one one Nemesis mission to the next never feels like much of a chore as the speed of movement and clambering just feels solid. Whoever made the decision to give Talion an immunity to fall damage from any height is certainly my hero.

Middle-earth: Shadow of War takes those innovations that made the original Shadow of Mordor worthy of being a Game of the Year contender and infuses a strong backbone of unit recruitment and army building. Nearly every Uruk and Olog that Talion faces across Gondor can be recruited into his army for that particular region, save for those that have an 'Iron Will' and should be shamed or dealt with appropriately. A new microtransaction system operates alongside the gear and army systems, offering players chances to purchase new gear that matches their current power level.

For the basic tiers of loot chests, Mirian, the standard currency of Mordor, is needed. These can unlock a smaller number of troops and equipment, but they have similar offerings in terms of rarity to the premium chests. As the cash market wasn't available at the time of review to purchase the premium Gold currency, I was limited to the small amounts I banked up through handling daily challenges. Sure, I purchased a couple of gold war chests and got a few legendary troops, but I could have gotten them all the same with luck and the standard tier of chests.

Middle-earth: Shadow of War feels tuned for players investing into war chests due to the sheer numbers of orcish troops that die during a siege, or weapons that constantly need to be upgraded whenever Talion levels up. However, it shouldn't matter what chests you're unlocking, as you're constantly making progress up the ranks. Taking part in online conquests (asynchronous battles where you test your assaults against whatever defenses the other player installed in their base) is another great source of high-level loot boxes and a preferred alternative to spending Mirian and gold.

For more details on the Market system in Shadow of War, check this focused article.

On the PlayStation 4 Pro, Middle-earth: Shadow of War doesn’t fail to impress. An optional 4K cutscene pack makes Talion look his absolute best on console and details from the various armor designs to Talion’s ghoulish five-o’clock shadow (you’d think The Gravewalker wouldn’t need to shave..). The draw distance on console looks impressive and stays true to the ‘if you see it, you can climb it’ mantra. Shadow of War also features a photo mode (you may need to toggle it on in the Options menu first) with all of the features and filters to turn anyone into a hobbyist war photographer.

Some missteps keep Talion's adventure from being perfect, but overall these changes are a force for good and worthy of being praised as The Bright Lord's greatest adventure yet. The changes to the Nemesis system that allow Talion to command his own army of orcish brutes and install his own overlords are a worthy evolution of a system that created something unique that no game before it had tried. Middle-earth: Shadow of War is a bright journey for Talion and Celebrimbor and worth playing if you want to go on a journey to immersive yourself in the land’s distinctive lore.

Reviewed on PlayStation 4 Pro. You can buy the game on Amazon. 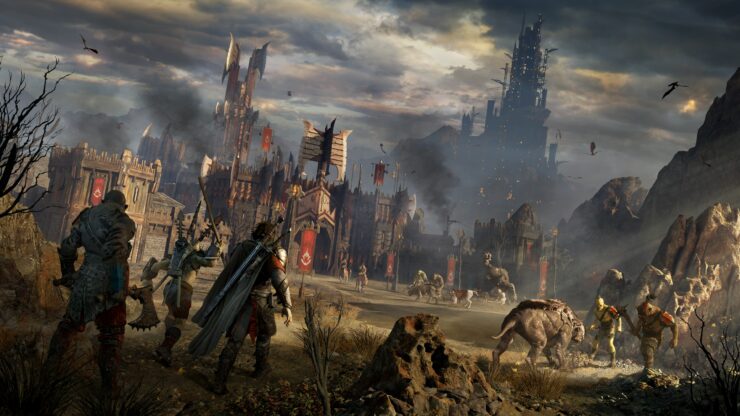 Building upon the accomplishments of its predecessor and wielding the influence of The New Ring, Middle-earth: Shadow of War should be remembered as Talion's greatest adventure to date.