When I grew up with the original PlayStation, I never could pick out who Sony’s mascot character was. Nintendo had the Mario brothers, SEGA had Sonic the Hedgehog, but what did Sony have? Among the same pantheon of Crash, Spyro and Parappa, I saw a toothless skeleton by the name of Dan Fortesque as the face of Sony. Well, at least as much as someone with half a face could be. Dan’s adventures in the first MediEvil were my first exposure to the 3D platformers of the Sony era and remained one of my favorites for the combat and exploration, even if I never got to finish it as a kid. Now some two decades later, Sony has resurrected Dan’s first adventure from the vault of forgotten games with a complete remake and overhaul of MediEvil, with some help from the creative teams at Other Ocean Emeryville.

Brave Sir Dan Fortesque, a tragic hero that was lost all too soon. After all, he was the first and perhaps sole casualty of a charge against an evil wizard known as Zarok. That alone made him a hero of his time and given a warrior’s respite in an old family crypt. When Zarok tries to come back into power, Sir Dan rises once again to face off against the foe that took his life once before. While lacking in a healthy amount of skin and muscles as well as a lower jaw, Sir Dan might not be well equipped enough to do battle with an experienced wizard, so it’s up to the player to adventure out and gear Sir Dan up for the (second) fight of his life.

Sir Dan Fortesque’s adventures take a stark change from that of the collectathon platformers that made their way onto the early PlayStation. Spyro, Crash, Gex, and others were known more for their platforming and hundreds of tchotchkes to collect by the time the adventures are done, often at the expense of combat. MediEvil flipped that formula around and made the combat its primary focus. Sure, Dan still has a number of secrets to unearth in each level, but the real collectible you’re looking for is hard-earned gold which can be used to replenish Dan’s arsenal of consumables, from arrows and spears to recharging his magical lightning gauntlet. I was a bit surprised that you still couldn’t purchase health vials from a vendor, so if you had an unlucky run and finished a level with less than a single health vial in reserve, you’re going to start your next level with the same handicap.

What Sir Dan Fortesque does have to collect in MediEvil are new weapons and upgrades that carry over into every other level. Dan’s various weapons, of both melee and ranged varieties, each have their own uses. Some are made for quicker attacks up close while others have smashing capabilities that can knock down weakened walls or dislodge colored crystals when engaging in combat against giant dragons, as knights are wont to do. Occasionally a new key item will make its way into the player’s inventory and can be carried over into future levels. I still find having persistent key items to be an underutilized aspect of platformers in this day and age, so having special keys that you can take into future levels to unlock the way both enhances the mystery and provides a bit more replayability to many of the levels if you’re trying to search for every hidden chalice to unlock MediEvil’s proper ending.

The combat that makes up the majority of MediEvil’s moment-to-moment action is a simple hack and slash affair with no flashy combos or super attacks to worry about. For the first half of the adventure, each weapon feels balanced enough to want to swap around freely, but as you unlock more chalices and in turn, more weapons to wield, Dan’s loadout will primarily shift to that of the axe that doubles as a throwing weapon or the glowing magical sword that marks as one of his final upgrades. Consumable throwing weapons, and even his shield, are all consumed with each use and can be difficult to want to use regularly. My hoarding tendencies were in full effect and I rarely wanted to use Dan’s bow until I had at least another couple of other sub-weapons in the arsenal to swap between (not to mention wanting to save all of my gold for some unknown reason). If you’re a bit more liberal in your weapon varieties, you’ll find that even the weaker throwing knives can be a useful tool against the shambling zombie types that come at you in droves.

If there’s one sore spot to the combat, it’s how easily Dan takes damage and for no good reason. For starters, Dan’s shield can only do so much. Every blocked attack takes a major chunk of durability out of the shield, so much so that the game routinely rewards the player with additional shields at a rate of at least two or three per level. Once your shield is busted, Dan takes a decent amount of damage from each attack. Worst of all, Dan doesn’t have any sort of invulnerability period after being struck in combat. If you’re surrounded or rubbing up against an enemy that can deal a high amount of damage per hit, it isn’t uncommon to get trapped and instantly lose a health vial before you can even break away. Thankfully you’re given extra health vials at a pretty rapid pace early on and can grow into a total of nine extra vials that act as Dan’s additional lives, but it’s still frustrating to have to go farm up more health after a few weaker zombies knock Sir Dan down half to death (well, again).

MediEvil’s PS4 remake is so faithful to the original source material that I was told that it’d be possible to play through the original game with the guidebook they printed two decades ago and for the most part, I found that to be quite true. Puzzle solutions and hidden chalices remain where they once were on the original release, but there’s still something new to MediEvil that people that have mastered the game before can appreciate. Some boss fights and encounters have been tweaked around to actually provide a challenge; players won’t be able to just mindlessly make their way through the final fight against Zarok any longer.

Not just new encounters make up the bulk of changes to MediEvil, but there is an entirely new set of collectibles not present in the original release. During one of the final stages of Dan’s adventure, players will stumble across a glowing chest, not unlike Pandora’s Box. Upon opening this chest, a bevvy of lost souls that Zarok has collected are released into the world. These lost souls require two things from Sir Fortesque: first to be located and secondly to offer up a task to the player before they can be laid to rest. As you only unlock these lost souls towards the very end of the game and lost souls never offer you a task in the same level that you find them in, this adds a significant amount of time to your playthrough of MediEvil. Expect to replay levels at least once or twice in order to find and satisfy each lost soul in the game (the only levels that I didn’t stumble upon a lost soul were the crypt that Dan wakes up in and the ant caves). Because the clues that lost souls give you for their final request on this mortal coil, it can be a mystery if you’re even in the right level as their request, something that I’m guilty of screwing up at least half a dozen times while trying to clear this new batch of content. Finally, once every lost soul is freed of their final attachment to Gallowmere, players are rewarded with a nostalgic treat that is worth the effort.

Controlling the camera can be like herding chickens, something that remains one of the few major qualms from the PS1 original that’s carried over into this otherwise glorious remake. Tight corridors and turning corners both cause some discomfort with controlling the camera as Dan’s field of view regularly gets blocked up or looking off in an otherwise unintended direction. During moments where precision platforming is paramount to this puckish paramour’s plight, missing the edge of a platform often leads to many an undeserving demise. Dan may not require the same dexterity that a certain PlayStation bandicoot requires in his jumps, but MediEvil happens to throw in just enough narrow ledges and moving platforms that lead to dozens and dozens of cheap deaths by the time you best Zarok in combat.

At the same time, MediEvil features a brand new camera, dubbed the Dan Cam, puts the action front and slightly off-center with a brand new camera angle. Modeled after the recent slew of Sony exclusives, the Dan Cam changes MediEvil into an over-the-shoulder action game merely at the press of a button. The very same viewing angle that made God of War such an iconic hit last year can be used by Sir Fortesque himself. Whether this is self-referential or not, it's undoubtedly a poke at Sony's lineup of recent titles that all offer a similar camera angle. It's a shame that the entirety of Dan's story can't be played with this new viewpoint (some areas are too tight a fit to change the camera angle in) but it's still worth trying out if you've seen all there is to see in Gallowmere from up above.

I never would’ve guessed that a twenty-something veteran of the early 3D graphics could be remade into one of the most consistently charming titles on a PlayStation console three generations ahead. MediEvil may not win any awards in lighting or groundbreaking graphics but Other World Emeryville has recaptured that magic I first saw when I played MediEvil on a Pizza Hut demo disc so many years ago. Sir Daniel Fortesque is still a model of what 3D can do, from the early polygons of the PS1 to the full 4K remaster on the PS4.

MediEvil is still very much the PlayStation classic that many gamers will remember from the early days. What Other Ocean Emeryville and Sony have done is give this skeleton champion one more lease on life with an adventure that’s tuned to look and play its very best. Dan Fortesque may not be one of the most notable of the PlayStation mascots, but his adventures remain timeless and can still be enjoyed by a whole new generation with this 4K remake. 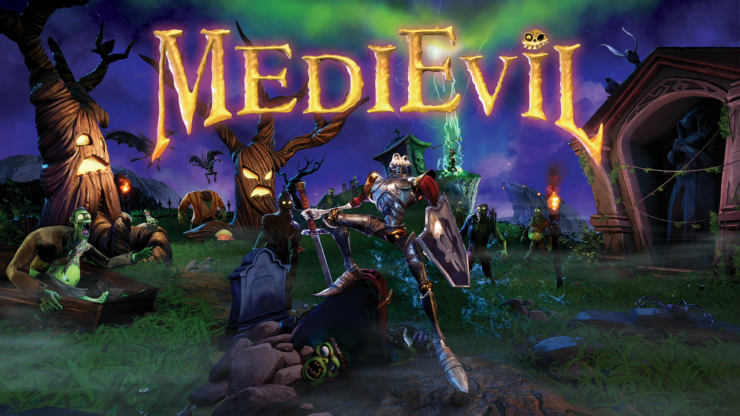 MediEvil shows that it's possible to take a classic and completely remake the look from the ground up but still make it feel as it once did two decades ago.