Once a mascot that could hold his own against the likes of Mario, Crash Bandicoot used to be the poster animal for the original Sony PlayStation. It’s been nearly twenty years since his first adventures collecting mangoes and facing off against evil geniuses in desperate need of hair growth serums.  While his first HD adventure might have been as an exclusive Skylander character alongside fellow Sony mascot Spyro the Dragon, being able to replay those golden days has been a fantasy for many a Sony fan. With the help of Vicarious Visions, Crash Bandicoot’s first three, and debatably the most enjoyable, adventures from the first PlayStation have been completely reworked for a new generation in the N. Sane Trilogy. 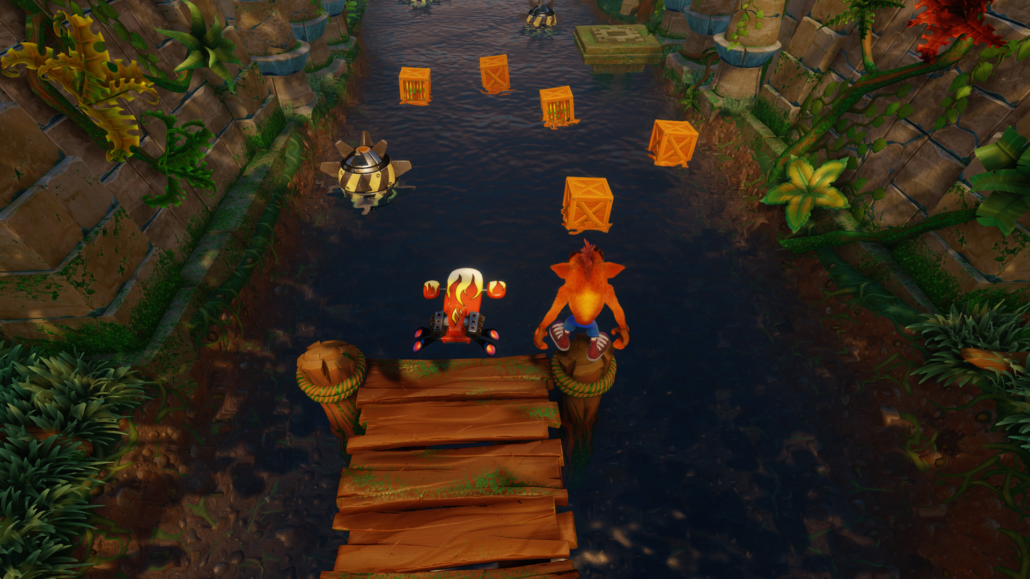 The Bandicoot’s trilogy of tales was quite revolutionary during his first foray onto the Sony PlayStation, and those heroic exploits against Dr. Cortex still hold up to this day. In a time when platformers were starting to branch out from two dimensions into three, Crash Bandicoot was experimenting with everything in between. No matter which of Crash’s three adventures in the N. Sane Trilogy you decide to start out with, each will provide a unique experience. With the exception of some absolutely harrowing bridge sequences, The High Road in particular, the first Crash Bandicoot title is the purest form of platformer. It also remains my personal favorite, even if the difficulty spikes up in unpredictable places.

Crash Bandicoot’s platforming, despite its colorful and childlike motif, is still among some of the most trying and precise in its genre. Having been built from the ground up for the PlayStation 4, the N. Sane Trilogy comes pretty damn close to matching the feel of those classic platformers with few exceptions. Crash’s jumping has some oddities that weren’t present in the original titles, such as a slight increase to falling speed and even more subtle, changing the shape of his character model from flat polygons to something rounder. 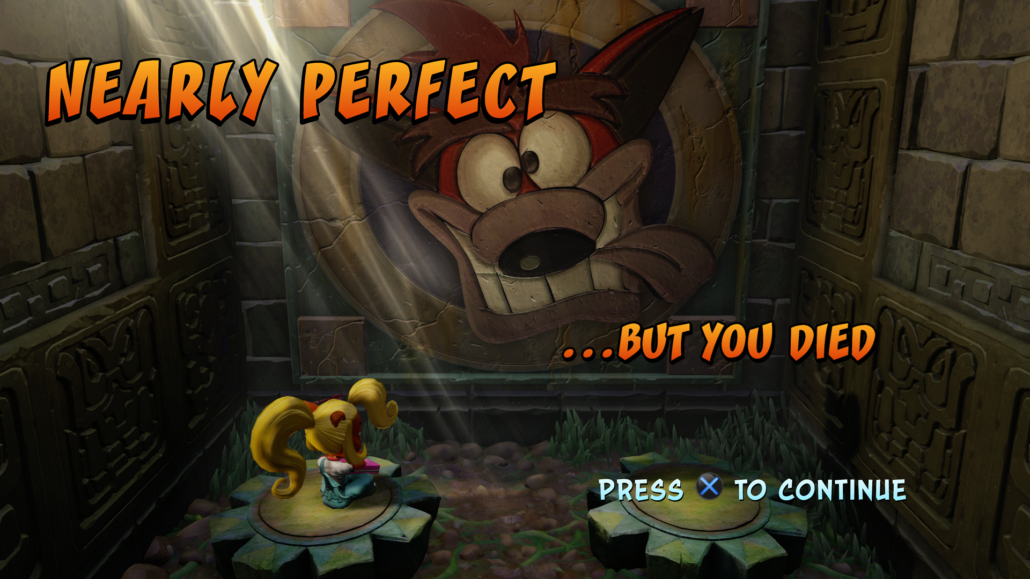 The average player trying out Crash for the first time might not notice these changes, but for veteran platformers, these minor changes can make a huge difference in nailing tricky jumps. Jumps that I thought would’ve been undershot for sure might sometimes be miraculously saved by Crash’s massive feet, although it’s usually the opposite effect and I end tumbling to my death and ruining a perfectly good speed run. It’s frustrating, but it’s really been helping me reassess and tap into those instincts I had as a kid when just about every other game coming out was another variety of platformer.

With Crash Bandicoot N. Sane Trilogy having been on the market for just a single week (and smashing sales records in the UK), chances are you’ve heard about the sheer difficulty that Crash’s adventures can take. No matter which of the trilogy you decide to tackle first, know that the first dozen or so levels can serve as an introduction to each game’s nuanced gameplay without having your hand held through tutorial after tutorial. This is primarily because each title features a wide array of environments and platforming diversity that tends to show up in two different forms in each game: an ‘easier’ first look where players are given the opportunity to try out the new mechanics, or vehicle sections depending on which of the three games you’re playing through, and then a followup level (or two) where those skills must be honed to surgical precision to make it through.

If this is your first time playing through Crash Bandicoot’s original adventures, or perhaps could use a good refresher on precision platforming, it’s actually optimal to play the games in reverse order, starting with Crash Bandicoot: Warped (#3 in the trilogy). The first adventure might be the purest experience, but without the added tools in Crash’s arsenal such as a double jump or ‘super combo’, it requires such precision that the other titles might otherwise give too much leeway in. Each act, of five in total, that Crash completes in Warped unlocks a new ability to utilize. Mastering every level and earning the crystal within unlocks a new pair of speed shoes, something highly beneficial (but not essential, provided you are amazing at timing your slides and jumps) to beating the speed run on every stage. 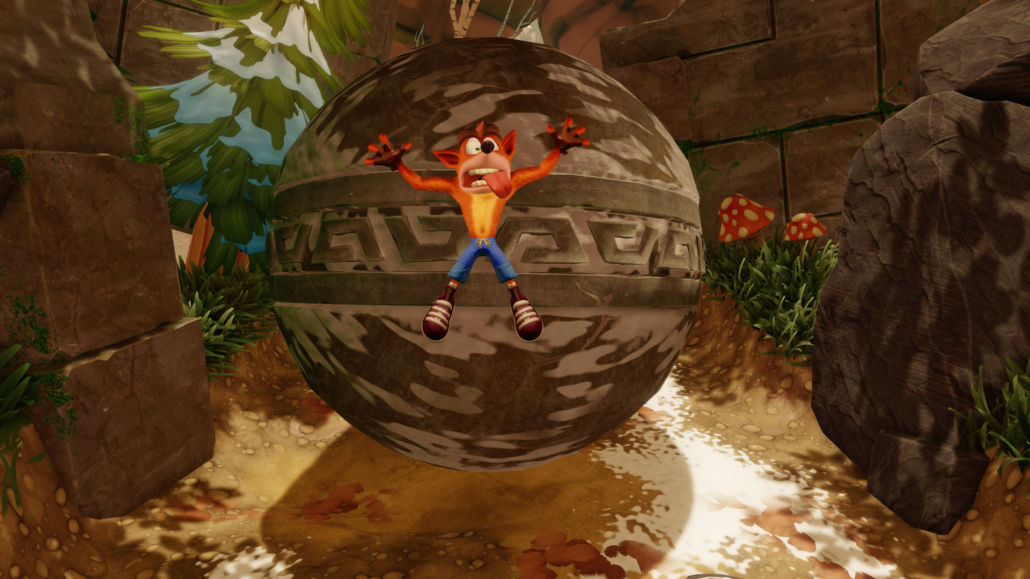 As a platformer, typically the addition of vehicle segments can take away from the enjoyment. Unfortunately, this holds true as some of the weaker moments in Crash Bandicoot: Warped in particular. Whether you’re riding the ‘Deep Apple’ underwater or on Coco’s Jet Ski, the controls take a significant dive in responsiveness and feel quite floaty in comparison to running on land. If you’re going at your own pace and explore the levels for every secret path or crate, the driving controls can be sluggish but still workable. It’s when you start racing against the clock and trying to earn an elusive Gold or Platinum relic that the controls can become your worst enemy. Thankfully, these levels are only limited to one of the three titles and are only a small part of the experience (maybe six or seven levels in total).

Value-wise, you can’t go wrong with picking up the N. Sane Trilogy. At $40 USD, getting three of Crash Bandicoot’s adventures is a no brainer. If you’re a trophy completionist, getting the platinum trophies across all three titles can easily take you dozens of hours if you’re ill prepared. Even if you’re like me and get stuck one one particular level, there’s still a lot of gameplay and secrets to uncover in the N. Sane Trilogy.

What else can I say? It looks great, it sounds great and plays great, when you’re not getting ready to throw your controller in frustration from falling off that bridge one last time. All in all, Crash Bandicoot N. Sane Trilogy is one of the best remasters I’ve played in a long while and is a must play for anyone that wants to take a trip back to their childhood. It also looks like this is just the beginning for Crash...