Marvel's Guardians of the Galaxy

When Square Enix signed the multi-year, multi-game partnership with Marvel to create games based on its prized IPs, Avengers was arguably the biggest intellectual property in entertainment. Infinity War was already on the horizon, due to launch in theaters about fifteen months later, and the hype for the hugely anticipated showdown with Thanos the Mad Titan led it to become the fourth highest-grossing film of all time at the box office. The second part, Endgame, did even better and snatched the first place from Avatar for a couple of years before a Chinese re-release of James Cameron's masterpiece reversed the situation earlier this year.

We know now that Marvel's Avengers, the game made by Crystal Dynamics, turned out to be a far cry from the success of the MCU movies. However, Square Enix has another chance to take advantage of the Marvel deal with the new Guardians of the Galaxy game. Developed by Eidos Montréal, the sister studio that worked together with Crystal Dynamics to deliver Shadow of the Tomb Raider in 2018, this is an adaptation of the galactic team of superheroes featuring Star-Lord, Rocket the Raccoon, Gamora, Drax the Destroyer, and Groot. Needless to say, despite the successful movies where Star-Lord is played by Chris Pratt, Drax by Dave Bautista and Gamora by Zoe Saldana, the Guardians of the Galaxy are still somewhat niche compared to the mainstream Marvel heroes; and yet, they will probably end up rescuing the situation against all odds.

The big difference with Avengers is that this game's structure is far more traditional. While Avengers did have a story campaign, the experience felt disjointed and confusing as both main missions and multiplayer missions vied for the player's attention on the war table, creating something of an identity crisis on what that game wanted to be. In the end, neither part of Avengers was truly satisfying to play.

Marvel's Guardians of the Galaxy, on the other hand, has no such problems. It knows what it is: a single player only story-focused title, with no whatsoever distractions or idiosyncrasies. In this adaptation, the team has only been together for a relatively short time as the whole galaxy is still dealing with the aftermath of a huge war between Thanos and his Chitauri and the Nova Corps led by Richard Rider. With the Mad Titan apparently defeated, Peter Quill (Star-Lord) assembles a ragtag team and registers them as heroes for hire, looking to get rich in the process. Needless to say, the events take a completely different turn from the team's plans as they are forced to deal with a mysterious cult that ultimately threatens the entire galaxy.

As with any adaptation, the key element to figure out is whether the creators have managed to capture the essence of the original while reinterpreting it in some ways. On that count, Eidos Montréal passes with flying colors, showing they've really understood what Guardians of the Galaxy is really about: camaraderie, friendship, and lots of humor at any turn.

The original story crafted for the game is well-written and interesting, but most importantly, each character is deeply fleshed out in a way that is consistent with what fans know of them. Over the course of the journey, they also grow a lot both individually and as a team, and players have the chance to learn more about each Guardian by engaging in conversations on the Milano starship.

One of the game's features is, in fact, the ability to choose between two (or, more rarely, three) options via dialogue trees. In theory, this is supposed to enhance the interactivity with the team and with any other characters Star-Lord comes in contact with. In some cases, it even (very) slightly impacts how the mission progresses.

Most choices don't really seem to make any meaningful difference, though. For instance, there are a couple of times early in the game when you'll be asked to agree with Rocket or another Guardian. Both times I picked Rocket, and the game acknowledged that Rocket would be grateful for Star-Lord's support in these instances, but it wasn't long at all before the big-mouthed raccoon turned against Star-Lord anyway, sparking a rift of sorts within the team. This is clearly a pivotal moment in the plot, but it does quickly show to the player that the choices are more ornamental than anything, and that's never a great thing to discover. Still, this is far from the only game where choices are mere illusions, so it's hard to hold it specifically against Marvel's Guardians of the Galaxy.

Combat in the game can probably be likened to something like Dragon Age (minus the RPG elements). Just like in BioWare's game, you'll have to manage not only your personal character but the whole team, and you can do so by slowing down time (or outright pausing it, by setting the Guardians Mode Slowdown option to 1).

Unlike Dragon Age, though, you won't be able to actually switch between your team's characters. Eidos Montréal have decided to bet heavily on Star-Lord and his leadership position, challenged as it may be early on by his teammates. As such, while the AI performs basic attacks on its own, you'll need to activate the more powerful abilities yourself via the Guardians Mode, ordering your teammates around.

It's actually very fun when you manage to discover how the various abilities of each Guardian are better used together in the various combat situations, and it does convey the feeling of a superhero team working together while also providing a tactical aspect. You can also tell your fellow Guardians of the Galaxy to take advantage of the battlefield's hazards, for example asking Drax to hurl a huge rock at foes.

Then there's the Huddle mechanic, which we previously discussed in the hands-on preview. Here Star-Lord effectively calls a timeout and, in true sportslike fashion, needs to assess the team's mood to provide them with the right motivational speech. Do it correctly (there's also an option to enable automatic success, by the way) and the whole team gets quicker ability cooldowns for a while, otherwise only Star-Lord will.

The thing is, given the relatively low challenge level, you'll rarely need it. More often than not I found myself not bothering to activate the Huddle even when it was ready to go, and that's even with the Damage Received setting on Very High (the maximum available). This is also reflected by the team's mood during the 'timeouts', where the Guardians are almost always excited to be dominating the battlefield, thus requiring Peter Quill to keep them focused. Huddle segments would have been both less repetitive and more useful in combat if the game was harder; it would have also lent more gravitas to the biggest fights.

Whenever you're not in combat, the exploration of the environments takes place in a highly traditional framework. You'll encounter various puzzles along the way, though none are anywhere near the complexity seen in Shadow of the Tomb Raider, the studio's previous title. The puzzles mostly require using some combination of Star-Lord's scanning visor, his elemental shots (ice, lightning, air, and fire, even though the latter is only unlocked very late in the game), and the unique abilities of the other Guardians.

For example, Gamora can slice even steel with her sword or climb up steep walls to give Star-Lord a boost; Drax is all too eager to open blocked paths with the raw power of his fists; Groot can use its roots to create bridges or to lift Star-Lord so that he may access something located far above; and finally, Rocket takes advantage of its small size to sneak into ventilation ports and the like to unlock rooms and other mechanisms.

Ultimately, these sections serve little more purpose than providing a respite in pace from the frantic combat. However, the constant and humorous banter between the Guardians helps a great deal in distracting the player from the otherwise fairly mundane exploration. There are also a few space shooter sections, though these are very simple and rather forgettable.

When it comes to longevity, Marvel's Guardians of the Galaxy may not have any DLCs planned, but it's already a meaty game in its launch incarnation, clocking at around 22 hours for a playthrough. Additionally, there's a New Plus Mode available as soon as you've finished the game. Most games add that with a post-launch update, so it's a welcome surprise for anyone interested in replaying with all abilities unlocked from the start.

From a technical standpoint, Marvel's Guardians of the Galaxy looks nice without being outstanding. On PC, the game supports ray traced reflections and transparent reflections. However, at least in the review build, the performance literally crumbled upon activation of the RTX feature, and not even using NVIDIA DLSS on Performance Mode was enough to prevent extremely annoying stutters. We don't know whether this will be fixed with a day one patch, but we recommend keeping RTX off; the ray traced reflections aren't even that much better looking than the regular ones anyway, at least in this game, and once they're turned off the game runs very smoothly.

For the review, we used a PC powered by Intel's i9-9900K CPU and NVIDIA's GeForce RTX 3090. At 4K resolution with everything maxed (save for the aforementioned ray traced reflections) and NVIDIA DLSS set to Quality, the game ran like butter.

The audio is perhaps one of the main highlights of Marvel's Guardians of the Galaxy. Voice acting is great across the board, and the soundtrack is even better. There's a veritable '80s hits list here, featuring immortal songs like EUROPE's The Final Countdown, Bonnie Tyler's Holding Out for a Hero, Blondie's Call Me, A-ha's Take On Me, Bobby McFerrin's Don't Worry Be Happy, and of course Rick Astley's Never Gonna Give You Up.

It's not just a fitting selection of licensed songs, either. Unlike in other Guardians of the Galaxy stories, here Peter Quill adopts the moniker Star-Lord as a tribute to a rock band that he loved to listen to as a youngster, while he was still on Earth. The great thing is, the developers actually produced an original rock album for the occasion under that label; you can find out more about that process here. Given how important music is to Peter Quill as a character, it was definitely the right choice to invest so much in everything related to audio. 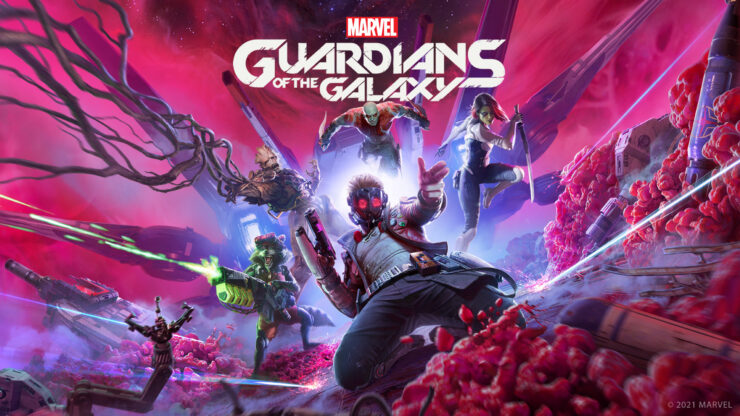 Marvel's Guardians of the Galaxy is a highly enjoyable action/adventure romp that never strays from the beaten path. You won't find any major experiments or innovations here, but you will experience a great adaptation of the beloved dysfunctional team of galactic superheroes. The story and characters are well written, the combat is fun (if perhaps a bit too easy), and the audio is excellent.