Marsback Zephyr Pro Gaming Mouse Review – It Has a Fan!

So, here's a little story for those of you who have been following my hardware reviews so far. I picked up a gaming mouse for review before I got started in Wccftech. This mouse is the Marsback Zephyr Pro Gaming Mouse. I have been waiting to get well-versed into the world of hardware reviews in Wccftech before I could review this mouse properly.

Unfortunately, I do believe that there is a lot going against this particular mouse. There are many reasons for this that are definitely going to be included in this review. However, I do believe that there are some positives to talk about regardless. So, let's begin talking about this gaming mouse and check how it compares to other gaming mice we've looked at. 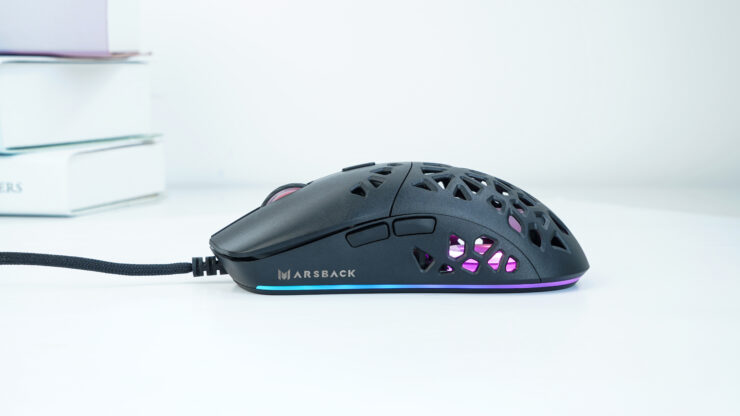 The Marsback Zephyr is a mouse that's supposed to bring a new gimmick that helps certain types of gamers. This gimmick is the selling point of the entire mouse which is the incorporation of an in-mouse fan. Let me explain: Inside the mouse, there's a built-in, RGB-lit fan that offers a cooling blast directly to your palm.

The fan essentially exists for those gamers who sweat profusely while playing games like shooters. It also is meant to offer high performance over other features such as buttons or functions. The Zephyr does have a DPI changer that can be customized through the Marsback RGB software, which I'll talk about later in this review.

Let's start talking about how effective the fan is as it's the most prominent aspect of it. I will admit, I don't have sweaty palms so I never really felt the fan whenever my hands were dry. At first, I thought it was because the fan itself didn't really work. However, once I started testing the mouse fan after washing my hands, I did feel the cold breeze of the fan drying up my hand... At first.

This is where the issues with the Zephyr began for me. See, after a while, I noticed that the utility of the fan, while neat, is quite superfluous for someone like me. This fan is also pretty susceptible to every gamer's worst enemy (especially if you live in the middle of the dirt like I do because I'm in MEXICO): Dust.

Yeah, unfortunately, the Marsback Zephyr Pro got contaminated with dust pretty quickly because there are several indentations (the honeycomb design you can see on the front of the mouse) across the device to let the air flow seamlessly. These indentations make the fan pretty hard to reach whenever I attempted to clean up the dust. Thus, I ended up with a mouse that stopped giving me a cool breeze after a month or two of use and stopped working altogether after four. 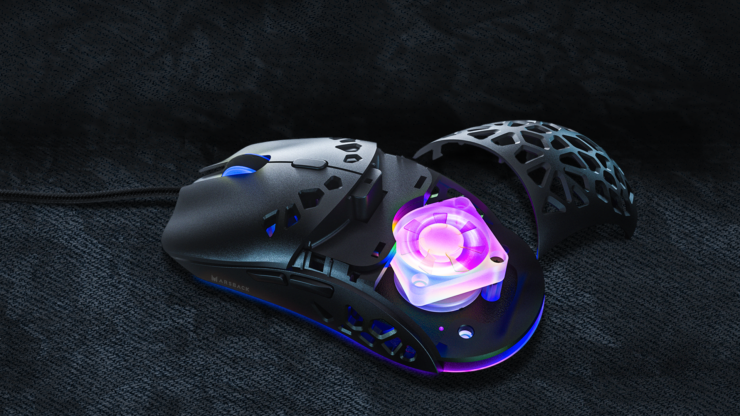 Now, at the very least I could sing the praises for the Zephyr Pro with the utility it brings. This mouse is pretty lightweight and, unlike the Roccat Burst Pro, it very much justifies its weight choice while bringing some incredible performance. Why? Because the parts themselves are pretty good compared to other mice you can find at $44.99.

Here's the cool thing that actually sells the mouse to me. The mouse has Omron switches that, not only guarantee its durability for up to 50 million clicks but also are pretty resilient. Honestly, I would've advertised this very feature more because a lot of gaming mice at the price point of the Marsback Zephyr Pro tend to be really frail, especially if they weigh 69 grams.

In fact, I'd say that the Zephyr Pro has a premium feeling to it even if it's in the cheaper range. The mouse has a honeycomb shell that helps keep the weight low at around 69g/2.40 ounces. The surface of Zephyr Pro features a delicate matte coating, which is both greaseproof and fingerprint-proof. The former of which has been great since I always had to deal with grease from my hands.

The Zephyr Pro has variable DPI. While it's customizable, you can also switch between 7 different profiles at the push of a button. By default, the Zephyr Pro has the following DPI profiles:

Unfortunately, this comes at the cost of practicality as the mouse only has 4 available buttons (6 if you include the DPI change and scroll wheel buttons). While the performance boost definitely is great, it really doesn't help someone like me who not only likes more buttons over lighter weight but also is pretty cumbersome to customize as you have very little to work with. 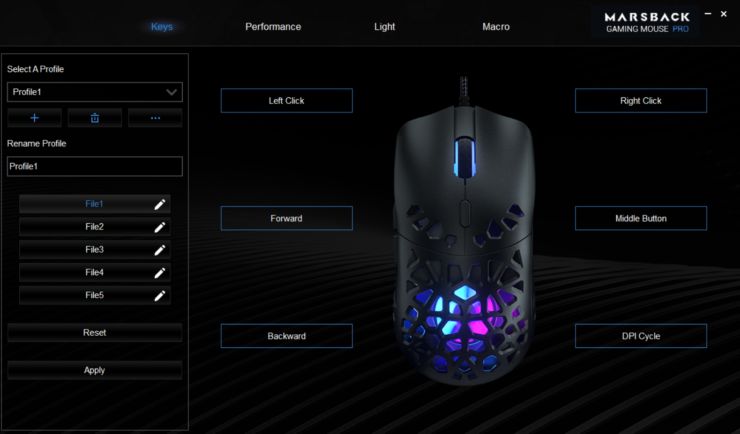 Alright, so let's talk about the software. The Marsback Zephyr Pro has its own dedicated software which you can use to customize your mouse even further. The options that are available for you to tweak with are actually far more impressive than you think. You can mess with the mouse's polling rate, scroll speed, movement speed, and even the lift-off distance.

Not only that, but you can also customize the mouse's buttons to your liking to serve a variety of functions. One of which is the Sniper Key which is pretty essential for a lot of players as of late. As I said before, you don't have much room to work with (6 buttons) but at least the customization options are pretty wide. You can also set up some macros for the Zephyr, which can also be assigned to the various buttons through the app.

It would be much better if these changes... Stuck. I don't know why but the Marsback Zephyr Pro always tends to reset the changes I make to it after a few hours of use. I thought that it had something to do with the fact that I closed the program after making my changes (because who wouldn't?) but these changes continued resetting even after I left the program on and running in the background.

This is especially annoying when you have a color scheme for your mouse or when you're in the middle of a match only to find that all of the sudden your Sniper Button stopped being a Sniper Button and proceeded to become a DPI switcher button. That has made me lose my patience numerous times. 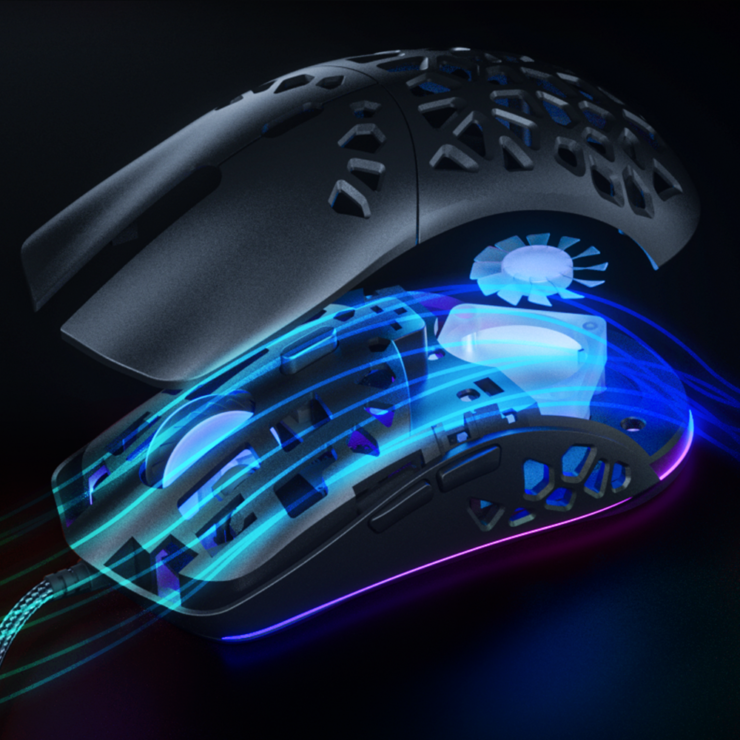 See. The Marsback Zephyr Pro Gaming Mouse has certainly made me like the novelty of having a fan to cool down your palm during lengthy gaming sessions. Unfortunately, I believe that the execution is flawed and the novelty wears thin pretty quickly. I certainly am biased against this mouse from the get-go because of my preferences when it comes to weight and the number of buttons.

I would recommend this mouse for those gamers who have sweaty palms, sure. But I believe that there's more to a mouse than that. The mouse certainly has the durability and customization options going for it but it sacrifices other things in return that make it harder to recommend for players who are looking for a higher quality gaming mouse.

That's not to say that this mouse doesn't have its pros, of course. I still think it's a neat mouse to look at and once the program gets a slight revision to ensure the changes stick, the customization options are enough of a reason to justify the price tag. I hope that Marsback takes this long-awaited feedback and uses it in its future endeavors.

The Marsback Zephyr Pro Gaming Mouse is a great offering for gamers who sweat from their palms. It has several customization options that can make it stand out from other budget gaming mice and its fan can be quite useful in clean environments.