As much as we all love competitive gaming experiences, there's something wonderful about stripping things down to the basics and just having fun with your friends. Sometimes I really want to play a fast-paced battle royale, and shoot people down while zipping around a map. And sometimes I just want to be able to play a game with friends, in the same room, and have fun. This is exactly why I love the Nintendo Switch, for since Mario Kart 8 Deluxe launched it has always given me something to play with my friends. You would think this means that Mario & Sonic at the Olympic Games Tokyo 2020 is another feather in the Switch's cap, right? After all, its the perfect kind of minigame collection to play with friends and family. The only problem is that it sucks.

Mario & Sonic at the Olympic Games Tokyo 2020 is the latest in a long line of Olympic-themed minigame collections starring Nintendo and Sega's brightest stars, and this one plays out very similarly to the others. You get Mario and Sonic's best friends together, you have them all compete in a variety of sports minigames which have a variety of control schemes available, and you laugh at the concept of Eggman doing perfect backflips and somersaults in gymnastics.

And there certainly is a sense of fun to the whole thing. Even when simply going through the character select screen with friends, imagining Vector the Crocodile getting his lights knocked around by Donkey Kong during a karate match. Each moment in the game seems primed and ready to make you smile. And even when playing the minigames it continues - you get given a very brief introduction to the basic controls, and then you must play. Just, play, and excel. Whether it's frantic flailing of the JoyCon motion controls or fumbling with your Pro Controller, there's fun to be had in just attempting to play the game. But when you know what you're doing, it suddenly becomes much less of a laugh riot.

It won't surprise anyone to discover that the selection of minigames is quite shallow. Usually, minigames amount to mashing away at the A button to start - or shaking your controller - and then pressing another button at the right time, and presto, your horse will jump a fence, or you'll row your boat, do a flip, ride your skateboard, etc. But all of them amount to the same shallow feeling minigames that just aren't very fun to play. There is more depth to each game than you are initially told, and in fact, after you play each game you are given a tip - usually something that makes the minigame you played much deeper than you initially thought, and you will have to play the game five times to unlock each tip for each game. Why they can't just tell you the exact controls from the beginning, no one knows. But even then, with all tips unlocked, you won't be having much more fun.

I was convinced to play with motion controls by a friend instead of with buttons, and I relented, figuring that playing with motion controls like a Wii Remote would be more enjoyable or fun with friends if nothing else. But of course, that was wrong. For some absurd reason, the motion controls are just awful. The game rarely knew what I was doing - heck, I rarely knew what I was doing - and it frustrated the whole experience, to the point that we quickly went back to playing with traditional controllers. When Wii Sports offered such a good motion-controlled gaming experience 13 years ago, I really thought it could only get better from there, but this travesty has proven me wrong.

There is a serviceable story mode, one where Sonic and Mario get sucked into an ancient videogame console, turn back into their original sprites, and must compete in the Tokyo 1964 Summer Games in order to escape. Here players will play through a bunch more Olympic minigames but as 2D sprites. These games aren't exactly a huge improvement over the rest of the minigames included, but their relative simplicity means they are far less frustrating and fly by pretty quickly. While Mario and Sonic make their escape, Luigi and Tails are on the outside and participate in their own variety of minigames to get them out, all while competing against Eggman Nega, who is apparently Eggman's descendant despite having a white mustache. The story mode, as a whole, is fine. Absolutely not essential, and frankly in need of a multiplayer option, but decent enough to play through once.

But once you've played through the story mode, you are just left with those minigames. I really don't want to be a miser, but there is no one minigame that is outstanding or particularly good. They are all just, acceptable, disappointing, lacking, and when they make up the entire game, well, that's pretty disappointing.

What this game needed was some sort of tournament mode, one that can be played with all four players, competing for high scores in a variety of events, and then scored at the end. It also needs events to play alongside your friends - the baton pass, maybe? The point is that a game like this lives and dies on its multiplayer offerings, and Mario & Sonic at the Olympic Games Tokyo 2020 does more dying than living. After a long, bitter play session with friends, I put on Super Mario Party instead - another game with shallow minigames - but thanks to wonderful modes and a variety of options, we loved every minute. 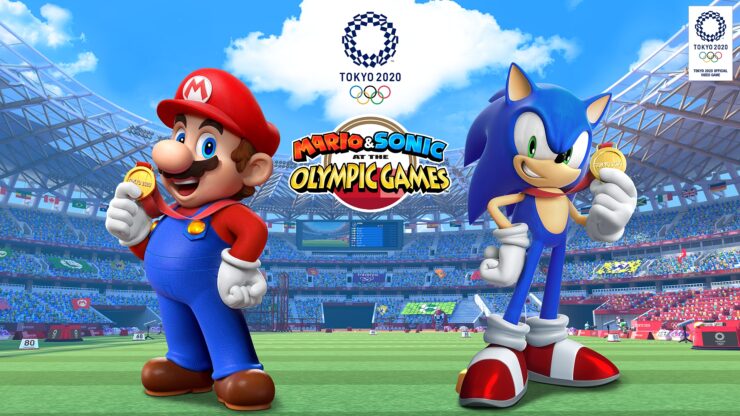 Mario & Sonic at the Olympic Games Tokyo 2020 is not a good minigame collection. While the minigames here aren't absolutely atrocious, none of them are particularly good or outstanding. Disappointing motion controls and a boring minigame selection really hamstring this crossover, and when games like Super Mario Party are available, I just can't bring myself to recommend it at all.