The unholy matrimony between Miyamoto's Mario characters and Ubisoft's ravenous Rabbids was a match few could have expected, yet somehow worked as a Nintendo Switch exclusive in the original Mario + Rabbids Kingdom Battle. Ubisoft hopes to recapture that Spark of lightning in a bottle with another similarly strategic RPG with Sparks of Hope. Can Rabbid Mario save the galaxy from the Darkmess one more time, or is all hope for capturing the magic of the original game lost?

Mario + Rabbids Sparks of Hope opens with an evil entity known as Cursa speaking vile darkness across the galaxy while capturing the Sparks that might prove to be the only way to break the curse, so to speak. As thick, goopy tentacles of Stygian Darkmess creep throughout the land, they often attach themselves to host planets and siphon away any color or energy to fuel Cursa's ambitions. The unlikely colleagues of Mario, Rabbid Mario, and others are called to action once more, taking their spaceship from planet to planet to clear away the Darkmess and bring hope to the land once more.

Nintendo Switch was the Best-Selling Console During UK Black Friday

Each planet is unique in its own way and brings some charm to Sparks of Hope, just as each 3D Mario platformer had done before. While there's no shortage of enemies to encounter or gigantic bosses to fight, plenty of diversions and side tasks are scattered throughout each planet. Even the first planet offered me around six to seven hours of content to run around and explore as I gathered every coin or Spark, shook every bush I could find, and completed any environmental puzzle that stood in my way (perhaps the only thing left to discover during my first trip to the planet was a warp pipe that required Mario to be holding twelve Sparks in order to proceed). The usual tasks that accompany any 3D Mario platformer can be found here in Mario + Rabbids Sparks of Hope: timed challenges to collect red or green coins, puzzles involving sliding platforms or elevators, and even the task to find every penguin you can in the obligatory snowy mountain biome and throw them (safely onto a pirate ship, not off of a cliff).

While more uniquely designed than inspired by Miyamoto's iconic plumber's history, the trio of composers between Yoko Shimomura, Grant Kirkhope, and Gareth Coker has come up with some catchy battle tracks to keep the player motivated between the numerous encounters they'll find themselves forced into. Certain side quests will flip the switch on nostalgia and provide the player with some remixed jams from the era of Super Mario Brothers 3 and Super Mario World that both excite and delight.

When it comes time to do battle, players will have to assemble their crew of nine intrepid fighters into a three-hero squad (although guest characters will join up for the occasional boss fight). No matter whether you prefer Rabbids or the human characters more, each character has a unique role to play on the team, and just about any combination you can come up with can be viable in some way. For much of my playthrough, I stuck to a combination of either regular or Rabbid Mario, regular Peach, and regular Luigi (who was later replaced by Rabbid Rosalina for the single target bruiser). This combination gave me a healer that could imbue the party with damage-absorbing shields just about every turn (especially as Peach used a Team Jump to get closer to the enemy with her shotgun-esque Boombrella) in combination with a character that could deal lethal damage to a single target followed by a Mario who could either strike in an AoE similar to Peach or up to two targets with regular Mario's blasters.

The combat in Mario + Rabbids Sparks of Hope is far more nuanced than simply approaching cover and taking potshots at enemies doing the same. For starters, that cover only provides a brief respite as it can easily be destroyed with any sort of attack or explosion (both Bowser and Rabbid Rosalina can be the most effective at this). After that, any partial cover only gives a 50% reduction in being struck. Between the Team Jumps and multiple dashes, there are a great number of tools that not only make getting around the battlefield a cinch but can deal plenty of damage along the way. Edge's multiple dashes can sometimes deal more damage than her regular sword-chucking attack if you can nail all of them on a single target.

To augment Mario + Rabbids' battle prowess are a new mechanic brought into Sparks of Hope: the titular Sparks. These star-shaped, Rabbid-faced extraterrestrial beings imbue the squad with unique boons (unique in the sense that there's one per boon, while there could be elemental versions of each special ability. Those sparks that can temporarily enhance weapon attacks with a chosen element will typically be found in each flavor and color, while those that offer more unique boons, such as a Health increase, might only be one of a kind. Sparks can then be upgraded through the use of star bits regularly found by completing objectives or defeating enemies in battle (while a Star Potion offers a guaranteed level increase, I would recommend saving these for a higher level Spark that might require hundreds of star bits to reach the next level). Improving a Spark's level increases the tangible numerical boosts of both its passive and active abilities, so keeping these updated on par as the team levels up is paramount to mission success.

As a friend of mine recently told me, they hate that Ubisoft found a way to make Rabbids socially acceptable. What were once screaming and chaotic versions of Gru's Minions are instead a paragon of emotion, usually singular in design for each of the characters that make the Mario + Rabbids crossover. Rabbid Rosalina has all the gusto and ambition of an angsty teenager, while Rabbid Mario is driven and motivated unlike anyone else on the team. Sure, there's still plenty of screaming and 'Bwahh'ing to be found in Mario + Rabbids Sparks of Hope, but also a richness and depth to these antiheroes that I found surprisingly charming in their own way.

Mario + Rabbids Sparks of Hope looks phenomenal on the Nintendo Switch, even as I spent the entirety of my review playing in Handheld Mode on the newer OLED model. The 3D character models feel alive with exaggerated animation and facial expressions, bringing the Mario characters that otherwise only speak in one-liner equips to life in unique ways. The environments are richly detailed while typically muted in color to allow the characters and collectibles to pop out at the player. There's a cartoony, overdramatic charm to how all of the characters react and animate, thanks in part to the infectious nature of the Rabbids rubbing off on Nintendo's cast of characters.

Whether you saved the world together in Mario + Rabbids Kingdom Battle or this is your first test of both the crossover spinoff and a tactical RPG, Sparks of Hope is an ingenious use of both IPs to create something unlike any other RPG out there. Filled with charm, explosions, and the incessant 'Bwahh'ing of Rabbid NPCs, there's a certain charm to this unlikely fusion. The smart changes to how combat plays out and capturing our sense of nostalgia once more make Mario + Rabbids Sparks of Hope one Ubisoft adventure that you don't want to miss. 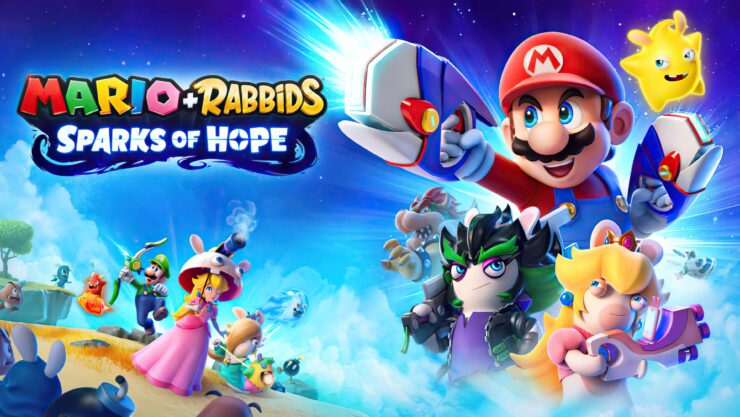 Tactical RPG fans and those that love the chaotic nature of Rabbids owe it to themselves to check out both Mario + Rabbids Sparks of Hope and its prequel Kingdom Battle for a gaming experience you won't find on any other platform. Miyamoto: Backward Compatibility Is Easier Than Ever, but Nintendo’s Strength Is in Creating New Games Not Possible on Existing Hardware

Nintendo Switch Prices Won’t Be Increased for the Moment, but Company Will Continue to Monitor the Situation