Mario has tried his hand at plenty of pastimes over the years, but for whatever reason, it seems the laidback sport of golf is the usually-hyper plumber’s favorite. Mario’s club-swinging obsession began with the NES black-box classic Golf back in 1985, and following numerous sequels on almost every Nintendo platform, he’s about to hit the links again with Mario Golf: Super Rush.

Mario Golf: Super Rush is the first entry in the spinoff series in seven years, and the first on a home console in nearly 20, so Mario’s certainly had lots of time to work on his swing. But is he ready for big his comeback? Or is it finally time to donate his clubs to Princess Peach’s latest garage sale? Time to see if this latest outing is up to par…

Mario’s golf game hasn’t changed much in many years, so it’s with some surprise I report that Mario Golf: Super Rush actually mixes things up quite a bit. The first thing you’ll notice is that the series’ traditional swing mechanics have been revamped. The swing meter is now vertical instead of horizontal and is more emblematic of what you’re actually doing as you play. How far your ball can potentially fly is now marked on the meter as well as the distance to the green and flag if you’re close enough. If you’re taking your shot from a hill or hazard, the meter will actually bend to reflect the slope of the ground.

The classic Mario Golf “3-click” system, whereby you started the swing meter, set your power, then hit the button for a final time to set your accuracy is gone. In its place is a two-click system – start the swing meter, set your power with second click (during which you can assign top or backspin) then the meter automatically refills as you character takes their swing. During this second phase, you’re free to shape your shot by applying curve to the ball’s trajectory – if your Spin stat is high enough your shot meter will be broken up into multiple sections, each of which can be curved in a different direction, allowing for crazy physics-defying flight patterns.

These new swing mechanics may seem to represent a simplification of Mario Golf’s core gameplay, until you notice the simulation line and grid that showed you approximately where your ball was going to land in past games is also gone. Now all you have access to is an overhead map with two concentric circles that show your ball’s potential carry (how far it will fly) and run (how far it will roll once it lands). You’ll have to take this into careful account, as well as wind, elevation, and obstacles, in order to determine the right shot. Getting a good score in Super Rush is no longer a simple matter of placing the yellow arrow where you want it and getting your swing timing right. Ultimately, this feels like a more natural, authentic way to play golf. Yes, each character still has a unique special shot they can unleash, but they’re not as overpowered as in past Mario Golf games, and I really only took advantage of them in specific, limited scenarios. You also have the option to play using motion controls, which work well enough but don’t quite have the pick-up-and-play appeal of a Wii Golf.

Overall, Mario Golf: Super Rush’s new mechanics may take some getting used to, but I think they’re an improvement overall, particularly in the way they really force you to get to know the game’s courses. That’s a good thing because Super Rush’s courses are top-notch. They start simple enough, but soon you’ll be using whirlwinds to send your ball bouncing over picturesque cliffs, driving between giant Pokeys, and angling your shot to avoid lava pits and fireballs. This is unquestionably the best-looking Mario Golf to date, and perhaps the plumber’s prettiest sports game period. From the sun-dappled Bonny Greens to the rainy, moody Wildweather Woods, and imposing Bowser Highlands, almost every course feels unique and memorable. The game’s audio design is a bit lacking (the squawks characters make in Adventure Mode are truly irritating) but hey, feel free to turn things down. Golf is supposed to be a quiet sport.

In terms of modes, Mario Golf: Super Rush offers up your standard stroke play, as well as a couple of fun new options. In Speed Golf, you’ll actually grab your bag and charge off across the fairway after you hit your ball, grabbing coins, powerups, and unleashing special dash moves to mess with your opponents. Speed Golf can either be played with standard “fewest strokes win” rules, with each hole having a time limit, or you can compete to see who can finish the course with the quickest time (this is a lot more fun). You could argue there isn’t really that much depth to barging around between holes, most matches are still determined by your golfing prowess first and foremost, but there’s just something satisfying about being able to fully explore courses on foot. Meanwhile, Battle Golf unleashes players in an arena where you’re free to choose which holes to tackle first. The concept is simple, but good fun for those who just want a quick multiplayer challenge.

Adventure mode also returns, bearing a strong resemblance to the one found in Mario Tennis Aces, albeit with a number of improvements. As before, you proceed through a series of matches and challenges and level up your character, but this time around there are actual interconnected hub worlds to explore rather than a simple Mario-3-style map. Wandering around these little worlds, talking to NPCs, and buying gear is largely superfluous, but it adds a nice amount of flavor to the proceedings.

A good effort has been made to vary Golf Adventure’s challenges – you’ll start off with basic tutorials and matches, but later the rules are tweaked in interesting ways. You may have to finish a front-nine under a strict time limit or an entire match on the dusty desert course without running out of water. In my favorite challenge, you’re let loose on a course and have to plot how to complete nine holes, many of them in difficult to reach areas, in only 40 shots – it almost feels like a golf version of Breath of the Wild. Golf Adventure even has full-on boss fights, which are as strange as they sound, but somehow work.

The only real criticism to be leveled against Mario Golf: Super Rush’s Adventure mode is that it’s over rather quickly. Much like Mario Tennis Aces’ Adventure Mode, you’ll be able to blast through it in around 5 or 6 hours. Super Rush feels just a bit light in general – the game launches with six courses, which is solid, but short of some past Mario Golf games, and certain single-player options like Challenges are missing. Thankfully, Nintendo is promising free post-launch updates (one of which will include a new course based on Super Mario Odyssey’s New Donk City). Super Rush may be just shy of a full 14 clubs right now, but hopefully Nintendo fills out their bag in time.

This review was based on a copy of Mario Golf: Super Rush provided by publisher Nintendo. 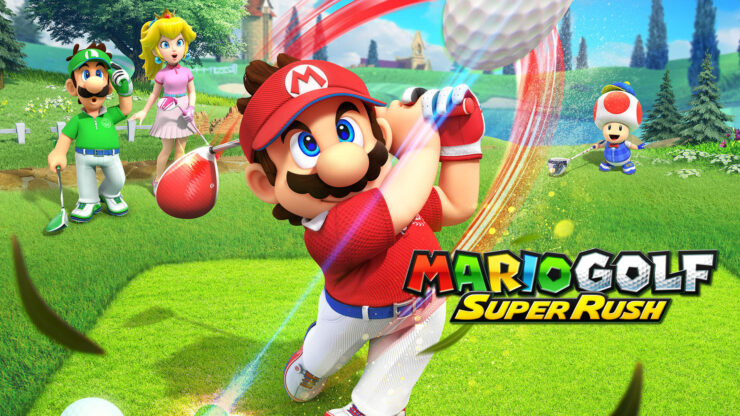 Mario Golf: Super Rush is the plumber’s best sports outing in a good long time, featuring smartly-revamped core mechanics, beautiful, varied courses, clever new modes, and a single-player Adventure full of fun twists. The game may be a bit light on content (something Nintendo is promising to address with free updates), but aside from that, Mario’s form is close to flawless this time around.