While many mouse manufacturers try to innovate across their various product lines and try to change things up in their yearly iterations, one particular manufacturer from Kowloon, Hong Kong seemingly focuses instead on making their signature design the very best it can be. That company is Mad Catz, a company I've followed for quite some time after starting my short-lived Street Fighter IV career back in '09 with their Tournament Edition fight stick. Times have changed since then, but much like the Vewlix button layout that Mad Catz adopted for that game controller, there are some design principles that don't change much over time. Take Mad Catz's latest mouse, for example: the R.A.T. DWS might be indistinguishable from their other R.A.T. mice that came before it but hiding under the hood are some incredible innovations that make this one of their wireless mice to date. 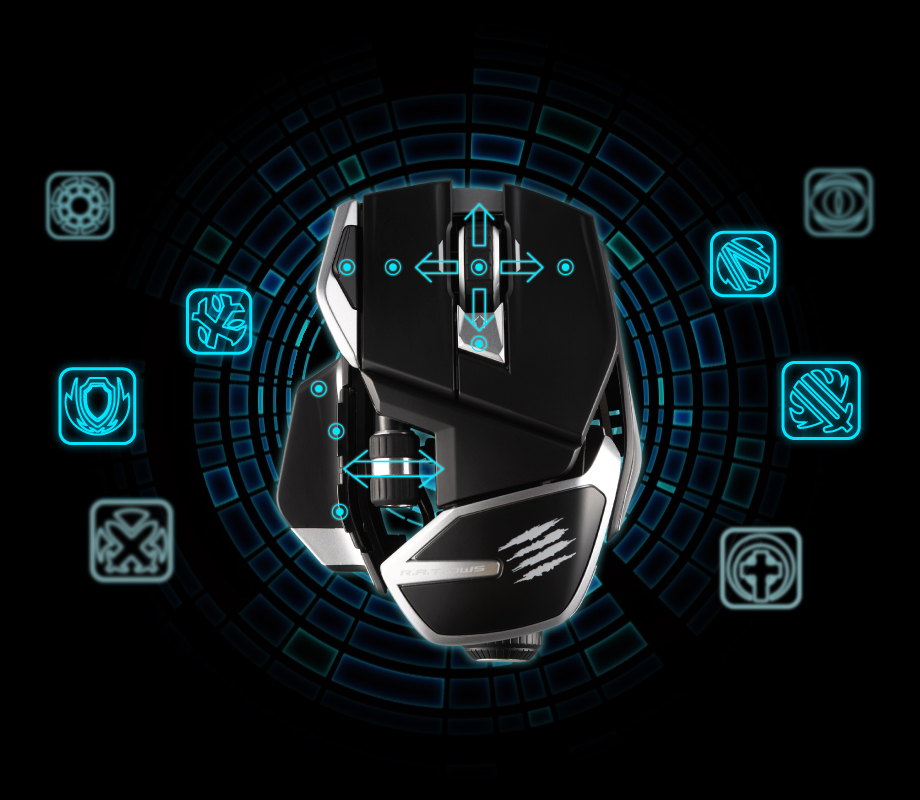 With the appearance of a Decepticon caught mid-transformation, the R.A.T. DWS follows Mad Catz's penchant to give their mouse an open-air design in the lower half. There's plenty of open space that fits their unique barrel switch and a pair of gaps between the guide rails on either side of the mouse, each giving the R.A.T. DWS its distinctive appearance. From the first R.A.T. 1 that launched in 2016 to the DWS in 2021, their core design hasn't changed much, and that's not something that I can fault Mad Catz for. It's a distinctive design that isn't quite the sweat and grime trap that I was first concerned about when I first laid eyes on the R.A.T. line.

Boasting fourteen buttons to guide the user to victory, Mad Catz' R.A.T. DWS offers no shortage of inputs. Both primary mouse buttons are nice and clicky, offering a satisfying tactile response whether you click from the tip of the mouse button or hold the mouse in a claw shape and click closer to the center of the button. Thanks to their new DAKOTA mechanical switches, the R.A.T. DWS is rated for up to sixty million keypresses. In my time spent getting hands-on with the mouse and shaking off some of that rust in Call of Duty, I think I'd be lucky to even put in six thousand clicks. From throwing it into my travel bag and setting up shop at a local coffee shop to pen this review to being the main mouse at my home workstation and everywhere in between, the R.A.T. DWS has seen its fair share of travel and hasn't even gotten a scratch on it. 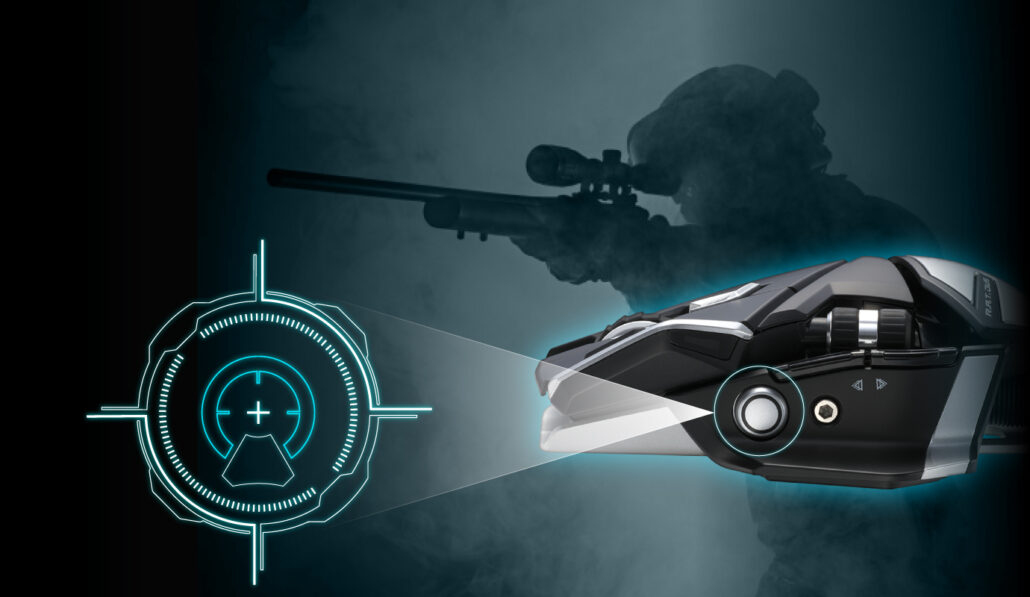 Besides the main pair of buttons and a four-way DPI selector between them, you'll also find a 3D mouse wheel with large ridges that are easy to grip against the tip of your finger without slipping away and click to either side for additional inputs. Another button is nestled just beside the left mouse button and quickly accessible if you decide to map it to melee or any other essential FPS command. At thumb's reach, you'll find a pair of slim horizontal buttons that have a raised lip just above where one's thumb might rest and their signature large rounded button that temporarily drops the DPI down to a crawl, a feature I've become quite fond of when it comes time to pick up a sniper rifle in Warzone. Mad Catz's barrel switch fits neatly into the natural gap between your thumb and index finger and doesn't come mapped to any particular input without the use of Mad Catz's app, so don't fear accidentally bumping into it when you start using the R.A.T. DWS for the first time.

You won't find any buttons on the right side of the R.A.T. DWS, nor will you find anything hiding in the palm rest. If you're finding the palm rest to be too short for you and want to turn the R.A.T. DWS into something more form fitting, a hidden lever can help pull out the palm rest out up to two centimeters out while both thumb and pinkie rests can be removed and customized through the aid of an included Allen wrench. The modular design helps craft the R.A.T. DWS into something that truly fits the wielder's hand far better than just picking up a random mouse off Amazon and hoping that it won't lead to hand cramps during hours of ill-fitting bot matches. 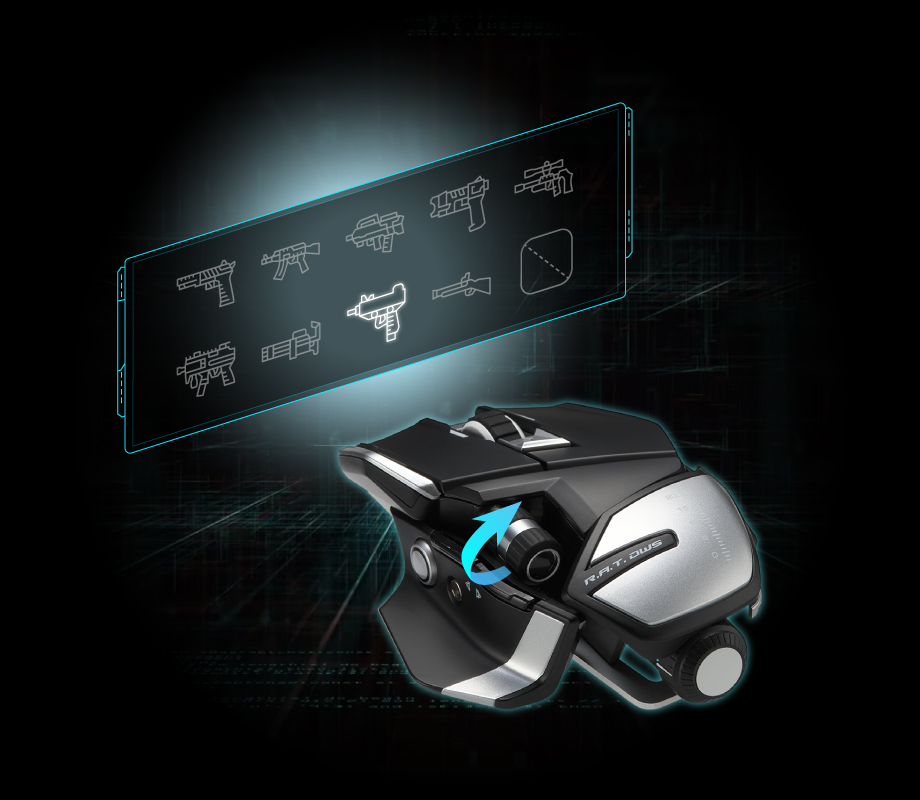 Part of the design that gives the R.A.T. DWS its unique edge is in the DAKOTA mechanical switch that Mad Catz promises to be a game-changer for its mouse line. This new mechanical switch that powers both mouse buttons on the R.A.T. DWS operates with a new mechanism that takes advantage of a new signal detection technology, as Mad Catz claims. According to Mad Catz, the DAKOTA switches can operate with an instant response between either of the two contact points that "accelerates the switch response time to within only 2 milliseconds - 60% faster than other mechanical switches". The caveat here is that the R.A.T. DWS will need to be running on 2.4Ghz wireless mode via the included USB dongle rather than the low power Bluetooth 5.0 mode but consider that to be the primary method for Mad Catz' intended audience.

With two different wireless modes on the R.A.T. DWS, you'll have a few options when it comes to how you want to connect this mouse to your battlestation. Esports professionals might shirk away from the R.A.T. DWS as there isn't an option to wire the mouse up, but I never ran into an issue with latency on the 2.4Ghz wireless mode. Bluetooth 5.0 was a bit trickier, especially on an M1 Macbook Pro. The mouse itself was just as responsive as on PC with the onboard DPI settings saved, though I lost the use of some of the additional buttons and the mouse scrolling wasn't quite as smooth as its PC counterpart.

Mad Catz might not be winning any awards for the design of the R.A.T. DWS but what they've assembled under the hood should make any PC enthusiasts eager to ditch the cords in their home office. It's a snappy and responsive wireless mouse with more buttons than you'll know what to do with and hands down one of the most satisfying switches to keep clicking over and over again.