Mad Catz is a brand that has quite a bit of history with me. My first ever gaming keyboard was a Saitek Eclipse, part of the Mad Catz family. I've also covered the company and it's fall: it was only three years ago that I covered its attempt to stop the company's delisting from the New York Stock Exchange and then it's later filing for bankruptcy. It's quite strange to now be reviewing the R.A.T. 6+ gaming mouse, but the question is if the company's peripheral range can perform the same resurrection as the company?

Judging by the R.A.T. 6+, I'm not completely sure. This is certainly going to be down to personal taste more than anything else, which could make it a very divisive piece of equipment. This is a shame because, as I'll be telling you throughout this review, it's an extremely functional mouse and offers almost more than you could ever need.

When looking at this, I'm very much reminded of the Tetsuya Nomura version of Batman or the Darksiders designs from Joe Madureira (War, to be precise). That is to say that the Mad Catz R.A.T. 6+ is over-designed.  I don't doubt that to somebody, somewhere, it looks great. Just not to me. There are too many details on the details and at first glance, it barely even looks like a mouse - unless it's a mouse slowly turning into its true transformer form?

So, the first thing you'll likely notice is what at first appear to be three wheels. There are only two, the one at the very base of your palm is actually a system that lets you increase or decrease the weight of the mouse. The other two are actual wheels, scroll wheels to be precise. You heard me right, two. So there's the regular scroll wheel in the middle of the two buttons, the second is a side-scroll wheel so awkwardly placed that I keep getting cramp in my palm & thumb.

You see, the issue is that while the length of the mouse is absolutely perfect, no matter the size of your hand, the width is just a little too small, despite it looking massive. So, you see, the side-scroll wheel is positioned in a place that means my thumb has to tuck under my second knuckle, should I want to scroll left. Scrolling right, it will tuck under there. Maybe it's me, but surely the wheel would have been better in the massive gap around the thumb rest? It would have saved me some aching.

I could be wrong and that wouldn't work though. The thumb rest is already used as the placement of a 'precision aim' button, another two side buttons and, of course, the place you rest your thumb. The precision aim button is actually placed in a lovely position, with the side buttons being well placed enough - my only issue is that they are a little small and lacking prominence.

That much can't be said about the profile switching button which, at first, I thought was a finger rest. It isn't. It's just a glaringly prominent piece of the R.A.T. 6+ that sticks up a little too much. I've already said it, but it all just seems too over-designed. The sides of the mouse are almost bolted on like pieces of armour, letting you see gaps within the mouse. Honestly, it's messing with my brain just trying to describe it. Aesthetically, I think it's atrocious and even flimsy. Contrary to what it looks like, it actually feels like a solid piece of kit. Maybe the side pieces are armour?

Adding to the actual feel of the mouse is the weights system I've already mentioned, giving a fair bit of adjustment between reasonably weighty to what can be a very light piece of kit. Personally, I have to have all the weights on because the base of the mouse is so well designed it skims across any surface like it's covered in grease. The base is a solid piece of metal, with a few pads. Strong, smooth. I'd actually argue it's perfect, offering the best movement I've found from a mouse.

In addition to the weights adding some heft to the mouse, you can also change the length of the mouse and making it more adjustable to how you like it. This is simply due to the fact that the palm-rest part is movable through simply holding in a lever on the side and then sliding, and clicking, it into the position you like it. These are impressive enough features on their own, add onto this the sheer number of buttons and wheels that I've mentioned, you get a mouse that's jam-packed full of features to play a build quality that is, simply, fantastic.

All of this is supported by the downloadable software which enables a massive amount of customisation for eleven of the thirteen different areas of function on the mouse. Quite literally the only places not mappable are the profile button and the left mouse button. Rounding off the sheer staggering number of features the Mad Catz R.A.T. 6+ comes with, you have three different RGB zones that can be altered using the software as well as four different DPI settings.

All of the features in the world don't matter if the performance is lacking in any shape or form. Fortunately, Mad Catz has ensured the R.A.T. 6+ isn't lacking in performance thanks to the components that make this mouse. The switches in the mouse have been rated at 20+ million clicks and the sensor comes in at a maximum of 12,000 DPI, with to also modify any lift-off and even allow you to hold the mouse at an angle.

The performance of the R.A.T. 6+ is fantastic. I can't say much more than that to be honest. The cursor is hyper-responsive, any move you make will be detected. Sometimes it's actually a little too quick for my liking, particularly when I'm playing games - this is despite me setting the DPI to the same as what I normally use, which I find strange. This can be countered in an insanely perfect way through the use of the precision aim button, slowing everything down. It makes for the perfect addition if you're taking a long shot with a sniper rifle.

I've used this for a good few weeks now and I would say that it feels durable with every component and button doing the job that you'd expect them to. This works in line with my earlier mention of the build quality being fantastic. Over long sessions, I have noticed a cramp in my palm and thumb, though that only comes around when I try to use the side-scroll wheel. I honestly think my hand is just too wide for it. The fact that I keep trying to use it, knowing this, shows how insanely useful it is.

Useful. That's the ideal word for the Mad Catz R.A.T. 6+. If you take away the completely subjective aspect of its terrible appearance and the very personal factor that one of the core functions cripples me, it's impossible not to praise the mouse. It's excellently well built. It's got more functions than you're likely ever going to need and the software support is pretty damn good as well. The price isn't too bad either, costing around £79.99/$79.99, though you can find it cheaper.

I can't help but be left a little tepid. I know that this is a mouse others will love and it's got all the right pieces. I wouldn't say it's a case of dysergy, just something else. I can't help but think of my review of the Lexip Pu94 where I felt like the legendary Roger Murtaugh, coming back to my initial complaint that the mouse is over-designed. I can't see why it needs so many gaps, pointy bits and a thumb rest that I could sit a cup of tea on, without fear of it falling off.

Features, durability, great components, and build quality? It's almost all there. The comfort isn't ideal for wider hands, like mine, but even this is countered by the fact that it's designed in a way that suits both smaller and larger hands. On paper, there are far more pros than cons and it should be a mouse I love. In practice, it's just not the mouse for me. 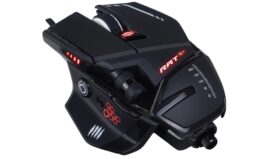 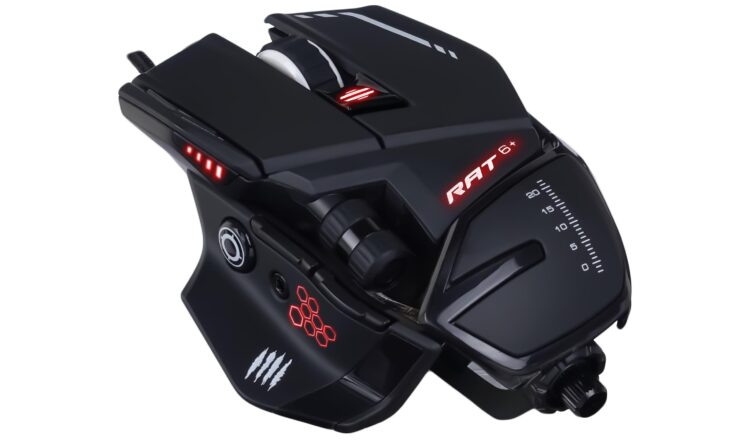 Without any shadow of a doubt, the R.A.T. 6+ by Mad Catz offers fantastic performance at a good, affordable, price and comes jam-packed with features, including a huge amount of personalisation and customisation. The main issue is the package these features and performance come in. The mouse is over-designed to the point of being ugly, with the design also creating a bit of a learning curve and some discomfort for such as myself, with wider hands, when trying to use certain features. These issues are very subjective though and I can honestly imagine some people finding this mouse to be one they'll pick up and never put down.