It’s hard not to feel at least a little sorry for Luigi. Sure, he isn’t treated as shabbily as he once was, but still, Luigi and Mario play by different rules. Mario has attached his name to plenty of so-so games over the years and keeps rolling right along, but after the original Luigi’s Mansion fell flat as a Gamecube launch title back in 2001, the green guy spent the following two decades paying for it. Sure, there were some minor games, DLC, and a 3DS Luigi’s Mansion sequel, but it seemed like another major console title was out of the question. One strike, you’re out.

Well, thankfully Luigi is finally getting another shot at bat, but is Luigi’s Mansion 3 the game he’s always deserved? Or has the quintessential younger brother underachieved yet again? Grab some batteries, it’s time to light this one up…

Luigi’s Mansion 3 opens with Luigi, Mario, and Peach (and a trio of Toads to carry their bags, naturally) on their way to mysterious luxury hotel, the Last Resort, after receiving free invites. Naw, nothing suspicious about that! Things seem great at first, but the first night in Luigi wakes to find the hotel has received a spooky makeover and in short order discovers the manager, Hellen Gravely, is in league with none other than King Boo. Mario, Peach and the rest are imprisoned in magical paintings, but Luigi is saved by his talent for running away, and so it’s on him to save the gang. Thankfully, his buddy E. Gadd was also lured to the hotel, and he’s brought some new gadgets with him.

Don’t go into Luigi’s Mansion 3 expecting a complex plot, this is basically a game-length Looney Tunes cartoon, but the game is filled with personality and great little character moments (I love what it does with Luigi and Mario’s relationship near the end). This is all elevated by a fantastic, polished presentation – this honestly feels like a preview of the upcoming CGI Super Mario movie. The game’s many cutscenes are all lovingly staged and animated and blend perfectly with gameplay. Often controls in games with really elaborate animation can feel a bit stilted, but that’s not the case here. Luigi moves like a living cartoon, but he’s still perfectly responsive. It never stops being impressive.

Animation aside, this is just a really nice-looking game in general. Sure, other games may push more raw polygons, but Luigi’s Mansion 3 really wows when it comes to mood, variety, and all sorts of little details. There’s also some solid tech at play here, as the game features some impressive lighting effects and physics while maintaining a mostly-solid framerate. The game’s soundtrack is also great and voice actor Charles Martinet turns in perhaps his best performance yet, infusing Luigi’s various mumblings with a surprising amount of nuance and emotion.

So yes, Luigi’s Mansion 3 is lovely to look at and listen to, but how does it play? At first glance, it’s the same old suck-and-blow setup, but actually, quite a bit has changed. Yes, you still stun ghosts with your flashlight and vacuum them up with the latest model of the Poltergust, but instead of just watching enemies’ HP run out, you can now violently slam them back and forth, even using them as a weapon against other ghosts. This makes the action faster and more impactful, but also adds a new layer of skill, as you can now chain attacks together to a certain degree (slamming one ghost into another automatically stuns it). Other handy additions to Luigi’s arsenal include a sticky plunger that allows you to latch onto various objects and yank away ghosts’ armor and shields, and the ability to release a burst of air that repels some attacks and briefly propels you into the air.

When it comes to exploration and puzzle solving, the most important addition is Gooigi, a gelatinous lime-green Luigi doppelganger that can be summoned at any time or controlled full-time by a second player. Gooigi can double-team switches and certain enemies with Luigi and squish through bars, pipes, and other narrow gaps, but instantly melts when he comes into contact with water. Gooigi and the game's other new mechanics add just enough complexity, without ever feeling overwhelming. The four face buttons and shoulder triggers all have their own functions, but no complex button combos or diddling around in menus is required. Clean and simple, and yet the wide variety of puzzles and challenges developer Next Level Games constructs using this limited moveset is impressive. This game will continue to surprise you right up until its end credits.

Setting Luigi’s Mansion 3 in a hotel rather than, y’know, an actual mansion, is a smart move. There aren’t many places creepier than old hotels, and the multi-floor layout of the Last Resort allows for an remarkable array of level themes. Some of the areas you’ll explore resemble something you might see in an actual luxury hotel (fancy shops, a gym, posh suites), but you’ll also run across giant plants, dinosaur bones, and a full-size pyramid and pirate ship during your adventures. Every one of 17 floors you’ll explore is unique, and, thankfully, there’s not a tired lava or ice-themed level in sight!

Every room in Luigi’s Mansion 3 is packed with interactive objects, hidden trinkets, and copious amounts of cash. There isn’t a lot of lot to spend your moolah on – you can buy Gold Bones which will revive you when you die, maps that show you where hidden items are located, and that’s about it – but collecting money is still compulsively satisfying. Puzzle design is fantastic, ranking up there with some of the very best classic point-and-click adventure games. Particular standouts include a complex, multi-stage puzzle on the Hollywood-themed floor, which requires Gooigi to interact with various movie sets that only come to life when Luigi is filming them, and the aforementioned pyramid, which wouldn’t feel out of place in a classic Zelda game. Every floor also has its own boss, all of which are unique, bursting with personality, and surprisingly challenging.

Of course, Luigi’s Mansion 3 being so varied means not every floor is created equal. A boiler-room-themed stage from the latter half of the game is rather drab to look at and sometimes more frustrating than fun. Somewhat bafflingly, it’s one of the few floors you have to visit twice. Luigi’s Mansion 3 largely avoids padding, but it does sneak in a bit here and there – in addition to revisiting the boiler room, there are also a couple sections where you have to track a ghostly cat through floors you’ve already been to. These bits of backtracking aren’t bad by any means, and only add up to about an hour of playtime, but they still feel like a drag in a game that otherwise provides such a steady flow of fun new experiences.

I’m not sure why Next Level felt any padding was needed at all, because even without it, Luigi’s Mansion 3 would be a much bigger game the original. The main story will take you around 10 to 12 hours to play through, and those who want to grab all the extra collectibles can add another six hours to that. The game also includes a couple multiplayer modes: ScareScraper lets you and up to seven online friends battle through randomly-generated multi-level mansions, while ScreamPark serves up a collection of three local multiplayer minigames. Neither mode is going to take over your life, but they’re neat bonuses. Aside from all that, Luigi’s Mansion 3 is that rare game good enough to warrant multiple playthroughs – the game may end up haunting your Switch longer than you’re expecting.

This review was based on a copy of Luigi’s Mansion 3 provided by publisher Nintendo. 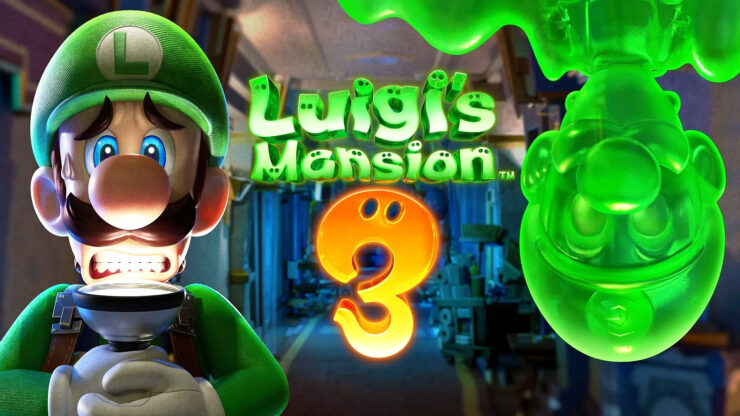 Once you check in, you won’t want to check out. Luigi’s Mansion 3 is a vibrant interactive CGI movie, beautifully-designed brainteaser, and top-notch action game, all rolled into one. The game isn’t perfect, but its frustrating moments are brief and don’t tarnish the experience as a whole. Luigi’s Mansion 3 stands shoulder to shoulder with Switch must-haves like Zelda: Breath of the Wild and Super Mario Odyssey – it’s scary good.