Three months, three keyboards. It's been interesting and enlightening, having the chance to review some of the gaming keyboards on offer from some of the biggest brands around. Corsair's offering was undeniably expensive but offered as much as you could expect for the price, at the time seeming impossible to rival. The SteelSeries offering, while not the top of their range, was affordable and more than enough proof that hybrid and a smaller price point doesn't have to result in a large sacrifice. Now comes the Logitech G815 and this is something uniquely special.

The second you open the box, you know there's something different about the Logitech G815. The keyboard is wafer-thin but sacrifices nothing of the benefits one can get with the meatier keyboards. The satisfaction of pushing down on a mechanical key, the responding feedback you come to expect from a keyboard. One would think this could be missing with a keyboard that is just 22mm in height (compared this to the Corsair at 36mm and the SteelSeries at 40.5mm), "not so", replies Logitech.

Logitech, with this keyboard, has placed in their GL low-profile switches that have a super low travel distance of 2.7mm. As you're clattering away on the keyboard, you actually get the sense that you're typing quicker. It's illusory, let's be honest about that. Still, there's a deep sense of satisfaction that comes with using something so sleek and simple, something that feels like it shouldn't be as small as it is, but is ultimately an excellently durable piece of kit.

I've mentioned about the Logitech G815 being 'small'. This is true in that it lacks height, but that doesn't mean it's small in any other way. This is a full-sized keyboard, containing number keys as well as several circular rubber keys. Four of these choose between profiles that can be set up via the Logitech G-Hub software. The other circular keys allow you to switch between the intensity of the RGB lighting and to flick over to game mode, a mode that is further customised using G-Hub to let you turn off certain keys to prevent accidental activations.

Finally, the other circular rubber keys are the media keys. These media keys are joined by a scroll wheel. Now, the function of all of these are as good as you could expect but they feel distinctly out of place in what is a premium keyboard that feels solid everywhere else. There's no feedback on from the rubber keys, nor is there any resistance, click or anything from the audio wheel. This sadly feels like an oversight, even cheap, on a keyboard that feels premium in every other way. 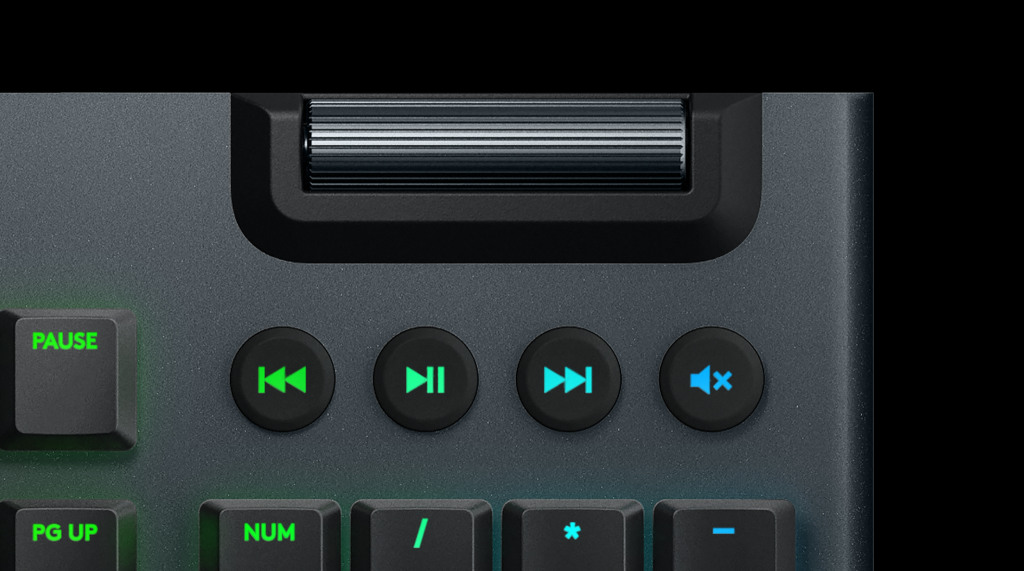 An amusing side note is that while the Game Mode is designed to reduce the risk of accidental activation of certain keys, it's very easy to accidentally activate the other additional keys on the keyboard. Along the left side, the Logitech G815 has five macro keys and the issue is that they are so close to the others that I keep pressing G5 rather than CTRL, up to a quarter of the time. Frankly, this is the biggest irritation I have with the keyboard and I can't imagine that giving the G keys an extra few mm of space would have been difficult.

So, I've said that the keyboard feels premium a few times now. I suppose I should explain why. The base of the keyboard is a solid piece of reinforced steel with a brushed aluminium top, then you have the thick, sturdy keys that are prominently raised from the body of the keyboard without actually feeling like they're at any sort of risk. Everything about the keyboard feels sturdy. It's solid and heavier than you would imagine at first glance, though the weight doesn't stop it being the most portable full-keyboard I've ever seen.

Beyond the strength of the keyboard and the vast majority of the keys, you also have a reasonably thick braided cable that ends with two USB ports. One port to control the keyboard itself and one for a USB passthrough socket, one that I was surprised to find considering the form factor of the keyboard. Honestly, there's very little the Logitech G815 has missing, I can't even honestly say I'm missing a wrist-rest due to how low the keyboard is. In close to a month of usage, I haven't once had any issues that I would normally find from a keyboard sans wrist-rest.

I'd be remiss if I didn't mention the RGB, powered by Logitech's Lightsync technology and the earlier mentioned G-Hub software. The software gives you a lot of options to choose from when personalising your keyboard. You can set the lighting per-key, set up a variety of animations or select from several preset options. Either way, with the options available and the ability to change the intensity of the lighting, you're going to have a lot to choose from.

What really differentiates the Logitech G815 is Lightsync technology, with the lighting being set based on the game you are playing. This is designed to highlight the keys you'll need and, theoretically, improve your gaming as a result. You'll not be left wanting whether you're going for something flashy or understated, the G815 looks fantastic thanks to the combination of the RGB with the very understated all-black design.

If there is an issue I can raise here, it's when playing a game at night. Lightsync sadly has it so some keys aren't showing up and you have next to no chance of telling which key is which. The RGB is essential for navigating your way around the keyboard if you don't have any external lighting showing which key is which. Still, at least this is easily remedied through the use of the G-Hub software or a simple flick between profiles.

Keeping on the topic of the G-Hub software, there are a wide number of customisation options. I mentioned the five G keys, you can create whatever macro you like and attach this to one of the keys. In addition to this, you have free reign to simply assign the key to launch any program at the touch of the key. Thanks to the fact you have three profiles, you do have up to fifteen macro keys at your disposal. 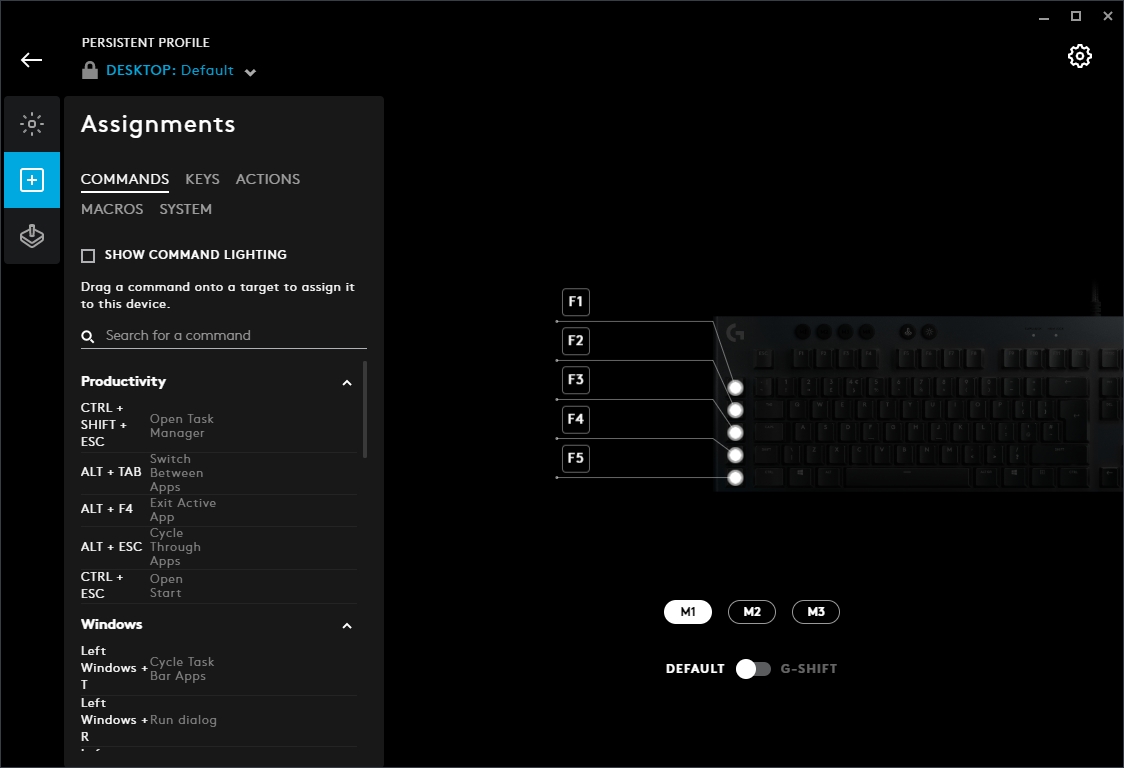 So, the Logitech G815 I've been using is the clicky version, just so you're aware. I can't speak as to how the other two versions work, which is why I haven't spoken of them. Still, I can't imagine that my opinions would differ with the tactile or linear switches. No matter the keys, the price is the same and this could be the other difficult point for the G815. The keyboard costs £169.99/$199.99.

It isn't cheap, but I can't help but think it's worth it. The durability of the keyboard, as well as the look and feel of the keys and the keyboard in general, is a standout feature. More than that, the comfort of such a low profile piece of equipment has made it more than great to use, despite the lack of wrist rest. Frankly, one isn't needed.

Build and function naturally come at a cost. The Logitech G815 is a premium piece of equipment in every sense of the word, I can't help but recommend it to anybody looking for a great keyboard.

Without any shadow of a doubt, the Logitech G815 Lightsync RGB keyboard is a fantastically designed and manufactured piece of kit. It feels comfortable, particularly thanks to the great low-profile design, and durable in a way doesn't look like it should be. It's a genuine pleasure to use, with only very minor concerns like the close proximity of the macro keys causing accidental activation. Even this can be mitigated through the use of the extensive G-Hub software, allowing you to change a wide variety of options, from the function of these macro keys in a number of ways to the RGB that can make the keyboard stand out beautifully. It's impossible not to recommend the keyboard despite the relatively high price - it's worth it.