Perfect World International has been somewhat of a common name in the genre of free to play MMORPG’s, especially on the PC platform. Now, that perception is going to be changed with the upcoming release of Livelock across all current generation platforms and PC. Developed by Tuque Games, this twin stick shooter marks PWI’s first foray into a title without the F2P attachments. As a new IP set in the growing list of titles in the genre, how does Livelock compare to the likes of Alienation and Helldivers?

Set in a world ravaged by mechanical abominations and humanity struggling to survive on its last legs, Livelock opens upon the initial acts of mankind trying to fight back against their robotic oppressors. As one of three humans that have volunteered to have their minds uploaded into robotic forms known as Intellects, these hulking cyborgs wield the power to take the fight directly to the machines and reclaim three of the world’s most influential cities: New York, Tokyo, and Moscow.

Livelock is a solid twin-stick shooter that has danger coming in from all directions. With the camera pulled above to give an aerial view, players utilize one analog stick for movement and the other for manually aiming their guns. Each of the Livelock’s three diverse classes can wield up to three weapons into battle, each with their own ammo reserves. Primary weapons can be used in any situation and don’t run out of ammo, special weapons typically offer a firepower boost against meatier targets, and launchers, well, launch heavy ordinance and have the smallest ammo reserve to compensate. None of these weapons have limitless reserves and will need to be reloaded when exhausted, and as weapons that aren’t currently in hand can’t be reloaded, sometimes moments of dodging and evasive maneuvers are required before unleashing the next volley against the enemy menaces.

Livelock’s setup of abilities and weapons can compare most similarly to Bungie’s Destiny. Each of Lovelock’s three character classes (Vanguard, Hex, and Catalyst) each offer their own abilities and weapon classes that help them each feel diverse amongst one another. In addition to having three different weapon types for each class, three different abilities can be equipped and set to use via the PS4’s shoulder buttons. No additional resource is needed for these extra abilities, instead using a simple timer countdown before each ability recharges for another use. As much of my time with Lovelock was spent almost exclusively playing as the Hex class, I grew especially fond of their ability to lay down a swath of cluster mines that were later augmented to be imbued with a slowing effect, perfect for some crowd control and giving my other teammates an easier target to shoot. 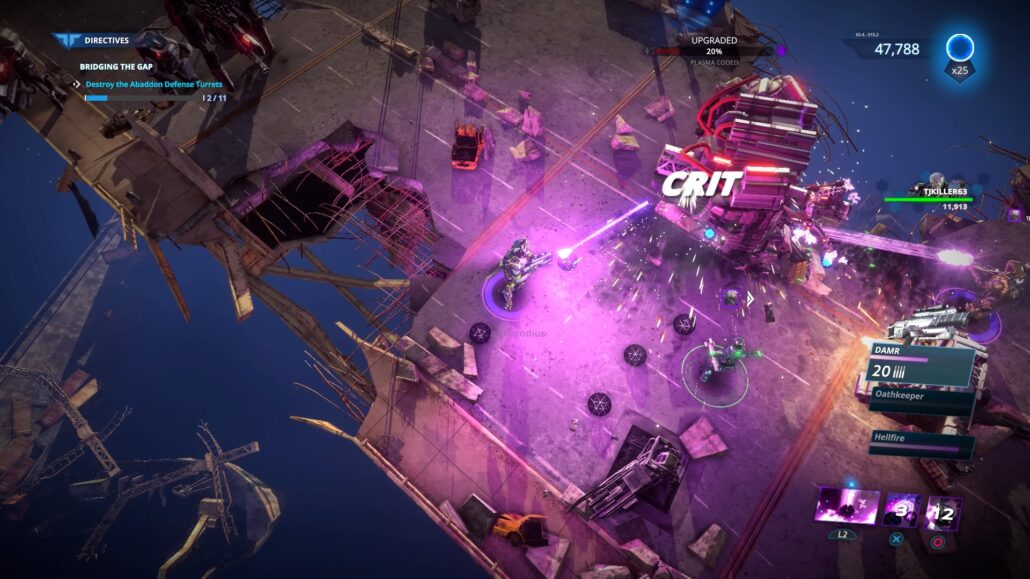 Character progression is a constant affair in Livelock and lasts for any match that the player takes part in. Every mission offers experience and Carbon (Livelock’s sole currency) rewards to boost the player’s level and upgrade their weapons, so there’s always a reason to jump into co-op and help out someone that might just be starting out. In addition to fresh weapons and abilities to take into battle, occasional cosmetics will drop in the form of helmets, armor skins, and capes. There was certainly something endearing about taking a giant war machine into battle gassed up with flannel sleeves and an emergency blanket for a cape.

As characters level up after each mission in Livelock, new abilities and weapons are unlocked for the player on a regular basis. Thankfully player levels don’t account into stats like health and attack power, so a level 30 player is just as effective as a level 1 if neither happen to invest the resources to upgrade their weapons. For most my first playthrough of Livelock, I was gaining approximately one level after every mission and never hit a point where I had to grind away to hit the next level. In just about four hours, I had a powered up Hex that was ready to take on higher difficulty missions and see where Livelock’s co-op experience truly shined.

During the more active firefights, Livelock’s console performance does take a fair hit in terms of stability. Whether it’s during moments with a sheer amount of particle effects or enemies on screen, some of Livelock’s intense moments suffer from a dip in frame rate. None of these performance hikes were game ruining but did happen frequently enough during the single player experience, with a specific wave defense mission towards the end of Act One that got especially choppy.

Livelock is a pretty great inaugural experience from the Montreal team at Tuque Games. While it doesn’t take any exceptional leaps in the twin-stick shooter genre, the blending of familiar concepts from Diablo and Destiny with the hectic action make this a fine addition for those looking for another cooperative experience to share with friends, whether they’re on the same couch or across the country.

While Livelock doesn’t take any exceptional leaps in the twin-stick shooter genre, the blending of familiar concepts from Diablo and Destiny with the hectic action make this a fine cooperative experience.