For years, Live A Live stood alongside the likes of Mother 3 as one of those lost legends of localization. Spoken of reverently by those in the know, but out of the grasps of the average player. Released by Square in 1994, smack dab in between Final Fantasy VI and Chrono Trigger, the game was every bit as ambitious as the better-known 16-bit JRPGs, but for whatever reason, it was never brought Westward. The game has built a bit of a cult audience via fan translations, influencing the likes of Undertale creator Toby Fox, but now Square Enix is bringing it to the masses via a full HD-2D remake.

Live A Live made a good first impression on me, but does it truly deserve its lofty reputation? Should you let Live A Live into your life or would this time-traveling RPG be a waste of yours? It's time for a lively discussion of the pros and cons…

Live A Live isn’t your typical 90s-era JRPG, and it immediately sets itself apart from its contemporaries by letting you choose from seven chapters, each taking place in a different time period -- Prehistory, Imperial China, Edo Japan, the Wild West, Present Day, the Near Future, and the Distant Future. Each chapter tells its own independent story and they can be played through in any order, although the meta story of the mysterious ultimate evil you’re fighting ties them all together. Each of the Live A Live’s time periods offers its own unique tone. Prehistory is a silent slapstick comedy (with a surprising number of sex jokes), Imperial China is an ode to kung fu legends and movies, Near Future is your classic giant robot anime setup, the Distant Future is a dark mashup of 2001: A Space Odyssey and Alien, and so on.

It isn’t just the tone of the stories that change, each chapter toys with how the game play as well. Edo Japan tasks you with stealthily infiltrating a castle packed with Metroidvania-style shortcuts and secrets. The Wild West almost feels like tower defense as the focus is on boobytrapping a town to fend off bandits. Present Day is modeled after fighting games with the player taking on a series bosses with Street-Fighter-style intros. Most unique of the bunch, the Distant Future is essentially a horror-tinged sci-fi visual novel.

There are some things all of Live A Live’s chapters share. All use the same combat mechanics, which combine an Active-Time-Battle-style turn system with a grid-based battlefield you can position your party on. Honestly, the system isn’t that deep, with most battles not being particularly challenging. Sections of the game that rely heavily on combat do tend to drag a bit at times. That said, while Live A Live is ostensibly an RPG, Square wasn’t afraid to completely cast off the genre’s trappings when it suited them. More than one chapter features no XP or leveling and the Distant Future doesn’t force any sort of combat on you until the very end.

As I’ve mentioned before, you can really feel the original 1994 developers of Live A Live straining against the boundaries of what a console RPG could be. While there were some scattered “cinematic” games before Live A Live, this feels like a concerted effort from Square to push the concept. Square Enix’s 2D-HD visual makeover further enhances the cinematic feel, with some wonderfully stylish moments, like the Wild West protagonist galloping across a sun-baked desert or the Edo Japan ninja hero leaping over rooftops as lightning flashes in the background. The soundtrack from the legendary Yoko Shimomura, taken to another level with new orchestral remixes, completes the package.

At this point, you may have impression that I loved Live A Live, and indeed, I was pretty wowed by the first two-thirds of the game. Unfortunately, after you play through Live A Live’s first seven chapters, an eighth time period, the Middle Ages, is unlocked, and this when the game takes a turn for the humdrum. Of course, we’ve seen this “knights and princesses” fantasy setting countless times before, and the gameplay becomes more traditional as well. Random battles, something (thankfully) largely missing from the rest of Live A Live, are suddenly introduced, as is heavy amounts of backtracking.

You actually spend two chapters running around the Middle Ages map – a first that’s already more drawn out than any other chapter in the game, and a second in which you gather all the party members from the first seven chapters. And it doesn’t end once you’ve collected everyone, as you’re pretty much required to grind through a series of dungeons if you want to be powerful enough to take on the final boss. The Middle Ages map is not that big, and frankly, by the end of the game I was very ready to say goodbye to it.

Admittedly, Live A Live does come to a properly epic conclusion which ties together all the game’s disparate timelines and stories nicely, but in the hours before that climax, I felt my attention waning. That’s disappointing, because the first two-thirds of Live A Live were so well-paced, with each chapter serving up a perfect 2-to-3-hour movie-length story that didn’t overstay its welcome. By comparison, I probably spent 6 or 7 hours trundling around the Middle Ages map. In the end, I don’t think Live A Live’s draggy final act sinks the game as a whole, but my initial spark of excitement had faded a bit by the time those final-final true ending credits rolled.

This review was based on a copy of Live A Live provided by publisher Nintendo. You can pre-order the game here. 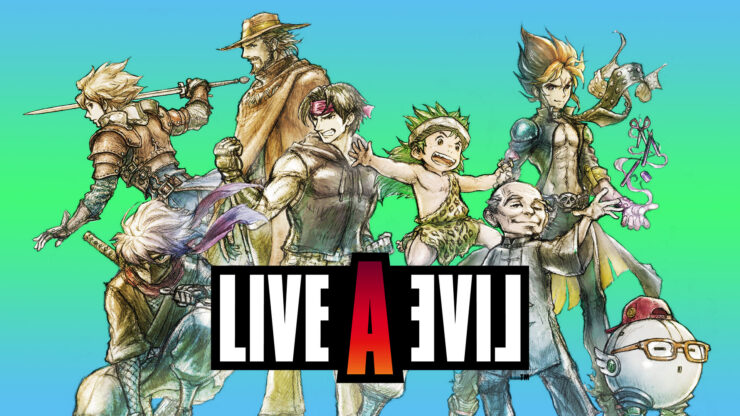 Live A Live is a fascinating lost piece of gaming history that offers up an impressively-varied cinematic saga well ahead of its time, although a slide into more traditional JRPG tropes in its third act diminishes some of what makes the game special. Live A Live is an unpredictable journey worth experiencing, but like life itself, it may leave you feeling a bit worn down by the end.