Little Witch Academia, created by Studio Trigger, has managed to find its success worldwide thanks to its quirky characters and its magical academy setting in the vein of the more popular Harry Potter. While the influence is certainly there, it wouldn't be right to label the anime simply as the Japanese Harry Potter, as it has branched off its main inspiration quite a bit. As with every popular anime around, from Dragon Ball to Naruto to Bleach to One Piece, the Little Witch Academia world has been brought in the video gaming world with Little Witch Academia: Chamber of Time, a side-scrolling action role-playing featuring some interesting mechanics, but too many flaws to become an essential purchase for those unfamiliar with the anime. 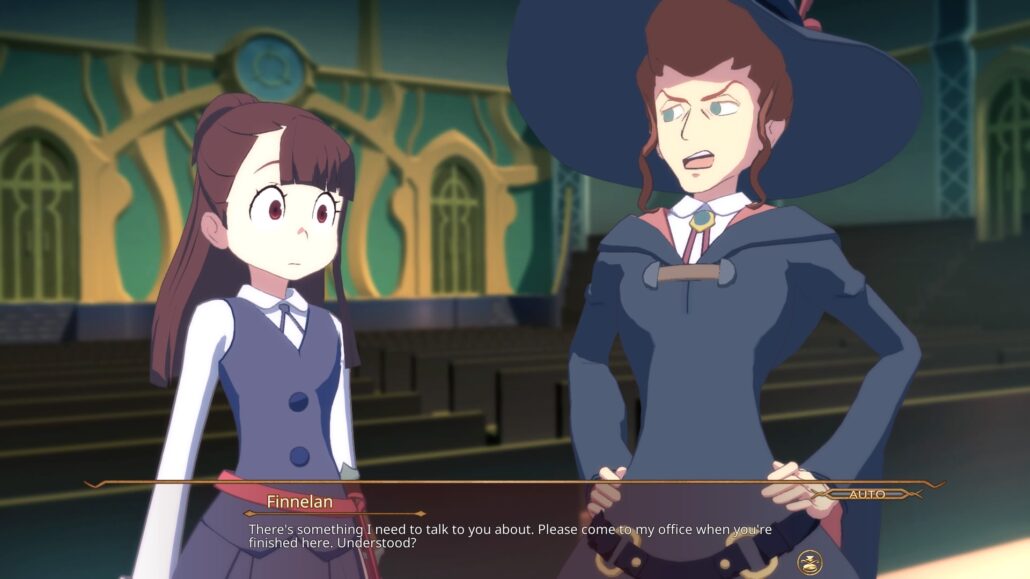 Little Witch Academia: Chamber of Time starts right before Summer vacation. Before she could start her summer activities, however, main character Akko has to undergo punishment for one of her many stunts, which are now famous around the school. Punishment involves cleaning the library and sorting all the books in it, an extremely boring task that would put anybody to sleep. During a short nap, Akko is given a mysterious book by an unidentified individual, a book that will lead to the discovery of a hidden chamber inside the library. This chamber includes a very strange clock that Akko manages to disrupt somehow, making it rewind time and forcing everyone in the school to live through the same day over and over. Eventually, some friends of Akko discover the chamber and decide to investigate the mystery to stop the time loop.

Little Witch Academia: Chamber of Time's story is not ground-breaking in any way, but it's still interesting, mostly thanks to the main characters. While they fall into the usual anime tropes, like the clumsy Akko, the arrogant Diana and so on, they are mostly well-developed and entertaining. The game also does its very best to let players know more about the main characters, with some optional animated sequences that summarize the anime's events. With all dialogue voiced, even regular NPCs', Little Witch Academia: Chamber of Time makes players feel as they are inside a few episodes of the titular anime, and this is a definite plus.

It's a good thing that characters and story are engaging and entertaining, as the gameplay experience is somewhat flawed and it wouldn't be able to carry the whole experience forward by itself. The game is basically divided into two: adventuring and dungeon crawling. In the first, players have the ability to explore the school to reach the next story quest or to discover and complete a variety of sub-quests, mostly falling into the fetch quest category. In the second, players have to explore a vast dungeon divided into several area types, avoid traps and defeat a huge amount of regular enemies and more powerful bosses. Exploring dungeons is done in a side-scrolling fashion, with players being able to control a single main character, the team leader, and two other characters. Several characters are playable, all coming with their unique set of regular attacks, divided into light, medium, heavy and running attacks, and a set of six spells, which can be customized. There's a huge amount of spells that can be learned, with some of them interacting in interesting, and devastating ways. Character customization possibilities are wider than anticipated, as it's possible to choose which stats to improve upon level up. The huge variety of loot obtained through dungeon crawling also gives additional customization options. 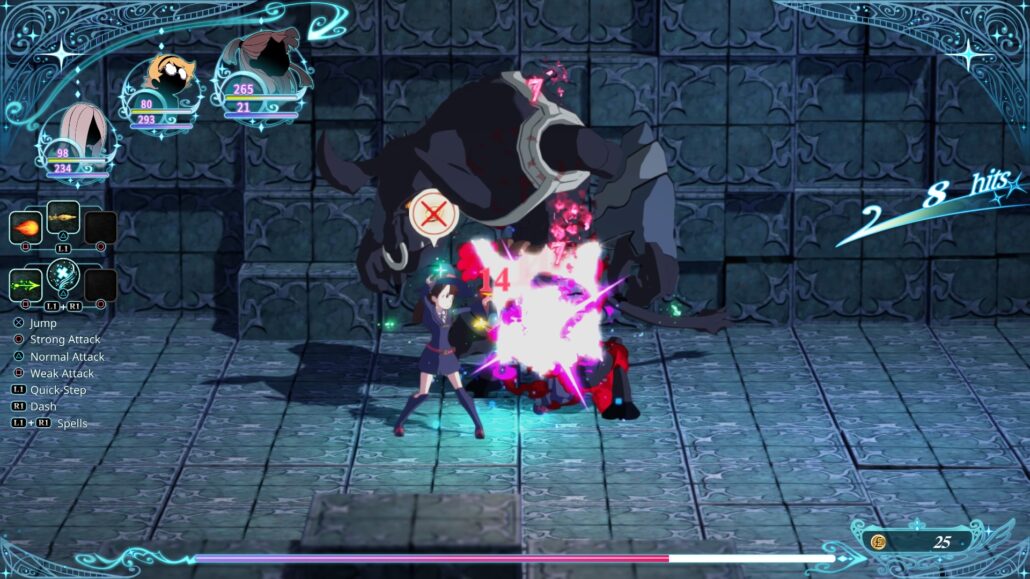 While everything sounds good on paper, the execution of the Little Witch Academia: Chamber of Time leaves something to be desired. Navigating the school while adventuring becomes annoying fast, especially when completing side-quests, as there is no quick-travel option. Hallways don't provide much entertainment, even though there are plenty of NPCs to talk to, and the fact that frame rate becomes unstable on the regular PlayStation 4 model as soon as there are more than two, three characters doesn't help.

Dungeon crawling is not any better as well. With three characters firing spells left and right and a huge number of enemies on screen, it's quite easy for things to get chaotic. Performance is terribly bad as well, making it difficult to react to enemy attacks. Controls are also an issue, as Akko and her friends move sluggishly on the battlefield, making the whole experience feel unpleasant. Dungeon design is very hit and miss as well: aside from the occasional trap here and there, dungeons are just a series of rooms connected together with no real criteria, with a main boss that must be defeated to complete the dungeon. Some of the areas also come with some annoying gimmicks that make dungeons even more bothersome. The enemy AI also deserves to be mentioned for how bad it can be, especially with bosses. More than a few times, players will encounter bosses that try to attack the player while being way outside of their attack range. It's a shame that the whole dungeon crawling aspect is so flawed, as all of the game's growth and customization mechanics could have shined in a better context.

This is not to say that Little Witch Academia: Chamber of Time doesn't do anything interesting. A couple of sub-quests, for example, take advantage of the day-looping mechanics in some interesting ways. There's a quest in particular that gets started when the damage has been done, and Akko can complete it by simply preventing it from happening when the day loops back. All of the sub-quests can be completed in a certain time window, so it can be fun to plan things around to complete as many as possible in a single day. Outside of the sub-quest mechanics, adventuring also offers some interesting possibilities with the spell potions, potions that allow the magically inept Akko to interact with a variety of objects found in the school. 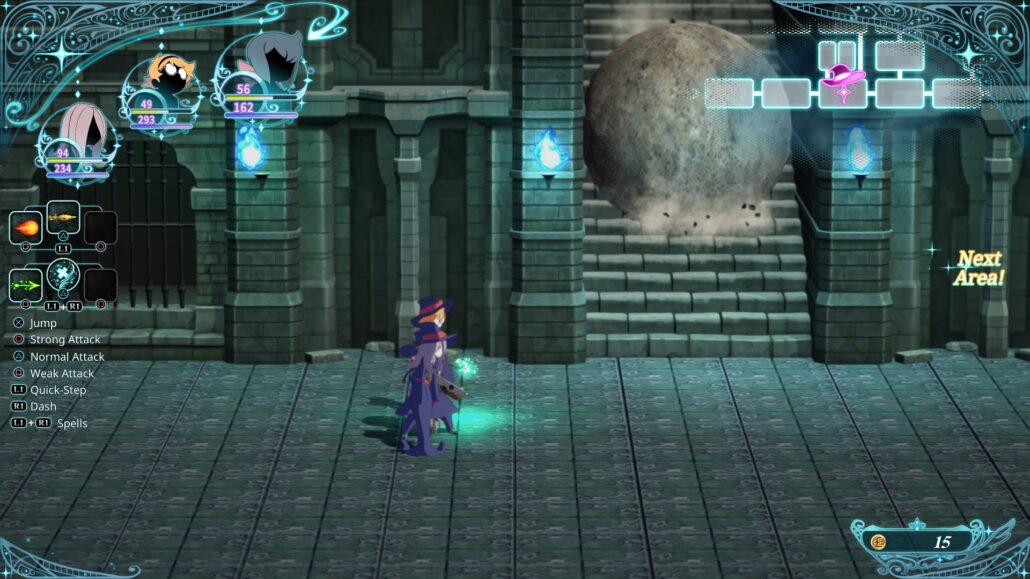 If there's one area where Little Witch Academia: Chamber of Time excels without a doubt, it's the presentation. The game employs cel-shading to recreate the many characters of the game, and all of them look incredibly close to their anime version. The heavy use of cel-shading, however, seems to be taxing on the regular PlayStation 4 hardware, as already mentioned, as the frame rate is very unstable during both adventuring and dungeon crawling. It's a true shame that performance is so bad, as the game does its very best to make players feel like they are playing through an episode of the anime, also thanks to the fact that all dialogue is voiced, including NPCs dialogue. There's no English dub, however, so there's no way out if you don't like Japanese voiceovers. Menus are also functional and clean, so players won't have any troubles during the course of the game.

With side-scrolling games like Odin Sphere: Leifthrasir and Dragon's Crown Pro on the market, Little Witch Academia: Chamber of Time doesn't have much appeal, at least on PlayStation 4, outside of the anime fans. The experience leaves a lot to be desired: there's some good here and there, but it's not enough to make the game an essential purchase.

With its charming characters and engaging story, Little Witch Academia: Chamber of Time could have been so much more. Sadly, the dungeon crawling experience is damaged by bad enemy AI, clunky controls and a terrible performance that make the experience very unpleasant. The game does have some interesting features and mechanics, as well as a well-done presentation, but they're not enough to make the game a must-have for those who aren't fans of the anime.