Little Nightmares is a game that often makes you feel helpless. You play a child in a place she doesn’t belong and everything wants to either kill you or eat you. Despite its darkly whimsical design, this is a game that is always trying to one-up itself in the creepy department.

You play a girl named Six who wakes up on The Maw, a huge ship filled with misery and death; needless to say, she has to escape. A fair warning: Little Nightmares can be unforgiving and if you’re not careful, be prepared to see this adorable raincoat-clad hero get murdered in terrifying ways.

Yakuza: Like a Dragon, Tony Hawk’s Pro Skater 1 + 2 and Little Nightmares are the PlayStation Plus Essential August Titles [Confirmed]

Little Nightmares plays as a platformer puzzle game with some stealth mechanics thrown in for good measure. You’ll sneak past murderous giants by keeping to the shadows and causing various kinds of distractions. The balance between these stealth segments and platforming keeps things fresh and interesting as you explore the bowels of The Maw.

Tarsier Studios had previously worked on the LittleBigPlanet games, so it’s easy to see where the movement in Little Nightmares might feel a little familiar. The puzzles are cleverly designed and make good use of Six’s rather small stature to provide fun ways to navigate through The Maw. Watching Six climb a stack of dirty dishes or filing cabinet to avoid capture makes each stage feel like rooms in a ghastly dollhouse of a serial killer.

The Maw is broken up into five sections that follow a neat horror motif. Expect to see a dingy kitchen, a twisted toy room, and the worst dinner party ever. Each section is gorgeously detailed but all share a twisted fairy tale look that’s both beautiful and repulsive at the same time. The Maw itself is enormous and Little Nightmares is good about showing how small of a being you actually are in the grand scheme of things.

What I really enjoyed about Little Nightmares is how well it builds tensions in each area of the ship. For example, the second section of the game has Six trying to avoid being captured by the creepy blind long-armed caretakers with short stubby legs. The arms would often pop out of nowhere and feel around for you in the dark.

The inhabitants of The Maw have these Tim Burton-esque designs that are just plain unsettling and creepy. The chubby chef twins were a special kind of scary especially when you realize they don’t really have a well-kept kitchen.

While there are aren’t jump scares per se, the tension itself really never let's go. Six is often treated the same way you would when you see a mouse in your apartment. You want to get rid of it at all costs. Little Nightmares makes you feel like that mouse. In the five hours it took me to complete the story mode, I felt uncomfortable, uneasy and freaked out the entire time.

Most of the issues I had with Little Nightmares landed on the technical side of the experience. The biggest problem (on Xbox One) were the unforgivable load times after each death. Little Nightmares will have you die a lot, so waiting sixty seconds per death feels incredibly frustrating and the result ends up killing whatever tension Little Nightmares masterfully builds up.

The controls can often feel too floaty during jumps, which makes the platforming a lot harder than it needs to be. There are sequences when you are being chased and it’s easy to get killed because you never get a good grasp on how Six moves in relation to the world. Missing a jump because the platform was on the foreground instead of the background is a common cause of death, like being grabbed by one of the ship's residents. Each monster you encounter has their own range at which they can spot you that isn’t often easy to figure outside of trial-and-error or dumb luck. In a game where you're playing hide-and-seek, being able to figure if you're truly hidden would be a big help.

As I mentioned earlier, the five hours go by fast and the game tells a really tight, well-paced story. It goes places you won't expect and by the end, you'll be happy that you saw the whole thing through. Little Nightmares doesn’t have much in terms of replay value. Each stage has a handful of collectibles but once you beat it there’s really is no reason to go back to The Maw unless you're a completionist or want to do a playthrough wearing a new mask for Six.

Frankly, I was pleasantly surprised with what Tarsier Studios was able to do with Little Nightmares.  It does new things with the horror genre that focuses less on gore and jump scares and more on tension and weirdness. So, if games like Inside or Limbo got you excited then you'll want to give Little Nightmares a try.

Reviewed on Xbox One (code provided by the publisher). You can buy it for PlayStation 4 (physical copy), Xbox One (physical or digital copy) via Amazon. 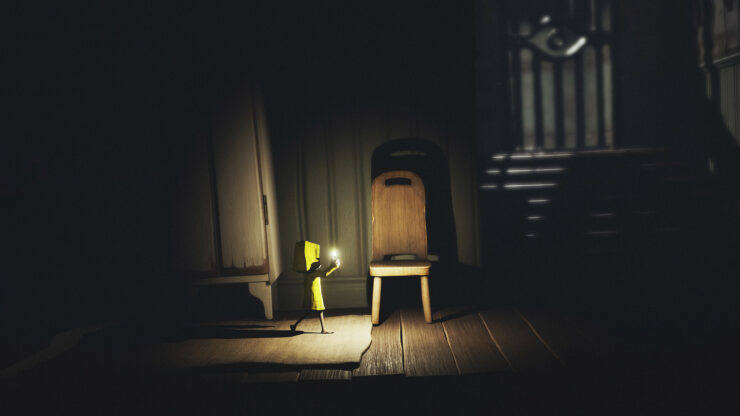 Little Nightmares is a freshly scary experience that feels like a gothic storybook come to life despite some technical hiccups and awkward controls.