At this point, the Lego version of the DC Universe has been pretty thoroughly explored. Over the course of three Lego Batman games, developer TT Games has tackled Gotham, the wider DC Universe, and even outer spaaaace, so what’s next? Well, how about a change of perspective?

Lego DC Super-Villains flips the script, letting players take control of the DC Universe’s extensive cast of bad guys. The move makes a certain amount of sense given the popularity of characters like The Joker and Harley Quinn, but putting the spotlight on the bad guys is still a somewhat risky proposition for what’s ostensibly a kid’s game. So, does the gambit pay off? Does Lego DC Super-Villains manage to freshen up the formula, or is the game bad in more ways than one?

Lego DC Super-Villains introduces you to its most significant new feature as soon as you start your game. For the first time, you can create your own character, which you play through the main story with (previous Lego games only let you use custom characters in free-play mode). Character creation is relatively simple mix-and-match affair, but it feels true to the Lego spirit. Annoyingly, a large portion of the character creation parts aren’t available to begin with – I get that unlocking stuff is a big part of Lego games, but it doesn’t feel like you’re truly free to be the kind of villain you want initially. Would I have ended up with the afro, monocle, and sweater-vest-sporting, half-man, half-lizard menace known as Dr. Deathosaur if I’d had more character creation options to start? Maybe, maybe not.

Unfortunately, once you jump into the game proper, you’ll soon realize you kooky custom villain isn’t really the star of the show. Bigshots like the Joker and Lex Luthor still drive the plot – your guy/gal mostly just hangs around in the background looking goofy during cutscenes. You character is the only one who can gain new powers, which eventually transforms them into a bit of a beast, and they do play a key role near the end of the game, but for most of the story they’re just along for the ride.

Lego DC Super-Villains’ story, which is largely based on the 2013 “Forever Evil” DC event, serves up boatloads of fanservice and a decent twist or two. That said, the game’s childish humor never wrung more than a smirk out of me, and the plot is probably too complex for the game’s young fanbase to follow. The story has its moments, but I’m not entirely sure who it’s targeted at.

If you can look past the slightly-hacky writing, Lego DC Super-Villains’ cutscenes are generally well done. TT Games’ Lego titles have come a long way – intentional blockiness aside, this is a nice-looking game. The game’s audio also impresses with a solid score and a stacked voice cast, featuring fan-favorites like Mark Hamill as the Joker, Kevin Conroy as Batman, and Tara Strong as Harley Quinn.

Gameplay is exactly what you’d expect if you’ve ever tackled a TT Games Lego title before. The story is broken up into a series of chapters, each of which begins with a trip through the game’s open-world hub, followed by a more traditional linear mission. The open world contains a decent variety of locations, including Gotham, Metropolis, Smallville, STAR Labs, and Slaughter Swamp, but, overall, it’s rather limited and not terribly fun to explore. Vehicle controls require special mention, as they’re literally some of the worst I’ve ever encountered. Typically, I beelined straight to my next objective without stopping to explore.

Missions are a combination of very basic platforming and brawling (just mash the square button and you’ll be more than fine) and some slightly-more-involved puzzle solving. You usually control between 3 and 5 characters, each of which has a unique power or two that you’ll need to use to get past specific obstacles. At its best, Lego DC Super-Villains feels like a simplified version of an old-school adventure game, with objectives requiring multiple steps and powers. You’ll never be at a loss for what to do, as the game outright tells you which characters to use in each situation, but there’s still something rewarding about unraveling the more complex stages. Less satisfying are the game’s actiony bits -- there’s no punishment for dying aside from losing a few of the studs that fly out of literally every object in the game, making the brawling feel pointless. This split extends to the game’s bosses. The ones that focus on action are a bit of a chore, but some, like your battles against Poison Ivy or Sea King, are basically elaborate multistage puzzles. These more in-depth boss fights are the highlight of the game.

Unfortunately, Lego DC Super-Villains’ highs are too often tempered by glitches and other polish issues. While I never encountered anything game-breaking, general wonkiness (characters getting stuck on stuff, messed-up AI, missions not progressing properly) was common. I also had the game crash on me a couple times. Lego games have always been glitchy, and, honestly, Super-Villains isn’t as bad as some past titles, but it’s still rougher than it ought to be.

Lego DC Super-Villains’ story can be completed in around 10 hours, but, of course, there are countless characters to unlock and doodads to collect. Lego games are basically designed to be replayed ad infinitum by young children, and this is one of TT Games’ deepest offerings yet. Buy your kid Lego DC Super-Villains for their birthday, and they may not need another game until their next birthday.

This review was based on a PS4 copy of Lego DC Super-Villains provided by publisher Warner Bros. Interactive. You can purchase the game for consoles on Amazon or for PC on Green Man Gaming. 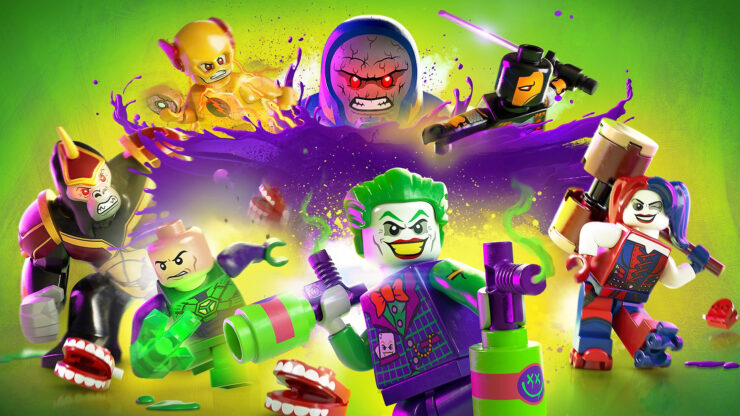 Lego DC Super-Villains doesn’t shake things up that much, but it doesn’t break anything either. Ultimately, above-average level design and a dizzying amount of DC content mostly make up for the game’s bland action and lack of polish. Lego DC Super-Villains might not have the chops to take over the world, but it may conquer a surprising amount of your family’s free time.