It’s a tough time for new first person shooter games these days due to fierce competition. With great games like Overwatch and PlayerUnknown’s Battlegrounds to contend with, it’s no wonder why quality titles are selling below expectations. Boss Key Productions, led by industry veteran Cliff Bleszinski, have released LawBreakers at the budget price of only £25/$30. With zero gravity combat on its side, can this frantic arena shooter do enough to convince players it is worth playing?

LawBreakers differentiates itself from most FPS games out today by ramping up the speed of the combat to the levels seen only in the Unreal Tournament and Quake series. This might not sound like much to old school PC players, but this hectic style of shooter will be alien to most console players. With the blistering speed comes a steep learning curve, and it seems shocking to me that Boss Key Productions didn’t put much effort into teaching players how any of the classes work. There are YouTube videos detailing the abilities of each of the classes, but that isn’t good enough for a game where each role is surprisingly difficult to master.

There are nine classes, each equipped with their own unique abilities, weapons and of course, unlockable outfits via the tried-and-tested loot box system. Boss Key Productions have opted to go for a smaller cast, focusing on balanced gameplay over having weaker classes being completely ignored. Each class can seem overpowered in the right hands but at no point will players ever feel cheated. Picking up any of the characters in this game is no easy task, requiring hours of gameplay to somewhat learn them. When you finally start to understand each of the classes and how the game should be played, it’s easy to see LawBreakers’ true potential.

Instead of the generic Team Deathmatch modes, LawBreakers opts for a rather unusual approach to the genre. Blitzball requires players to work together to gain possession of the EURO Ball and take it to the enemy base in order to score a point. The first team to score eight points wins. This may sound relatively straightforward, however, players in possession of the ball will only be able to carry it for a short period of time before the Shot Clock reaches zero, at which point, they will die. Factor in ten players all scrambling for one ball and you’ll begin to understand why this frantic mode is so fun.

Ever had to work with a team of people to charge a battery? Boss Key Productions has found a way to integrate that into LawBreaker’s modes too. Here, players will have to acquire the battery, charge it to 100% at their base and defend it for twenty seconds. Once a team has fully charged the battery three times, they win the match.

Most players will be familiar with Turf War, a mode where players will have to fight as a team to capture three zones across the map and score points to win the game. Finally, the newest mode, Uplink, requires players to battle for control of the Uplink. Once in possession, the Uplink has to be taken back to the team base in order to download important data. The team that manages to do this three times wins. I found that as the game is so fast paced, most matches lasted roughly ten minutes. In addition to the matches being short, they are also picked at random, leaving little time for players to get bored. Of course, this could become frustrating if a player particularly favors or dislikes a specific mode however, it’s a good way to acclimate people to all of the modes and maps at once.

As I mentioned earlier, LawBreakers has a steep learning curve when it comes to mastering each of the classes. This is arguably the game’s biggest downfall; if it’s too difficult for players to learn a class to a high standard, they will never get to experience the game in its true form. It would’ve been great to see Boss Key Productions include some challenge maps to ease players into some of the more difficult classes.

The biggest obstacle for people wanting to play LawBreakers has to be the low player-base. This isn’t something the developers have any control over but it does have an effect on deciding whether the game will be worthwhile in the long run. I’ve played a few games where the teams have been unbalanced due to teammates leaving all of a sudden, and in some instances where a team loses a player in the opening minutes. I can’t say this happens too often, but if this is happening within two weeks of the game launching, who's to say it won’t get worse from this point onwards? As of right now, I don’t think the small player-base (around 1,000+ players on Steam) should deter people from picking up LawBreakers. If this figure halves in the next two weeks, I’d imagine Boss Key Productions will have a big problem on their hands.

LawBreakers runs on Unreal Engine 4 which ensures smooth and consistent performance. Not only does the Unreal Engine 4 provide excellent graphical results, but it is also clear that the developer created this game with the PC audience in mind. Due to the fast pace of the game, Boss Key Productions have appealed to players that prefer to play at higher refresh rates. Players should easily be able to hit 144Hz or more on Medium settings (using a GTX 970), and it’s possible to reach as high as 240Hz - which is a nice bonus for those with capable monitors. Unreal Engine is also scalable, so players with lower spec PCs won’t miss out.

While LawBreakers isn’t the most popular game on Steam right now (though Cliff Bleszinski isn't worried about it), it’s not something you should ignore. For FPS fans clamoring for something new and innovative, you have finally got what you’ve been asking for. If you are looking for a game with a high skill-ceiling that tries to bring new ideas to the table, definitely consider picking up LawBreakers.

Reviewed on PC (code provided by the publisher). You can buy it for PlayStation 4 via Amazon. 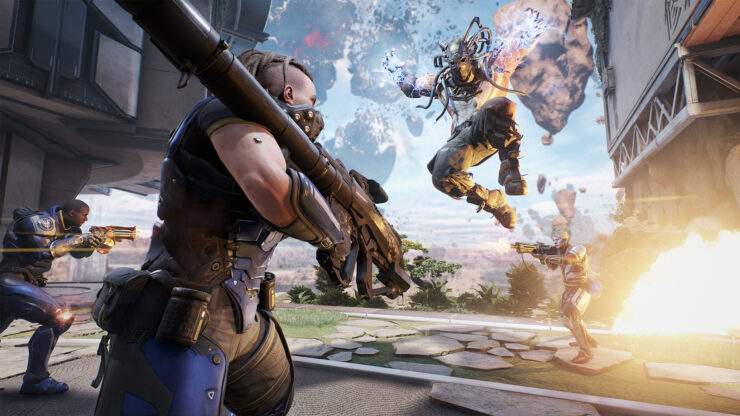 While LawBreakers isn’t the most popular game on Steam right now, it’s not something you should ignore. For FPS fans clamouring for something new and innovative, you have finally got what you’ve been asking for. If you are looking for a game with a high skill-ceiling that tries to bring new ideas to the table, definitely consider picking up LawBreakers.