Kingston might be the king of the DRAM world, but its SSD offerings have been... well a little off. While most of the top performers were using SandForce controllers, Kingston was stuck JMicron, which was not exactly a speed demon. 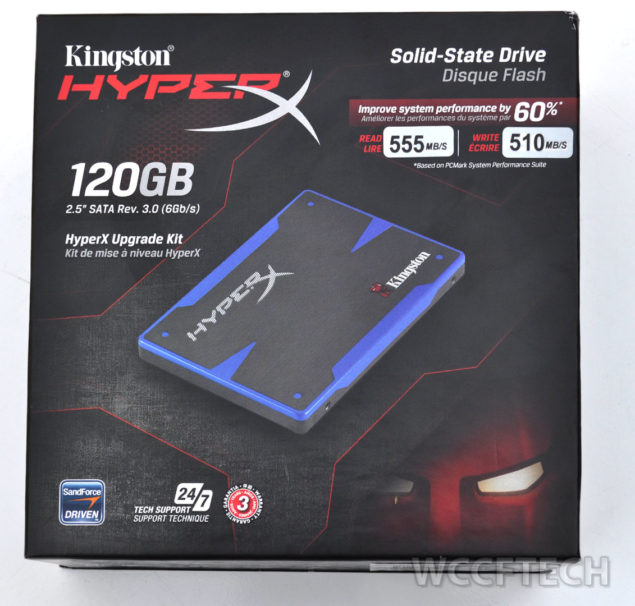 Not anymore. Kingston’s latest foray in the SSD world is powered by the latest SandForce controller the SF-2281. For a recap of what SandForce offers in its controllers please read our SSD primer. The SF-2000 series builds upon existing SandForce technologies (on the fly compression, RAISE, AES encryption) and adds SATA 3.0 support among other goodies. Suffice to say SandForce powered drives were fast and now are even faster.

Today we’ll be looking at Kingston Hyper-X 120GB SSD powered by the SF-2281 controller. The controller is paired to synchronous ONFi (Open NAND Flash interface, open standards for NAND flash memory developed by ONFi consortium) MLC NAND from Intel. There is no cache memory here as SF powered drives do not need this.

The specs of the drive as listed by Kingston are as follows:

The ‘upgrade kit’ comes in a study cardboard box. Inside the box are the drive and several other goodies neatly packed in foam.

Kingston not only packs the SSD in the box, but also an external USB box, screw driver, cables, bracket for 3.5” conversion as well as Acronis HD cloning software.

Kingston’s price premium over similar SF powered drives is pretty justified considering that it throws everything you’ll need to setup the drive according to your needs (in or outside the computer).

Kingston uses custom made Allen bolts making it impossible to open the drive (short of break it).

Externally, this is one of the best looking SSDs and mirror the styling on Hyper-X branded RAM.

The styling continues on to the external box as well as the screw driver set. From the bland V-series SSDs to the stunning Hyper-X series, Kingston has made strides in its SSDs at-least aesthetically.

You might think that WCCFTech is crazy in comparing  SF generation 1 and 2 drives. The idea  here is  to show how things have changed over a generation.

The Random read and write performances (QD32) when sending multiple commands to the drive (Native Command Queuing with 32 command depth) shows how well the performance scales. The sequential tests use the default block size of 512KB. While Random tests use a block size of 4KB

This nifty little tool emulates real life file copying to the SSD. We have already seen what the drive can do with compressible data (thanks to on-the-fly compression SF powered drives generate impressive numbers as seen above). Now it is time to see how the drive will cope with real life emulated data.

As you can see the numbers are nowhere near as impressive looking as before. This is more indicative of real life performance of the drive. Nothing to be ashamed of, rather lots to be proud of.

The drive is fast, really fast. Kingston’s has finally got on the SandForce bandwagon and has produced a drive that is zippy. The upgrade kit that we reviewed today comes with an external USB 2.0 box. This will come in handy for users who want to use this drive on the go.

You can’t go wrong with this upgrade kit. It is one of the best and most complete offerings based on the 2281 controller.

One of the fastest SSD (capacity category)

Price (but as always, you get what you pay for)