Some games deserve a second chance more than others. And if there is a role-playing game from the PlayStation 3 and Xbox 360 generation that indeed deserved a second chance, it's Kingdoms of Amalur: Reckoning. The action RPG originally developed by Big Huge Games had everything a great fantasy role-playing game needs to be great: deep lore, engaging characters, a huge world to explore filled with items to loot and tons of enemies to defeat, intricate yet simple to understand mechanics and an action combat system that is, still today, unrivaled in terms of versatility.

Despite the high quality of the game, Kingdoms of Amalur: Reckoning almost went by unnoticed at release, mostly due for not being part of a major franchise, Making matters was the original developer going bankrupt and losing all rights to the IP, which seemed to spell the end of the franchise. This, however, did not prevent the game from gathering a cult following in the years after release that kept its memory alive until the true day of reckoning, or rather Re-Reckoning came. And what a glorious day it is: Kingdoms of Amalur: Re-Reckoning is a more than worthy remaster that does justice to the original game and tries to fix some gameplay balancing issues without impacting the original experience a whole lot. 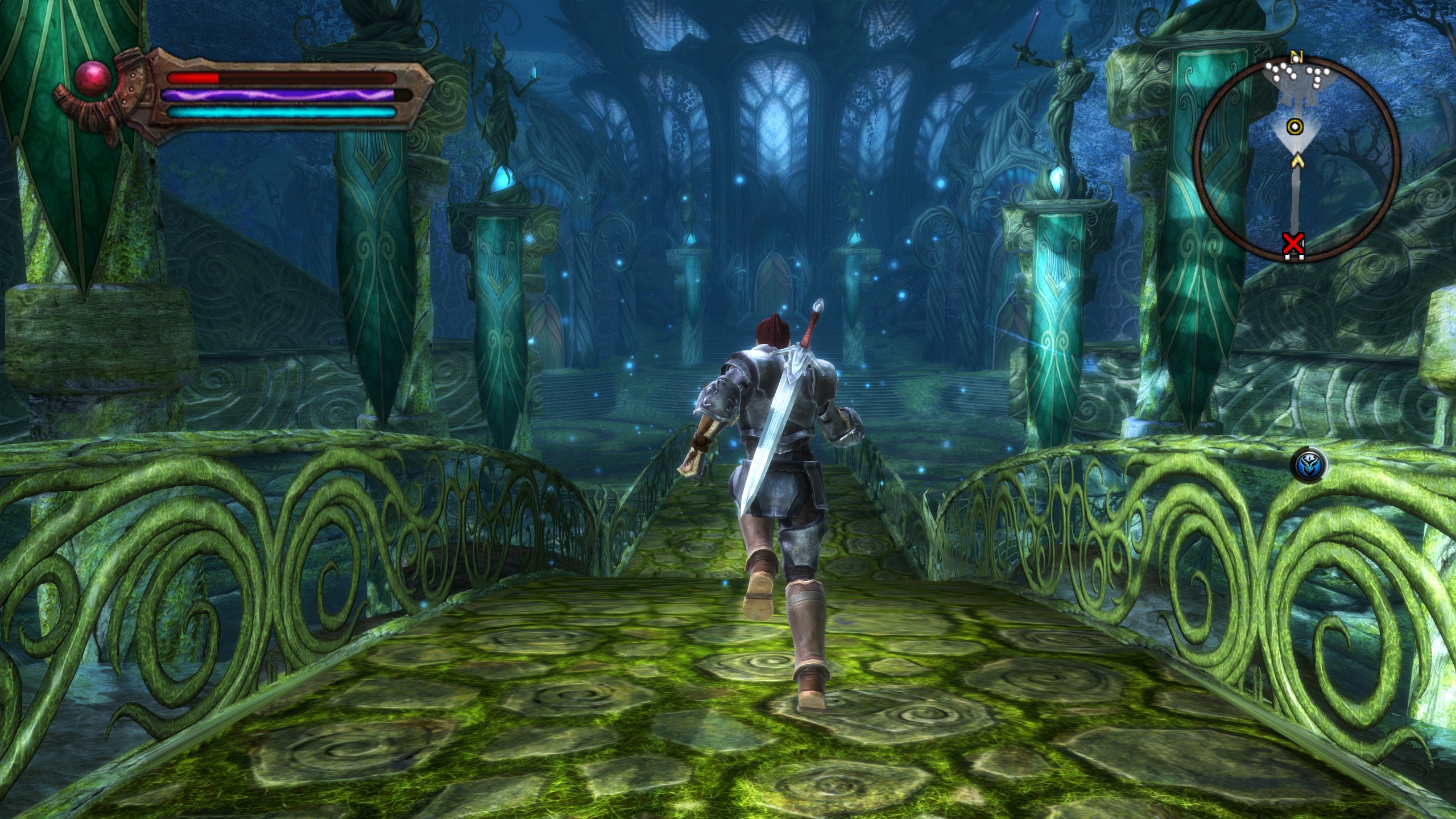 The Kingdoms of Amalur: Re-Reckoning's story is among the game's best features, written by New York Times bestselling author R.A Salvatore. The game starts when the main character, who can be fully customized to the player's likings, wakes up in the Well of Souls, an arcane contraption created by dwarves that can bring back the dead. The resurrected hero, however, is much more than just someone brought back to life.  As the threads of fate of the world of Amalur have been altered to make this happen, the hero is left without a pre-ordained destiny, a condition that lets him or her not just decide their own fate, but also alter those of all the other inhabitants of Amalur, something that will come extremely handy to finally put an end to the long war against the Winter Court that has been ravaging the land for years.

While the story ultimately resolves into the classic good versus evil conflict seen in countless other fantasy games, it manages to be extremely engaging, mostly thanks to the amazing lore. Every race, every named character, every village,and forest has its own story to tell, a story that may not matter much in the grand scheme of things, but that helps a lot to make Amalur feel alive and believable. Some players may be put off by the fact that they will actually have to pursue all this knowledge through dialogues with NPCs, but all the effort is well worth it. 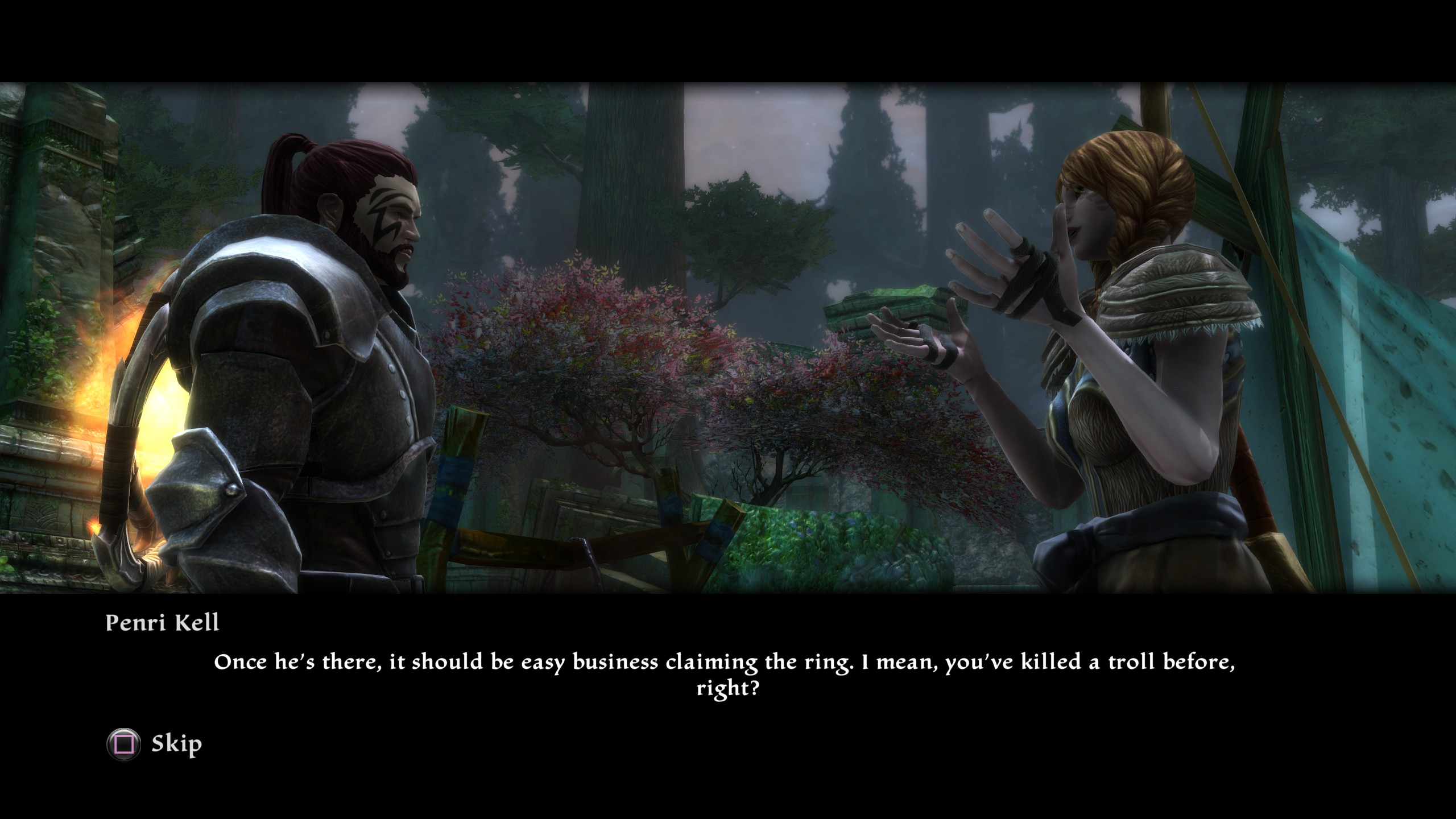 Engaging in conversations with all the available NPCs, while rewarding, becomes harder and harder to do as the game proceeds, as it will take time away from what truly matters most in Kingdoms of Amalur: Re-Reckoning: the gameplay.

On the surface, Kingdoms of Amalur: Re-Reckoning doesn't play too differently from the vast majority of action role-playing game released in the 2010s. After creating your character, you are thrown into a pseudo-open world that can be freely explored, take on both main and side quests, talk with NPCs, loot treasure chests and fight a variety of humans and non-human enemies. The main difference with other action role-playing games is how Kingdoms of Amalur: Re-Reckoning executes these concepts.

Combat is definitely the highlight of the entire experience, as it features a huge amount of options that is only surpassed by modern character action games. Having the ability to equip a main and a secondary weapon, players can seamlessly switch between the two even mid-combo, allowing for some extremely effective combinations that can obliterate enemies with ease. Each weapon type comes with its own unique moveset, which can also be expanded by investing points in the corresponding skill tree: investing points in the Might path will unlock new moves for longswords, greatswords and hammers, investing in Finesse for daggers, bows and Faeblades, in Sorcery for staves, sceptres and chakrams. The fact that you are not tied to a single ability tree provides an excellent level of customization that goes beyond mere stats, giving players additional battle options that make combat feel incredibly dynamic,. The vast array of elemental spells that can be unleashed at any time if the player has enough mana allow for some amazing juggling combos that are quite satisfying to pull off, making combat extremely fun. Defensive techniques such as parrying, also grant more depth to the combat, which feels great at the beginning of the game, and becomes even better later on as more techniques are unlocked. 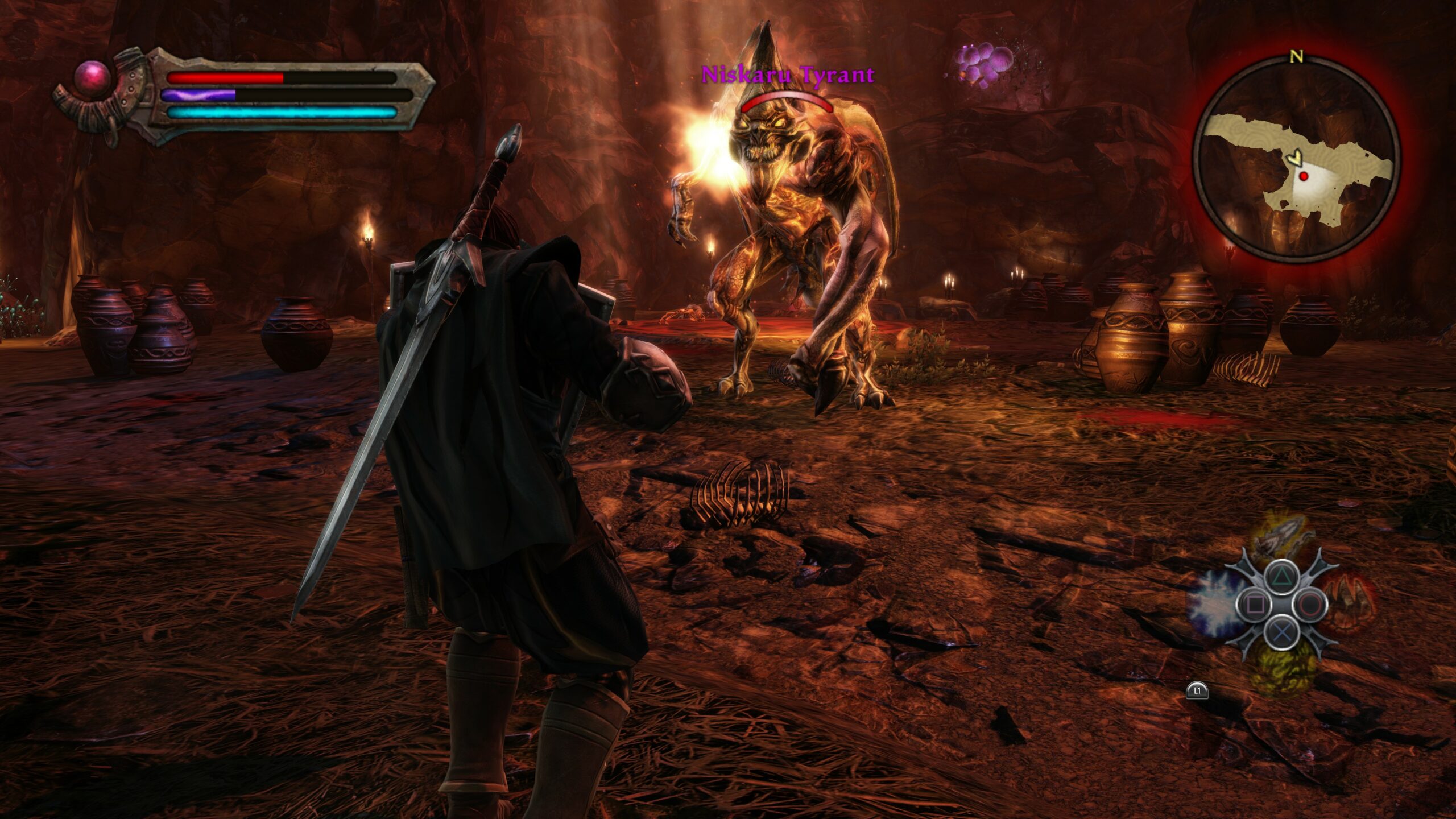 As already mentioned, Kingdoms of Amalur: Re-Reckoning doesn't tie a character to the skill tree players have decided to invest in, allowing them to create highly customized characters. While creating jack-of-all-trades may not be the way to go, the Destiny mechanics make it so that players that decide to do so are not penalized too much. This system, which is tied to the main character's lack of preordained fate, is a very interesting take on the typical class system, as it allows players to choose their destiny after each level up. These destinies, represented by tarot cards, are unlocked after investing set amount of points into the three skill trees, granting the character a set of bonuses that mesh well with the corresponding skill trees. All Sorcery related destinies, for example, usually grant Mana regeneration bonuses, while Might destinies increase strength, defense, and so on.

Character customization plays an important role even outside of combat, as players are able to improve a variety of skills that will make their lives much easier while traveling through the Faelands. These skills range from RPG staples like Alchemy, Blacksmithing, Persuasion, Lockpicking, and Bartering to some more interesting ones like Dispelling, which makes it easier to dispel magic spells protecting certain treasure chests. Here, more than with combat skills, trying to invest points in all skills is definitely not the way to go, as you will end up missing the huge benefits that come from the highest levels. It is not even required to be good at everything, since shops cover pretty much all that can be created with the Alchemy and Blacksmith skills, and there is no need to optimize unless you are playing at the highest difficulty level.

One of the biggest issues of the original Kingdoms of Amalur: Reckoning was its low difficulty level. The normal difficulty was literally a walk in the park, while Hard did provide a slightly higher challenge level, but not quite what was needed to force players to learn all the intricacies of the game's mechanics and enemies' attack patterns to win. Kingdoms of Amalur: Re-Reckoning adds a new difficulty level, Very Hard, which finally provides a good challenge, forcing players to stay always on their toes to avoid getting defeated even by mobs, something that can happen quite often as they like to gang up on the player and attack from every side. Bosses become even more challenging as well, since a single attack may be enough to kill the character. The new difficulty level also makes Fateshift, a super-powered state that makes the Fateless One more powerful and earn additional XP if a finisher move is performed, more important than ever.

The Very Hard difficulty level isn't the only balance tweak that makes Kingdoms of Amalur: Re-Reckoning a much more challenging experience than the original release. The remaster completely does away with level lock, a mechanic that locked an area's level on first entering, and now re-calculates the area's level each time it is entered, making enemies' levels closer to your current one. This mechanic is really a godsend for a game like Kingdoms of Amalur: Re-Reckoning, which can potentially feature a lot of backtracking due to how quests are presented.

While the game is fairly linear in its progression, Kingdoms of Amalur: Re-Reckoning offers tons of sidequests right from the get-go, ranging from simple fetch quests to some more complicated ones that also provide new insight on the world, its factions, and its history. As completing all of the quests available in a certain area before moving on is a gargantuan task that can slow down the main story pacing a lot, most players will end up leaving them for later, leading to the backtracking mentioned above. In the original, this meant exploring dungeons and fighting bosses meant for much lower levels, but in the remaster, they will provide a challenge level that is just right, making them much more relevant than in the original. Skipping side-quests would be a shame, as some of them involve exploring dungeons are quite well-designed, featuring a variety of traps to avoid and contraptions to activate.

While all these balance changes are for the best and make Kingdoms of Amalur: Re-Reckoning much more enjoyable than the original, they don't exactly make the game feel modern. The dated gameplay design becomes apparent right from the start, and the game would have been extremely boring to play after tens of hours if it weren't for the combat system, since it the gameplay loop is basically to move from one quest to another while defeating enemies and looting items. This isn't a huge issue, as you are supposed to know what you are getting into, but it still can put some players off, especially those who have never had the chance to try the original: at its heart, it is still a game from 2013, and it shows. 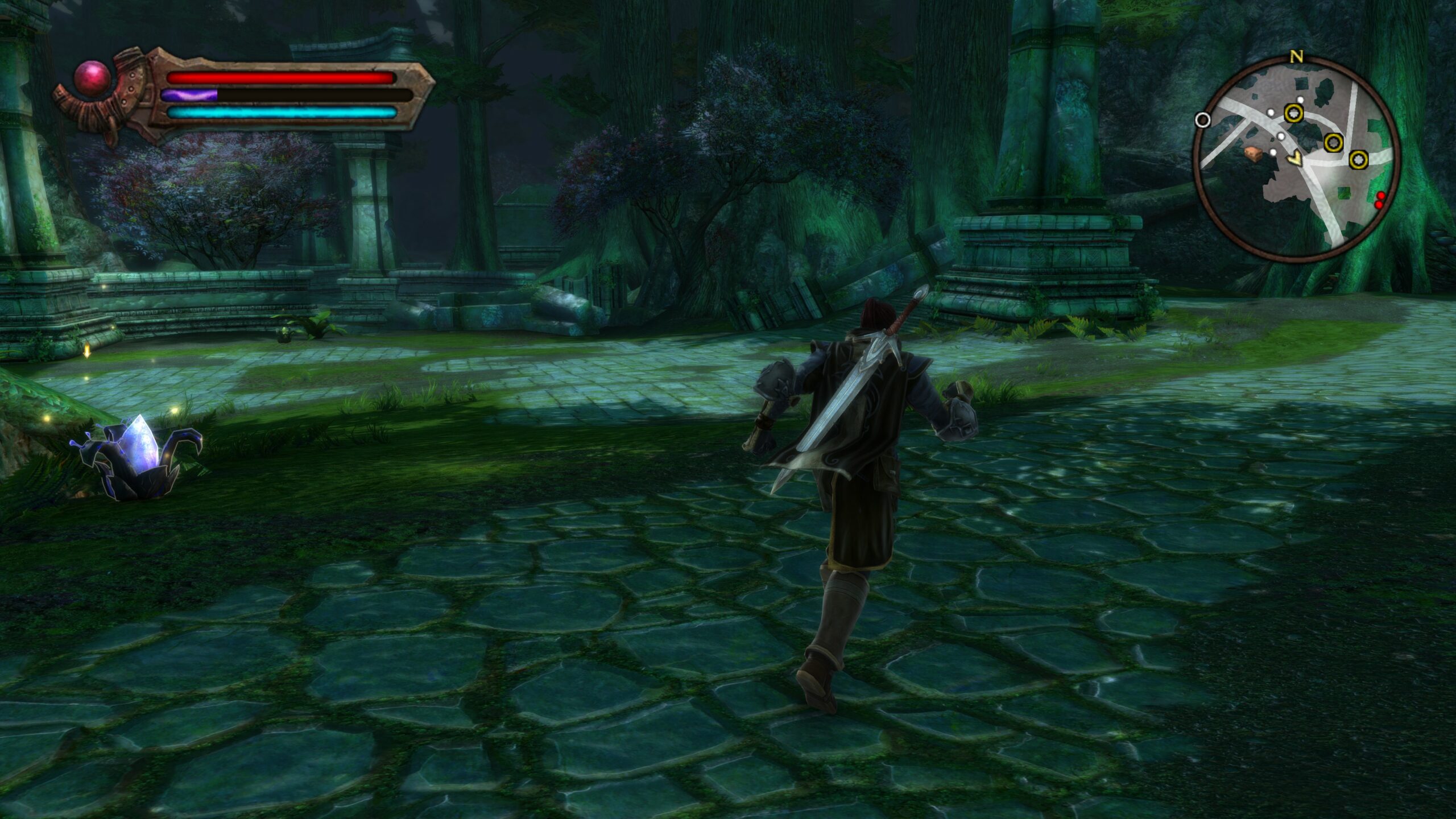 If the Kingdoms of Amalur: Re-Reckoning gameplay design does not feel dated to you, the graphics definitely will, despite a good remastering job that makes the dated character model and the somewhat uninspired location design look acceptable. The PC version of the game comes with up to 4K resolution support as well as options for post-processing, texture quality, vegetation, shadow quality, anisotropy, anti-aliasing, and supersampling which can make the game look extremely crisp. Not being extremely demanding, I had no trouble making it run at 1440p resolution, 60 frames per second on a machine powered by an i7 3770 CPU, 980 Ti GPU, and 16 GB RAM, which is not surprising, considering we are talking about a remaster.

The Kingdoms of Amalur: Re-Reckoning soundtrack and overall sound production are definitely among the game's weakest features. The music isn't exactly bad, but it feels incredibly generic and uninspired and doesn't highlight properly the most important story sequences. Voice acting is also so-so, featuring a mix of solid performances and some bad ones that can sound grating. Again, not surprising for a 2013 game, but still disappointing to see that nothing has been done to improve both music and voice acting for the remaster.

Even with some of its issues, Kingdoms of Amalur: Reckoning is an extremely enjoyable action role-playing game, and Re-Reckoning does a good job of presenting its experience to a newer audience, with a visual uplift and some gameplay tweaks that work great and make side content way more relevant than in the original. The dated gameplay design and the huge amount of lore that requires some effort to understand may put some players off, but those who are willing to look past these issues will find a game that is more than worthy of their time.