Kingdoms of Amalur: Reckoning has been, for a very long time, one of the best role-playing games that almost no one ever played, but last year's release of Kingdoms of Amalur: Re-Reckoning finally allowed more players to lose themselves in the rich world created by R.A. Salvatore and Todd McFarlane and enjoy its great mechanics and engaging combat.

Bringing the Fateless One back from the dead, as big as an achievement it was, however, clearly wasn't enough from the onset, as an all-new DLC expansion called Fatesworn was announced even before the game was released. Being the first piece of new Kingdoms of Amalur content since the launch of the Teeth of Naros DLC back in the day, fans are eager to know if the long wait was worth it. Indeed it was, in my opinion, as Fatesworn is a meaty expansion that features not only everything that makes the base game great but also some brand new well-crafted mechanics that do enhance the experience.

Alone in the Dark Impressions – Back to Basics

The story of Fatesworn takes place after the events of the main campaign. After years of conflict, the Tuatha warlord Gadlow has been defeated by the Fateless One, and the Crystal War has finally reached its conclusion. The people of the Faelands thought that the time of peace and rebuilding had finally arrived, but it seems like the events that turned our hero the Fateless One started unraveling the Tapestry of Fate, leading to a new crisis that could spell the end of the world.

After receiving a mysterious letter, and fighting a group of Niskaru, the Fateless One is asked by the Order of Fateweavers to head over to the western region of Mithros and join Agarth, who journeyed to the mountainous region to investigate increased Niskaru activity. Eventually, it is discovered that this increased activity is due to Telogrus' cult, worshippers of the God of Chaos who aims to destroy destiny itself to release people from the bonds of Fate, and only the Fateless One has what it takes to stop what's happening and prevent the Chaos God from having it his way.

The Fatesworn story doesn't move much beyond the boundaries set in the main campaign, but it is enjoyable nonetheless, as it ties surprisingly well with the main campaign, is written nicely, and features the same amazing worldbuilding seen in the main story.  It doesn't even overstay its welcome, clocking at around 6 hours or so. Those invested in the world will also be able to lengthen their stay in Mithros by discovering new Lorestones and completing sidequests that provide more information on the new mountainous region, its people, story, and traditions. The main story, new characters, and sidequests are all quite coherent with the setting and the established lore as well, so much that Fatesworn doesn't feel like an addition to a story that was concluded almost 10 years ago, but an integral part of the whole that has always been there.

Gameplay in Fatesworn, like the story, feels quite familiar on the surface, as the new quests still involve going from one place to another, talking with NPCs, interacting with certain objects, and exploring some new intricately designed dungeons. Some of the new additions included in the expansion, however, do make the experience feel somewhat different.

The new gameplay mechanics features in Fatesworn are all based upon the Chaos Realm and its magic and are introduced gradually as the Fateless One explores Mithros. Among them are Chaos Rifts and Portals. The first are rifts from where Niskaru and other agents of Chaos spawn, and they can only be closed once they have been stabilized by defeating all enemies that spawned from them. Chaos Portals, on the other hand, lead to the Chaos Realm Dungeons, brand new procedurally generated dungeons filled with powerful enemies that can only be damaged by destroying their Chaos armor with the new Chaos weapons. To learn precisely where Chaos Rifts and Portals are, players will need to develop their Chaos Insight non-combat skills.

The new Chaos-powered enemies aren't the only new enemies players will have to fight in Mithros, as new variants of older enemies are also included, and they have some new tricks under their sleeves. With the increased level cap, now at 50, and new Twists of Fate, like Chaos Trall, the game provides all the tools needed to take down the new enemies, although they do generally feel like much of a challenge at Normal difficulty, with only a few exceptions.

The Fatesworn expansion also has a little something for completionists and those who wish to continue playing further once the new story has been completed and all the new sidequests cleared. Not counting Chaos Dungeons that become available all over Amalur, offering players a chance to actually reach the new level cap, the expansion introduces a new trader that sells equipment lottery boxes that make it much easier to complete rare item sets. It is a small addition that will only be of interest to a few players, but it's still a very welcome one that finally makes it possible to reach true 100% completion without having to invest tens or even hundreds of hours.

While all of these additions are great, and they will make fans of the base game happy, they don't do much to address some of the issues of Kingdoms of Amalur: Re-Reckoning, namely the dated gameplay loop that tends to become a little repetitive, or the low challenge level, which does damage the amazing combat a bit. Also, players shouldn't expect too much from Chaos Dungeon, which is not surprising given they are procedurally generated.

Kingdoms of Amalur: Re-Reckoning - Fatesworn is a great expansion and a more than worthy conclusion to the tale that began in 2012. The new content, however, doesn't really push the boundaries the original game set back in the day, so it will hardly bring new fans to the fold. Fatesworn is an expansion that rewards fans for their patience, and this is, at the end of the day, all that truly matters. 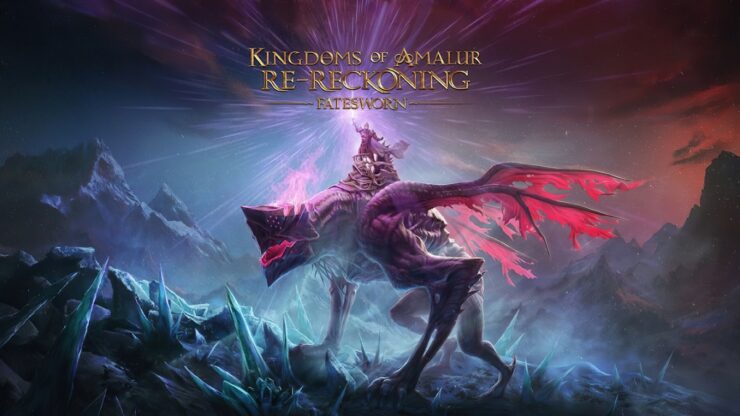 With an engaging story, amazing lore and worldbuilding that fit nicely with what has been established in the main campaign, and a huge number of new well-crafted additions, ranging from a new location to new mechanics, new enemy types, and gear, Kingdoms of Amalur: Re-Reckoning - Fatesworn is a great way to end the story that started back in 2012 and a very good reason to journey back to Amalur one more time. The new content doesn't stray too far from what we have already seen, however, so only those who did fall to the dated charms of the base game will find it truly worthwhile.

Jagged Alliance 3 Impressions – Returning to the Past