Intel might be facing a ton of competition on its CPU side from AMD, but its NUC division is on an absolute winning streak. What started as a premium product a couple of years ago now has a very real value proposition for the average masses. The brand new Phantom Canyon NUC with Tiger Lake (4-core) and an NVIDIA RTX 2060 is the first device in this form factor we have tested that would actually be able to handle a non-trivial amount of gaming and computational workload. Best of all, it costs only $1198; an extremely affordable price in today's era when an RTX 2060 alone costs $999.

The ever-increasing GPU prices (thanks to cryptocurrency mining) means that it's getting increasingly hard to get your hands on affordable gaming performance but unexpectedly, Intel has the perfect solution ready with its small form factor PC: the Intel Phantoms Canyon NUC. The device is marketed as a very powerful PC with enough power to game at 1080p Ultra or 1440p medium to high settings. Today, we will be testing it and also comparing it to its spiritual predecessor: the Hades Canyon NUC (editor's note: Ghost Canyon is a separate branch of Intel's NUC lineup and has not had a successor yet).

On first glance, the Intel Phantom Canyon NUC looks exactly like Hades Canyon. It is an incredibly compact form factor that packs an absolute ton of punch per square millimeter. Intel clearly spent a ton of time thinking about cooling this device because they have included a stand this time that they recommend using for heavier workloads. The underside of the NUC reveals two powerful fans and a large (shared) heatsink that spans across the entire edge of the device.

When you compare the device directly with its spiritual predecessor you start to notice the differences. For one, Phantom Canyon is just slightly bigger. It also gets rid of the HDMI port on the front but remains mostly similar in terms of IO (you still have the Type C in the front). 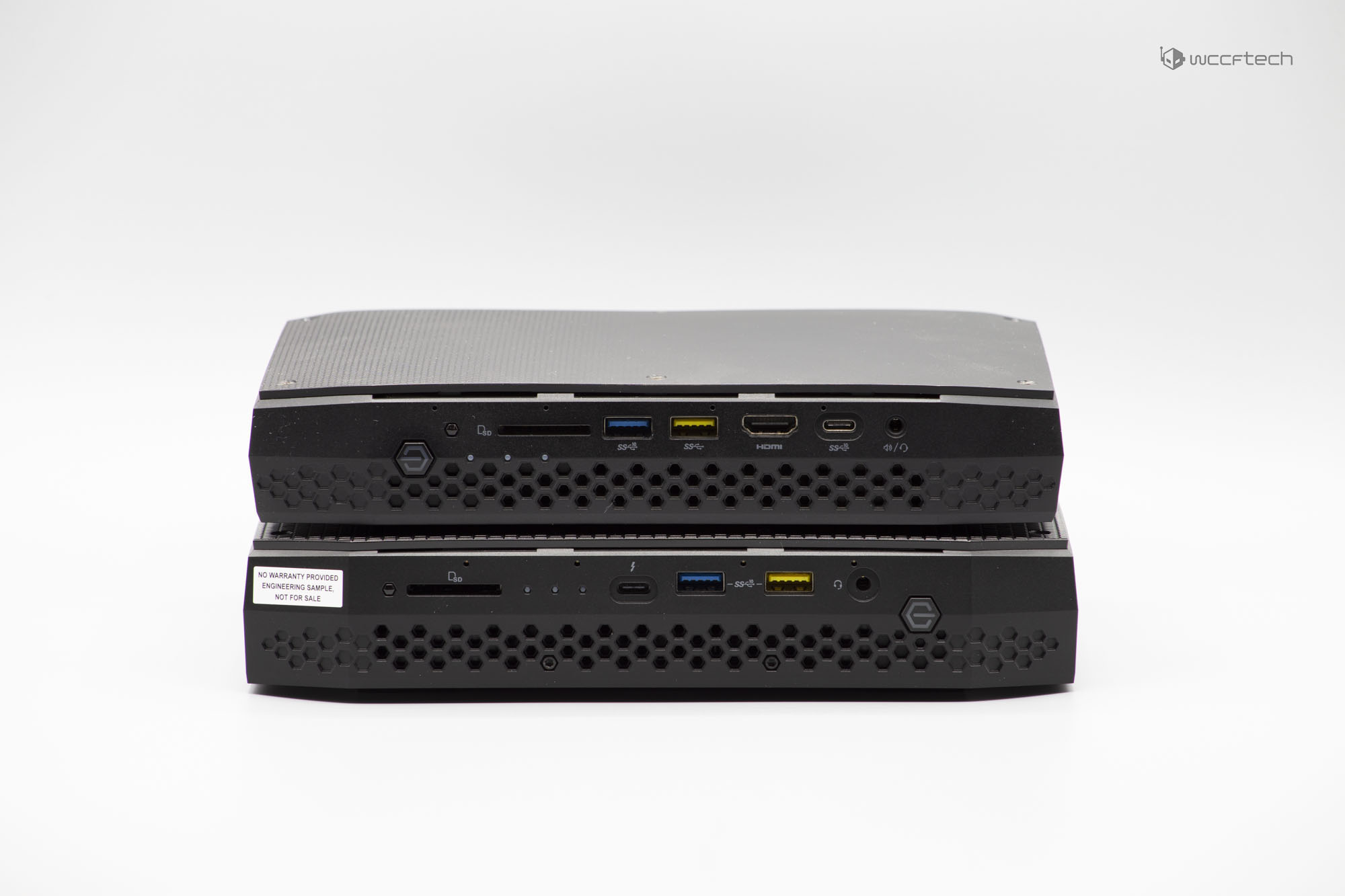 The back IO port shows more changes. Intel has clearly crammed a ton of silicon in a very small space and that appears to have involved sacrificing some redundant connections. Instead of two Type C thunderbolt connections, we just have one at the back. The dual LAN ports have also been trimmed to one. The same goes for the mini display port connections (of which only one remains). The USB 3.0 count on the other hand, has survived the purge. 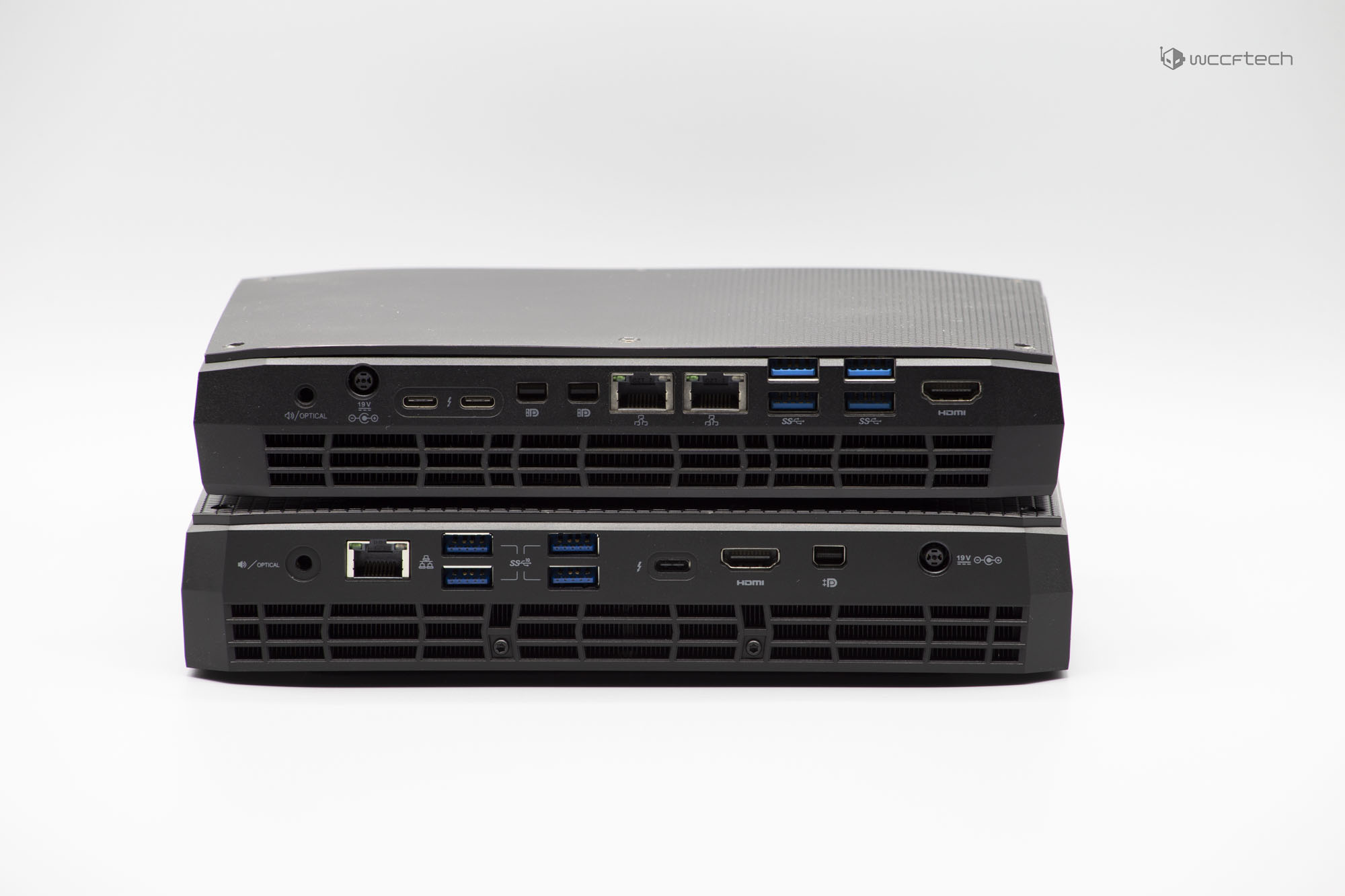 The Intel NUC11PHKi7C we received is a barebones kit which ships with everything except RAM and SSD. To add RAM and an NVME SSD, you have to go through multiple screws and carefully unhook the LED logo. 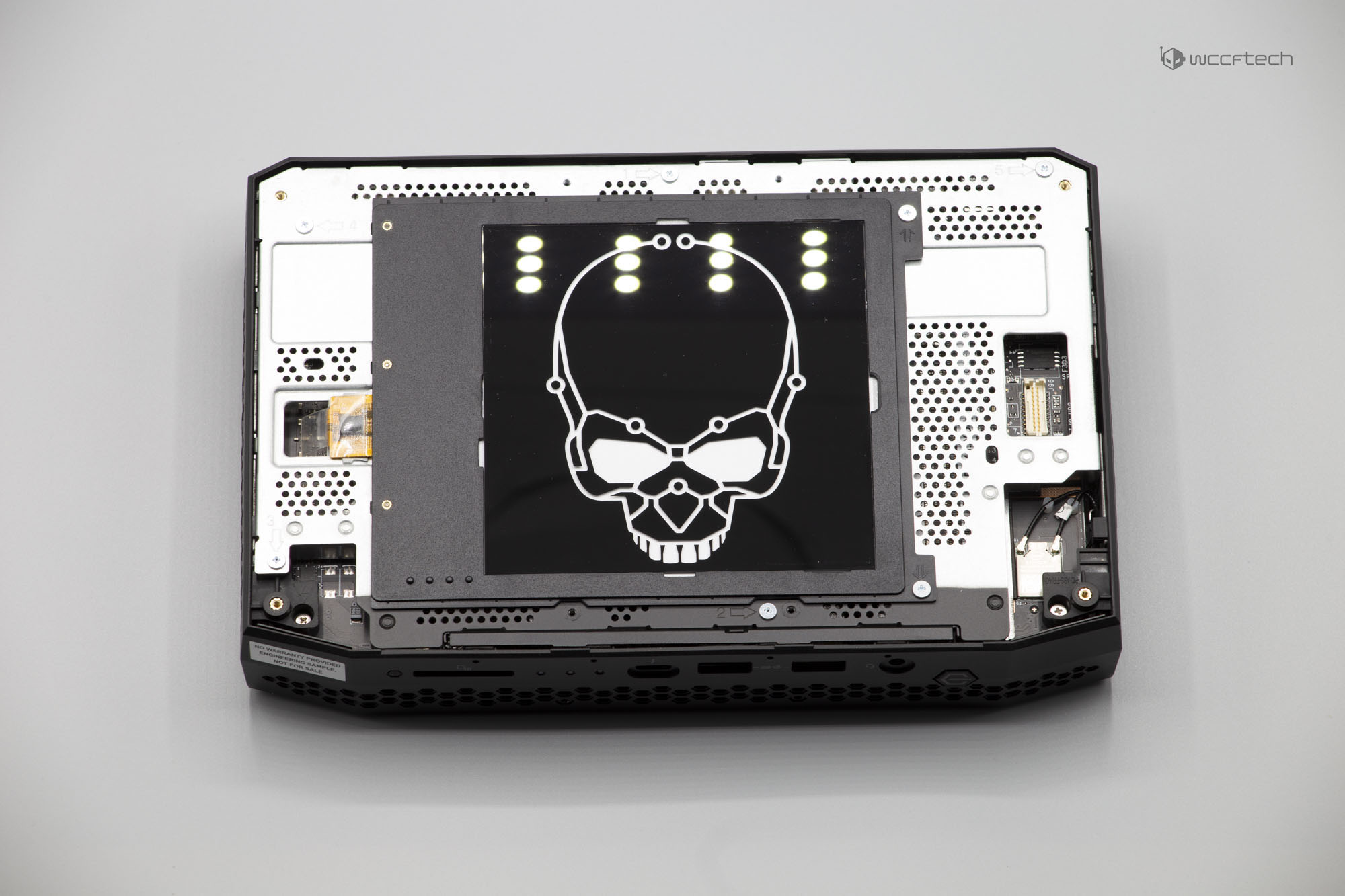 The NUC rocks an Intel Tiger lake Core i7 1165G7 (which also has an integrated Xe GPU by the way, although we are not sure why you would ever want to use that) and an embedded NVIDIA RTX 2060 GPU. Power is supplied by a beefy 250W power brick (laptop class). 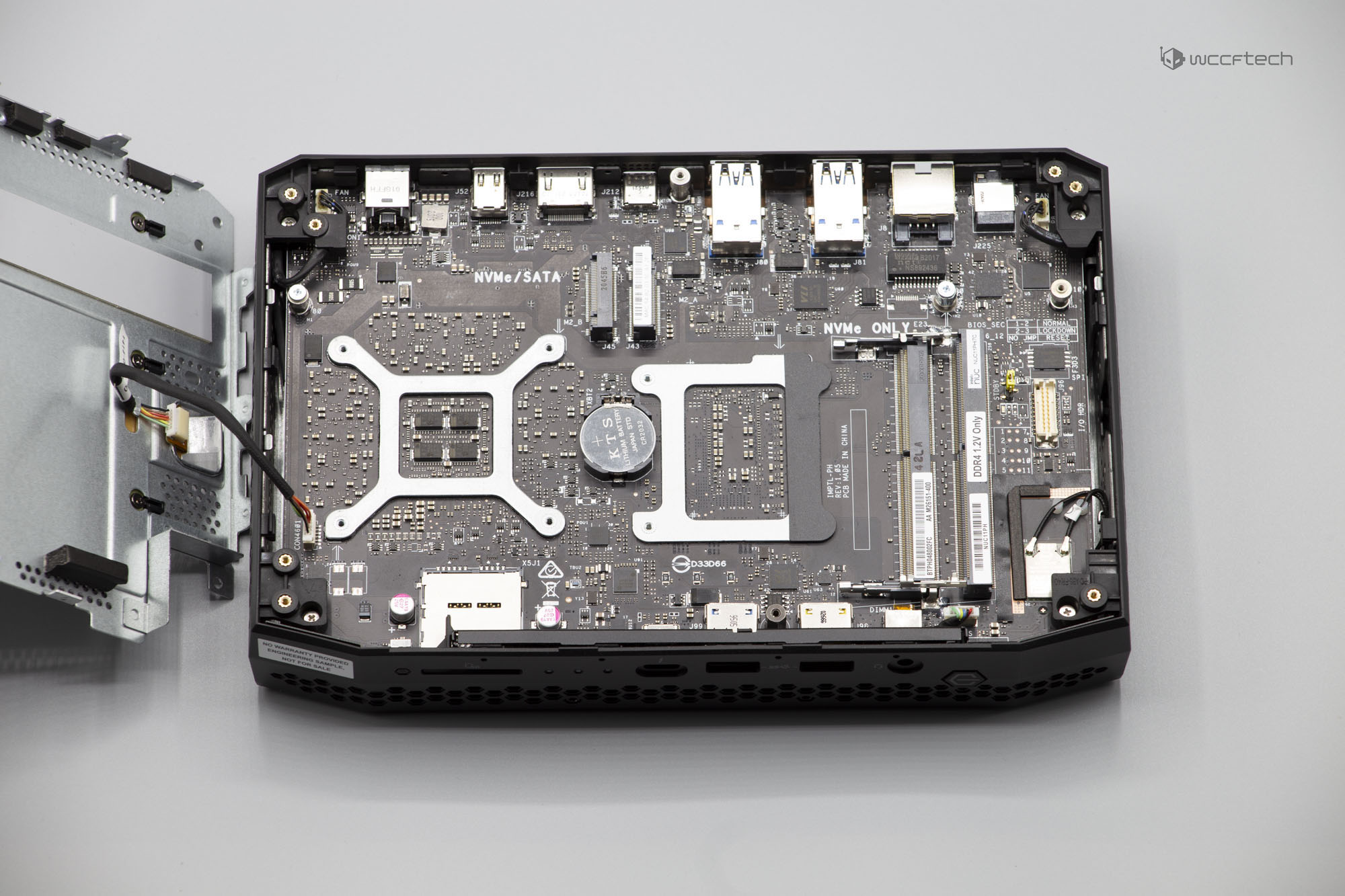 The underside of the motherboard is then visible with two DIMM slots and two NVME slots provided for a decent amount of expansion capability. Since we are trying to minimize the build cost on this one, we added a simple 1 TB Kingston NVME SSD and  16GB DDR4 ADATA ram.

Alright, let's get to the exciting part now. For the first stint of the benchmarks, we are going to be comparing Phantom Canyon directly with its predecessor. Hades Canyon was powered by an Intel 8809G processor and the Vega GH embedded GPU. It was also a fully tricked-out PC (not a barebones kit) so is running Intel recommended RAM and Optane SSD.

First, we have the Cinebench R20 benchmark. Phantom Canyon scores roughly 27% higher on the single thread score and roughly 29% higher on the multi-thread benchmark. The 8809G draws 99 watts from the wall at load while the 1065G7 drew a maximum of 85w from the wall at load. This is a power efficiency improvement of roughly 50% - which is to be expected considering the shift from 14nm process to 10nm SuperFin.

We also ran gaming synthetic benchmarks to get an idea of what performance to expect in games. Here, the Phantom Canyon absolutely shreds its older brother. Graphics score is up 240%, Physics score is up 160% and the overall score is up 222%. Intel has clearly delivered multiple generations of performance increase thanks to the process shrink (14nm>10nmSF) and finding a way to embed an RTX 2060 in the same space.

Thanks to the RTX 2060, the Phantom Canyon supports all the latest bells and whistles features including DXR. Although performance is mostly unusable at this tier of Turing.

The RTX 2060 has multiple variants including desktop, desktop-mobility, and purely mobility ones. To get a better idea of where the variant in the NUC lies, we ran benchmarks to compare it against known reference points. The RTX 2060 in the NUC is a mobility GPU that performs somewhere in the middle between a desktop RTX 2060 and a laptop RTX 2060. It clearly has more power (and cooling) to work with than most laptop RTX 2060s which allow it to run extensive workloads without throttling down.

Cooling was actually something we were incredibly impressed by as previous NUC models have suffered from an overheating and throttling problem - including the recent Ghost Canyon.

The Intel Phantom Canyon NUC was able to deliver stunning 1080p performance (most titles averaged a 99 percentile above 60 fps) and gobbled up pretty much any title we thew at it on the highest quality settings. This allows us to recommend this NUC for up to 1440p gaming (it was easily able to run that resolution by dropping the settings down to medium to medium-high from ultra).

The Intel Phantom Canyon is a big step in the right direction. Unlike previous NUCs (with the exception of Ghost Canyon) this is something that could actually be a daily driver for a power user. The powerful IPC of the TGL 10nm processor combined with an RTX 2060 and impressive cooling works wonders. Thanks to the massively inflated GPU pricing in the world, the "premium" Intel charges for its NUC is actually a discount now. For $1198 you can get almost desktop RTX 2060 performance (with a whole PC).

For context, the desktop RTX 2060 is retailing on Amazon at the time of writing for $999. Since the $1198 tag represents a bare-bones kit you will have to spend close to $144 for 16GB RAM and a 1TB NVME bringing the total damage to around $1342. The Phantom Canyon NUC represents excellent value and we can wholeheartedly recommend it for space-conscious users (or even just those willing to downsize to an aesthetically pleasing PC). 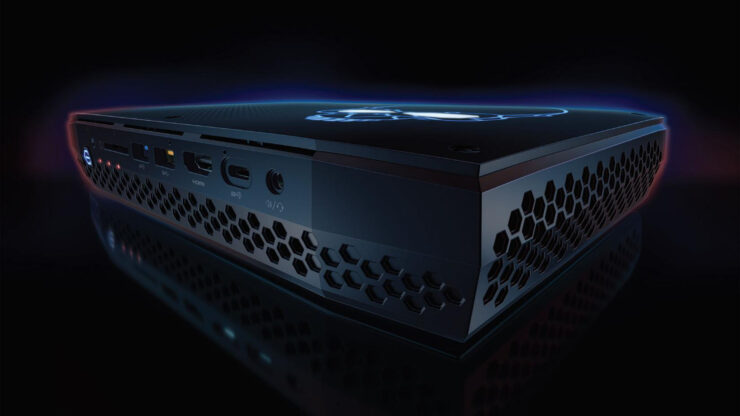 An unexpected win from Intel in the NUC department. For the first time, due to prevailing market conditions, there is a strong incentive for the average consumer to buy an Intel NUC for sub-4k gaming and daily use.