So, I'm a fan of asymmetrical multiplayer games. Well, some of them. The ones that are good. Illfonic has already developed one asymmetrical multiplayer game, Friday the 13th, that eventually got into a state that could best be described as "good". That was until legal battles put an end to any new content, Illfonic then left the project. Risking a licensed brand yet again, Illfonic has developed and now released Predator: Hunting Grounds.

Did you all know that in the original film the voice of the predator was based on a horseshoe crab? If not, now you do. Keep that in mind.

The predator is a ubiquitous bugger, that much is certain. It has shown up in the Bolivian jungle (Wildlands), been in fights with the crew from Mortal Kombat X and, of course, faced off against the Alien quite a few times. It's been fifteen long years since Commander Crab has had its own game, that being Predator: Concrete Jungle. I can say, at least, that Illfonic has surpassed that. Honestly, Illfonic has made a game that feels like being a part of the first film, for better and worse.

Let's talk about playing as the titular character because let's be honest, nobody cares about being a generic soldier. If you wanted to be a soldier, you'd want to be Arnie or Gary Busey, maybe Danny Glover. The fact that the queue to get in a match as Corporal Crustacean is seven times longer, on average, also highlights this fact. Well, if you can get in a match. A few times I've been able to get to a lobby, only to then be "waiting for players" a good five to ten minutes more.

This isn't all the time though so I can't say for sure if it's a bad matchmaking system or if it's simply that there aren't many people playing Predator: Hunting Grounds. It does support cross-platform between the PC and PlayStation 4 though, so at least that expands the player base. I do find it strange that I can't see how many people are online or even how many games I've actually played for that matter. There are no stats at all. 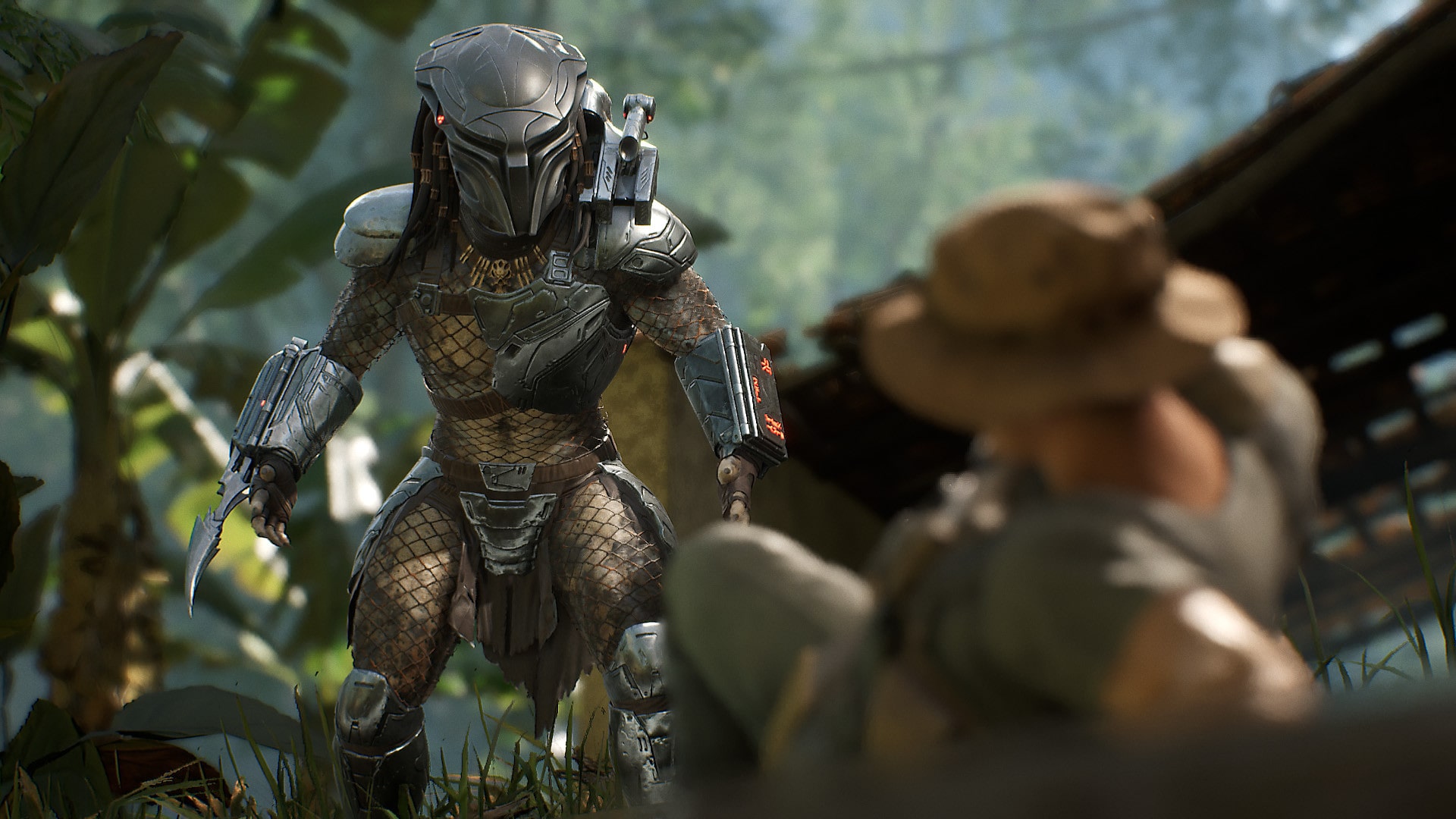 Sorry, I was going to talk about playing as the predator. Right, the objective here is that you kill the opposite team. That's it. It needs no back story and no objectives beyond 'kill'. You can use the environment to aid you in this quest, to an extent. Do you run up behind a wild boar and scare it, causing it to run towards the enemies and make them think of a bacon sandwich? Maybe you'll use height to your advantage by climbing and jumping between trees like Tarzan. All two of these options are at your disposal in Predator: Hunting Grounds.

That's a little simple. Brigadier Brachyura also has weaponry and abilities you'll recognise from the films. Infrared visibility and stealth can both be used, tied to an energy meter, as is the plasma caster weapon. There are other weapons unlocked as you level up, from swords to bows and even a pistol version of the plasma caster that runs on ammo. These are also joined with specific abilities, such as reducing your blood trail.

These weapons and abilities are unlocked by levelling up and equipping them in character customisation. Both the predator and humans have multiple classes, each with differing base stats for you to work with. You're given multiple characters slots for both sides too. The problem is that unlocking is glacially slow, particularly when you're waiting a lot just to get into a game.

Still, when you're in a game it's great fun being in that role, using your abilities and weaponry to ambush the humans as they try to complete their objective. Even better if you can use their distractions to peel them off, one at a time, violently ripping out their spines and skulls. 4v1 asymmetrical multiplayer can be great, particularly the fun and challenge of being the one. You're not invulnerable and if you're not careful, the humans will turn you into swiss cheese. Still, you have the ultimate grief ability of a massive self-destruct bomb if the humans do get you down. 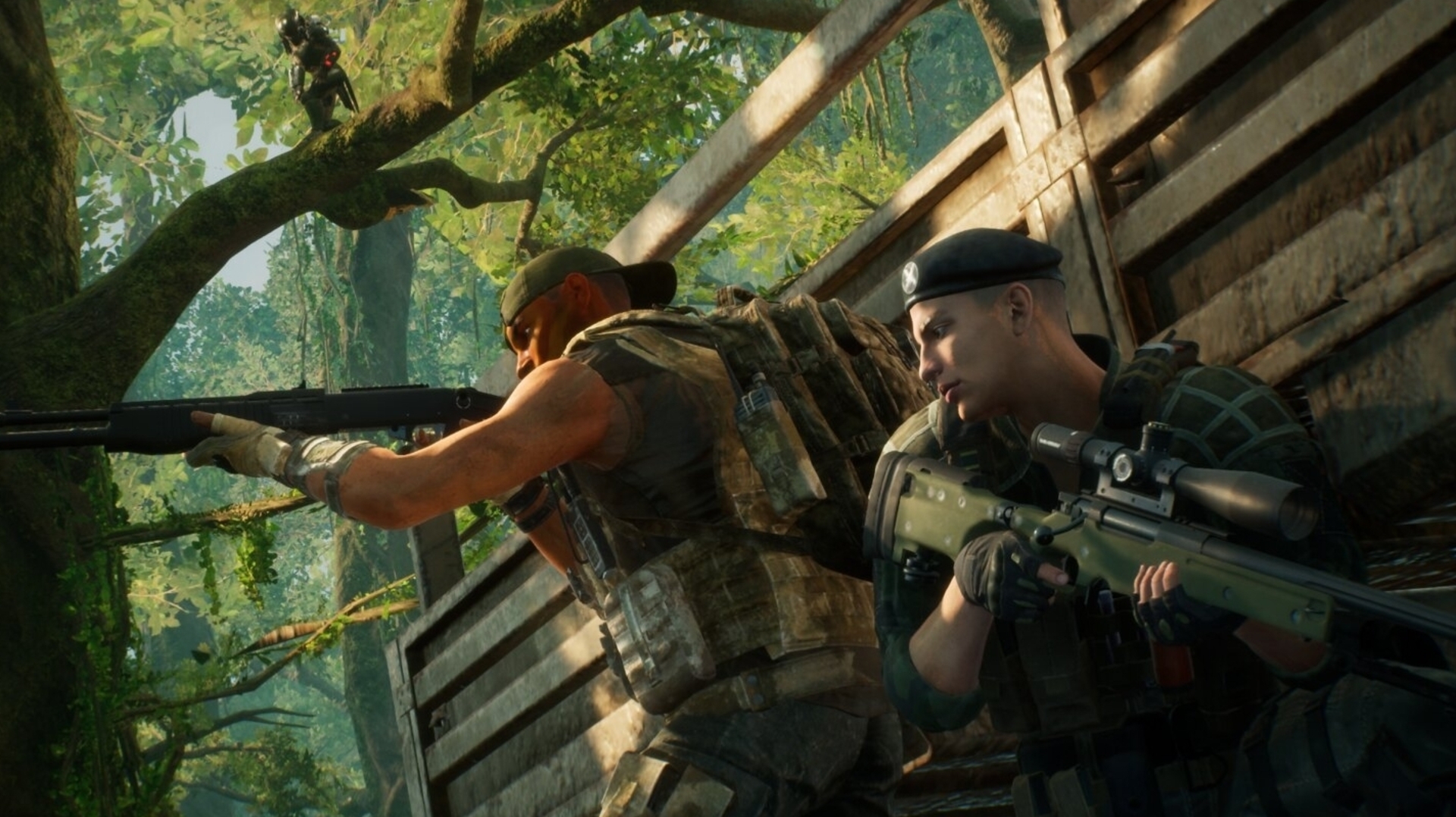 As for humans. Well honestly, I'm rooting for the predator in this fight, if only because the average intelligence of people playing as humans in this game seems to be at amoeba level. When Sebastian is shooting at you, red lasers appear. This gives you a bit of warning as to its location and also where you don't want to be. Sure, we all get caught for one reason or another, but I've seen people literally standing there like gormless morons, facing the damn lasers and doing nothing. I genuinely think it would be harder to miss them than to see them.

I think communication comes into this. I've been playing this on the PC rather than the PS4 and strangely, Illfonic never thought to put in text chat. Sure, you can use your microphone but Predator: Hunting Grounds conveniently omits which key to press, since push-to-talk is standard. It's T, by the way. In the options and you're given the choice of standard controls, alternate controls and custom controls. Only the game doesn't bloody tell you which key does what for standard and alternate, you have to go into custom and edit just to see what standard is.

Before I get back to the gameplay, let's talk about the visuals and audio. The game doesn't exactly look great even on top settings. This isn't to say it's bad, it isn't, the jungle certainly has some depth to it and it feels oppressive. You can also customise the appearance of your character by changing clothing and weapon skins gained from in-game loot boxes or purchased with in-game currency. It still doesn't make it look anything other than fine.

The Audio, on the other hand, is very good. The sounds of the rainforest, the sound of bushes rustling and particularly the sounds of the heavy crab-faced goon that's trying to murder you all truly add to the atmosphere. It's especially daunting when you hear the roar of Krabby over the ongoing firefight, you know it's healing up and getting angry. 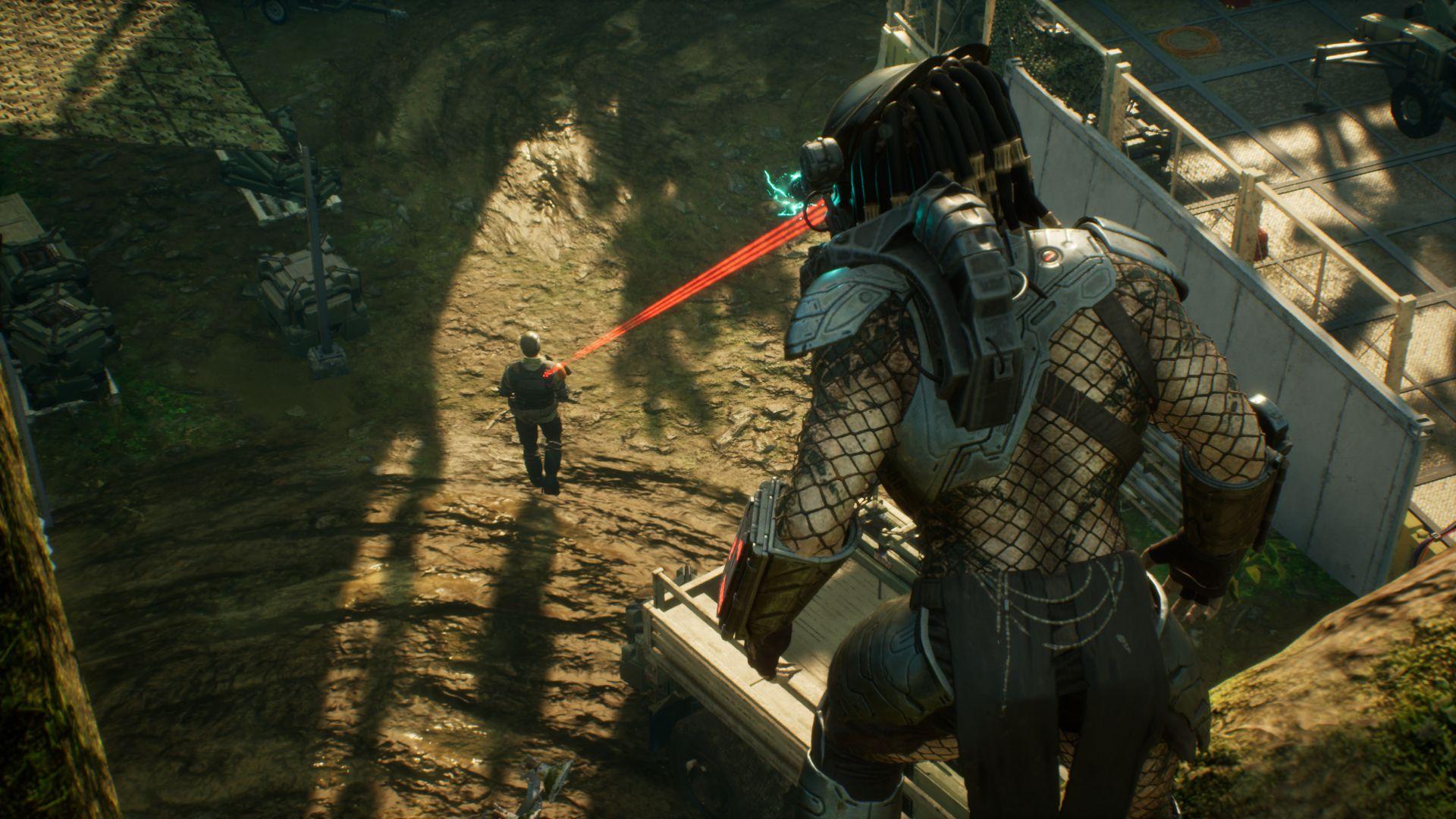 What was I talking about again? Humans, that's it. These detract from the atmosphere. The idea of a 4v1 game is for the four to work together and beat the odds. While Predator: Hunting Grounds can't be blamed for putting you with morons, it can be blamed for being damn boring and not keeping their attention. That's until Onibaba starts coming in to claim your skull as its next ashtray. The reason for this is a combination of the AI humans as well as the objectives you face them over.

You've been sent to the jungle for a reason so the game at least has to give you something to do. The problem is that all of the objectives revolve around finding something, killing something or destroying something. You also have quite a bit of standing still while something uploads or gets wiped from your tech support, facing off against waves of the AI enemies. Much like a wave, they also come at you and do not veer at all, just running straight into bullets, taking no cover.

Not that they need to, because they must have the same armour as Juggernaut. it's absurd just how much metal can be sunk into them because they die. We're talking a few headshots here. It's not like it has any value either, it's plainly just made to delay you, just so Tamatoa can formulate a plan and start clawing at your nipples. It also doesn't help that every environment looks the same. Yes, jungles do look the same, but the enemy camps don't have to. It's just so annoying that the moronic AI and samey quests actively suck out any tension you may feel about being hunted.

Speaking of being hunted. When it comes to combatting Zoidberg (I've run out of crabs) you can also do an Arnie by covering yourself with mud to avoid IR detection, or at least lose the tag it had on you before your mudbath. I mentioned the self-destruct as well, as a human if you can enter the code in time then a further objective of protecting the body from the AI starts, netting you a huge experience boost if you succeed. Really though, it's just about paying attention and outsmarting whoever is the one from 4v1.

So Predator: Hunting Grounds can be fun. The problem is that fun is such a small fraction of the time you'll spend with the game and the repetition kicks in quickly. Simply put, it's boring. Boring enough that I had to challenge myself into not using 'the predator' to describe the titular character, aside from once per section. When writing the review of a game is more entertaining than the game itself, we have a problem.

My concern with Predator: Hunting Grounds is a simple one. If Illfonic doesn't fix the issues with getting in a game and a few bugs like AI enemies glitching into the floor, as well as develop some content to actually liven it up, it'll become another Evolve. If the issues are fixed and a bit of content is made, I could genuinely see this having a decent following. I know I'd come back to it.