Everything about this game is cool and calculated. Whereas most battle royale games feel like a rushed, uncertain combination of mechanics, Hyper Scape knows exactly what is doing. This isn't a confused combination of mechanics born of an attempt to jump on the latest hype, this game has had the time to look at the market and make something new. For that I have to applaud Ubisoft, they've made one of the most polished battle royale games on the market. But it's also one of the blandest.

Hyper Scape is a 99-man battle royale where you aim to come out on top. You'll be running around stages looking for loot, gathering up the best arsenal possible, and gunning down other contenders either solo or in squads of three. This should be a pretty familiar descriptor to anyone who has played a battle royale game. How Hyper Scape differs is how the looting system works, the powerful abilities called "Hacks," and the verticality of the battles you engage in. While PUBG and Apex Legends will primarily see your battles contained to the ground, in Hyper Scape hacks allow you to scale buildings in seconds and ambush opponents quickly.

There are several hacks in the game, some of them only really useful for offense or defense, such as Invulnerability, Shockwave, Mine, and Magnet. In order, those abilities can make you invulnerable, send out a shockwave to push enemies, plant a proximity mine, and place a magnet that keeps enemies in place while you escape or shoot - just in case the names didn't give it away. These abilities aren't locked to hero characters to unlock, but they're just laying around the stages, making the game a truly even playing ground for all players. Other abilities, such as Ball, Teleport, and Slam, can be used to move quickly, escape, scale buildings, and keep mobile in tense situations. The variety of abilities means you must be on your toes in every encounter, in case the enemies are packing something deadly.

The weapons you collect are a bit more typical. A single-fire assault rifle, a sniper rifle, a powerful Gatling gun, several unique and explosive energy weapons… There aren't any weapon archetypes that aren't included, and the actual shooting feels fine. The weapons feel fine to shoot. That's about all there is to say - there's a decent amount of recoil and audio feedback when you shoot the weapons, and while they're not the weightiest battle royale guns, they are absolutely acceptable. The biggest thing to say about the weapons is perhaps that the Hexfire is overpowered right now and is outraging the community. 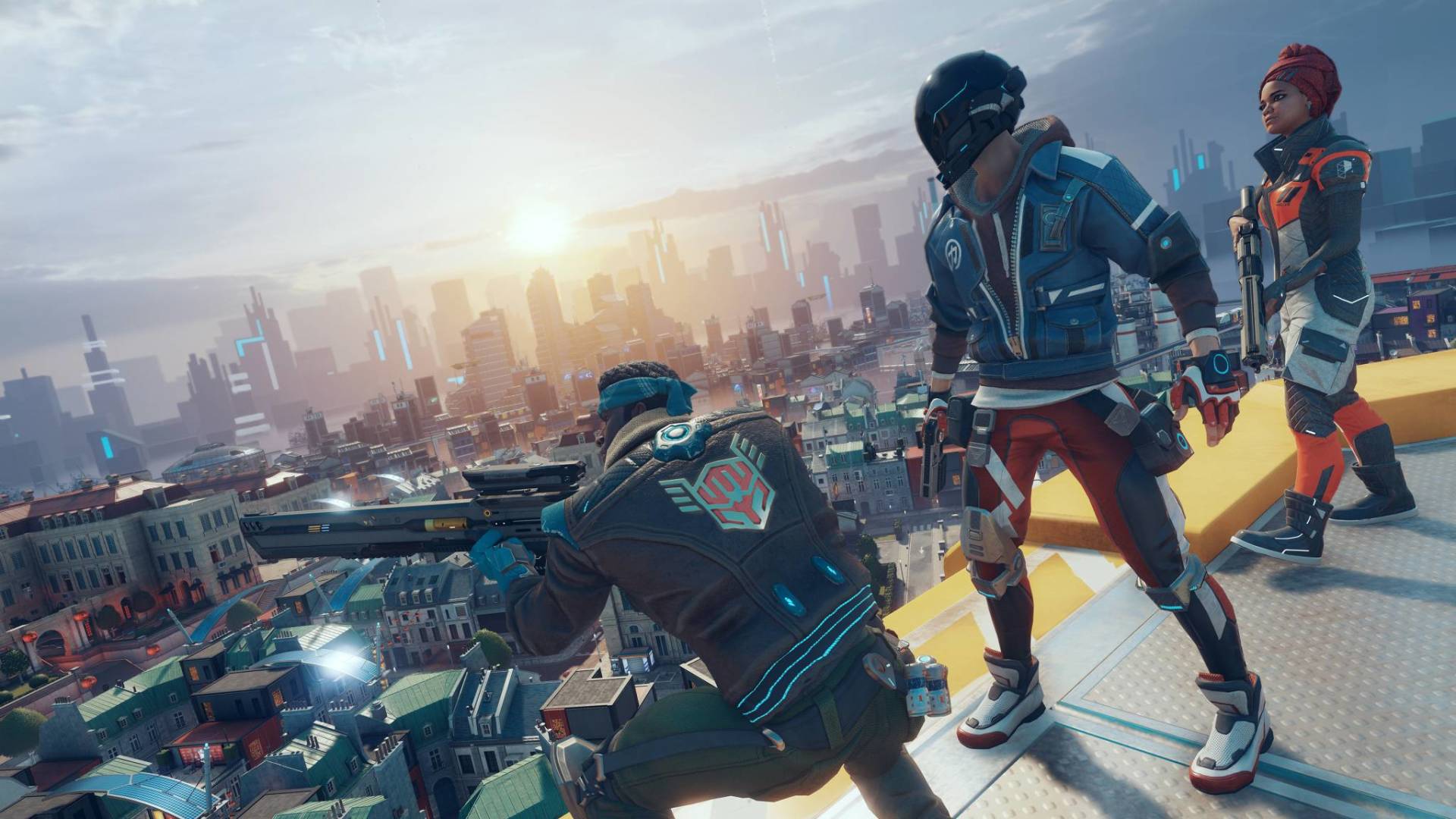 But one thing I genuinely love about Hyper Scape is the looting system. In Hyper Scape you won't be upgrading your weapon by finding attachments and obtuse items, instead, you'll simply be finding more the same weapon. Find two Hexfires, combine them, and you'll have more ammo and firepower. This is a great system that keeps you looting throughout the duration of the battle royale, instead of having you go through a looting phase and then a fight phase. The same goes for your hacks, making your abilities more powerful and effective, with shorter cooldowns, as you find more of the same kind of ability. This is a refreshing change to the battle royale formula.

And as a final piece of praise, the movement in Hyper Scape is very satisfying, if not quite perfect. The level of verticality it gives you is wonderful, and there's an incredibly lovely boost slide that can propel you along the ground. You can actually go straight into a boost slide as you land from a jump by tapping the crouch button, and you can string boost slides and jumps together infinitely to move at speed. This feels good, making it enjoyable to navigate the large map in combination with the hacks, though once you jump out of a boost slide you immediately slow down, meaning this game never quite hits the highs of Titanfall 2. The finale of the game, the crown rush where a single player with the crown is hunted until there is only a single team left, even feels like a desperate attempt to separate Hyper Scape from the crowd, and it fails.

Now that the praise is out of the way, it's time to get serious. Hyper Scape is an incredibly bland game. The aesthetic of the lobby, the animations, the sprays, the characters, the customizable parts, it all just looks so bland and reminiscent of a dozen games I've seen before. The customization parts free players get are very limited too, giving you little incentive to get started on a paid battle pass. Your characters have dialogue as you ping items and move through the stages, but these lack any of the personality that the same dialogue lines in Apex Legends have. This, much like many of the open-world RPGs of the last generation, is so generic that it becomes entirely unremarkable, regardless of how polished and pretty it is.

When finishing a game of Hyper Scape, even when teaming up with friends, I just don't want to play another round. My part chat pipes up with suggestions of Apex Legends or Fall Guys, and I agree and don't look back. Hyper Scape isn't a bad game by any means, but in a market with Fortnite, Call of Duty Warzone, Apex Legends, and more, it doesn't feel like there's a place for it.

Hyper Scape is a polished and pretty battle royale, but it is also bland and generic from start to finish. In a market already saturated by free to play shooters to try, Hyper Scape should be an afterthought. It doesn't have the confidence or the personality of its competitors, and it's come onto the scene far too late. There's a lot to like about Hyper Scape, but you probably won't find yourself playing it for long.