Horizon Forbidden West Review – Bigger and Better in Every Way

For a long time, Dutch developer Guerrilla Games was known to PlayStation gamers as the maker of Killzone, a gritty first-person shooter franchise that had its heyday with the second installment released for PlayStation 3. I was quite the fan of that IP, and I do hope it returns someday (we do know that the studio is juggling a second project, after all), but I am an even bigger fan of open world action roleplaying games. Horizon Zero Dawn rightfully propelled Guerrilla much higher than Killzone ever did with regards to both critical reception and commercial success; the question, though, was whether they could replicate this with Horizon Forbidden West.

After playing the sequel almost non-stop for the past two weeks, my answer is that it was no fluke. The developers have managed to craft yet another game that's just as captivating as the original, proceeding to make it bigger and better, even though there's no major open world innovation to be found genre-wise.

First things first, though, as there's a lot to unpack. Horizon Forbidden West is literally brimming with content. According to the PS5, I've finished the game after exactly 70 hours of playtime. Guerrilla's developers were a bit coy on the topic of longevity pre-release, suggesting that the game would be about as long as Zero Dawn, but that was really underselling it, given that data from HowLongToBeat reveals the first game (without the Frozen Wilds expansion) could be completed to 100% in just 60 hours. Meanwhile, in Horizon Forbidden West, I've still got over twenty tasks left to do between side quests, errands (briefer side missions), and other types of content. 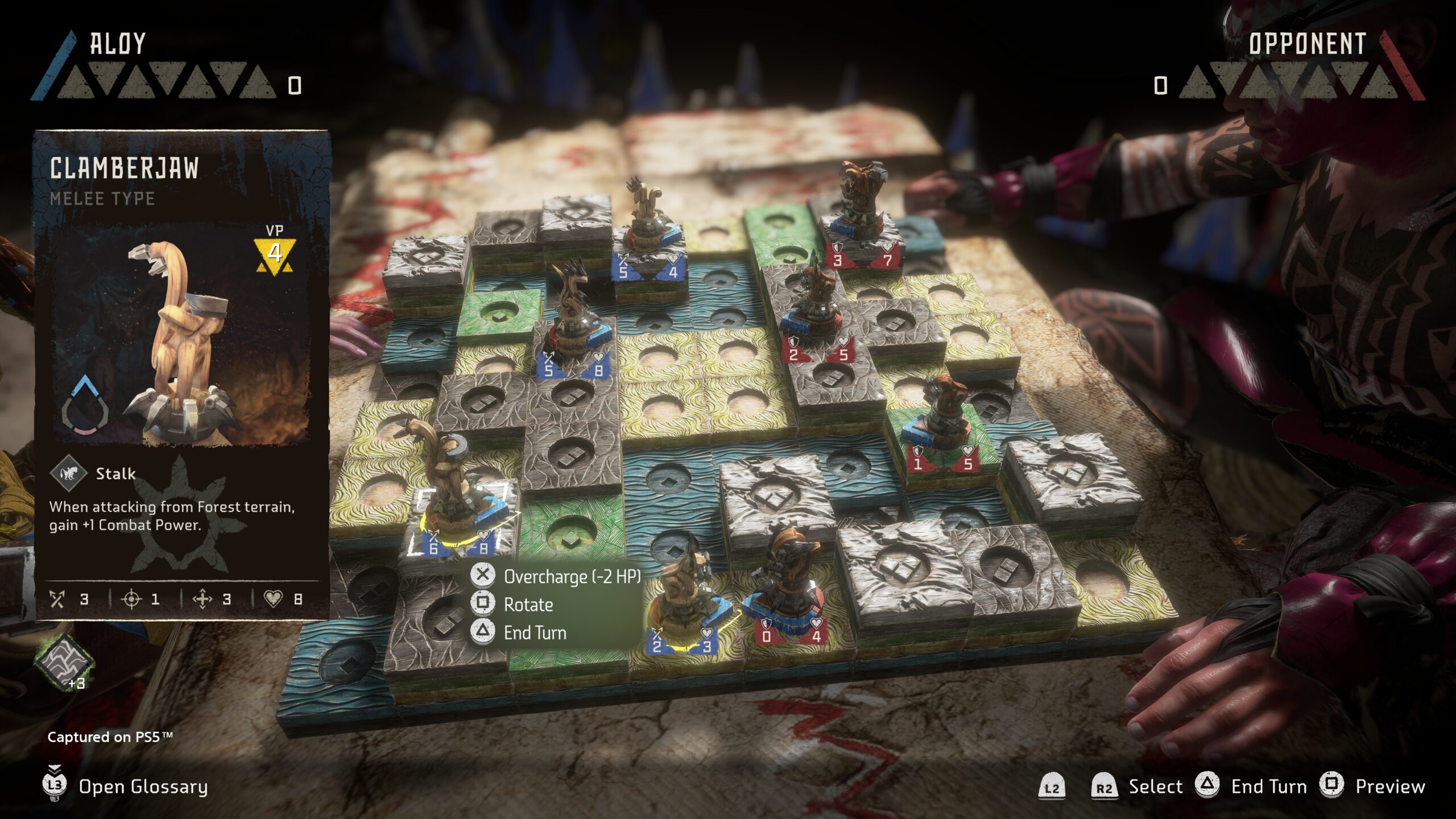 These include stuff already seen in Zero Dawn, such as fighting through various melee pits and hunting grounds, climbing Tallnecks to discover points of interest throughout the region, dismantling rebel operations at outposts/camps, and infiltrating Cauldrons to unlock machine overrides. But there are lots of brand new activities, too, such as the chess-like minigame Machine Strike (clearly inspired by The Witcher's Gwent when it comes to its embedding into the world), the Gauntlet Runs (track races where you'll be using a Charger to be the first to the finish line by all means necessary, including stunning competitors with arrows or shock mines or picking up the nitro-like Blaze boost, in a nod to arcade racing games), Salvage Contracts, the endgame Arena (a challenge to survive against increasingly tough machines to gain medals that can be traded for legendary gear), and Relic Ruins.

The latter activity highlights what is, in my opinion, one of the most significant improvements in Horizon Forbidden West: the puzzles. Oftentimes, you'll really have to scratch your head to understand how to get into the next room. The same applies to other points of interest, such as Sunken Caverns (though you'll need to get the diving mask to explore most of those) and other mini-dungeons scattered throughout the whole map. Puzzles in Horizon Forbidden West are nearly on the same level as the most recent Tomb Raider games, which is saying something as they were always a trademark feature of that franchise.

Of course, combat remains one of the main things you'll be doing in Horizon Forbidden West. Fighting machines as Aloy is still quite different from most other games, given the focus on archery-based ranged combat. While the game does make an effort to expand melee combat options in multiple ways, including several additional moves, you won't be able to use all that against most machines without getting crushed, as I learned the hard way after dedicating the initial skill points to the Warrior specialization. Additionally, fighting against other humans won't really require you to finely use your melee spec due to the relatively low challenge on average, and there's still no ability to parry. 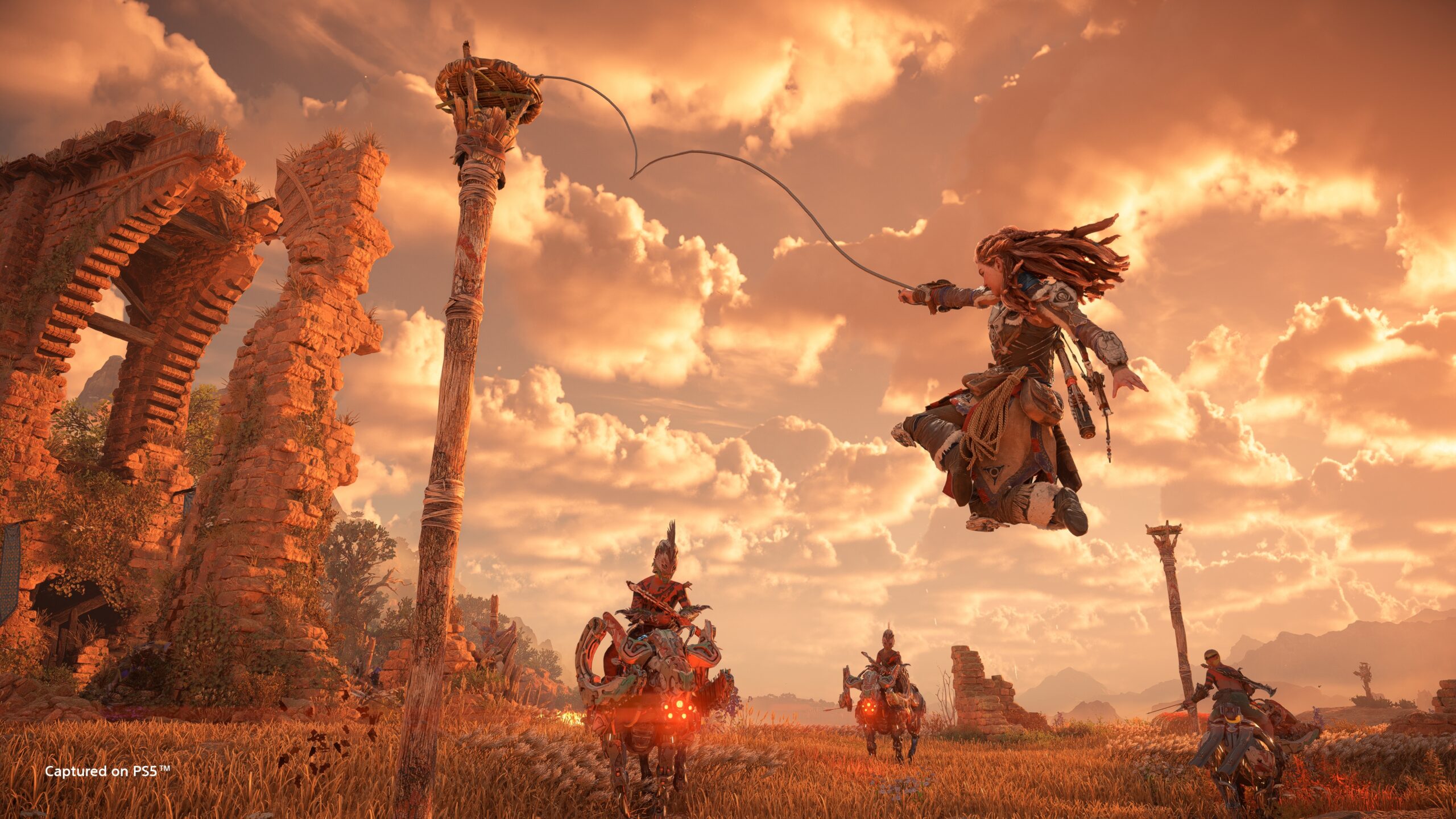 Horizon Forbidden West's most exciting combat is once again experienced against machines. There are dozens of them, each with various strengths and weaknesses, which you'll have to properly exploit when playing on harder difficulties (which I did, and I do recommend it to maximize the enjoyment of your own playthrough).

As if to further underline how the game's core is ranged combat, the brand new weapon techniques allow Aloy to spend Stamina to execute various additional effects depending on the bow equipped. For instance, with Sharpshot bows, she can take a kneeling position to charge an incredibly powerful shot, while Boltblasters let her unload an entire clip of ammunition all at once.

There are also Valor Surges, which are essentially an Ultimate bar filled through various means during combat. Unfortunately, you can only equip one at a time, and there's no quick way to swap them during combat except by pausing the menu and going through the skill tree again.

Needless to say, there are lots of ways to experiment with different combinations of gear and skills, allowing players to create their own playstyles. I do have one minor gripe, though: there's no transmogrification yet. Some of the coolest looking armors aren't necessarily ideal from a perk and stat standpoint, and it would be great to be able to unite both form and function as in most RPGs. 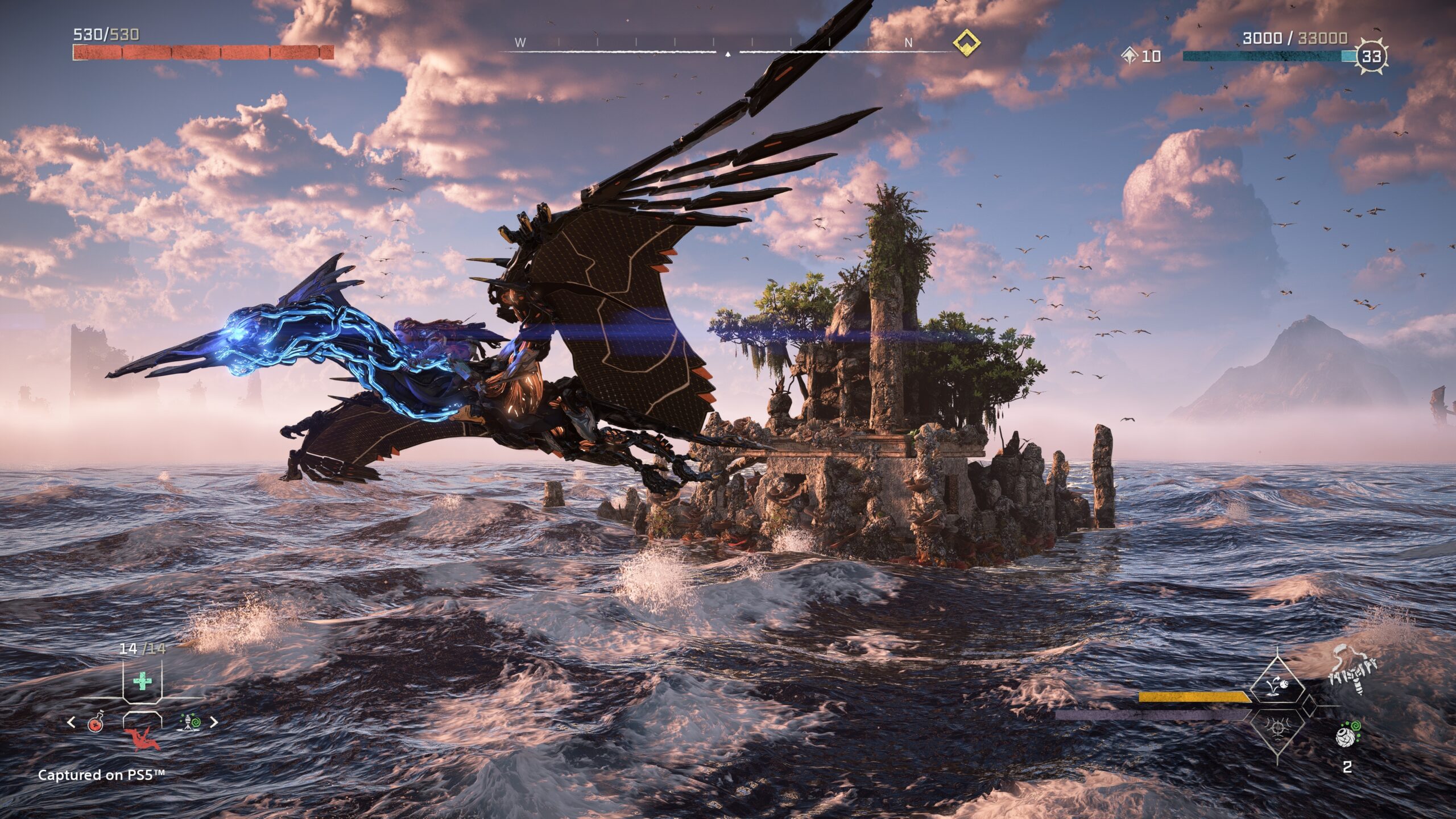 The traversal options are also much improved in Horizon Forbidden West. You can grapple to certain predetermined points (even in combat, which is extremely handy to escape the grasp of a rampaging Ravager), and you can also use a Shieldwing to glide down from the higher ground.

However, the real gamechanger is only unlocked towards the end of the main quest: flying. That's right; you'll be able to override Sunwing machines and summon them to fly all around the world, which is incredibly cool in and of itself. You won't do any combat while flying (despite there being a barrel roll move), which might be a tad disappointing to some, but rest assured that just experiencing this stunning post-apocalyptic world while airborne is an awesome feeling. I do wish this would have been unlocked earlier, though. 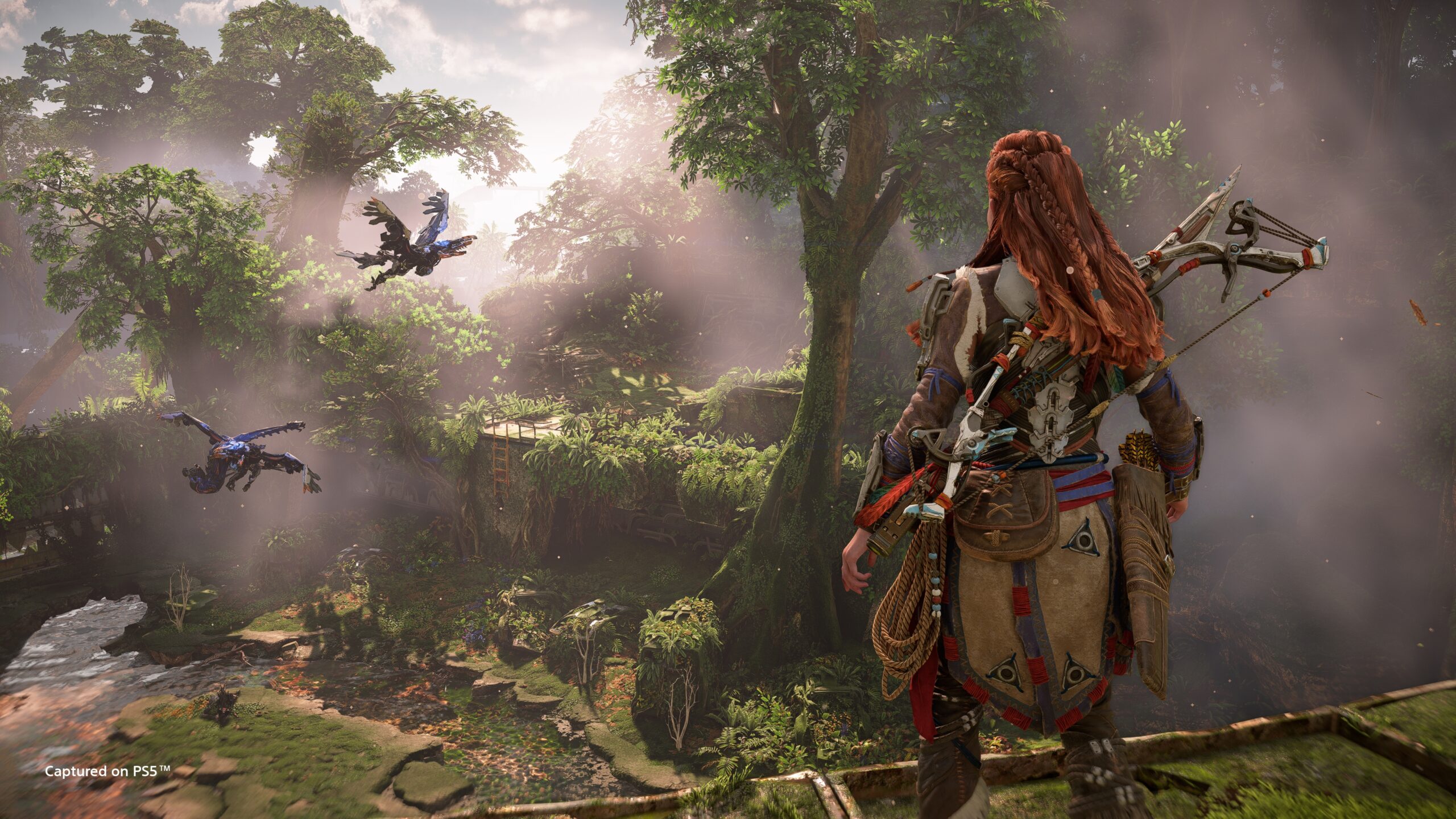 That aforementioned long playtime might be partly due to the many cutscenes and dialogues, by the way. I don't have any hard data for comparison, but I reckon there's a lot more in Horizon Forbidden West, particularly if you want to go through every dialogue option to learn absolutely every single thing about a character or a faction. As a lore buff, I loved this, and it reminded me of Mass Effect a bit (alongside something else from the ending, though I won't spoil that). You can often come back to chat with fellow allies after something happens, gaining new perspectives and views on the unfolding events. Additionally, there are even companion quests and a proper headquarters, just like in a Bioware game. Narratively, this is explained with Aloy slowly coming to understand the value of relying on trusted friends, whereas in Zero Dawn she often preferred doing things by herself. It ties well with her necessary growth as a character, that's for sure. She isn't the lone former outcast turned fearsome warrior anymore; she needs to become a commander.

The story itself starts slowly but quickly ramps up to unexpected heights in the latter part. The plot eventually goes to some interesting places; some big revelations in Horizon Forbidden West are sure to get fans talking on Reddit and other forums all over the Web. The quality of side quests has increased, too, even though it's still not up to the gold standard of The Witcher III: Wild Hunt. 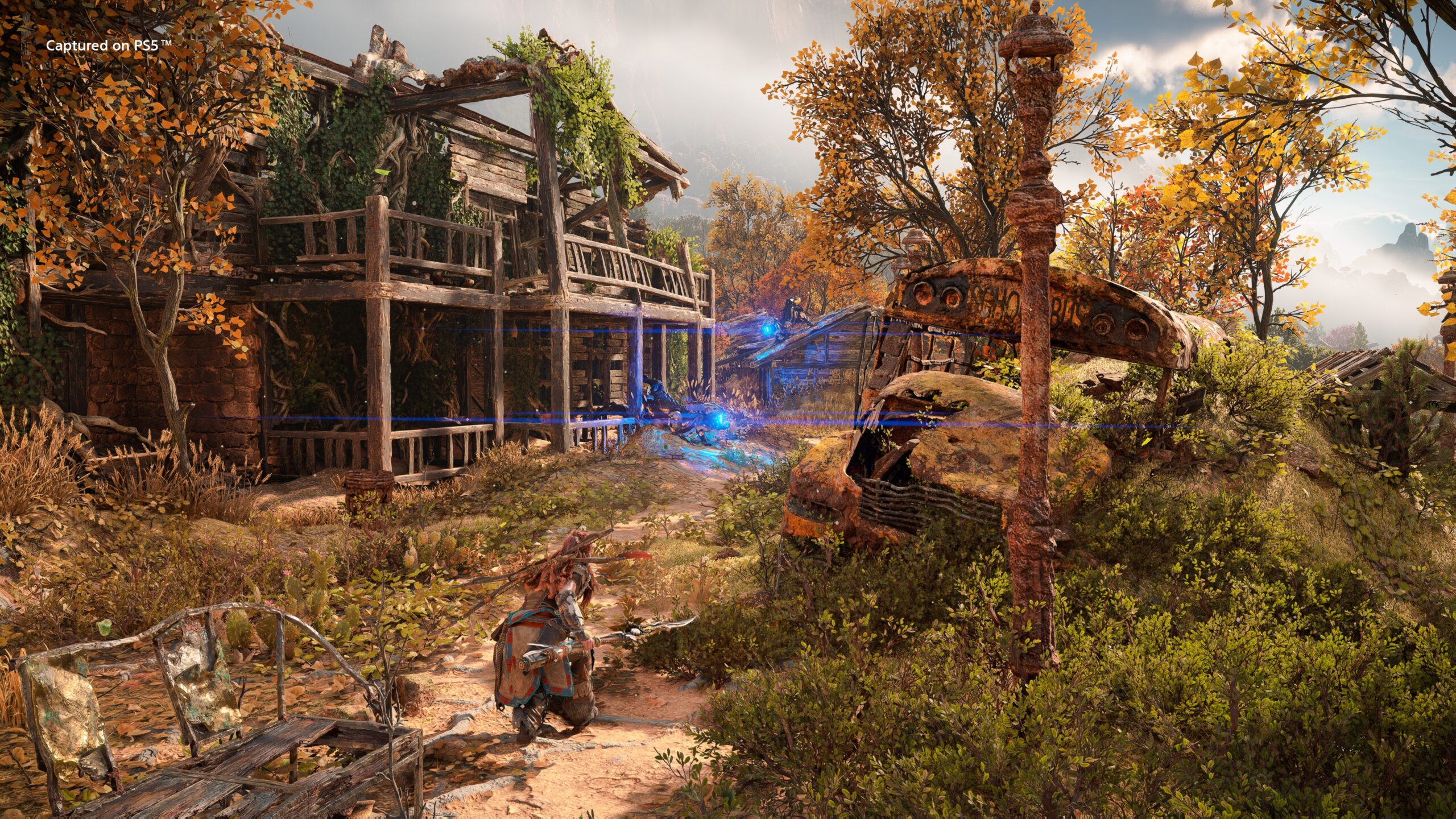 Weirdly enough for a game made by Guerrilla, one area that's not a complete win is the technical side. Don't get me wrong, Horizon Forbidden West looks great for the most part on PlayStation 5, thanks to the improved lighting and character models, but the Performance mode does come with significant downsides. The base resolution is noticeably lowered to ensure that the frame rate remains smooth, which it does with very few exceptions. However, the aliasing introduced in some scenarios (mostly outdoor environments during daylight) was honestly a bit distracting. Even so, it was a no-brainer simply due to how much smoother it felt than the Resolution mode, not only during combat but during the world's exploration, too. Just moving Aloy around feels so much better at 60 frames per second, that's for sure.

All this did, though, was make me acutely aware that there was one platform where we could have had it all - PC. After all, Horizon Zero Dawn got NVIDIA DLSS and AMD FSR not too long ago. High-end rigs will undoubtedly be able to handle Forbidden West at 4K and over 60 frames per second without any impact on image quality, but who knows how long it'll take for this sequel to appear on PC. Given Sony's increasingly multiplatform plans, I wish the inevitable third installment could be unshackled by any console constraints, launching day and date on PC. We'll see if that will be the case.

Lastly, I do have to praise the variety of biomes seen in this sequel, as well as the quality of both acting and voice acting, thanks to some great and renowned talents. The soundtrack is excellent, too, and well worth listening to even when outside the game.

Horizon Forbidden West is a worthy sequel to Zero Dawn in every way, proving that Guerrilla is no one-hit wonder when it comes to the action RPG genre. This huge and beautiful world has an incredible amount of things to do and most of them are really fun, thanks to improvements to combat and traversal. The game also features another great storyline that will get fans talking about the inevitable sequel.