Everybody who has ever had a chance to drive a car remembers those horrifying first moments where the theory stops and you're actually in control for the first time. You look around, horrified, spotting all the things you're going to inevitably crash into. Plant life, buildings, children - it's like a mini-game from Point Blank, only played out at a far-too-fast four miles per hour. Hardware: Rivals feels a bit like that.

This is the first vehicular combat game I've played that doesn't seem to want you to kill other players. The health bar is high, the speed levels are low and the maps slightly too big, and you really have to work if you want to do any damage. 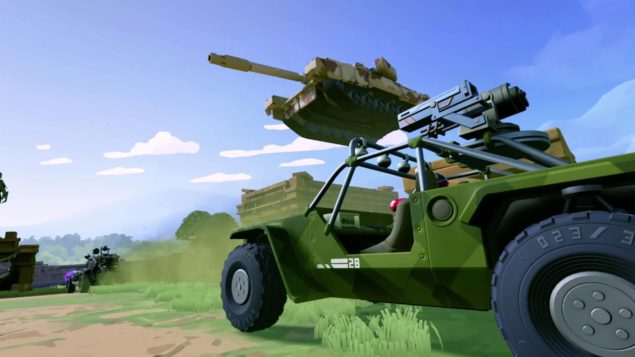 That's not to say that it isn't fun in its own special way. It just feels like Twisted Metal for Sunday drivers, for people that want to breathe in the atmosphere more than the smell of their rival's burning carcass, those for whom 'sweet revenge' is throwing a cream cake at someone who has annoyed you.

To start with, you can pick any vehicle you like, so long as it's one of two Jeeps or tanks. The selection is rather limited and not especially well balanced. Jeeps are speedy but don't do much in the way of damage, while tanks can be cumbersome to drive but can destroy an opponent in only a handful of shots.

One of these things is not like the other. It can take ages to destroy your opponent with a Jeep. I've followed enemies for minutes without them bursting into flames. Speed is handy, but on the default weapons you've got no chance whatsoever.

Of course, in theory that means you can get to secondary and special weapons more easily, but I'm not sure that works out. The difference in damage is so vast that the speed doesn't quite make up for it.

That doesn't mean that they're utterly useless. Jeeps are definitely the more enjoyable vehicle to drive, it just feels like that enjoyment is punished by not being as good a ride.

Secondary weapons are just as strangely balanced. Some of them will do next to nothing, while others can lock-on and destroy in a single hit. As people quickly learn exactly what they have to do to win every game, matches become one-sided. The vehicular combat becomes more about getting to a certain place and picking off people from a distance, only pushing the accelerator to top up. Within five or six matches, I could see individual players learning the tricks, and it'll only make the game more dull as time goes by. 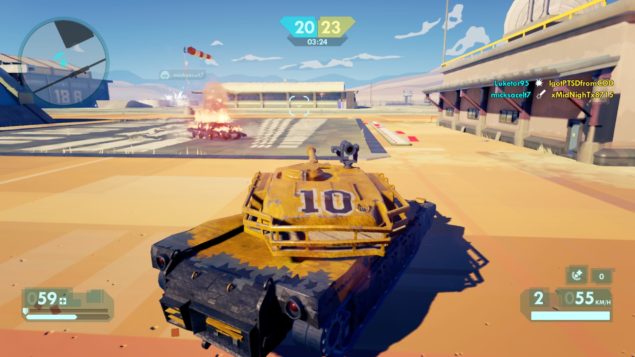 Special weapons pop up every so often and, big surprise, aren't all that great. Each level has its own weapon, some of which kill everybody outside a certain location, others which freeze and kill every enemy on the ground floor. I think the developer envisioned people fighting for the power-up, then fighting their way to a bunker or safe space, but it feels more like a traffic jam than a frantic fracas.

Top players will know exactly where the best secondary weapons are and will use them over and over. The occasions when I topped the leaderboard was when I was happy using the same secondary repeatedly, or when I held back and picked off opponents others had worn down.

A lot of this stems from the very high amount of life each player is given, and from the fact you can recover it with pickups. You can even pick up armor to make yourself more indestructible. Of course, these aren't bad things in and of themselves, but combined can be quite frustrating. If you're the first person to die in a small team game, you've got no chance at all.

Acceleration is a problem, even with the perk that helps speed things up a little. Even with the Jeep you never feel like you can escape from a bad situation, which I suppose should be the point of picking that particular vehicle. It doesn't help that the controls don't always feel very natural. The challenge is aiming and steering at the same time, obviously, but the weapons layout and the very specific way you need to hold the controller - you need all four shoulder buttons in action at all times - isn't necessarily how many of us play.

There are only a few game modes to check out, so variety isn't going to come from that. There's various types of Deathmatch and a few other options, but little else. You can change the color of your tank or Jeep though, for what that's worth, and you can customize with in-game currency that you pick up after matches. There's a lot to buy if you fall in love with the title, so you'll be kept going for quite some time. 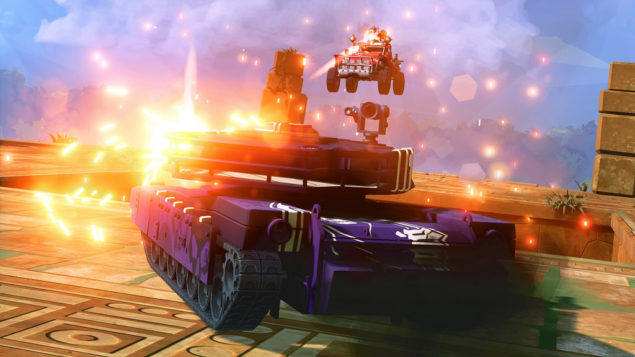 Graphically it's a little underwhelming, but the colors and unique locations almost make up for that. There's nothing that's especially distracting or ugly, but everything feels flat and a little bit too clean. The maps are a little big, although that's always going to be down to personal opinion and playing style. It's a pretty regular thing for fights to take place in certain places, and it's not unusual for it to take ages to find opponents.

At its best, when both teams are full and people are playing rather than sniping from a distance, you can have a pretty good time. It's still fairly shallow and it's not going to change the world, but Hardware: Rivals is by no means awful, despite the mountain of negativity above. It's just decidedly average, a vehicular combat game that does nothing to go above and beyond having cars and weapons. There aren't any game-breaking bugs and you can enjoy it for a little while without too much in the way of disappointment.

While it's on PlayStation Plus and there's enough enemies checking it out to make it worthwhile, there's no reason not to see what you think. You get a few games, earn a few trophies, blast a few enemies off and then probably move on to something much, much better.