You may or may not know that Halo was originally conceived as a real-time strategy game. What you probably don't know is that Halo Wars was the final release of Ensemble Studios (Age of Empires). Sadly, even prior to the release of Halo Wars they had been marked for closure. Despite strong sales and a good reception, the writing was on the wall and even the game seemed to be a one-off. It was a huge surprise, then, for Halo Wars 2 to be unveiled and that it's being developed by Creative Assembly (Total War: Warhammer).

Despite the unsavoury tactics of remastering Halo Wars and releasing it as a 'bonus' for the Special Edition of the sequel, aping Activision and the hostage taking of Modern Warfare remastered, it's still nice to see a game that was never released on the PC finally make its way over. With that little moan over, it's time to crush the Covenant and review Halo Wars: Definitive Edition.

Why Microsoft have made it so difficult to capture screenshots and videos of their games I'll never know. It's nothing I'll hold against the game, but something I need to moan about. Even the capture options given as part of Xbox/Windows Live settings don't work here, the game outright telling me that video capture isn't allowed with the game. I managed to capture some video footage which you can watch below, but zero screenshots despite multiple attempts with a variety of programs. Sure, all that means is you don't get any custom screenshots for the review, but I do this for you.

Beyond small complaints and semantics, it's hard to really say a great deal about the game. Halo Wars was released seven years ago and nothing has really changed. Reports of the Xbox One version puts it as simply a visually improved copy with nothing altered in the gameplay. However, and this is where this review matters, it's the PC release that truly counts.

The few changes made to Halo Wars: Definitive Edition bring over things that the game was sorely missing due to the limited nature of a controller. Everything from hotkeys, grouping units and the ability to just get around the battlefield easier. It's actually quite surprising how much you miss the basics when they're taken away from you. Despite how well Ensemble made it, Halo Wars could never really capture what was needed the first time out. It was worked around through basic selection options using the controller, slowing the game down and adding limitations on unit count.

Interestingly, both aspects have been kept the same. Keeping the game at a slower pace makes a great deal of sense as the Xbox One release still has the controller limitations. What doesn't make sense is the unit limitations. Halo Wars was always going to have limitations due to being focused on controller usability, as well as to lower potential drains on the dated hardware of the Xbox 360. Adding onto the need for a unit limit was the fact that the original release looked great for its time, further drawing on the system. However, the Xbox One and PC are more than capable of running the game. Even with the graphical upgrade, there's no real need to keep the unit cap. A small change could have gone a long way.

Change, or the lack of it, is the real problem. A definitive edition by definition is a version that defines a product, the game at its best. What that means is that changes can, and should be made if it's to make the game better. Removing the unit count would have been perfect for this. Since there's been literally no gameplay changing features the proper subtitle of the game should be Halo Wars: Remastered, rather than Halo Wars: Definitive Edition. Simply including mouse and keyboard support isn't really enough to count.

I'm possibly sounding too negative and that's because there's very little that can be said about the re-release of a game. Especially so when the only changes are aesthetic and through the inclusion of mouse and keyboard support. I don't mean to be, though. Halo Wars: Definitive Edition is actually a good game and you realise this even more so when playing on the PC. Only a few tiny issues can be found with the game, the worst example is controlling special abilities with the mouse. The game has a tendency to jump a little too much or outright ignore where you want it to go. All things considered, it's a minor flaw in the grand scheme of things.

But what of the game itself? The campaign is set as a prequel to the main Halo installments, showcasing the first encounter with the Covenant and eventually the Flood. Its major problem is that it's fairly short, taking around 8-10 hours to complete the 15 levels. This is primarily due to the limitations when the game was originally made. Levels had to be designed to make the most of the resources available while staying within the limited capabilities of the Xbox 360's hardware. As such, they're fairly small and limited to a middling number of enemies. There's never any real sense of scale or grandeur.

However, it has a decent level of replay value due to a number of side objectives to complete as well as skulls and black boxes to collect. Skulls are unlocked through meeting kill objectives found in every mission and then collecting the skull. When collected they can then be activated at will, each of them having different effects. The black boxes, on the other hand, unlock lore of Halo Wars, adding to the in-game timeline.

Giant Scarabs that crawl across the land, dominating everything in their path. Huge gunships, the Vulture, can fly above the battlefield launching rockets. All the while a Spartan is breaking into a covenant tank while both sides are firing away, killing each other with merciless abandon. This is when Halo Wars is at its best. The slower pace actually adds some gravitas to the action within the game as it makes the units feel solid, the damage real. This is where you'll get a sense of something real happening, particularly in the larger of the skirmish maps.

Skirmish and Multiplayer are the modes where this is shown best, particularly in the larger matches. As a result of no changes having being made, 3v3 is currently the largest game available. There are five game types to play, from the regular deathmatch style, to the interesting tug of war where your aim is to consistently hold the strongest army on the field while whittling down your enemies.

Sadly, online multiplayer isn't really active on the PC, though I can't speak as to the Xbox community. Still, there's a great deal of enjoyment to be gained when you can find a game, or at least in skirmish.

Ultrawide monitor support is where I'm actually most surprised by this version. There's no doubting the fact that the game runs smoothly and Halo Wars has never really looked bad, benefitting from crisp, simple designs. I'm not one to normally bring up settings either, but there's no option to select your resolution and other options are basic at best, which is a letdown.

All things considered, enough work has been done to make Halo Wars: Definitive Edition stand out against the original release. There's still a large amount to indicate the origins of the game, particle and lighting effects show their age in particular, as well as the unit limitations which desperately need raising. Honestly though, it's aged well and that's why it's still more than passable. Halo Wars: Definitive Edition isn't really a definitive edition, that much I will say. Rather, it is a remaster of a seven-year-old game while also adding PC support; judged on that account, it performs its task pretty well.

Note: 343 Industries have indicated there might be some enhancements ahead of February's full launch since this is Early Access for those who've pre-ordered Halo Wars 2. The review will be updated as and if necessary to account for any changes by release. 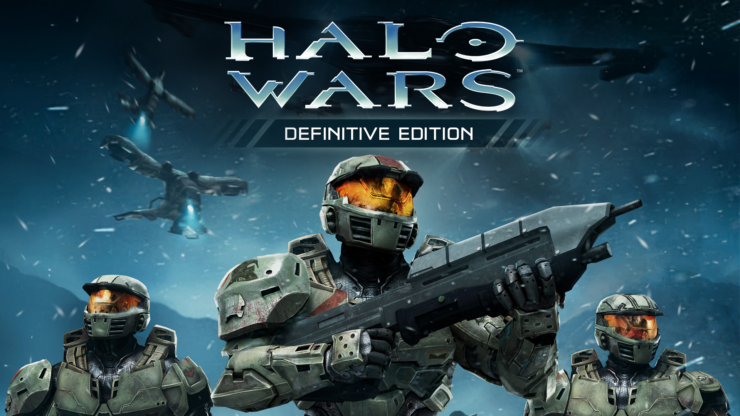 Halo Wars: Definitive Edition acts as a good remaster of what has shown itself to be a game that stands the test of time fairly well. Still inhibited by restrictions implemented due to its Xbox 360 origins, it still manages to be fairly enjoyable and look pretty decent while doing it. While technically in early access until release alongside Halo Wars 2, the game desperately needs these limitations removing to allow it to stand on its own as both a decent Xbox One and PC release.