I would argue that Halo Infinite could and should be marked as a fresh start to the series, even though it's the third of 343 Industries titles and marks the last of the originally planned "reclaimer trilogy". This trilogy is now a saga. Why could it be marked as a fresh start? Because it feels like a jump in the same way that Origins was to Assassin's Creed, only this is far more polished and well-designed.

I'm not going to say that this has brought me around to the Halo franchise in some magical way; it hasn't. Story-wise, it is distinctively lacking. The Halo universe will never have good storytelling unless you absorb the spin-offs, cartoons, novels, comics, audiobooks, toys, and branded bedding. As a result of names of planets, events and their supposed importance, Master Chief and the whole universe interests me less than the dust gathering on my Nintendo Switch.

There's one difference here than from the series' history. Halo Infinite has found a way to make me care about John the Cook's beat to beat actions.

Let's get the obvious points out of the way; this isn't a way for somebody new to get into the series in any narrative sense. I'm not even sure if it's suitable for current fans who have absorbed everything. Halo Infinite has you jump back into the boots of Agent 117 as he's rescued from a long cryogenic sleep, having been floating around in space for a while. There are no introductions or explanations beyond how you got there. You either know who these characters are, who Cortana is, why you're at war with the Banished, what the magical space ring is, or whatever any of these things are.

You're a big green suit of armour, impervious to the cold vacuum of space, and you're the good guy. It's time to do good-guy stuff, fight the baddies, and do many things along the way. The pilot thinks you're crazy for wanting to go down to the magical space-ring with a considerable chunk missing, swarming with things wanting to kill you. He advises going as far away as possible because almost all humanity is dead, and you've only just been rescued from space-sleep after being butchered by Atriox (from Halo Wars 2 and a dozen non-game options) in the opening cutscene.

As a follow-up to Halo's 4 & 5, this continues the maligned story of Cortana and her green puppet. This time, the puppet becomes the master of sorts, finding and then bringing along yet another AI he decides to pop into his head. This new AI, called The Weapon, is essentially Cortana-again, but without the baggage that came from every other Halo game. It's scared most of the time, relentlessly chirpy the rest and I don't mind it.

If only anybody else had that bit of character to them. Sergeant Slaughter is still the stalwart, incredibly dull hero of the universe with absolutely no personality, growth, emotion, or meaning. The pilot is amusing and has some admirable traits, such as logic, but falls into line with the chief. Escharum, the big bad in charge of the banished on this Halo, or at least this part, gets rid of all common sense, tactics, and more in what amounts to a giant pissing contest.

I'm saying I had no emotional investment in this game. Even though the story begins in medias res, meaning it's more accessible for people like me, it still faltered at most steps to ingratiate me into its universe. It does mark an improvement on previous titles, having some self-contained elements, but it's still over-reliant on other media. What did work for me? The gameplay.

You're likely aware that Halo Infinite is an open-world title. I wondered how 343 would manage this while keeping the constant linearity and spectacle the series is known for delivering. They've managed this well by keeping it semi-open-world while putting story-beats and spectacles within directed areas. Think Metro Exodus in style, only it's just one larger open area rather than multiple smaller ones. All of this allows you to infiltrate big bases, destroy massive structures, fight bosses, and do whatever else you've come to expect from the series.

What also helps is that 343 haven't gone full AAA open-world by placing random collectibles all over the shop. There are no random feathers here, with collectibles reserved to multiple audio logs from all sides of the conflict, Spartan Points that you use to level up Johnny Cage's skills and shield. Such skills include the grappling hook, by far the best addition to Halo when combined with the more open area, a threat sensor, thrusters, and more.

There are other gathering elements, Halo Infinite having you earn valor from completing side tasks such as rescuing bands of USMC soldiers, taking down propaganda towers, destroying other establishments, and even taking down high-value targets. This valor, as it grows, unlocks more weapons and vehicles to summon while at a forward operating base (FOB) that you capture by killing all the Banished that happen to be there. Capturing these also reveals the nearby events in a Ubisoft tower way, but far better as it makes narrative sense.

Travelling to these, and manoeuvring anywhere around Halo Infinite's open areas, can be done on foot or through the many vehicles found or summoned throughout. The vehicles also, when used right, can make expeditious work of most places you attack. You can also bring along some AI soldiers with you, though I've had them break a few times, not move when they say they're going to follow me (or jump in my warthog) or, on foot, run away from the battle. The reality is that they're a poor substitute for another player.

Naturally, this brings us to the combat in Halo Infinite. With a vast host of weapons, including unique versions gained from the corpses of the high-value targets, you'll rarely find yourself having some fun killing the enemy. I will admit most are useless, but that's because they belonged to the useless enemies. It's by far the best part of the game, even when you find yourself out of ammo and scavenging the corpses of the fallen for something to take down the next brute bounding towards you.

That's it. That's the fun part. I've already covered how bombastic it is, and it looks and sounds great while doing so. 343 Industries have certainly made this feel like the best Halo game, and they know that combat is and should be the focus, so they need to ensure you're not stuck too long away from the action. They manage this for the most part, with only a few dull moments, such as hunting for the collectible.

All I can say is that I wish I had another human around in what is a very rare comment from me. The delaying of the co-op has undeniably hurt Halo Infinite. 343 Industries made certain combat sections with more than one player in mind; that's clear to see. Also, vehicles have always been designed with a second player - on the gun - in mind.

At this point, I could talk about multiplayer. Only I don't need to. You've heard all about the shooty bang bang fun run in the gameplay; it's the same and feels the same there. Not only that, you've likely been playing it already and know if you like it, or you're like me, you've played a bit but have no interest in playing more. That and I would rant about unlock systems or something along those lines. So, if it pleases you, imagine this is a review of the campaign.

I've been pretty clear on how I consider the story one of Halo's most considerable pitfalls, with everything else being generally top-notch. I would be remiss if I didn't mention a few other minor annoyances. I had a few bugs here and here, such as characters getting stuck in scenery, and once or twice I found myself getting shot through solid objects. Minor annoyances. Another, which is quite possibly the fault of my PC (so not included in the scoring) and why I'm late in getting this review out, is that my installation of the review build disappeared on me, requiring me to reinstall it over again.

One petty quibble from me, though not one I will hold against Halo Infinite's score, Microsoft, in their infinite wisdom, have decided that saves from this review build won't continue into the full release. It's irritating as it means I've lost a hell of a lot of progress in the side objectives of the game. I've long-complained about open-world games that feel like they have content for the sake of content. Halo infinite's somewhat pared back and first-baby-steps into the open-world keep it feeling like a game I want to complete.

If anything, that's an accolade for Halo Infinite and one that I will praise. No other Halo game has ever made me want to complete it; I've just finished them for the sake of having done so. In the past, I've constantly stated that - outside of gameplay for a console shooter - Halo is one of the most overrated series in history and average at best. While the story (game only) is still shallower than a puddle of sick with little character development, there's another leg to carry the weight. 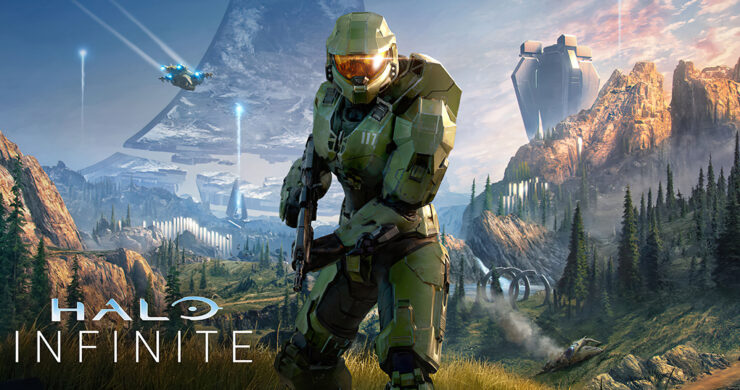