When the gameplay to Godfall was first revealed at The Game Awards last year, players were given a glimpse of what next-generation gaming would look like on PlayStation 5. Through the promises of fast-paced action and enough loot to satisfy the most miserly of players, there was a lot of hope riding on this PS5 launch title. Now that the game and new console are nearly here, does Godfall live up to the hype, or is this a launch title that you'll pick up and quickly forget about in a month?

As a loot-focused action RPG, you can immediately disregard the story bits and just focus on beating up enemies and gathering more loot if that's what you're into. In short, the player's brother Macros is seeking to ascend to godhood and attain unlimited power. It's your job to stop it and somehow you're the only one capable of doing so, nevermind the multiplayer aspect to the game. The story bits that are fed to the player between missions lead up to an interesting showdown between the player and their soon-to-be-ascending-to-godhood brother but the story often feels like just a justification for going upwards to new realms and fighting off different factions of foes, rather than the driving force in the narrative. You could just as easily skip the cutscenes or focus your attention elsewhere and come back to notice a new boss to fight and get the same level of enjoyment out of the story. Similarly, the hub world with its two NPCs to interact with and get your missions and gear upgrades from are only really there to push the quest for more loot along rather than providing any meaningful support.

Where Godfall excels is in the weight and flow to combat. This really is a next-generation brawler with a big budget to match. Light and heavy attacks can be woven together along with the various special attacks that operate on their own separate cooldowns (the first upgrade new players should unlock is the ability to use Northern/Southern weapon techniques via L2+attack). The flow of combat revolves typically around using light attacks to chip away at an enemy's health and full up a secondary health bar that represents the enemy's breach gauge. Once this is filled beyond their current level of health, any heavy attack will turn into a Soulshatter attack and explode the enemy with massive damage that hits the enemies around them.

With only five weapon types to choose from, your arsenal of tools is rather limited in Godfall. In total, you'll be able to equip: a longsword, greatsword, polearm, hammer and dual blades. Each of these feels completely different from one another in terms of moveset and weapon techniques so if you find yourself growing quite fond of one weapon type (I stuck with the greatsword almost exclusively once I found a legendary one at level 10), there's little reason to pick up any other weapon save for a higher level and DPS.

At the same time, the Valorplates that make up the core classes of Godfall are fairly limited in their effectiveness during the first half of the game. Aside from the one you start with, you'll need to gather materials from fallen soldiers or from material caches scattered throughout the three realms to craft these Valorplates. Once unlocked, they can be freely chosen from the hub level and given their own loadouts of gear and augments (your skills stay unlocked no matter the class). Each Valorplate has its own unique voice-overs during cutscenes and regular gameplay but that's the main difference between them beyond the cosmetic looks. Each of the twelve that players can choose from have a unique passive statistical bump, from delivering more of a certain damage type or a flat critical hit chance increase (this will be the last Valorplate most characters unlock given the materials required) as well as a unique Archon's Fury ability, used on the L3+R3 and gives players a moment of temporary invulnerability along with whatever powers their Valorplate provides.

When you start digging deeper into the min-maxing systems of Godfall, you can start layering in Augments. After level 20, these skill stones slot in another series of passive bonuses that will make the biggest factor in determining a character's build. Different Valorplates have different slot types available, so just because you're running a Might-focused build doesn't mean you'll be able to slot in every Red augment you come across if your current Valorplate doesn't have the augments slots available.

The downfall of Godfall being a loot-driven game is that more often than not, you'll run into loot that just isn't very meaningful. Rather than having any piece of truly unique gear (from what I've seen from the campaign so far), every weapon and equipment that I've come across in my dozen or so hours in Godfall seems to be of varying rarities. The rarities seem like they only add in an extra passive benefit but stacking these is one of the easiest ways to power up your given Valorplate. A purple item might share two passive traits while a legendary version will bear three. You can upgrade your gear to have higher statistical values up to five times with a mid-level upgrade allowing players to increase the effectiveness of one given passive trait. By enchanting a piece of gear, you can increase its rarity level by one, thus conferring that additional passive trait. Both of these forms of upgrading your gear are incredibly costly and will require loot harvested from killing the many minibosses scattered throughout the three realms.

As you're leveling up, upgrading a weapon or ring three times to get the boosted passive effect seems to be the sweet spot from what I've found. Loot drops with such frequency during the regular campaign grind that there's rarely a reason to stick with any one piece of gear if the level requirement is a few levels below your current standing. Perhaps this will change with the endgame grinding and Godfall will offer up some current loot, but with how much I've already played of the game, what loot is presently available just doesn't hold up for a loot-driven game published by Gearbox.

That push for levels and better gear sets up the core of Godfall and the game knows to gatekeep the player every so often and push them to do side missions for more loot. Every so often, the game will block the player's progression by forcing them to collect sigils from one of the three (or all three) biome realms, attained through completing the various side missions that almost always end in a quick boss fight. The other main source of challenge and loot to Godfall is in the Tower of Trials, a giant tower filled with wave after wave of enemies. Every so often, you'll earn keys that can be used to unlock gateways to loot rooms and challenges. I have yet to finish the basic Tower of Trials given some spotty internet connections that kicked me offline mid-session but I'm hoping to have a go and see what rewards lay at the top once I can get back into the game again.

While the world and individual realms of Godfall are absolutely gorgeous, there's little reason to run around and engage with them. When you jump into a mission, you're instantly greeted by a compass market that points you off in the direction of your intended objective. Sure, you could divert off the beaten path and look around for chests or motherlodes of crafting goods, but what purpose does that serve? A small bit of pocket change, some currency tokens to purchase a new Valorplate, maybe a new piece of loot from a treasure chest. With how much the game pours mediocre loot on the player for completing a mission, there's little reason to explore for these various goods. Some motherlodes and floating supply caches might give you a small boost in what you need to upgrade your gear but there's just no good reason to waste your time hunting down these caches when rushing through a mission is more rewarding and more respectful to the player's time.

Godfall has a sticky issue with locking the player into their actions at the most inopportune times. If you're just mashing away the light attack button as a boss readies their unblockable move, nine times out of ten, you won't be able to recover quickly enough to dodge out of the way and will get swept off your feet in a hard knockdown that leaves the player open for a follow-up attack. Similarly, you could pause your combo in anticipation of a boss' incoming swing and attempt to roll in one direction only to get punished for making a bad read and running right into an oncoming attack. Enemies that utilize unblockable and unparryable ranged attacks in the latter half of the campaign have a nasty side effect of forcing the player to roll out of harm's way and only wind up running into another projectile instead. For a game that places so much emphasis on parrying windows and evading damage with proper dodging and spacing, the lack of mobility to cancel out of a combo and avoid taking damage is sorely missed.

If you're looking at picking up Godfall on PlayStation 5, the DualSense implementation will immediately be noticeable once you pick up a controller. Depending on which weapon class you're wielding, the triggers for attack will have a different level of tension to them. Pick up a two-handed hammer and you can feel the kinetic energy build up beneath your fingers as you ready a heavy swing. The same goes for quicker slashes with the basic longsword attack. There's a satisfying haptic rumble that accompanies these weapons and I felt more inclined to use the beefier weapon types just for that sensation in my hands. The other DualSense features, such as the motion controls and speaker, aren't used in Godfall, leaving a couple of dimensions of control out of the player's hands.

So, why is this a review-in-progress and not a finished review? I haven't been able to finish Godfall in time to get this review up due to network outages on the PlayStation Network (these should be cleared up by the time readers start getting their consoles tomorrow) and intermittent crashes. When a game promises endgame challenges and loot, it's worth taking the time to venture out and try and collect a little bit of that sweet shiny gear. Based on my current impressions, I would rate Godfall a 7/10 in the interim. The combat is going to be the star of the show and will be what players take away from this title after they pack up the disc and start on their next great adventure. If Counterplay Games can make a satisfying endgame experience that changes my thoughts, that score might go higher but in the meantime, consider this to be a rather mediocre looter with some above-average slashing involved.

In many ways, Godfall represents the quintessential launch title for Sony's next-generation hardware. It's a very pretty showcase of how a next-gen title should look and feel but it will ultimately be forgotten by the time the next great RPG comes along. There were some novel ideas at play in Godfall but I don't think I'll be coming back for another helping of loot any time soon.

[Godfall was reviewed on the PlayStation 5. Review code was provided by the publisher.] 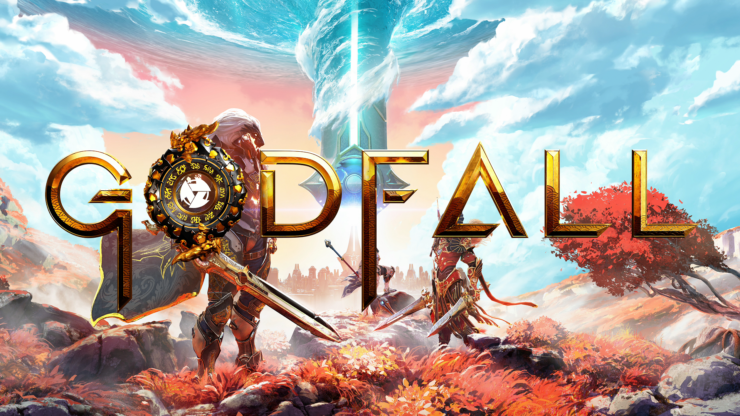 While not our final score for Godfall, we're reserving the opportunity to adjust the tally for Godfall based on the endgame content. If it somehow redeems the lackluster loot that players will carve through during the campaign, that number might change. Otherwise, go into this one looking for some quality swordplay and subpar swords.