It's been just over four years since the God of War reboot came out, marking a real turning point in the epic of the Ghost of Sparta. The 2018 game set the stage for Kratos' journey in the Norse lands with a new and, in many ways, unexpected companion, his son Atreus.

Seeing the bold Spartan in the guise of a father, in a tale where the cornerstone of the whole adventure is the relationship between Kratos and Atreus, thus departing from that relentless desire for revenge that pervaded the first chapters of the series, was indeed unforeseen. However, it also helped the series reach a whole new level of maturity, introducing fresh gameplay features and mechanics that made 2018’s God of War the masterpiece it actually is (and that we reviewed when it first came out as a PS4 exclusive), all combined with top-notch writing and direction. It is now up to God of War Ragnarok to take the saga’s reins and prove itself as the worthy successor of the 2018 installment.

Kratos’s journey in God of War Ragnarok picks up a few years after its prequel. Fimbulwinter, a cold and never-ending winter that heralds the arrival of Ragnarok, has now fallen on the Nine Realms. Midgard is buried in snow, but that’s the price that father and son have to pay for their previous actions. The passing of time also had a certain effect on the protagonists. At this stage, Kratos isn’t solely an austere and relentless warrior but also a man who tries to be a better father and a reference point for his son. His actions aim to protect Atreus from the dangers the Nordic lands and their deities conceal, but he must also accept that the boy is no longer just a kid.

Atreus has grown and is now struggling with adolescence and all the inner conflicts and doubts that come along with this age. He is ready to question his father's authority and willing to find out more about his origins and the meaning behind his other name, Loki. The boy wishes to start writing his own path but is often prey to his emotions, sometimes clouding his mind and judgment. On the other hand, Mimir continues to follow his friends during their journey across the Nine Realms, putting his vast knowledge at their disposal and managing to temper their spirits with the right words and a good dose of sarcasm.

Obviously, Mimir won't be the only one to keep us company on our journey. Different old and new characters will cross the path of Kratos and Atreus, offering them their help and support in one way or another. And it is precisely this renewed trust in his allies, this connection that often hides behind some sort of friendship and not just a mere alliance out of convenience, that makes the story feel even more authentic, proving once again that video games can be a powerful medium.

The real cornerstone of the story, however, is, once again, the relationship between Kratos and Atreus, which has been masterfully portrayed in the game by Santa Monica Studios’ writers with a more sensitive and mature approach than its predecessor. The Ghost of Sparta is finally aware that the son needs his guidance, and he must prepare him to face newfound difficulties and conflicts and the countless dangers that Fimbulwinter carries with it.

Besides that, every other story in God of War Ragnarok is masterfully crafted to fit into a greater and bigger scheme. Each character we encountered during our journey had something to tell, from the co-protagonists to the different inhabitants of the Nine Realms. The plot has its own complexity that never feels like too much has been added to the game, but instead, it gives the impression that nothing has been left behind, unexplored. From the main path to secondary quests, there is so much to learn about friends, allies, and enemies, which is undoubtedly impressive considering the vast number of characters that God of War Ragnarok presents along the way. Nothing ever feels out of place or rushed, and every little thing just has its space in the story.

Fans of Norse mythology will also be pleasantly amazed by the cast and the countless references to the Edda that this game can boast, although not every god has been added to Ragnarok for obvious reasons. The narrative rhythm is engaging and alternates stunning moments with instants of calm, useful for catching everyone’s breath and dedicating to less demanding, almost relaxing activities. There is not a single story that looks like it has been introduced just to add something more to the game, as everything connects toward the epic conclusion of this journey.

The gameplay does not move away from the tested formula of 2018’s God of War. Ragnarok, however, introduces several notable additions that make a difference in the exploration and combat phases of the game. These improvements are nothing sort of revolutionary, but they certainly help consolidate and further evolve the already convincing formula of the reboot.

Unlike the title’s predecessor, Kratos can now use the Leviathan Axe and Blades of Chaos from the beginning of the game, benefitting from a wide range of options during every combat. He can easily switch between the two weapons and use their respective abilities and elemental powers against enemies. The shield also covers a more central role in the gameplay, as it will not only serve as a defensive item but also as a powerful tool to charge foes, dealing damage to them and stun.

Each weapon can be upgraded upon collecting specific items found while exploring the map or pursuing particular missions. Reaching the maximum level can be challenging, but a run with most of the secondary quests completed before the last bits of the game should grant you all the objects you need to be fully powered up. Weapons are also supported by their unique skill tree, giving players a massive amount of flexibility and the chance to choose their playstyle without missing anything.

Armors also play a huge part in God of War Ragnarok. There are different sets to unlock while progressing in the game, each with unique characteristics and stats. Choosing the right build often makes a difference in combat, as different numbers directly impact the overall performance of the equipment. Moreover, armor pieces can also be upgraded, just like weapons. There are other great gameplay addictions that the game presents later on, which we won’t discuss now for the sake of keeping this review spoiler-free, but you will surely be more than happy to welcome them as you progress through the story.

Atreus and other companions will support Kratos during the course of the adventure. The boy can count on his bow during combat, and the arrows can help stun enemies and solve specific environmental puzzles. Many battles can be approached by exploiting the verticality of the game areas or by interacting with particular items, such as large rocks or stone columns that can be thrown at nearby foes.

Speaking of enemies, the variety of bosses has seen a step forward in the saga with Ragnarok, with many different foes that will try to kill Atreus and Kratos in every possible way. Each obviously has their set of skills, timings, attacks, and a proper analysis of their moveset before charging them or being able to break their guard, especially at more demanding difficulty levels. Standard enemies, although greatly designed and characterized in the title, may look and feel just a little repetitive in the long run as the protagonists get to meet diverse groups in different areas, maybe charged up with elemental attacks. Nothing that really affects the gameplay in a negative way, though.

Each of the Nine Realms can be explored while progressing through the main story of God of War Ragnarok. Each area is masterfully designed, with its palette of colors, gradients, and unique elements that characterize the diverse spaces. The path that leads to completing the main task during quests is always dotted with secondary routes with additional enemies, mini-bosses, or chests that hide interesting treasures. Opening rarer crates frequently involves solving environmental puzzles, which adds more fun and a higher level of challenge to the game.

As I said earlier, many combat encounters can be tackled by benefitting from the improved verticality of the game, which also impacts exploration. You will frequently find yourself carefully analyzing the area to find the right path that leads to the objective or toward a hidden chest. Many zones are also worth exploring more than once, as I have discovered different hidden regions while tackling secondary missions or simply wandering through the map. It took me about 50 hours to complete the main story and other additional activities and quests at medium difficulty. I guess the game can easily last more than 70 hours for anyone aiming at 100% competition.

God of War Ragnarok also stands out on the technical and artistic front. Although it is clearly a cross-gen game, it can offer stunning visuals and majestic sceneries for each of the Nine Realms. Character and environmental models are skillfully crafted, with great care for even the smallest details. Ragnarok can be played by choosing between the different graphic options available on PlayStation 5 and PlayStation 4 Pro, which involve preferring a higher frame rate over resolution or vice versa. On the standard PS4, there is only one available option, so there is no chance to modify this setting. However, the game runs smoothly, without any noticeable frame drop even on the older console, a clear sign that the optimization process carried out by Santa Monica Studios has been flawless. 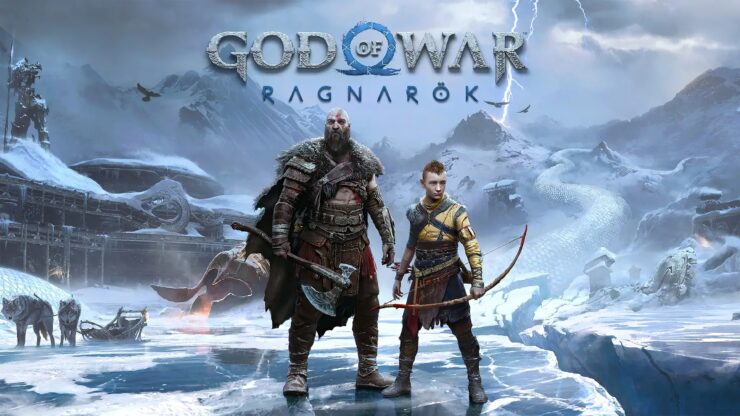 God of War Ragnarok is exactly what we hoped for, and even more. It offers a masterfully told story using a more mature approach, seasoned with a unique setting, a rich characterization of the characters, and challenges that can keep even hardcore gamers busy at the highest difficulties. In other words, it is a title that is simply just too good to be missed.