Gioteck has been a long staple for people like the younger me. People like the younger me being those visiting the local Game store (when they existed) and looking at console peripherals that are affordable enough to buy with a bit of built-up pocket money. The Gioteck TX70 sticks to this pattern, offering a wireless headset for the PS4 family of consoles, and the PC, costing just £49.99.

So, the box says it's for the PS4. As people are quite well aware, I have the PlayStation 5, and despite the countless games made just for the console, I haven't really turned it on that much. The Gioteck TX70 has given me another reason to turn the console on, with me also testing it on the PC for good measure. 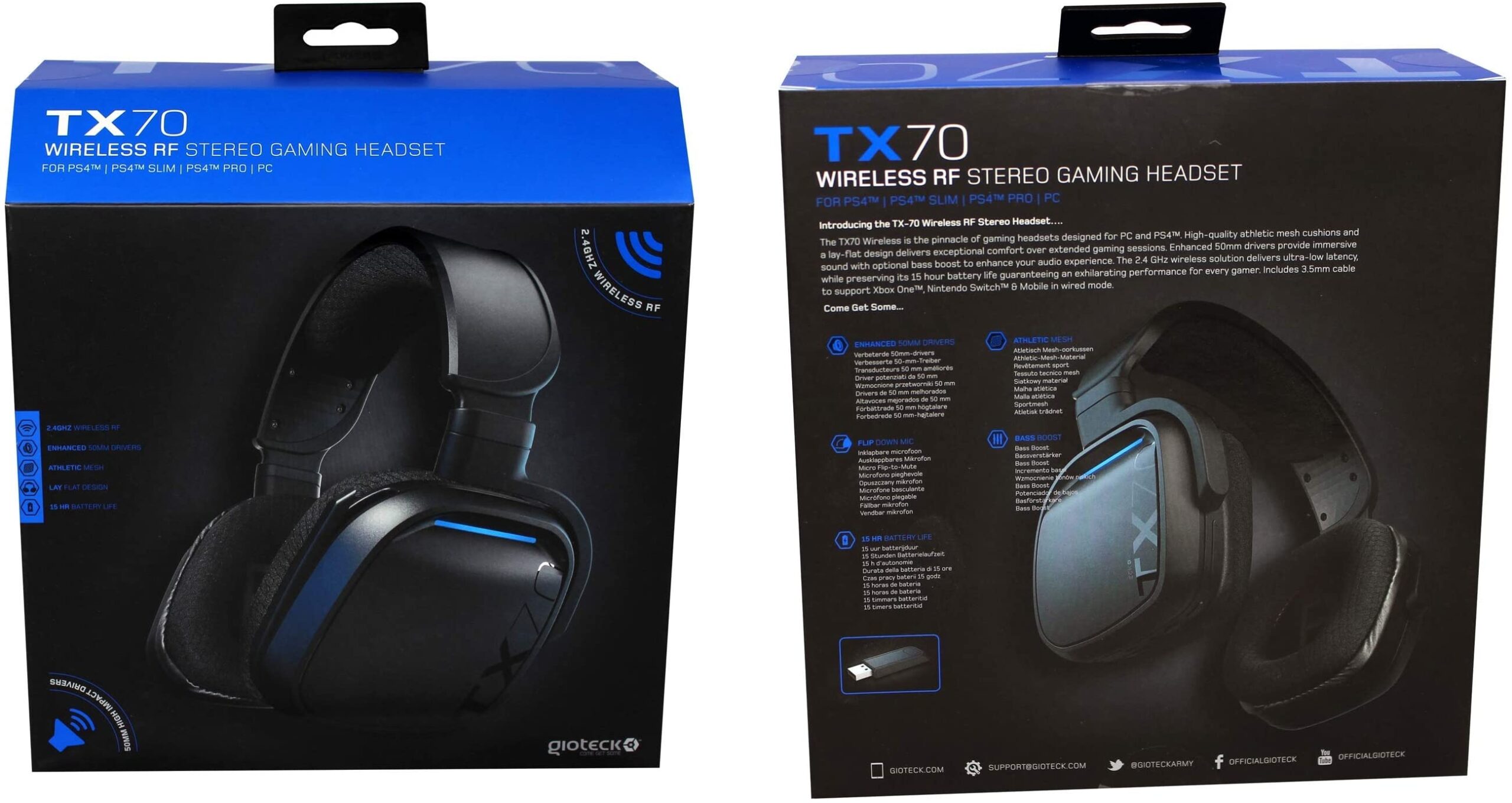 So what do you get for your £50? In the box comes the headset itself, with a supposed 15-hour lifespan. I found this to be slightly exaggerated with a decent volume output and with the microphone in use. Not hugely exaggerated, you may shave an hour off, but the reality is that you'll get a full days gaming session in without concern. Charging the headset is done simply enough; the headset coming with a short (66cm) cable for this purpose, it takes around two to three hours to charge, which is a little longer than I'd hope, but it's not terrible.

I've just mentioned that the USB charging cable that the headset comes with is only 66cm. You may think that the short length of the cable would preclude it from being used wired, but fortunately, this isn't the case. In the box also comes a 1m braided 3.5mm cable. This cable is said to allow you to use the headset on both the Xbox and Nintendo Switch. I can't attest to the use with the Xbox, I don't own one, but I can say that it works with the Switch.

As for the wireless capabilities, the headset comes with a 2.4GHz RF dongle. The connection has proven reasonable enough, with the connection only cutting out if I started putting a little distance and a floor between me and the PlayStation 5 as I went to make a cup of tea (Twinings English Breakfast or Yorkshire Gold). It's not as good as the Sennheiser GSP 670, my primary headset, but could you honestly expect it to compete with something that costs 550% more? "No" is the answer to that question. So far, I've got no complaints with this affordable wireless headset. 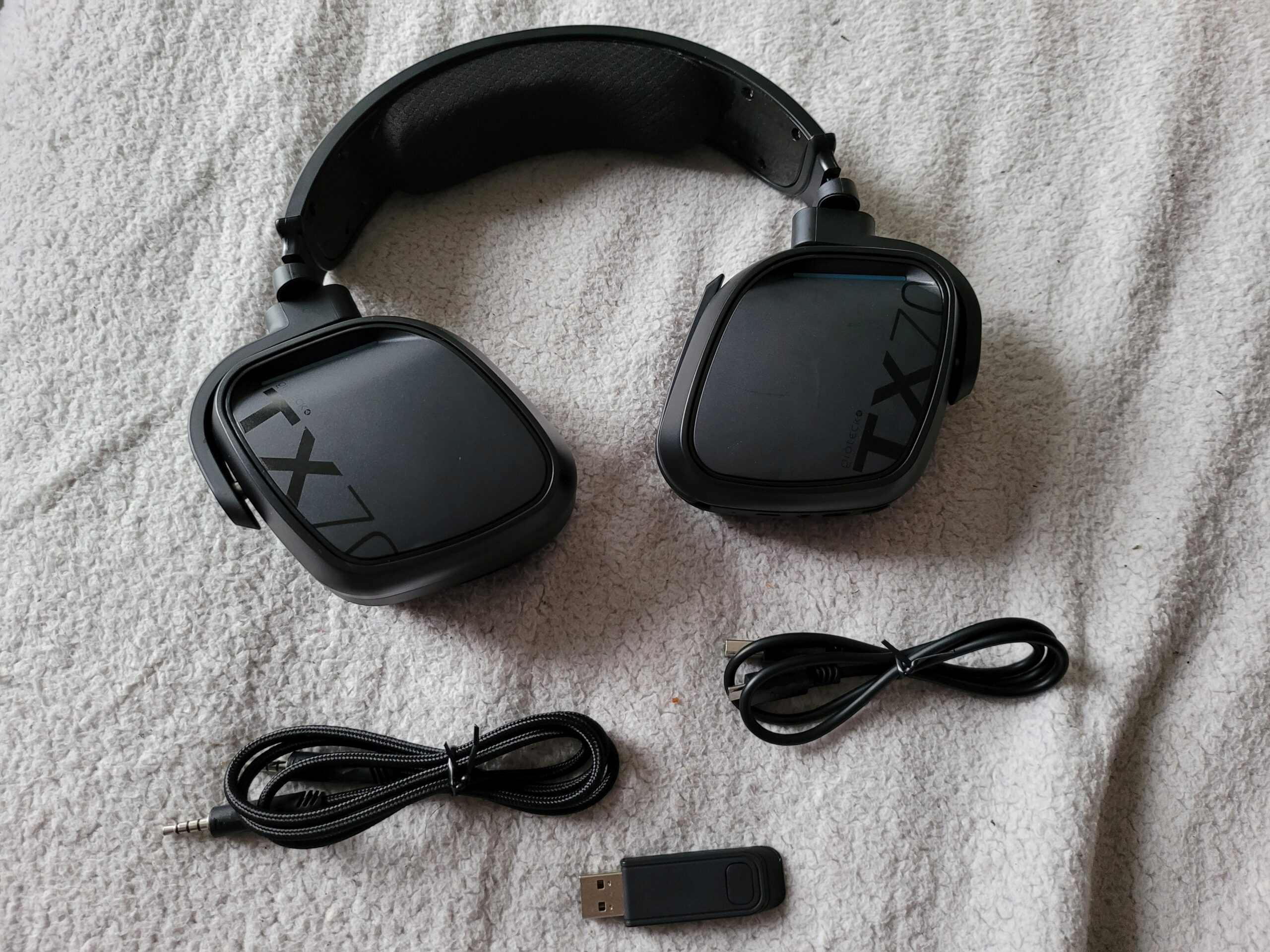 "So far" is the key part of that sentence. I do have a few quibbles with the Gioteck TX70. Some of those can be excused by the low price point of the headset; others not so much. Let's talk about the build, the materials. This is, as you can imagine, the part that can be excused. The headset is made out of plastic, plastic, and a bit more plastic. It feels solid enough; the headband is sturdy and puts up a surprising amount of resistance when extending or retracting it. I'm prone to falling asleep with headsets on if I'm laid down watching Netflix or something like that, and this doesn't feel like it would suffer as a result of that.

What does suffer, however, are my ears. Now, I've got reasonably large ears that fit in with my reasonably large head. While extending the headset over my head isn't an issue, the downright strange shape of the cups here - as well as the simple cushion padding - aren't ideal. Rather than going for an oval or circular shape, Gioteck has opted for a diamond of all things. It's not the biggest of diamonds either, so I've found a bit too much pressure on the top of my ear over long sessions.

I imagine it would have cost a little more, material-wise, but adding a bit of size would have been useful. The headset is neither large nor small, just sitting somewhere in the middle, just not doing enough to ensure constant comfort. This relatively modest nature isn't fully continued, with blue LED lights at the top of each cup. Still, whichever way I look at the headset, it's a relatively attractive and functional piece of kit. The cups will also completely turn, allowing you to rest them around your neck. It's just a shame it's too small for my ears and likely anybody else with large ones.

It's a shame because the audio quality isn't bad. The 50mm drivers offer a decent enough sound quality for the price you're paying, especially when you consider again that this is a wireless headset. Whatever you're playing or watching, it will offer enough to keep you immersed, though there's little to keep out background noise.

One thing I haven't mentioned so far is the eq button on the headset, offering a boost to the bass of whatever you're listening to. As for the microphone, which is quite inconspicuous - contrary to other aspects of the headset - the quality is again what you would expect for the price point. It will pick up background noise, but it will do for simple sessions. 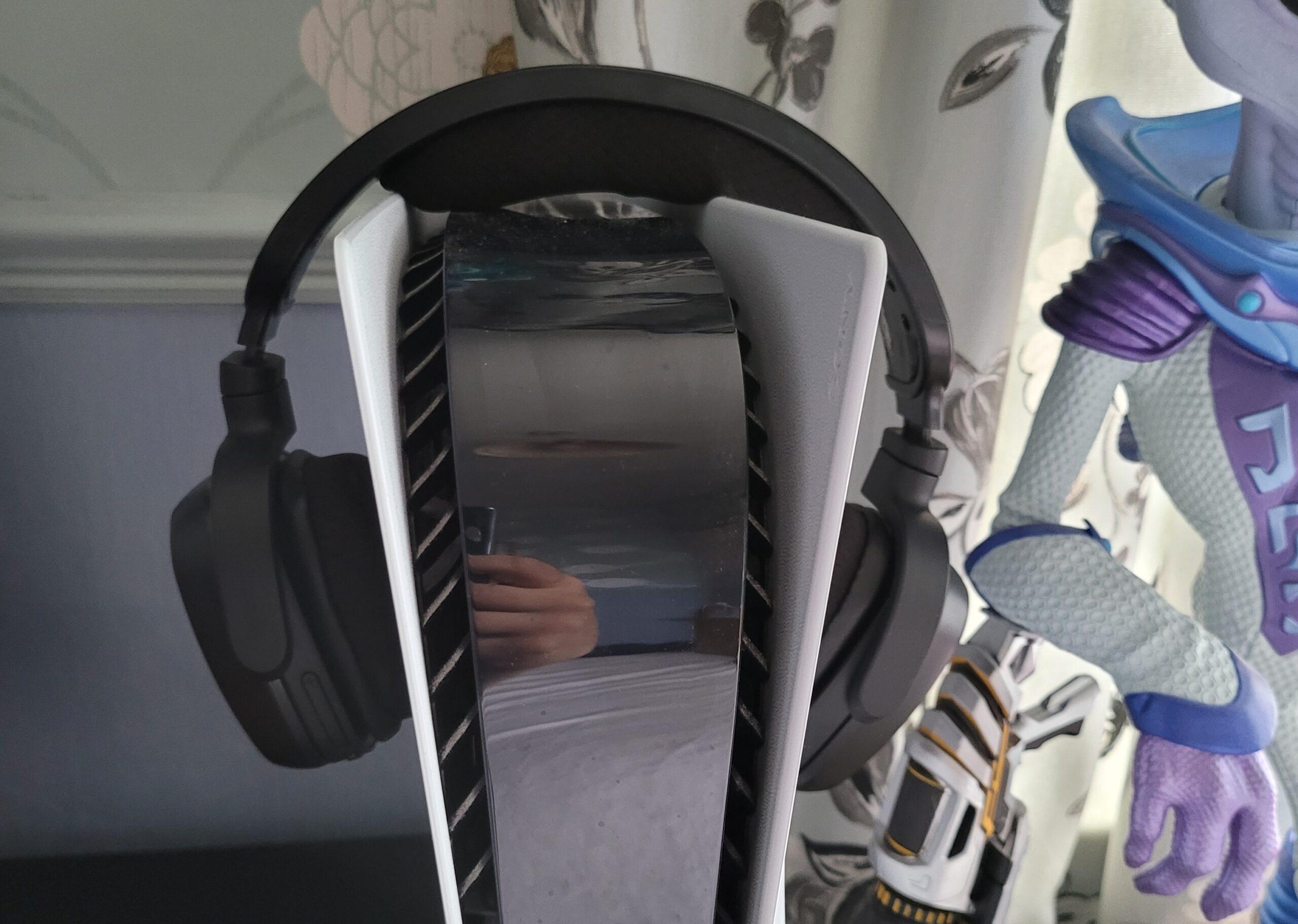 If I were to recommend the Gioteck TX70, that's what it would be for. This is a good headset for those who aren't looking to spend too much, and it would serve its purpose, doing the job that's required of it. It will never be the core headset for a heavy user or an audiophile, but it will more than suffice for anybody else. So yes, if you're looking for a cheap and cheerful wireless headset, this is certainly one worth looking at.

The Gioteck TX70 is a decent headset considering everything; that much can't be denied. For £50, the fact that it's wireless, it has a decent enough battery life and range, and it's sturdy enough to last are all strong features. There are issues, such as the shape of the cups, and the audio is about what you would expect from a cheap wireless headset (passable/decent enough). It's more than worth recommending for those on a budget.