If we were to judge our reality based on video game logic, we really shouldn't look forward to the future, as it will be a grim future where the world will be rendered uninhabitable, humans will become less and less human, and tyrants will rule with an iron grip with the help of advanced technology. Death will dog each and every step we take, but it won't necessarily be a bad thing, if we have the determination to persevere, regardless of the situation. This is, pretty much, Ghostrunner in a nutshell.

The world of Ghostrunner is no longer the one we live in. An unspecified cataclysm has wrought destruction upon it, and the few survivors manage to continue living only thanks to Dharma Tower, the last safe heaven where technology has prospered, and all fear has been left behind. This last Eden changes radically, however, with the rise to power of Mara the Keymaster, once a brilliant scientist, and now a tyrannical ruler who holds the entirety of the human population in an iron grip.

Not all inhabitants of Dharma Tower have resigned to this fate, however, and have tried to take down the Keymaster and restore freedom to humanity's last safe shelter. The uprising failed, though, and those who participated in it have been either killed or imprisoned. Among them is the Ghostrunner, a swift and powerful warrior armed with a molecular katana who has no recollection of the past. Guided by the Architect, the Ghostrunner will remember who he is and all he's capable of, setting out to take down the Keymaster for good and bring back some hope in this world on the brink of complete annihilation.

Storytelling is definitely not the main focus of Ghostrunner, but the game still succeeds in presenting a compelling, albeit not particularly inspired, cyberpunk story. The plot unravels as players move through missions via radio dialogues so that the game's pacing never slows down. It's a very interesting choice and one that works incredibly well in the context of the game, as Ghostrunner is indeed all about never slowing down and never stopping, not even in the face of death. Multiple deaths, to be precise.

Ghostrunner is a high-speed first-person action game where players are always supposed to be on the move, whether on the ground or in the air. The game's tempo and the pacing are extremely fast, so much that it feels like playing one of those arcade games that gave players no breathing room, and no respite: move, or you will die.

Ghostrunner feels extremely enjoyable to play. Movement is very, very smooth, and the parkour mechanics work incredibly well, allowing the Ghostrunner to run on walls, perform some tricky jumps, dash in the air and use a grappling hook to reach otherwise unreachable areas. There's a rhythmic nature to the whole game that is just captivating, so much that it actually makes you feel like the supersoldier you are controlling, also thanks to the amazing level design that constantly challenges your platforming skills. It's not just the impossible jumps, it's the speed of the action as well that evokes these feelings.

Like the high-speed movement and parkour, combat also contributes to making you feel like the real Ghostrunner. Our main character can slice enemies with a single swing of his Katana, can slow down time in the air to dodge attacks, reflect energy shots back at the enemy, and unleash four special skills that make him even more dangerous. Mastering these techniques is extremely important to deal with all kinds of enemies: alongside regular grunts, you will meet enemies armed with machine guns, melee weapons with different attack types, shielded enemies that require you to navigate the stage in search of the drones generating the shields and so on. These scenarios, in particular, are extremely well-designed, as they manage to combine the platforming and combat mechanics in a very coherent way. The excellent implementation of controller feedback which will also make sure you will feel every hit and every kill, making combat even more satisfying.

This feeling of almost complete omnipotence, however, is fleeting. From the very first mission, it becomes clear that Ghostrunner is not a game for everyone. On the contrary, it is just for the select few who have the perseverance to master its many challenges, and believe me, it is not easy at all.

Ghostrunner employs a one-hit kill mechanic that makes it exceedingly challenging. You miss a jump and fall, you die. You get hit by a bullet, you die. The game does feature a checkpoint system that prevents you from losing too much progress during missions, but the challenging design of both platforming and combat as well the high speed of the action make the whole game feel too much like a trial-and-error affair. It requires the memorization of platform and enemy placement rather than skill that can make the player react to the situation. It is not unusual, for example, to die more than a hundred times and spend one hour to complete a stage that would actually take 20 minutes. This is obviously a precise design choice, as the game keeps track of completion time and total deaths, but it is also something that may turn most players off: succeeding in Ghostrunner requires patience, practice, and dedication, and many will probably write the game off in the first few missions.

While platforming and enemy encounter design only gets more complicated each and every mission, constantly presenting you with new scenarios that will force you to rethink your approach, there are ways to make the game slightly easier. Ghostrunner features a character customization system that lets you equip different perks called Modules on a Calibration Panel grid. Each perk enhances a particular skill of the Ghostrunner, and it's represented by Tetriminoes-like shapes, forcing players to find a combination of Modules that can fit together on the limited space of the Calibration Panel. Some of these Modules are great for exploring the stage, as they better highlight enemies and collectibles, while others improve skills and abilities, like the Module that lets the Ghostrunner dash more than once, or those that reduce the cooldown timer of the special skills. Given the game's design, there isn't a single setup that will carry you very far: the customization system actually empowers different play styles, and its design and implementation definitely feel coherent with the game's entire design philosophy.

While the high challenge level of Ghostrunner makes it an inherently very divisive title, no one can deny that the game looks amazing. The presentation is definitely top-notch, and it can rival that of AAA titles with much bigger budgets: locations, especially those in cyberspace, look amazing, with tons of flashy special effects like particle effects and incredible use of lighting that greatly enhance the game's cyberpunk atmosphere. The game fully supports ray tracing and NVIDIA DLSS 2.0, so the game will look even better when played on RTX cards. Optimization is also excellent, as the game ran flawlessly at the highest setting at 1400p, 60 FPS on the test machine which features an i7-3770 CPU, 980 Ti GPU, and 16 GB RAM.

At the end of the day, Ghostrunner is a complicated game to recommend. It's a tight experience where nothing feels out of place, but it is also one that is definitely not for everyone, as it is incredibly challenging and requires a lot of dedication to learn all the ins and outs of the parkour and combat system and pull off some amazing stunts. Doing so indeed feels satisfying, but the effort required to actually manage the feat will no doubt put the majority of players off. As such, only those who are ready to invest some serious time will truly appreciate Ghostrunner's finest points. Everyone else would probably rather have the Keymaster's dominance of Dharma Tower continuing indefinitely: freedom may not be worth a thousand deaths. 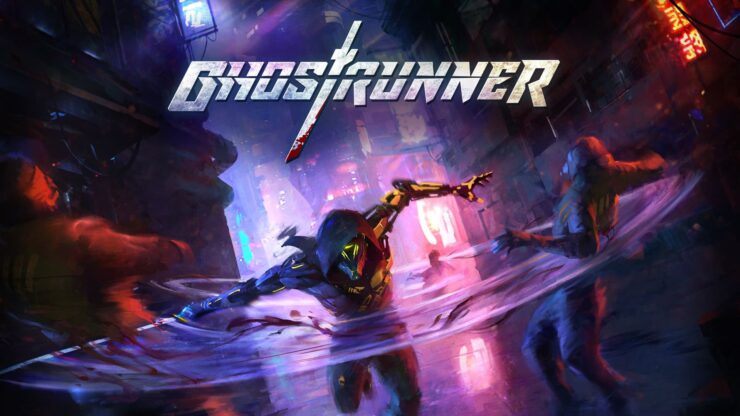 Ghostrunner is a very well-crafted first-person action game featuring a lightning-fast pace, a very smooth parkour system, and tight platforming in addition to weighty, satisfying combat. The high challenge level and the one-hit-kill system, however, can lead to some serious frustration, as it requires a level of effort that not all players may be willing to put in the game. As such, Ghostrunner is a game that only the most hardcore of action games players will fully appreciate.