There’s one thing that I have to give the creative team at Zoink! Credit for: they never settle for going for the same type of game twice. Fe and Stick it to the Man! couldn’t have been farther from each other in terms of how they use the gaming medium to tell a story. Ghost Giant is the latest from the creative team at Zoink! And explores how stepping into the ethereal shoes of a giant ghost can help a young cat named Louis in his daily life and helping those around him.

Playing as the Ghost Giant, your actions are limited to interacting with the world to help Louis reach his goal for that particular scene. Some scenes include trying to work his way into earning a bag of sunflower seeds to plant back on the family farm or going out into the world to discover music that’s hidden in the daily noise. To reach these goals, the young cat might need a little help from his oversized apparition. Control is limited to picking up and moving objects around to create a chain reaction of events (one of the collectibles comes in the form of small windmills that you can blow into, but that’s the only exception). Ghost Giant requires the use of a pair of PS Move controls and I couldn’t see trying to reach out and touch something in VR to be very enjoyable if you’re just on a standard dual shock controller.

The trial and error of experimenting with what can cause a chain reaction in Ghost Giant is its best use of VR. To help guide younger audiences, any environmental piece that isn’t just a bit of scenery will be trimmed with gold, whether it’s a doorknob or switch to press. It’s the other objects you need to pick up that blend a bit into the scenery so it can take some time just grabbing whatever you see and seeing how it sticks together.

Ghost Giant’s handcrafted aesthetic transfers incredibly well into a virtual environment. Rather than opting for cartoony or realistic graphics, Zoink! Went with a happy medium and crafted the world, well, literally. Trees and set pieces are built from cardboard scraps, papercraft fills the world at large with accouterments, and the characters themselves are wooden dolls brought to life within the theatre setting. There are only a small number of environments that Ghost Giant and Louis will work together in, but players can appreciate the world with its rich attention to detail. Ghost Giant very much so nailed that aesthetic for what I would like to see a Tearaway VR achieve one day.

Running through every scene of Ghost Giant is the common theme of depression and the various ways that it can manifest itself within someone’s life. Saved for a reveal later one, one such character is confined to spending their days in bed in the darkness as they can no longer enjoy the work they once loved. Another lashes out and destroys their one creative outlet when they feel like their friend has betrayed them. I myself have battled with the inner demons of depression for many years and know these feelings all too well. While I might not have had a giant ghost friend to help me weather the storms of bad days, just knowing there’s a network of support of friends and colleagues to help myself keep going is sometimes the best medicine someone can prescribe. To any readers that know what this is like, it doesn’t require a game like Ghost Giant to let you know that you aren’t alone.

When Ghost Giant isn’t tugging at the player’s heartstrings, the moments are quite upbeat and whimsical to help swing the balance away from the melancholy. Louis means well and tries so hard that you can’t help but look upon him in endearment. Even as things might not go that well, being his silent ghost friend can help weather anything that may come his way. Ghost Giant isn’t a tale of saving the world or even his town and it turned out to be so refreshing to play such a small-scale adventure built within VR.

Ghost Giant is built upon staying stationary as you interact in Louis’ world. As such, the whole experience can be played either standing up or sitting down depending on personal preference. What little camera movement there is resides solely in turning from side to side in wider pie slices at the touch of a button on the PS Move controller. As such, the whole experience to Ghost Giant offered no discomfort and I was able to play through almost the entire story in a single setting. Expect to spend about four-to-five hours guiding Louis depending on your puzzle savviness and perhaps a little bit longer replaying chapters where you might have missed the collectibles.

Ghost Giant’s fatal flaw is in the motion controls. Even playing in a well-lit room and adjusting the PlayStation camera around from both underneath and above my television, I ran into multiple, constant issues of tracking the two PS move controllers. Often times, it’s like my hands were hitting an invisible fence and I’d drop what I was holding or my hands would just get stuck temporarily. To fix this, I’d have to pull my arms back and wiggle them to help reset the tracking and it was a constant annoyance but not enough to force myself to stop playing. However, it was the worst when it comes to toying with one of the secret collectibles, picking up a basketball hidden throughout select stages and trying to sink a basket from across the playing field.

Intended for PSVR owners of all ages, Ghost Giant is charming, accessible, and cute as a button. Some deeper themes to mental health that pervade throughout the narrative may be a little too depressing for younger audiences, but the journey of Louis and his giant ghost friend have made it one of the most charming VR experiences I’ve played this year. If you can persevere through some control issues, there’s a story worth seeing for yourself in VR in Ghost Giant. 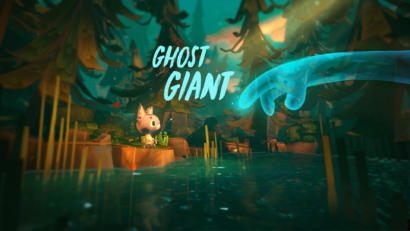 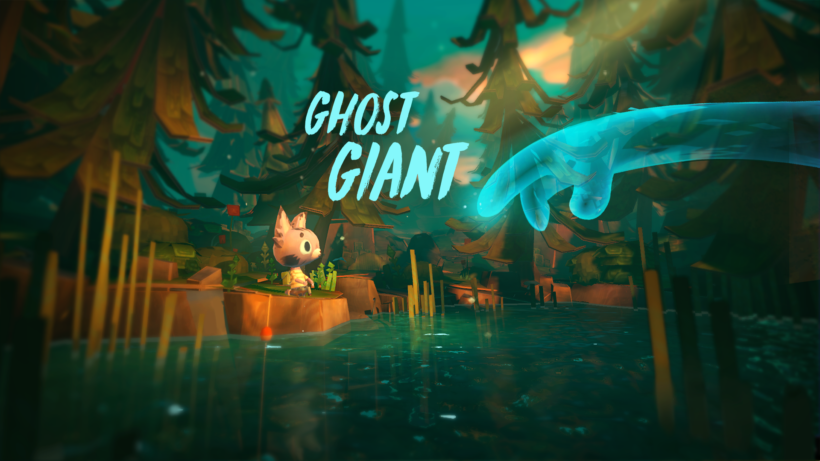 Ghost Giant is easily one of the most accessible PSVR puzzle games available in 2019, despite the control issues I encountered during my playthrough. There is a deep story about mental health here, but its impact is certainly softened by the cartoony adventures of Louis and his oversized ghost friend.