Call of Duty: Modern Warfare Will Support Mouse and Keyboard on PlayStation 4, Too

The GameSir VX2 is designed with gamers and comfort in mind - the two most important factors for a product like this. The keys are red mechanical switches, which feel very nice, though perhaps not quite as smooth as a more expensive keyboard. The form factor is shockingly good - the aluminum body protrudes at the bottom, giving your wrist a natural place to rest, and while in use, it feels perfectly comfortable. All of the keys you immediately need to play games on console or PC are at your disposal, and of course, if you're on PC or a compatible console, you can always remap your keys at your leisure.

One of the smaller, but nicest features the keypad has, in my opinion, is the small thumbstick in the bottom right. This is just a tiny stretch away from the space bar, so easily accessible with your thumb while gaming, and is a perfect place to bind shortcuts. The thumbstick has the D-pad mapped to it in console games, and the arrow keys on PC, allowing you plenty of space to map extra functions if you need. It's a small feature, but one that makes a big difference in terms of making this keypad work well in a variety of games. 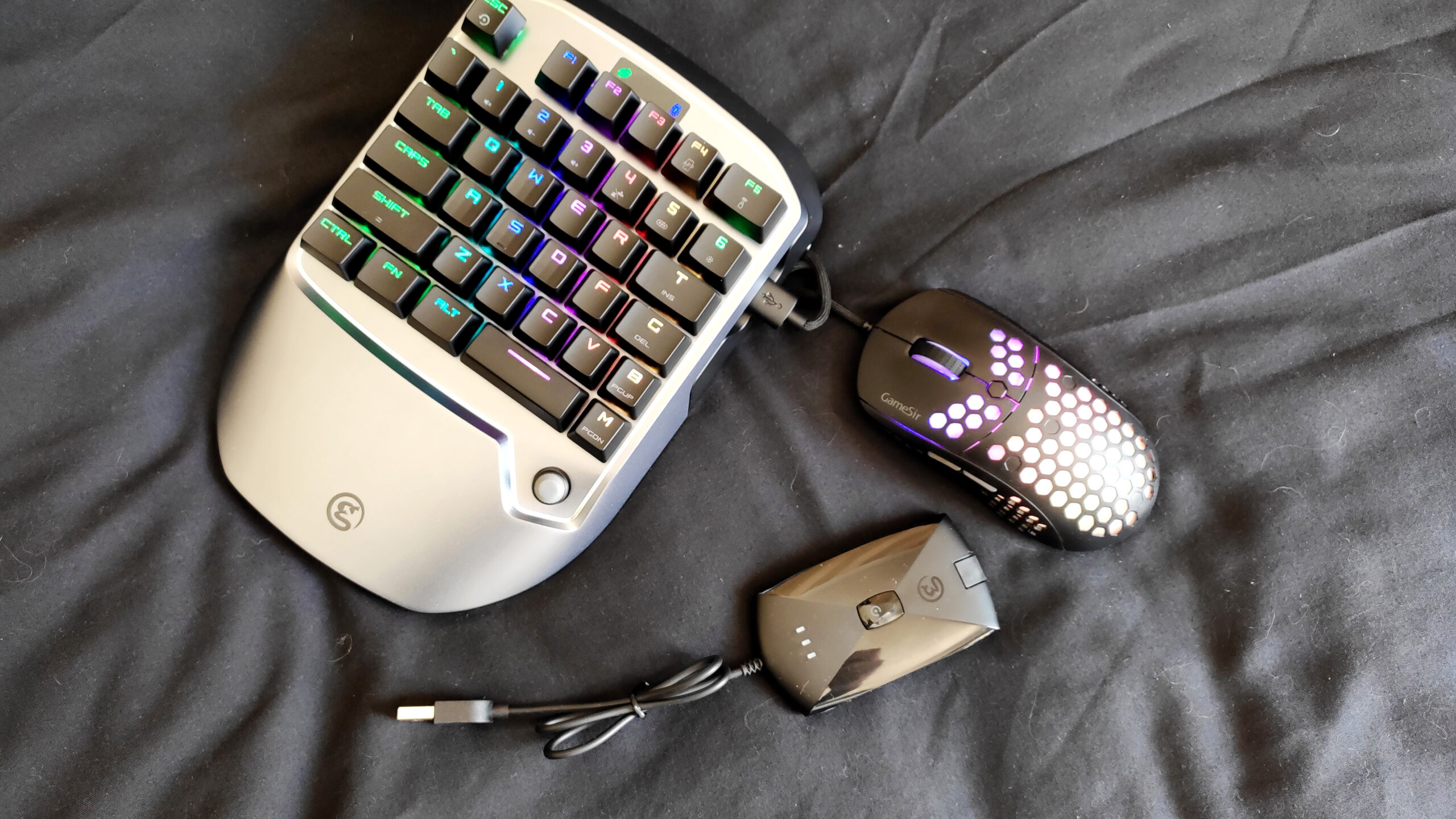 Now, the keypad is, without a doubt, the key item in this combo. Yes, there's an RGB gaming mouse included, but this is not the highlight. The mouse is perfectly fine. In terms of design, it is very comfortable and has a hexagonal perforated pattern covering the mouse, where the light both shines through and gives your hand enough airflow to prevent you from sweating through the palms. It comes with a DPI button below the mouse scroll wheel, and two extra mouse buttons on the side, as is standard with mice now. Possibly the nicest feature the mouse has is its long, braided cable which is incredibly lightweight, allowing you to drag your mouse around without any resistance as if it were a lightweight wireless mouse.

This mouse is nothing really to brag about. It feels distinctly cheaper than the keypad, and although it's aesthetically pleasing, you can tell the mouse is more cost-effective than the keypad itself. Luckily, if desired, you can swap in any mouse you want, as it simply connects to the keypad through a standard USB port in the side of the device. This is fully compatible with other mice I tested, including wireless mice connected through a USB dongle, so you can use something that is more to your preference.

The final piece in the box is the USB dongle which is used to connect the device to a PC or console. It is connected to a short, flimsy cable, and then a Micro USB cable which is designed to connect a controller to - we'll get to that later. It has three LED lights which glow when pairing or connected - and it's fine. You can tuck it behind your console or PC pretty easily, and while it's not the best designed and feels pretty cheap, it's also easily forgotten about.

The functionality is both where this keypad shines and shows its faults. First is the most attractive selling point: console compatibility. You can get a keyboard and mouse for PC anywhere, but a keyboard and mouse for a console is a different story. The good news is that, yes, you can genuinely use the VX2 to play absolutely any console game, as long as it's on one of the newer, current consoles.

On either PS4 or Xbox One, you must connect an official controller to the micro USB cable connected to your console which the keypad pairs with. Once that is done though, the pairing is almost instantaneous, and you'll soon be using a keyboard and mouse on console. It really is that simple - shockingly so, in fact. I couldn't believe it worked so instantly, with so little time spent in setting or keymapping. The keyboard comes with a default console layout which is shown in the manual, and it's a good thing that it is a very good mapping layout because you will likely be unable to remap the unused keys in most console games.

I did not test the device with an Xbox One, but on PS4 all I had to do after connecting was head into the settings and change the default mouse input speed from "Slow" to "Fast," and everything from that point worked. Games that are not designed for mouse input on console, such as Apex Legends, are obviously slightly hamstrung as they are designed for the limited range of input that analog sticks provide. You can bump the sensitivity in the settings of the game, in addition to changing your mouse's DPI settings, and eventually, you should be able to find a sensitivity you're pleased with - though this will not feel exactly the same as playing that game on PC. 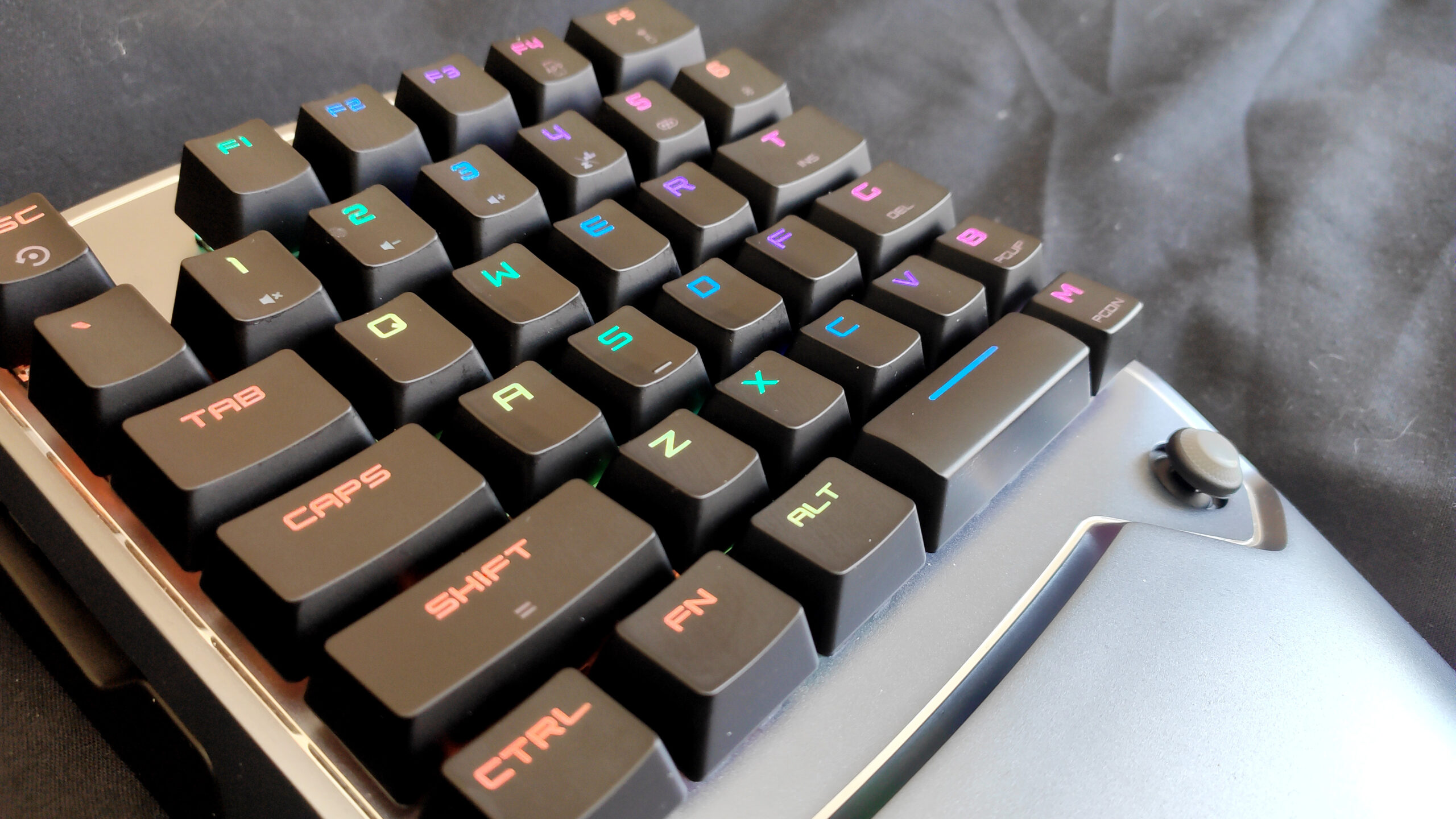 This obviously isn't true for games that accept true mouse input though, such as Fortnite on PS4. In Fortnite, the game immediately recognized that I had a mouse connected and it worked pretty much exactly like the game would on PC. No issues, no problems, this worked great. Genuinely if you desire to play games like Fortnite with a mouse and keyboard set up, but don't wish to have a PC in the room, the GameSir VX2 is perfectly ideal.

And another great use case is couch gaming in general. Unless you buy a specific keyboard designed for use on your lap, then it's awkward to find a decent setup. With just a tray or something on your lap though, the GameSir VX2 keypad works as a wonderful way to play PC games on your TV wirelessly with full comfort and functionality, or perhaps you have a gaming capable laptop, and just want a comfortable, compact keyboard and mouse combo to sit at your desk without taking up space? Again, this is a great option.

My final point for console functionality will be the Nintendo Switch. The GameSir VX2 actually connects to the Nintendo Switch dock, or the USB-C port on the console itself, and works instantly. Again, as soon as the keypad is paired, the console believes it has a Pro Controller connected. Now, this is hardly a good set up for most Nintendo Switch games (it didn't exactly aid my gameplay in Animal Crossing: New Horizons) but it was shockingly responsive and fun to use in Splatoon 2. Splatoon 2 did highlight a small problem - since the VX2 is read as a Pro Controller, the game assumes you have full use of gyro controls, and will force you to use them in the tutorial - but once your out and can turn off gyros, the mouse becomes a great way to aim and navigate. Though, it did make me wonder if combining both gyro functionality and analog movement to the mouse with make for a more accurate-to-PC aiming feel on Nintendo Switch. Something worth pondering, but it certainly didn't hinder my experience.

The mouse always worked as intended throughout all of my play, but again, it has to be said that this is a lower quality mouse. This will be perfectly fine for those new to PC gaming, or as a first gaming mouse, but more experienced players will likely already have a mouse they prefer, or won't mind investing in a new one.

As a side note, while playing PUBG on PC with the GameSir VX2, I did experience some odd behavior. When moving through the game, it would assume I was holding down a key for longer than I was at the time. Holding down W, I would tap D to move to the side slightly, but the keypad would assume it was held down, and I would start strafing until I tapped it again. To be clear, this issue did not arise in any other games I tested, and I'm willing to put it down to an odd setting in PUBG, wireless interference in my office filled with devices, or something else. Still, something important to note. 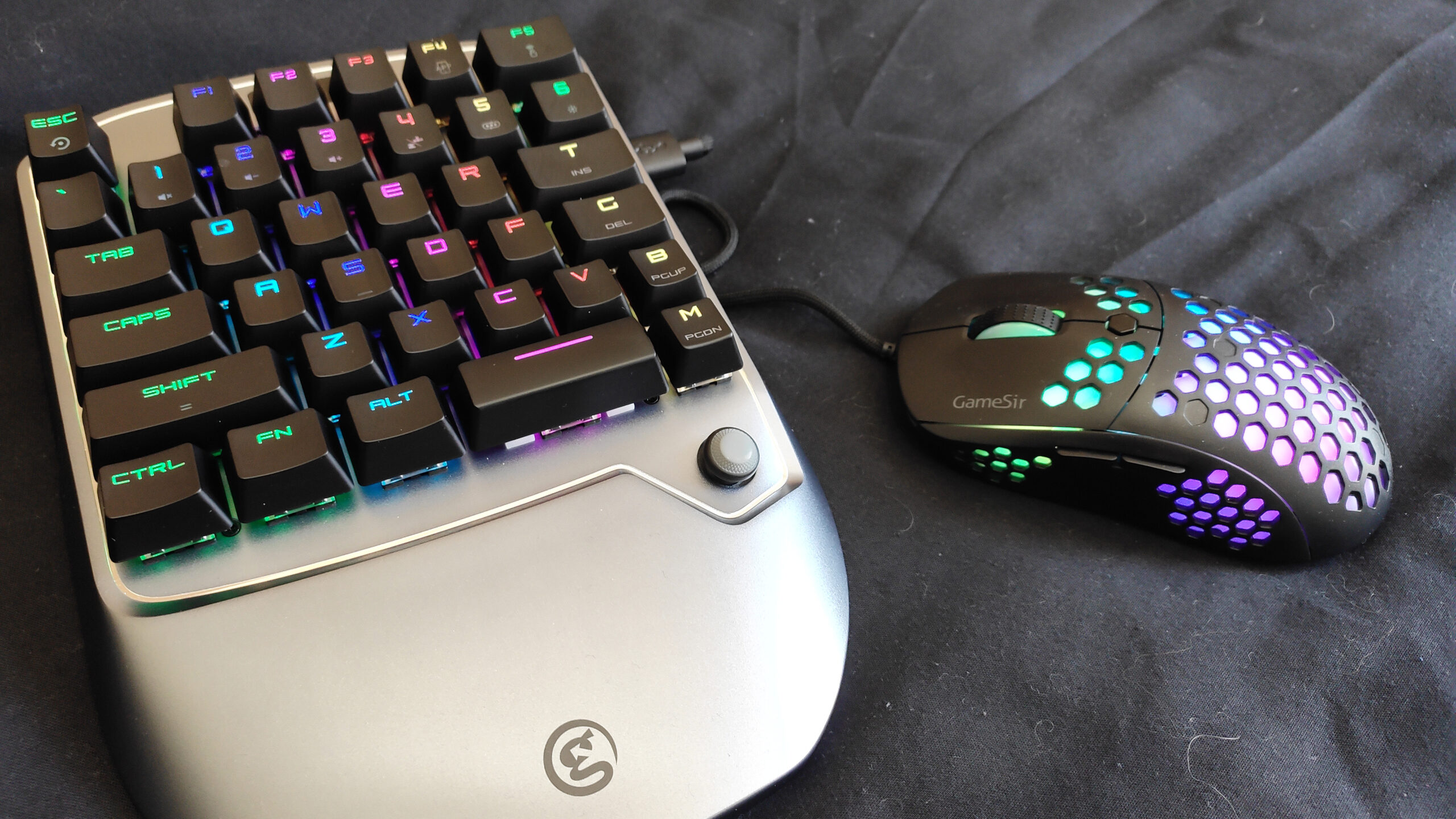 Who is this for, and is it worth it?

When I first used the GameSir VX2, I wasn't sure who it was for. Before I had even used it, I realized that consoles could not perfectly interpret mouse movement which was being read as analog stick movement. I thought this would totally ruin the point of the device, rendering it pointless. I was totally wrong. With enough tweaks to sensitivity and DPI settings, you can have console shooters play and feel very close to a PC experience.

But not only that, I realized that with games like Fortnite, console owners have the option to try a control scheme they may prefer, but don't have a form factor comfortable enough to try it out on. Well, this is it, allowing you to use both a mouse and keyboard on your PS4, wirelessly, while still leaving a USB port open for your headset or whatever.

And in addition to that, it's for those people who don't have PC sat at a dedicated desk at all times. Most PC gamers do have a desk where they play and work with their high-performance equipment, but some are playing on a laptop, which is very reasonable considering how capable laptops have become at gaming in recent years. For those people, having a small form factor keypad and mouse which they can easily tuck away in a drawer, and bring out when they decide to sit down for some gaming, is wonderful.

I had my doubts about the GameSir VX2, and I was hesitant about who would use this and why. But after playing with it for several days across different systems and games, I can finally see its use cases. Even if you do not fit into the use cases I've mentioned, this could be used as an accessibility device for anyone who finds modern controllers uncomfortable or unwieldy. There is a lot of potential here, and while the VX2 clearly isn't for everyone, I definitely see it finding a firm fanbase.

The GameSir VX2 Aimswitch Keypad is a wireless mouse and keyboard combo that can be used across all modern consoles and PC, and it does exactly what it promises to. If you find that proposition attractive, or just want a sleek, comfortable, and compact keypad to play PC games on, then this is perfect. While it has a handful of faults and small things that could be tweaked in a potential VX3 revision, this is an excellent product and a surprisingly legitimate way to play console games.