What’s more dangerous than a man with nothing to lose? That’s right, nothing. This is the mindset that I had while playing through FORECLOSED. It’s the story of a man in a cyberpunk-like world whose entire life was ripped away from him. However, as he goes along in his quest for freedom, he finds himself wrapped in a conspiracy that’s going to change everything he had known up until this point.

The game itself left me with a variety of impressions. Some good, some bad. They piled on until I more or less stumbled upon the ending of the game. Do I think that the game holds its candle? I find it a bit hard to say. But, perhaps you’ll get a good idea about my grievances as we go along. 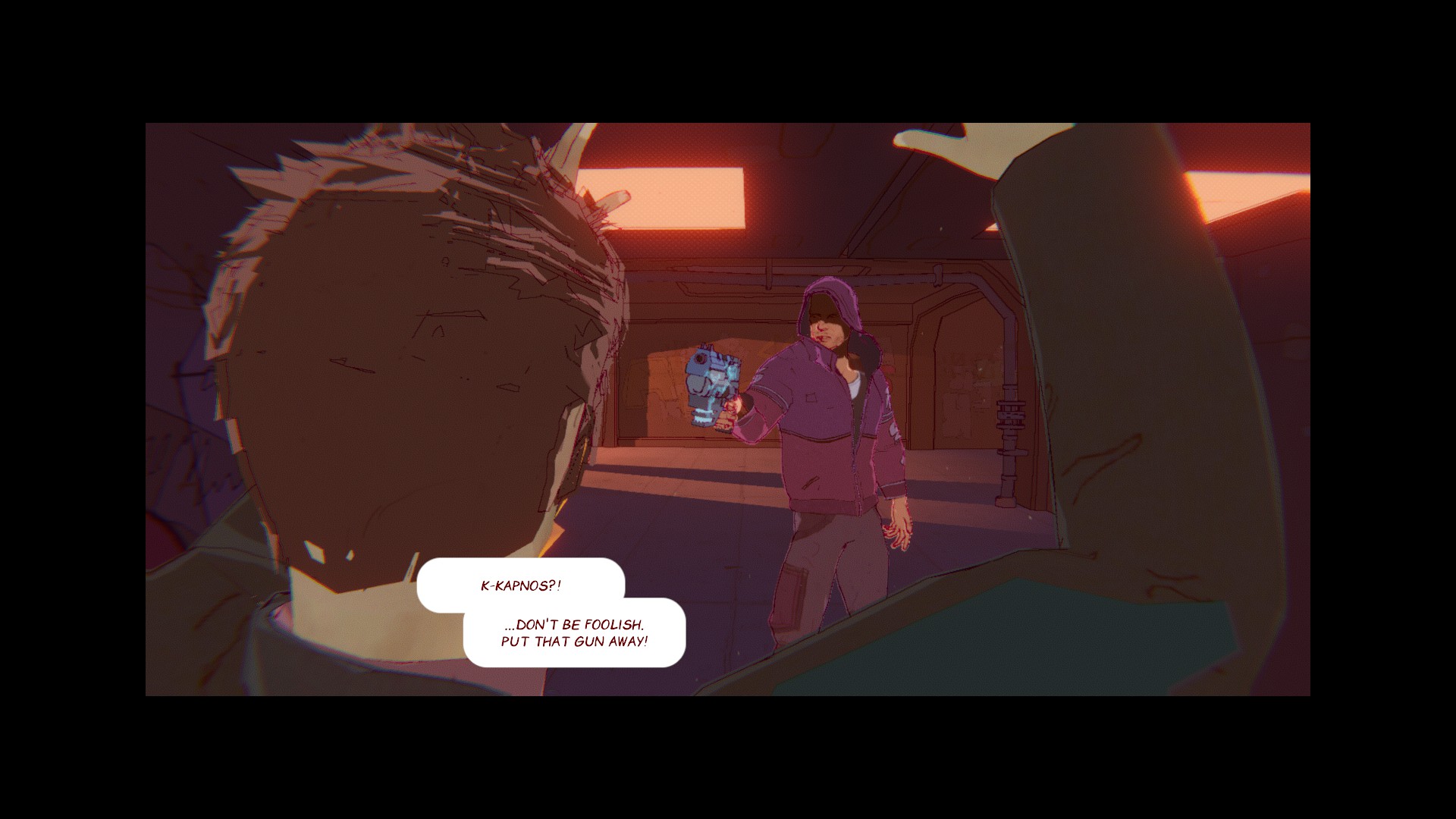 Let’s begin with elaborating more into the story. It's about a man called Evan Kapnos who works under Securtech in the Operational Department. The game literally begins with him being told that he has an identity debt which essentially bans him from being in his home. No joke, he can’t even take anything from the fridge in his home because of his neural implants forbidding him from doing so.

Why did he get such a debt? Because the company he works for went into bankruptcy overnight, leaving him in the dumps with an irredeemable debt. The court tells Evan that he has to show up before 4 PM to negotiate some deal. However, on the way to the court, he is suddenly chased by unknown individuals trying to gun him down.

It is later revealed that Evan and Securtech were deliberately set up by a mysterious man pulling strings so that both the company and Evan’s implants get sold off at an incoming auction. So, Evan is now in a race against time to take down whoever stole his life from him. 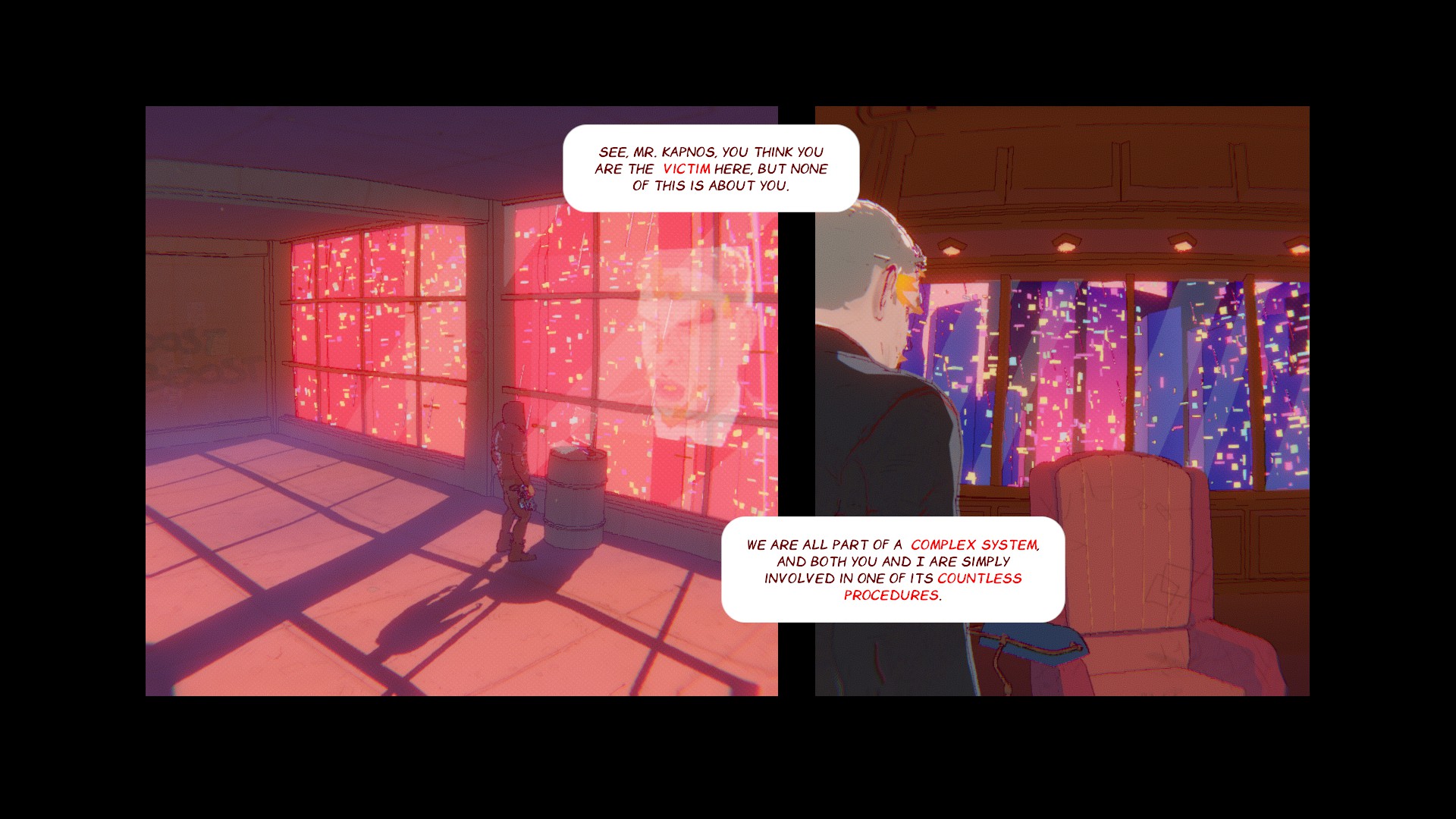 The premise is basically one of those you may find in your nearest action flick that you watch when you’re bored. The villain will appear, make themselves known, and Evan will take them down. So, yeah, the game isn’t breaking any ground in its storytelling. What really takes the cake here is the game’s visual style.

FORECLOSED takes a comic book-like aesthetic choice in which characters and environments have a cel-shaded look to them. The whole thing feels like I’m reading a comic book. Not just in things like rectangles in the narration but also onomatopoeia showing up whenever a character does something like shooting a gun.

The game uses this visual style to make some epic action sequences in which the player can follow the action through full-screen or comic panel perspectives. FORECLOSED knows how to seamlessly transition between the perspectives to make the player feel like they are part of the action that happens in the comic book.

When you’re not interacting with cutscenes that use dynamic camera angles, you’re shooting down bad guys in an over-the-shoulder third-person shooter style. Enemies essentially come in waves which you have to take down by shooting at them with your futuristic gun. Yep, that gun is the only weapon you’re going to be able to use, and you better love it because it can do some pretty nifty things.

This is where the game’s upgrade system comes into play. As you kill enemies and find hidden goodies, you’ll gain EXP, which will unlock upgrades that your gun can use. The upgrades are interesting in and of themselves, ranging from being able to shoot through enemy armor, a machine-gun mode, and even using telekinesis to redirect your shots, so they always hit the baddies.

And yes, I did say Telekinesis. This is one of the few abilities Evan will have access to (and can also upgrade). He can make an energy shield that will make him resist enemy damage, the capability to toss the enemies into the air so he can get a clear shot while they’re helplessly floating around, or my personal favorite; being able to push the enemy to the floor so you can focus on other enemies. 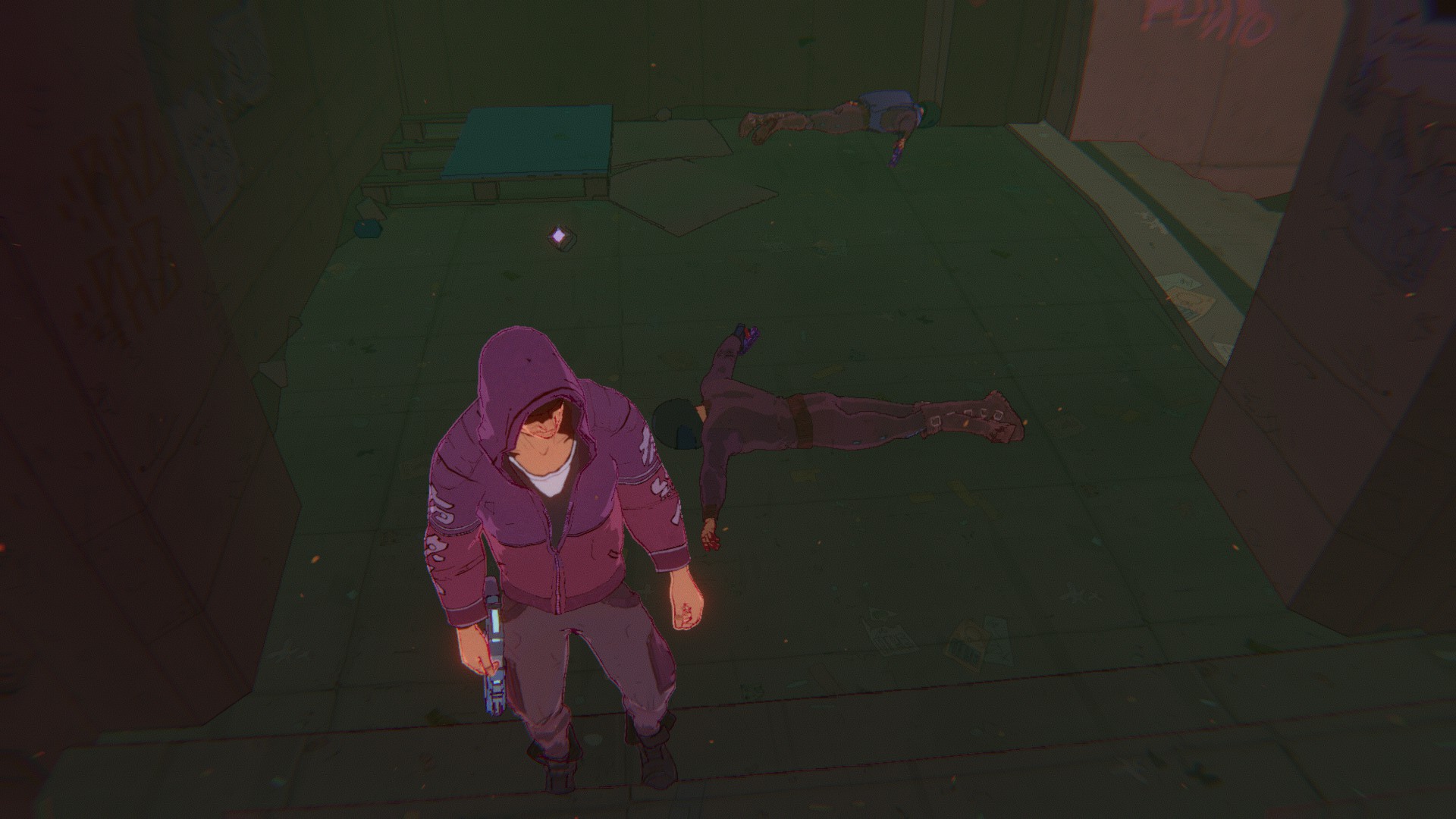 Now, these are some cool abilities, but I wish they were implemented in a game with better enemy AI. You see, the enemies tend to follow their target with pinpoint accuracy. While that means that you can’t just run in guns blazing because you’ll become the world’s biggest swiss cheese in less than a nanosecond, it also means that they will shoot at you regardless of whatever the heck’s in the way.

Yep, that means the enemies in FORECLOSED will usually stand around doing nothing but shooting the nearest wall, doing absolutely nothing to try and cover themselves while you pump them full of lead. What made me laugh was that, on some occasions, I was able to clip my gun into the corner of a wall and shoot the enemies from a very obviously impossible position because I’m sure the gun’s tip was sticking out of it.

Telekinesis by itself is pretty broken with the armor-piercing upgrade, especially because the gun has infinite ammo as the gun and the telekinetic abilities are both connected to your cerebral implants. Like any other piece of technology, the implants can overheat if you spam too many of the abilities or use your gun modes recklessly.

At least, that’s what I would love to say if it weren’t for the fact that one of the gun’s upgrades is a mode that essentially reduces the heat it generates. So, you know, I pretty much used that alongside the telekinetic bullets and armor-piercing upgrades and used those alongside the shield to kill everything around me easily.

However, that doesn’t mean that I didn’t die throughout the playthrough, mostly because FORECLOSED’s idea of “difficulty” is spawning enemies that will catch you off-guard the first time around, so you’ll end up getting shot down hard because you didn’t expect three different guards to pop up around the corner you just ran into. 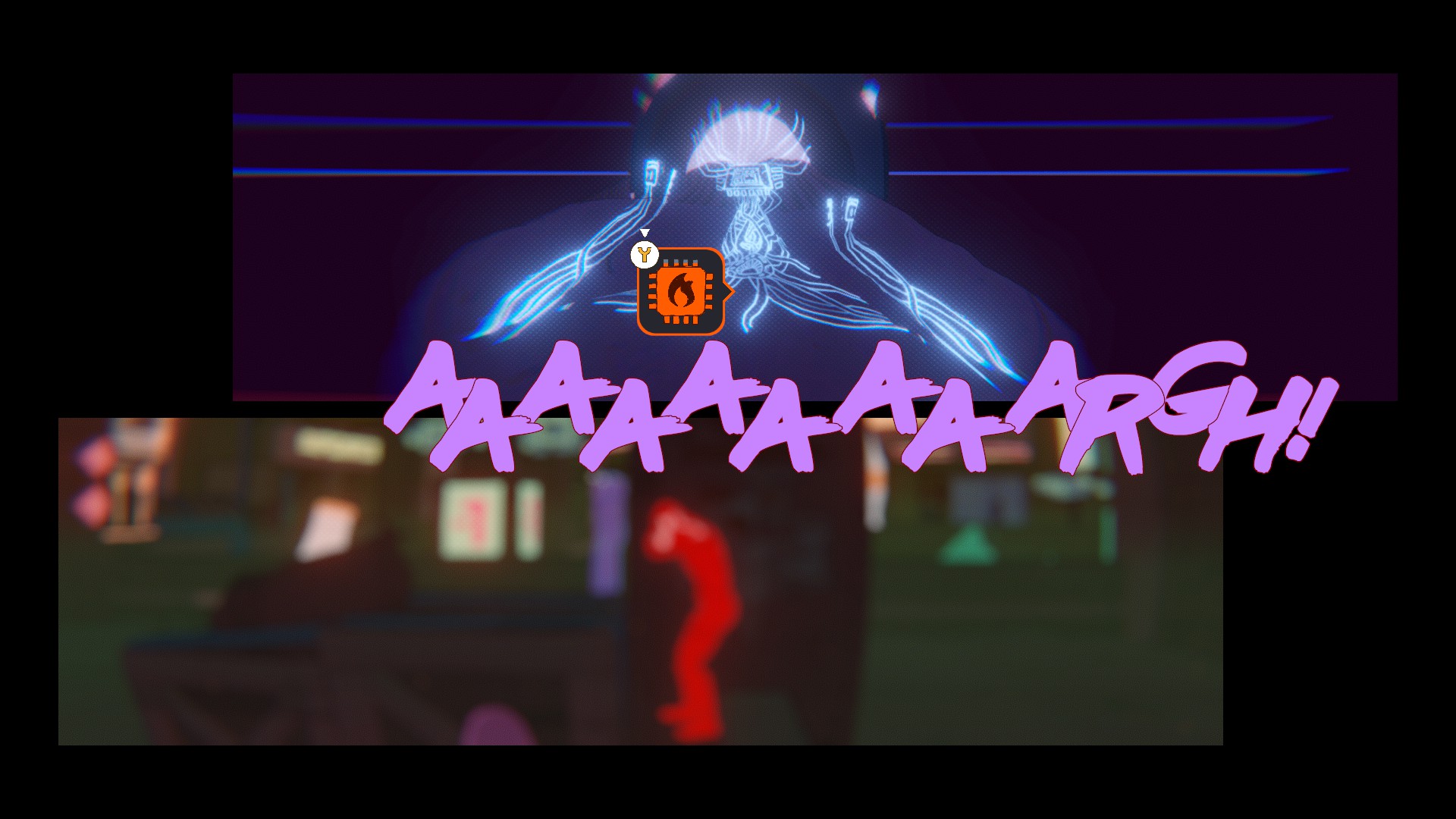 FORECLOSED also tries to have some stealth sections which allow you to abuse the cybernetic implants of your enemies to force them to overheat and kill them stealthily. However, most of these stealth sections end up becoming a tedious way to reduce the enemy numbers before you inevitably get thrown into a gunfight anyway. No joke, I even finished a stealth sequence without being spotted, and my only reward was a gunfight that was going to trigger anyway.

There is one section where stealth is mandatory, and it’s actually one of the most annoying ones in the game. There’s a part where you have to avoid drones and activate certain switches to progress. However, the peripheral vision of these drones is so utterly busted that they manage to find you even if you’re supposedly hidden. What’s worse is that the game expects you to backtrack several times during these sections to find the switches so you can progress.

I praised the game’s visual choices, but these choices only benefit it when you’re moving forward. When you backtrack, the game becomes an awkward guessing game in which the camera angle is pointing you to go one way, but you have to go back and blindly guess if there’s some enemy in the way back. When you consider that being spotted by a drone is considered an instant kill during this section… Well… I’m pretty sure you can draw your own conclusions about that. 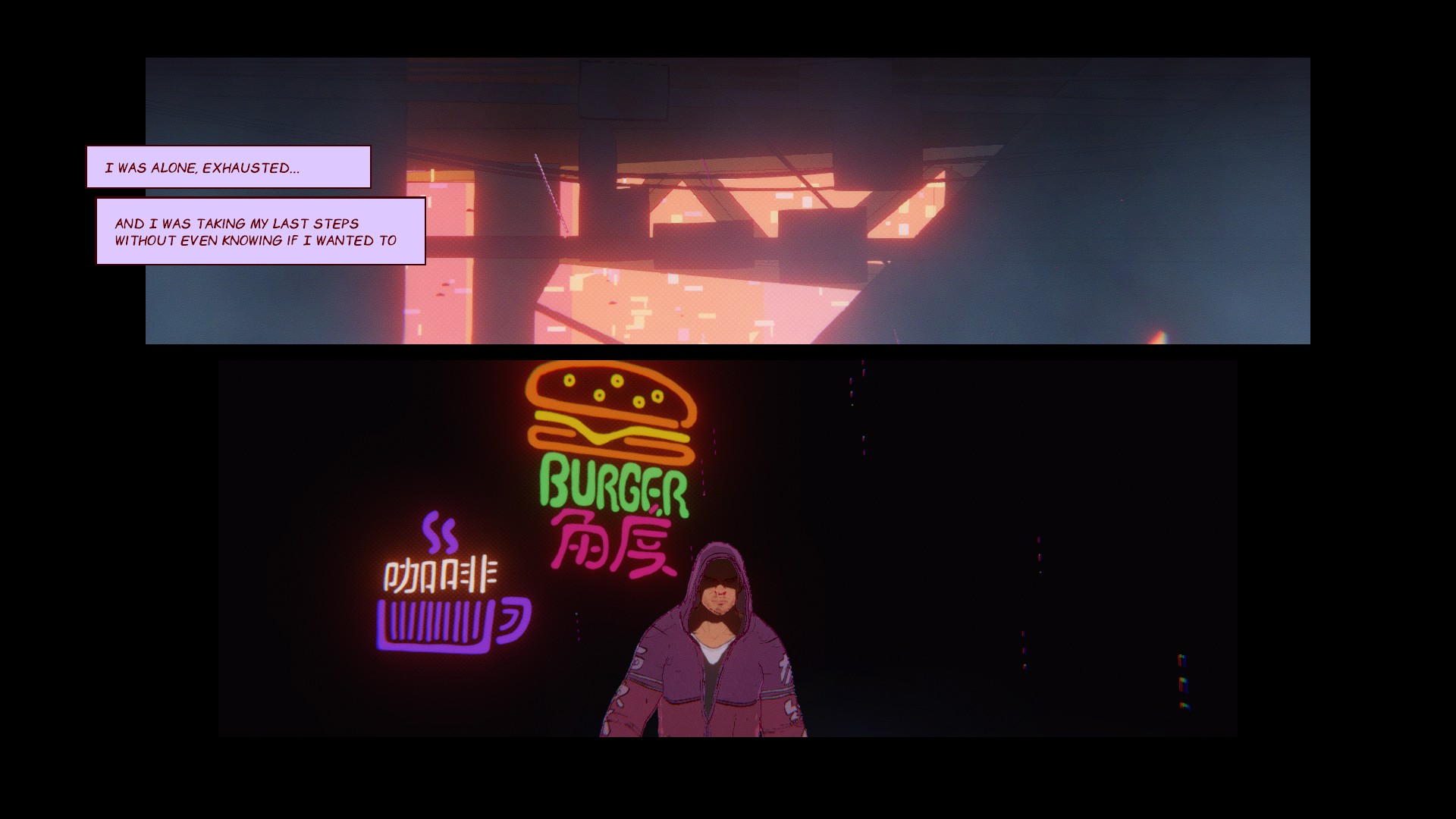 It's why I feel so conflicted about my FORECLOSED review. The developers did a lot of things right. The visual style is nice, the cyberpunk aesthetic is one I fell in love with and wished could be explored more in-depth, and the plot is by the numbers but still engaging.

Unfortunately, all of these good things are held back by a lackluster upgrade system, a laughably incompetent enemy AI, and sometimes downright insulting level design that feels more like it’s built around trial and error rather than tactical usage of resources and abilities. The fact that the game is pretty short, clocking in at around three hours, doesn’t make me feel too comfortable to recommend it to people.

I’d say that you should approach this game with caution. There are some good experiences to be had with this game. I mean, trying out ability and gun-perk combinations is actually pretty fun and something I will try out in future playthroughs while trying to get that hidden ending you get for picking up all the hidden signals in a single run. But there will be times where you’ll wonder if maybe it was better not to dodge that bullet in the intro sequence.

Foreclosed's visual style is nice, the cyberpunk aesthetic is one I fell in love with and wished could be explored more in-depth, and the plot is by the numbers but still engaging. Unfortunately, all of these good things are held back by a lackluster upgrade system, a laughably incompetent enemy AI, and sometimes downright insulting level design that feels more like it’s built around trial and error rather than tactical usage of resources and abilities. The game should be approached with caution as it can provide a fun experience but also a mildly infuriating one.