Six years, six games, eight hundred and forty-one hours and counting. That's what Football Manager has brought me while writing for Wccftech. Those Football Manager games (with links to their reviews) are 2017, 2018, 2019, 2020, 2021, and now Football Manager 2022. Adding up Football Managers 2010 to 2022, it comes to 1982.7 hours (and counting) spent on the games. These are just the ones I have tracked on Steam, not including mobile versions or pre-steam versions. I don't think it's much of a secret that I am a fan of the series or that I love to watch and play the beautiful game, especially if it's a spreadsheet version of it.

With more hours in the 2021 version that I care to admit, and that's after admitting the total hours in the thirteen iterations in my Steam library, I'm concerned about my prospects of having spare time for food, drink, and bathing. Why? Football Manager 2022 is just as addictive. 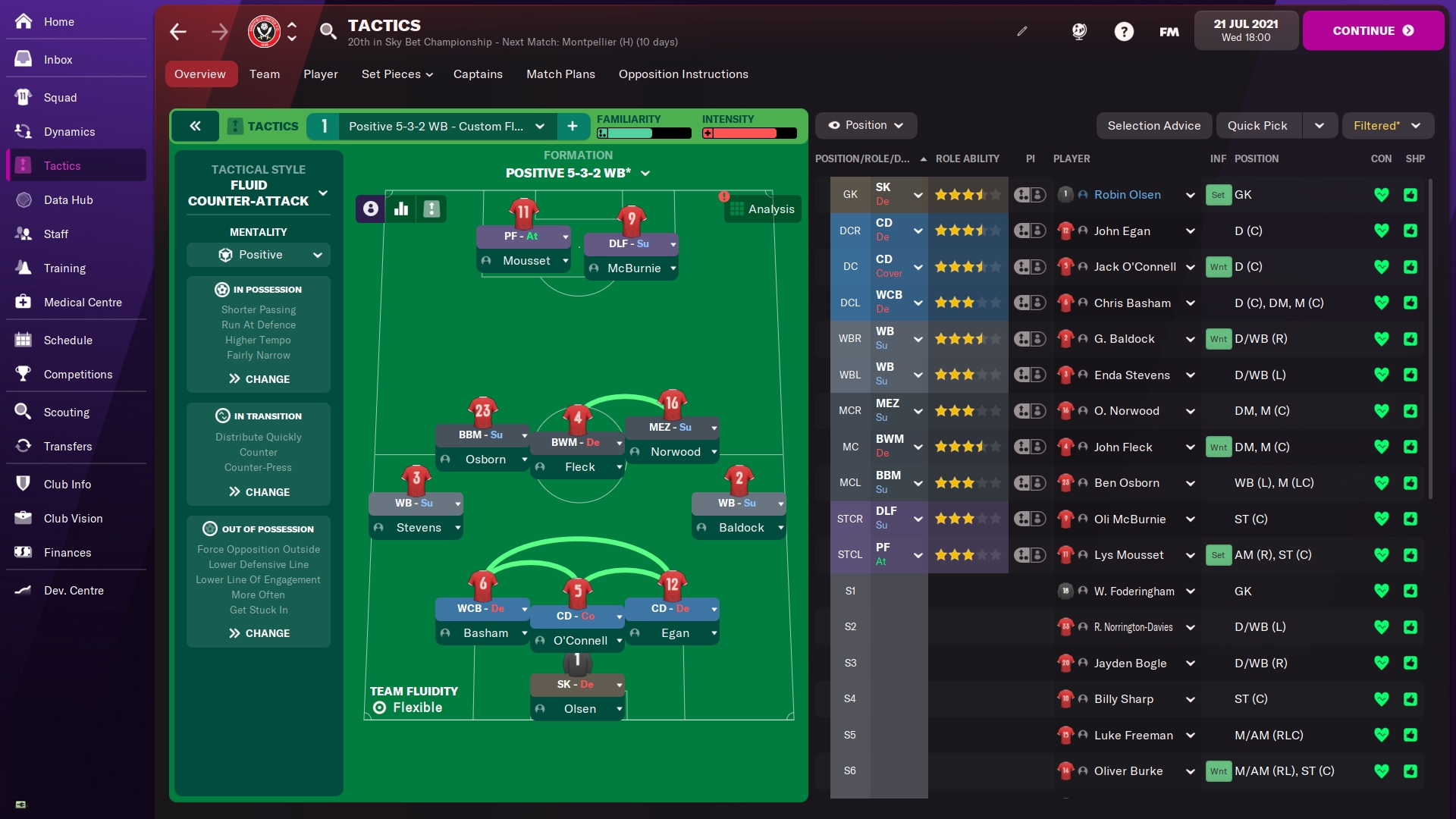 I reiterate myself a lot in these reviews, so this one will be kept short. What Sports Interactive regularly choose from when making their next iteration of Football Manager is overhauling the management side, the back end, or the match engine and how the game looks and plays on the pitch. Whichever they focus on, Sports Interactive will make minor improvements to the other, so which is it this time?

Taking to the pitch in Football Manager has always been a strange one. You're watching your players, and no matter how much you shout at your screen, they don't listen to you. Often a relative asks you why you're shouting, then clearly thinks you're some deranged loon once you tell them, but that is the pain of being a football manager within Football Manager 2022. The advantage is that your shouts and actions within the game seem to matter more than ever before, even if it's unexpected. We'll talk more about that later, though.

What is enjoyable about the on-pitch action here is that it both looks great, and the players seem more realistic. It feels like a continuation of the moves that started in FM21, but the players act more like real footballers. This is primarily down to a complete overhaul and the inclusion of a new animation engine which, as described, no longer ties these 3D players to the old 2D system. I can genuinely say that I've noticed this and all the new elements that come with it.

Players can and will make realistic mistakes, but at the same time, they'll also make sound tactical choices based on what is in front of them. What has been surprising is seeing how the tactics I've been using for three games have changed in impact. Everything is the same on paper, but from being a slower build-up holding 65+% possession in 21, I'm now seeing a drop in possession but a considerable push to the attack, with my wingbacks driving the team forward more than ever before.

It's at the stage where my assistant manager is asking, "don't you want to play more possession-focused football?" to which I respond with a firm no because we are still dominating matches against similar and smaller sized teams. It's attractive and fun to watch the on-pitch action thanks to the new animations and the inclusion of more realistic mistakes - from being offside to mistouches and mishit passes, and even a direct-red for a bad foul - and how the replays highlight them. Maybe I'm mistaken, but I don't remember seeing a red line showing how far I was offside before Football Manager 2022. 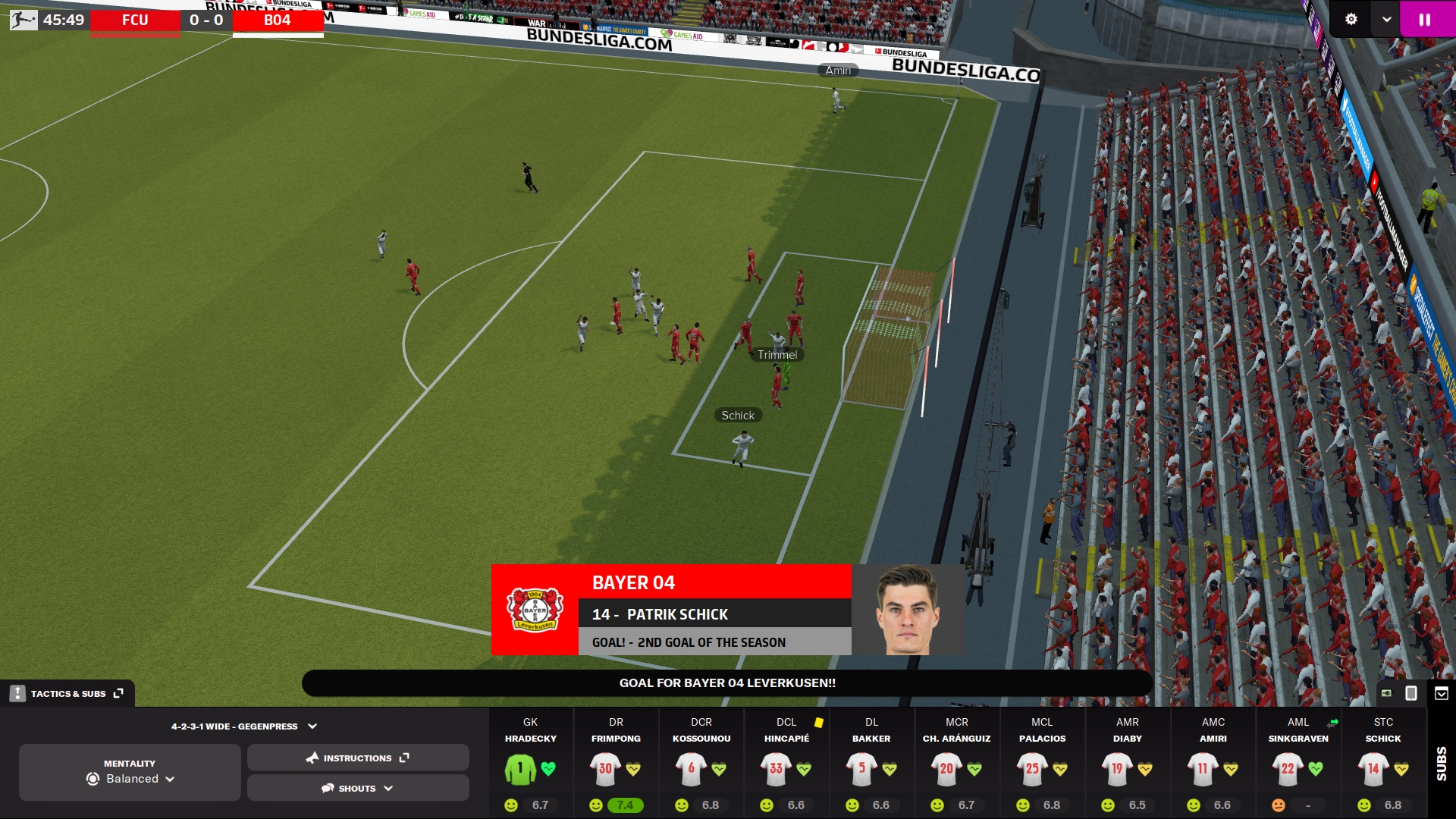 Football Manager 2022 is at its best in these stages, where the data that runs through this game like The Matrix and mimics real life. It always results in a memorable story and match. Mine was an FA Cup qualifying match against Oxford United (I'm always AFC Telford. Start in the conference north, work my way up). For seventy minutes, we pressured them, and they held us off. They even scored a goal against us, a good counter helped by sloppy defensive work. Then the dam broke. My star (signed on a free) striker Yaya Sanogo scored, and you could see their spirit break. We scored again within minutes. Oxford was out. I told my players to settle down, conserve energy. We won.

Small moments like this permeate Football and Football Manager. I don't know if "spirit" is a data point in this game, but I broke Oxford's. I've also seen it happen in other games, and it so closely mimics the real thing, for both a whole team or a single player. But on the subject of data and making an entirely unforced segway, Football Manager 2022 now has a brilliant Data Hub.

Previously you'd get updates from your analysts, but they would spread out across different menus within the game. Now you have the Data Hub. It gives you a wealth of information that allows you to see anything from your average control over different stages of the match, how your passing, shooting, possession - almost anything - compare with the other teams in your current division.

What is even better about the Data Hub is the amount of detail you can personally request. It essentially feels like the min-maxing you'd find in an MMO, but these are also the finer details that real football, and other sports, have become over time. Which of your players dawdle and lose the ball more than others? Are there any that aren't offering the support you'd expect in tracking back? I honestly don't think I've delved into everything the hub has to offer, but I already know it's perfect for people like me. 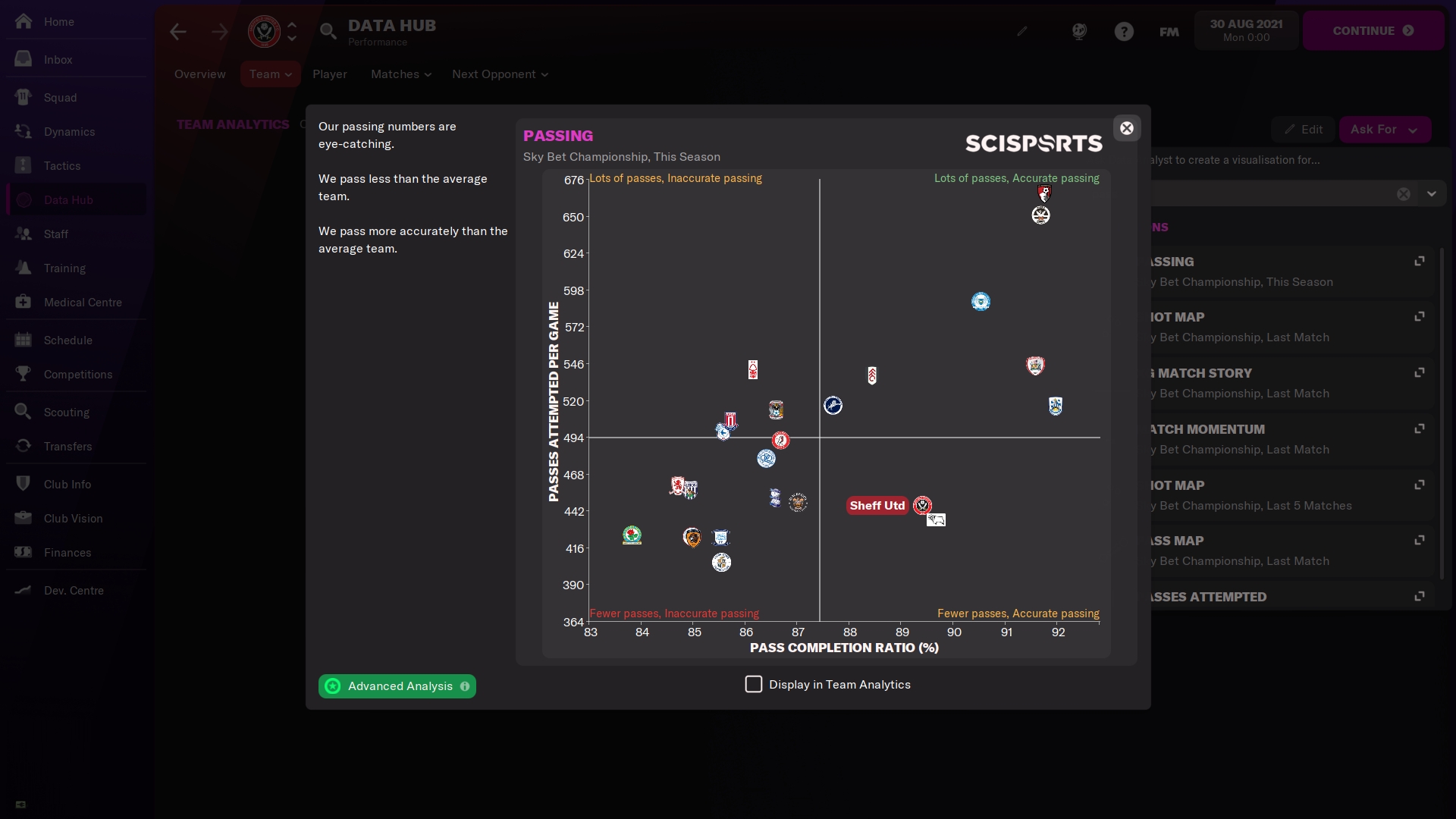 Other areas have also seen a few tweaks, with deadline day - a constant sense of strain for fans around the world as you're desperate to see Man Utd bolster their defensive options - getting an overhaul. Deadline day is even more interlinked with the social media and press aspects of the game, creating an even closer version of the circus the sports gives us twice per year. Linking with this, you have player values that aren't a set figure, such as on Transfermarkt, but now a range, which feels more realistic.

Now, I do have an issue. It's one I seem to say every year, but press conferences and player talks. They are still incredibly repetitive. I'm so tired of seeing the same question from the same reporter over and over again. I wonder if Sports Interactive can put a trigger that stops a question from appearing for at least three or four conferences. Yes, Yaya Sanogo is fantastic. Stop making me agree with you EVERY. SINGLE. MATCH.

I genuinely hope that's the next improvement for Football Manager 2023 because they certainly can improve some of these conversations and how they're presented. One such example, the backroom staff meetings. While not really 'conversations', these meetings show advice in a much more manageable medium, allowing you to act on it quicker and easier if that's what you want to do. That or you can ask another member of staff what they think.

Conversations with agents are also slightly improved, backing you into a corner of whether you're going to make an offer for a player or not interested after enquiring about them. 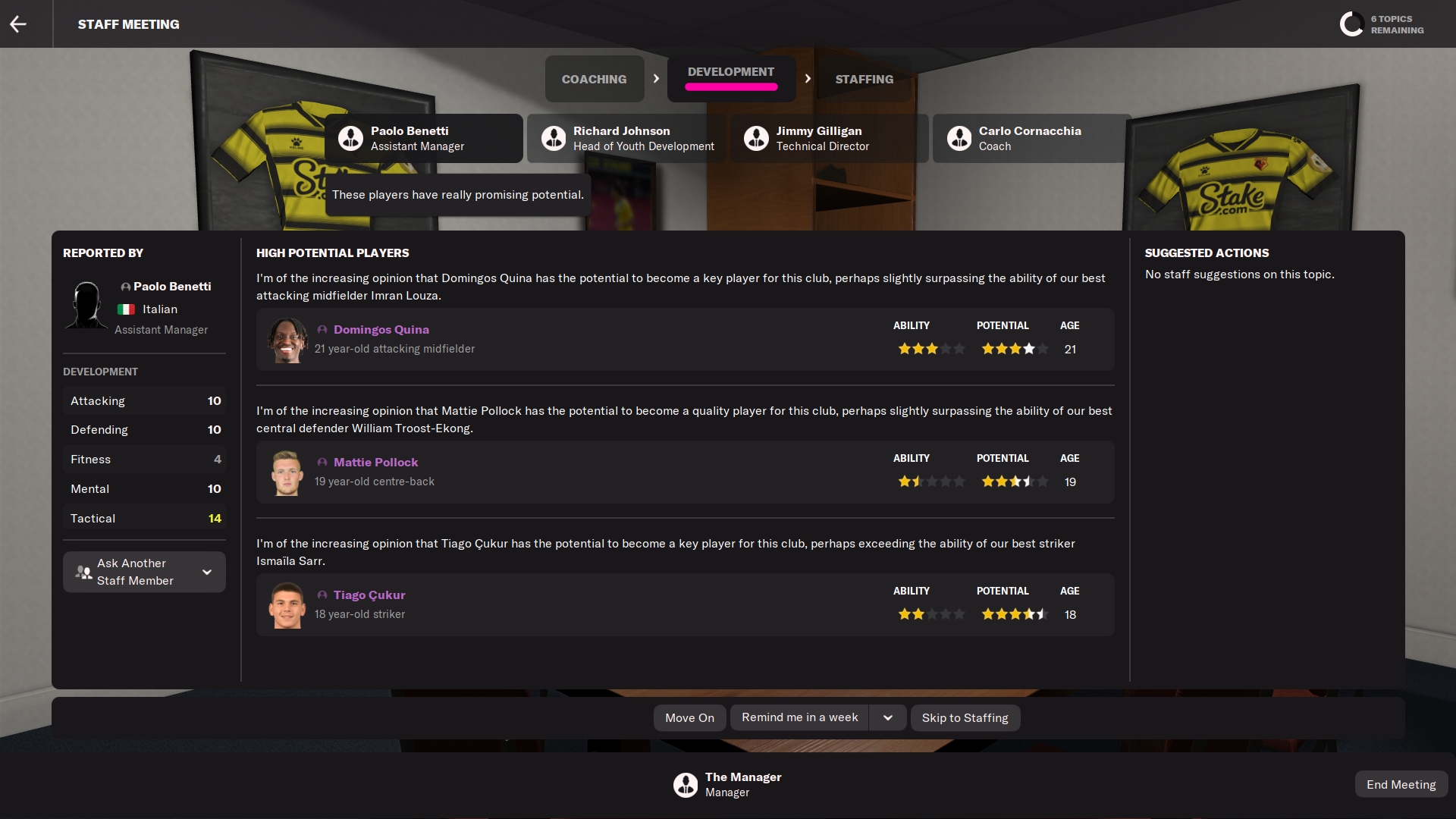 Football Manager is a series that continually offers improvements that can sound small on paper but feel huge due to the nature of the game. Changes as massive as the new animation engine and AI rarely happen, but Football Manager feels like another step forward and closer to the beautiful game than ever before. There's no doubt Sports Interactive could refine other things, but as always, it's the steps forward that highlight what will most likely improve for the next release.

PC version reviewed (copy provided by the publisher). The game is available at a 25% discount via Fanatical.

Football Manager 2022 is yet another improvement on the long-running series, one that brings the beautiful game to life more than ever before and recreates both the small and large moments that make the sport so engaging. The options are near limitless, and the game puts even more at your fingertips, from the Data Hub to improved staff meetings, all adding onto a revamped match engine. This is the closest Sports Interactive has come to perfection, with only small elements feeling aged and needing polishing.