Total insanity. The definition of total insanity is complete or absolute foolishness or irrationality. There's little doubt that this is an apt description of FlatOut 4. The title revolves around madness, wanton destruction and the carnage that follows. It certainly works in delivering the promise the title gives, though not always for the reasons you would expect.

FlatOut 4: Total Insanity is the rebirth of an old series under a new developer and publisher. It also follows the irredeemable failure that was FlatOut 3, which was always going to be an easy task. In truth, anybody who's ever played the older titles will know instantly what to expect here. Sadly, that ends up being the game's problem.

The fine details of FlatOut have never been precise. It's always been a pure arcade game based around wanton destruction, the collision of your car against others and the wrecking of almost everything in sight. How the cars handle have always been fairly decent and this much is kept intact. However, what has been lost is any sense of weight. Driving over even the smallest of bumps will see a truck fly like a paper plane in a storm. One of the largest culprits is any course with railroad tracks, which are the bane of my existence.

What doesn't help matters is the atrocious AI. There's little doubt that one major aspect of the game is crashing into other cars, that's how you build up your boost option. Where the complaint comes is that the AI doesn't seem interested in actually racing you, more just slowing you down. It wouldn't be too bad if they just crashed into you in an attempt to put you out, but too often they'll just grind alongside you, slowing the both of you down.

Were that the only complaint with the AI, that’d be fine. However, on corners they seem to think plowing into you, rather than taking the corner and attempting to win the race makes the most sense. Ramming into the back of another car has a similar effect to having another car alongside you, only multiplied a thousand fold. You can be going considerably faster, hit the rear of another car with impressive force and all that tends to happen is that you're slowed down to an incredibly irritating, slow, pace.

It's a shame because FlatOut 4 has a fair amount going for it. At least it would have if the game would let you take advantage of it. The Career is by far the worst part of any game mode. It acts as any career mode does, but extended to the point of annoyance. Rewards from an event are paltry, which means you'll have to repeat each mode to death until you can actually gain the funds to buy a car from the next group of vehicles. The only problem then is that you're just doing the self-same thing in a faster car. It's insufferably bad design, simple as that.

FlatOut mode highlights where more focus should have been placed with the game. This offers a collection of different modes. The best is a Destruction Derby style of Deathmatch, by far the highlight of the game. Arena mode offers something similar but with respawns, so you're tasked with causing as much damage as possible and finishing with the most points. Stunt mode makes a return from older titles, tasking you to crash and send your driver flying through the windscreen into a target area. Of course, you also have Time Trial, which is a case of just beating the set time. Finally, there's assault - a race with weapons for you to use against the opposition.

Aesthetically, FlatOut 4 is fairly average. The colourful style certainly works well with the type of game that this is. It also accentuates the variety of tracks on offer. Snow, desert, industrial areas, chemical plants and of course residential areas. These are only a small number of areas that feature in the admittedly large number of tracks on offer. What works well is the large amount of destruction on show with the game, as almost everything in the game can be crashed through and sent flying, littering the track for those behind you.

However, there are areas that could have been much better. The cars could have certainly done with a little more detail, as could the scenery. However, the game does have a decent amount going for it. Sparks will fly as cars collide and grind along each other. The sun, particularly on some matches, looks fantastic as it hangs low in the sky with its rays gleaming across and highlighting the scenery.

Sadly the game suffers from a drop in framerate whenever anything too hectic goes on. This is a problem that Kylotonn's other title, WRC 6 - which I recently reviewed, suffers from too. Another shared issue is the audio, particularly the engine of each car. They all sound different but each and every one of them could have certainly been better.

Sadly, the fact remains that FlatOut 4 brings nothing new to the series. While It's certainly better than the previous iteration, it's no patch on the first two titles. If this was just a little more approachable, easier to get into, then the game would have been much better. It's let down by the incredible amount of grinding involved which ends up being frustrating beyond any reasonable level. Other issues compound on this, making FlatOut 4 a mediocre at best, but frequently annoying game. 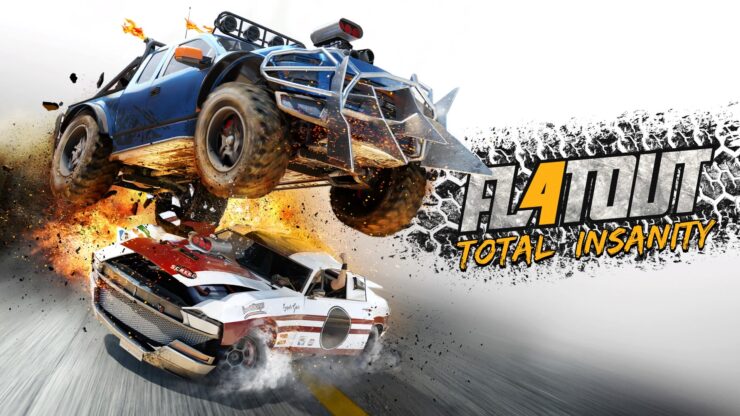 FlatOut 4 is a frequently irritating game that's held down by incredible amounts of grind, it has some saving graces with a variety of game modes and track types, but they don't do enough to balance out against the negatives like AI, physics and more.

WRC 8 Review – A Challenger to the Throne Emerges