When faced with the choice of returning to an emotionally abusive and potentially homicidal family that evidently kidnapped and held you hostage your entire life, or living your life in a peace loving and utopian country where no-one goes hungry, most of us make the obvious choice. Why on Earth would you possibly choose to go back to some dreary castle, when the grass really is greener on the other side – both figuratively and literally? Here we take the obvious choice and side with the kingdom of Hoshido, forsaking the black armor, dark castle, and my elder sister’s large breasts (I was adopted so I think that’s okay).

After reading the above paragraph, you essentially know what happens in the game’s opening prologue – the life you lived turned out to be a lie and there’s been a far better one awaiting you the entire time. Upon arriving in Hoshido you are instantly welcomed by (almost) the entire family and- boom, tragedy strikes. Of course it does. The Hoshido royals cannot ignore the aggression shown by Nohrian troops and must retaliate – your character, being the latest royal, gets tied into the war, having to face down former friends and family while trying to overthrow a dangerous and destructive King Garon.

The gameplay is the same as Fire Emblem has always been when it comes down to it, turn-based strategy set on a grid. Units on foot are more susceptible to changing terrain, flying units are at risk of bows, sorcerers don’t do well against physical attacks, etc.

All of the advances Awakening made in combat and gameplay are intact, with very little changed since. Units stood next to one another can help, and their relationships can be developed inside and outside of battle, eventually leading them to offer massive bonuses when placed next to one another in the future. It’s a simple system, but one which cannot be understated – the personality and relationships of the characters really do make a tangible impact on gameplay and combat, making all those bonus scenes and marriage cutscenes more meaningful than if they were simply thrown in for story purposes.

Outside of battle, you’re given management of a large castle interior, which you can build weapon shops and more inside of. The Arena allows you to gamble resources on battles, while other shops and stores allow you to upgrade the weaponry and equipment of your small army. Building and managing the town is a fun aside to the game’s typical combat and is a nice palate cleanser after an hour of hard battling. 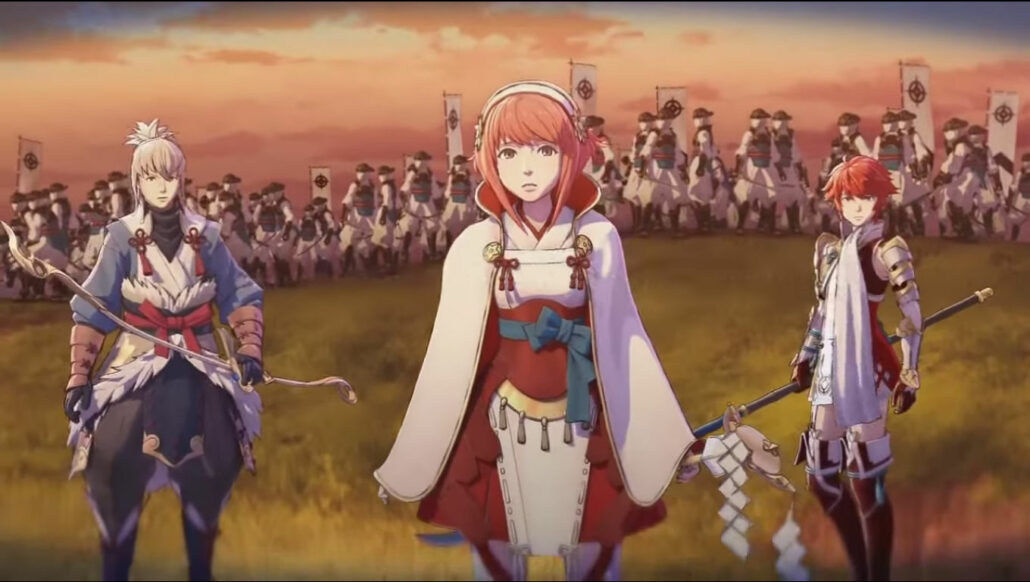 Well, hard battling being subjective, of course. Birthright claims to be the easiest of the three Fire Emblem Fates game stories you can choose from, offering more experience and less solid challenge than Conquest and Revelation. Difficulty can be changed mid-game, but it can only be turned down – so you can’t quickly and cheekily swap it for something easier for just one battle. Permadeath – Fire Emblem’s “Classic” mode – is of course still present, with the addition of Casual, with Permadeath off, and Phoenix which just revives any felled characters instantly – a bit of a cheap option, but completely unnecessary and easily ignored for anyone even half experienced with the strategy genre.

So how’s the cast in Hoshido, then? Err, pretty typical, actually? For Fire Emblem Fates to bravely split it’s cast into two distinct halves, and then have both sides behave almost like mirror halves is laughable, honestly. Both sides have the strong brother – the next in line to the throne, the youngest sister, the elder sister, and the brother with a bit of an attitude problem. The royal family on either side seem to make very little difference, and the rest of your crew of Hoshidan warriors feel fairly generic. Character designs and attacks have been changed up in Fates, but for the most part it just gives old favorites a new coat of paint – and it feels that way for the secondary cast too, with the battle-scarred female warrior, the sultry mage, and dim-witted knight archetypes all accounted for – and that’s just to name a few.

But it fills me with great pleasure to say that Birthright’s end game payoff is a payoff indeed. The final few chapters ramp the story up and include some fantastic scenes which wrap up the entire story quite elegantly. Few threads are left loose, if any, and some surprising interactions and development happen between characters that could’ve gotten away with having none whatsoever. All of that, on top of the tried-and-tested Fire Emblem battle system makes Birthright one of the best games to get for your 3DS, if not the best strategy title.

But before that, Hoshido will fall, and Nohr will rise in Conquest…

I don't think there are any bad Fire Emblem games, and despite that Birthright still manages to be one of the better ones. Conquest and Revelation already have a lot to live up to...