Forgive me, father, for I have sinned. Before FIFA 22, it had been five years since I last owned the Adam Johnson of the games industry. Part-way through the story of Alex Hunter, I realised it was time for me to put my money where my mouth is. I decided not to play this version of electronic football and stick to one that is superior. I chose only to play the one that doesn't lure people into poverty with the promise of cards, stealing their innocence - and money.

I still have a little bit of a sense of victory in the fact that I haven't spent a penny on the game. EA sent a copy, after launch, for review purposes. I'm reviewing it, after launch, with a sense of bafflement and victory. Why? Well, I almost did spend some money. I tried to buy some FUT points because I have terrible impulse control. The game said I couldn't buy any at that point, with no explanation as to why. I never tried again; you missed out on some money there, EA.

Maybe it's when the Alex Hunter story started, but FIFA seems to have moved far beyond the sport on the pitch. The start of FIFA 22 is a cavalcade of big names, the game just showing off the faces it has and the people it could get to do a quick line or two for the game. I'm not sure what Beckham was doing in Paris, but he's the first significant person you meet. Not much after that, you've got Eric Cantona just randomly sat on a bench in the middle of Paris feeding pigeons. Thierry Henry, currently the assistant manager of Belgium, is at the Parc de Princes for some reason (Henry has never played or coached at PSG) and training Kylian Mbappe - finally, a PSG star.

Why so many faces for random cameos? I don't know. I also don't know why Lewis Hamilton (an Arsenal fan) or Anthony Joshua (Watford/Real Madrid) would be in Paris to watch PSG vs Chelsea. I suppose it was just a way for EA to get some use out of assets from FIFA 21. You can still use them in FIFA 22 if you want to start jumping into the editing. That's not the point anyway; my point is that FIFA 22 seems to be enamoured with the idea of football rather than the game itself.

It isn't a bad thing. The move towards including all elements of football has its cheesy moments, such as the intro. Still, it comes with benefits like Volta, a fleshed-out career mode, and all of the other game modes that go with it, as well as little training sessions, the ability to jump into a game, or Volta's quirky arcade games. This arcade mode is just fun and funny. It feels more like I'm playing some strange game on Fall Guys or some other similar quirky game-show title, rather than something that you find in FIFA.

The simple fact is that FIFA and its ever-encompassing reach is adding more for players to do. Different styles of football, little side games, online leagues, playing as a singular player, or playing as a team online. There's more, but you get the picture. However, as lovely as that picture is, there's always the truth beneath. There's always that insidious creature, just waiting to lure in unsuspecting children - and adults, EA are equal-opportunity predators. It's time to talk about Ultimate Team.

My thoughts on Ultimate Team aren't exactly a secret. I was furious two years ago when EA sent some snivelling liar to the UK government and tried to pass off FUT packs as something akin to a Kinder Surprise, calling them "Surprise Mechanics". The simple reality is that FUT has always been predatory, and I should know - having spent hundreds of £ on the bloody thing before I decided to stop. I couldn't afford to either, not like I technically can afford to now. Granted, in the hellscape that is Britain, I may be burning FUT cards for heat soon.

FIFA 22's version of Ultimate Team feels almost as shameless as the countless F2P cash-grabs out there or the digital casino that is NBA 2K. There are so many objectives, but small and large. The small ones are just easy enough that your brain keeps getting that rush, and you want to come back for more. Opening packs, again, it's the same rush as I get from a slot machine. It's gambling, and it always has been, it always will be. It's insidious, how it gets its clutches in those who know better. But when it comes to those who don't or those susceptible, it's atrocious.

I'm not even sure that the game is reasonably generous with the in-game currency is a good thing. FIFA 22 is already pressuring you. You'll build up your points to open a few of the inordinately expensive packs, but you'll never get enough to keep your team running at its best, and certainly not at the higher levels. That's how the real-money worm buries its way deep into your brain. You know that's the only way you can get the best. EA knows that's the way people will only get the best. The sad reality is that it is gambling, and it's damaging kids and adults alike.

It's a shame I have to complain about FUT that much, but it is horrible how the system works. If FUT were a standalone free-to-play title, rather than bundled in with each game, resetting every year and cancelling the billions of pounds that people spend on it, I wouldn't be bothered. It's a shame because FIFA 22 is great on the pitch, and I'd like to give it praise without having to point out the fact that it is one of the worst predatory games in the industry.

Let's talk about the on-the-pitch action in FIFA 22. There's no doubt that EA has driven this series to be much closer to real-life than ever before. Players feel weighted while on the ball, and movements are more realistic than ever before. Even the ball feels more natural as it bounces or rolls along. Players will duck and weave off the ball during a run, while others will sit back and poach. Defending, you've got a lot of overlapping players, ones covering each other, and the professional foul.

This is the HyperMotion technology that EA talked about, and it honestly works. It's impressive to see players on the pitch acting like their real-world counterparts. There's a sense of believability that no other football game has ever honestly managed before, with even the smallest of motions captured and represented. It allows the players on the screen to never have that between-animation jankiness you would often see in prior versions.

I'm not going to say it's perfect. I've still had a few hiccups here and there. Keepers are still the primary culprit. I've had a keeper contorting in mid-air like he's the most flexible Cirque du Soleil performer in the world. I'm not sure if this is because keeper positioning and direction hasn't been perfected, or if my keeper was Mr Fantastic, but it's just something that stands out the closer to reality the game gets.

Audibly and visually, FIFA 22 also has the same effect as the on-pitch action. It truly is next-generation, and it looks fantastic. Players look like their counterparts, even if my create-a-player looks like a dead-eyed monster from the otherworld, and the amount of detail is impressive. It's a small niggle, but even though I'm impressed by the hair physics, the closer you get to the hair, the more it seems to move in a block and unrealistically. Also, I've noticed a few players' eyes roll unnaturally. I'm honestly not even complaining about this though, it's a football game, and I'm picking at their hair and eyes moving a little unnaturally.

Playing on the PlayStation 5, I can't help but think that FIFA 22 is honestly next-level. I don't know if the past-gen or PC versions feel different, I've heard they do, but I can't judge that. I have a few other issues, such as the menus feeling like a bit of a slog to go through and how Ultimate Team is pushed front and centre, but these are either small niggles or a personal hatred of predatory tactics; I can't honestly knock the game. It's a shame because create-a-club is excellent; put that front and centre.

If I were to add anything else, FIFA 22 could be divisive. The advancements here will likely be celebrated by fans who want a more accurate representation of the sport. Those who liked the older, almost simcade, FIFA style may find this a little too slow and sluggish. I fit into the former camp, and I can't help but think FIFA 22 is an excellent football game. 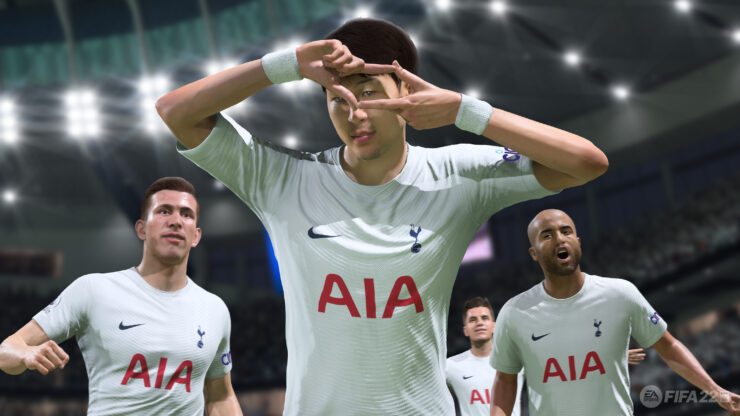 FIFA 22 is an undeniably fantastic football game, once you get on the pitch. HyperMotion Technology, and a push for enhanced visuals, physics, and more, make this an incredibly tactical experience and closer to the real thing than ever before. The inevitable problem is when you look at the insidious inclusions off the pitch, such as FUT, which - while somewhat more generous with the in-game currency - is still incredibly predatory and push on the in-game gambling mechanics.