A year and a half ago when reviewing Fallout 76 I noted that the Doomsday Clock was set at two minutes to midnight. It's currently at 100 seconds to midnight, the heightened risk from a xenophobic merkin-wearing pumpkin actively raising the risk of nuclear war combined with a global pandemic causing increased geopolitical tensions as well as the threat of global warming and other human stupidity, we have a world primed to resemble that of Fallout 76: Wastelanders.

Fallout 76 was a land deprived of life, joy, and fun. With a breath of life put into West Virginia after Bethesda's earlier outing, am I enjoying this as much as other similar titles or as much as I should be enjoying a Fallout game? Honestly, I'm still pining for the bright lights and bustle of New Vegas. 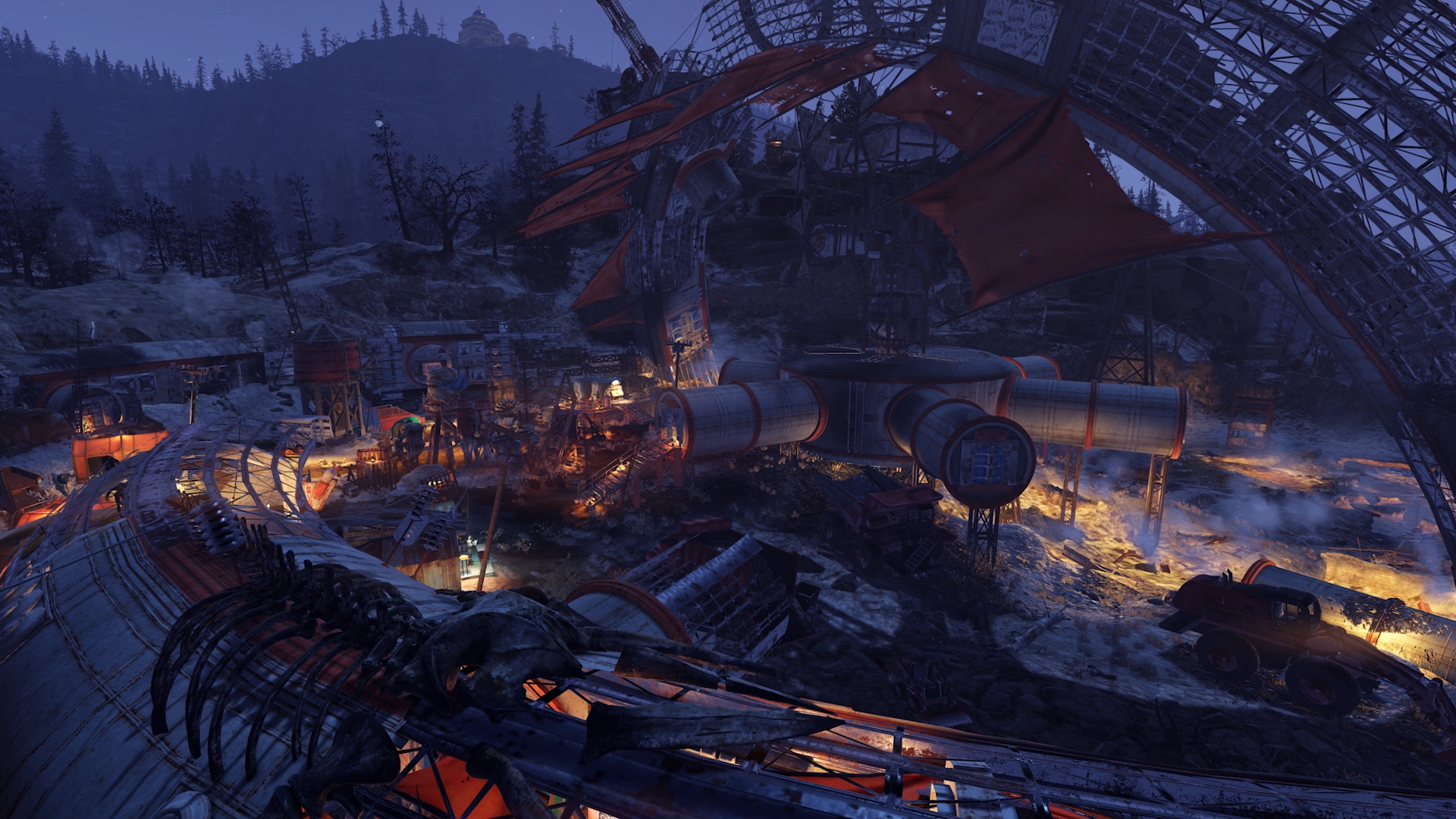 Playing Fallout 76: Wastelanders has felt like more of a chore than even playing Predator: Hunting Grounds, despite this arguably being the better game. It will at least get a higher score, despite the fact that I had more fun playing as Mr Clicky than I have done with my new character. Why a new character, you ask? Well, I was asked to experience the new content as a fresh-faced vault-dwelling newbie. It's actually the worst thing to do. Don't do it to yourself.

Why? Simply put, you can't explore all the nice little quirks of Fallout 76: Wastelanders dialogue and quests fully if starting as a new character. There's no way that you've got your SPECIAL Stats to meet any of the required levels of charisma and so forth. Your very first event and discussion involving a quest-giving human require you to have levelled up a few times more than can be reasonably expected to enjoy some of the optional dialogue. This persists throughout.

That's the issue, if you're actually wanting to see this new content and explore it in a meaningful way, the game actively punishes you. The stat requirements need to be lowered for dialogue trees in the new quests and at one point the game actually stops dead in its tracks if you haven't levelled up enough. The level requirements for some of the quests later is 20. If you've been following the story with little extras you won't be level 20, sadly a cold hard fact. That's when you get to enter the lifeless, the interminably dull - the rest of the game.

I should say that this has been slightly improved with the inclusion of NPC's outside of the instanced areas. Oh yes, the primary quest-giving Wastelanders NPC's are in instanced party-only areas. They're essentially segregated off, which is understandable since certain events happen and you wouldn't want an idiot to kill somebody, essentially locking you down a particular path. I suppose it's good that the interminably dull rest of the game isn't interminable anymore. 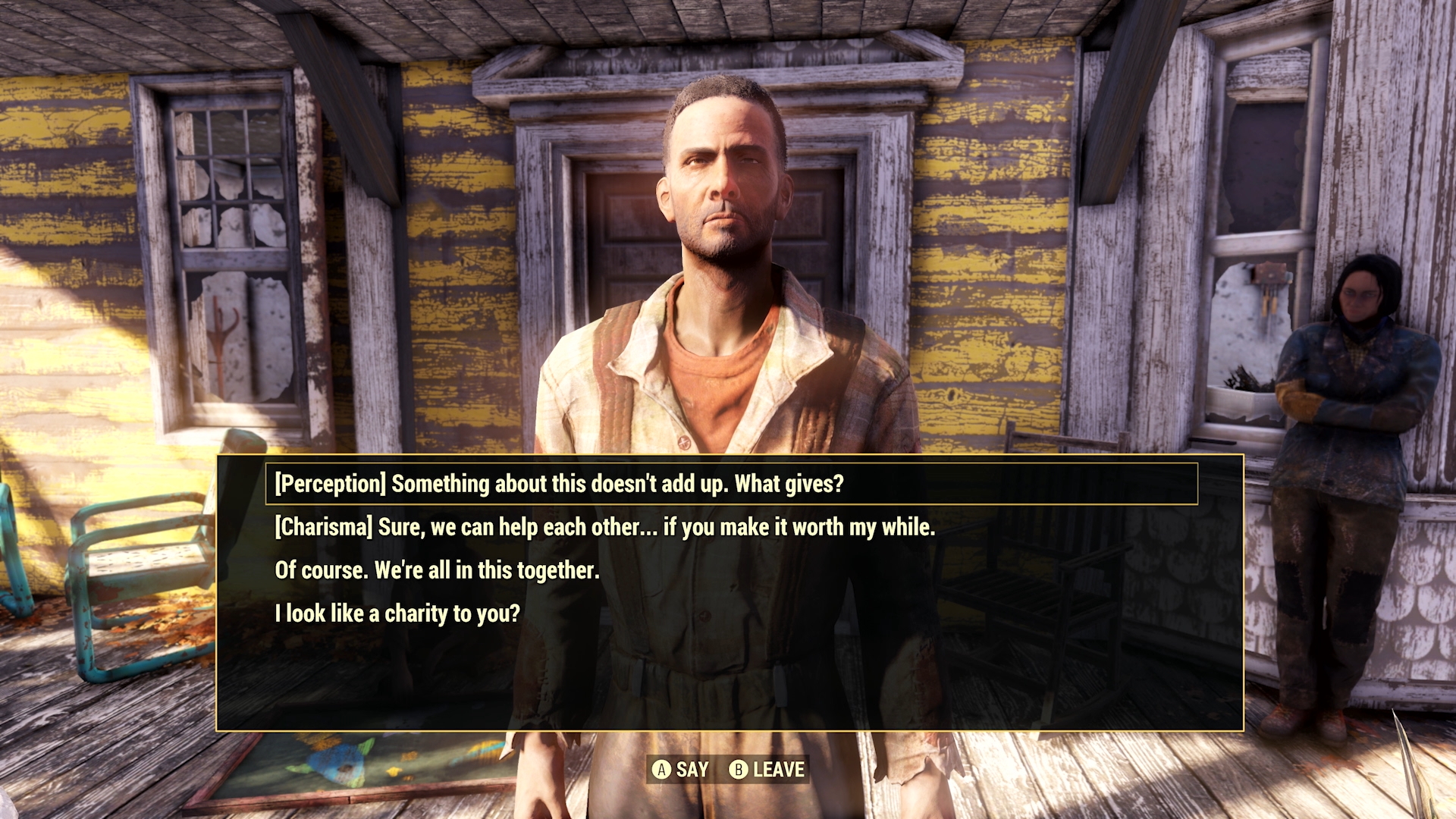 Still, this isn't a review of the rest of the game. For that, just read my Fallout 76 review of Fallout 76 since little has changed. Let's cover what aspects of the base have changed though. One such improvement is with the aesthetics. Fallout 76's lighting and shadows have had a large upgrade, with colours popping more, making the wasteland looks even more vivid than before. It's still not a great looking game by any standards, even ugly up close, but there's something great about long-shots of the far-away wasteland. When the textures aren't popping in, that is.

It's also worth pointing out that some of the bugs that littered the original game have been fixed. There are still many bugs that are remnants of the original release, such as enemies floating in mid-air, unable to be touched or ones that will follow you to the ends of the earth. You'll find floating objects, bugged quests, buildings, and more. Also, much like the non-NPC quests, you'll find some new quests bugged to hell, requiring you to jump out of a building or even restart the game to progress.

Audio bugs also still appear, with holotapes still not playing at times and, at other times, repeating themselves. I haven't had the repeating gunfire from before though, so that's a bonus. Now the issue with audio can come from character interactions, where a little of the voice acting can just sound bad. I've also had issues where the audio was placed as if the character was to the side of me, rather than in front of me like the NPC that's talking to me.

Before I forget, there is something glaring and it's either a massive bug or Bethesda are just lazy - why can I steal from NPC's without getting a bounty, even when they're stood right next to me as I pilfer their worldly belongings? This is made all the more obvious when you get a bounty for stealing from a human player who is on the other side of the map and nobody sees you. 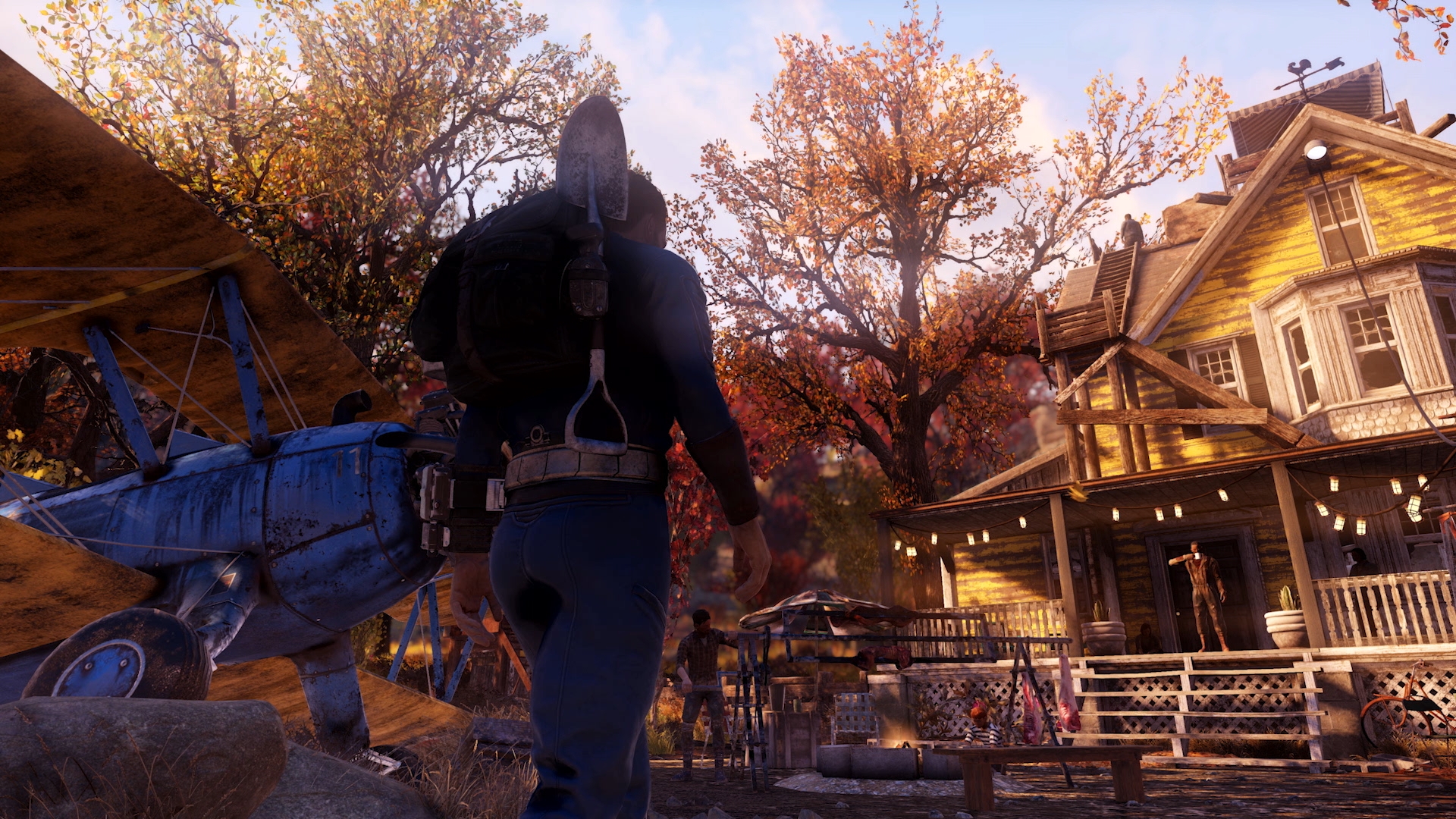 Okay, so this has been mostly negative so far, but let me say that the dialogue and storytelling of the Wastelanders content in Fallout 76: Wastelanders is great. Characters have personality, your SPECIAL abilities and decisions have genuine consequences - which is why I don't agree with them setting the bar too high, forcing you to play the rubbish stuff. I've found myself laughing and smiling, I've actually cared about some of the characters even more than I thought I would.

Bethesda can still write a good game and they've piled all-in on the fifteen or so hours of narrative joy in a clear over-compensatory reaction to the complete and utter mess that is base Fallout 76. The fact you now have raider camps and other chem-addled humans to slaughter also make West Virginia feel like it's worth exploring, especially because you get loot at a faster pace. Granted, the increased fighting does highlight the maintenance system designed around getting you to buy repair kits for real money... No Chris, be positive.

The quests that run through the storyline are fun and engaging because of the people you interact with. It's the personality of these that raise the stakes and can get you through the dull to experience some of the fun that's been injected into the world. More than this, there are actually personal stakes, such as getting a few ally NPC's to live at your home when you build it using the CAMP system.

Much like before, Fallout 76 can offer some engaging multiplayer gameplay. Wastelanders doesn't completely work with this when it comes to the instanced areas - either you enter the party leader's instance, it having no impact on your progression and you being unable to influence anything, or you all enter your own separate instances. I completely understand this though since you don't want other humans wrecking your progression or making choices for you. It's still difficult to enjoy the content with others though, the whole crux of a multiplayer game. 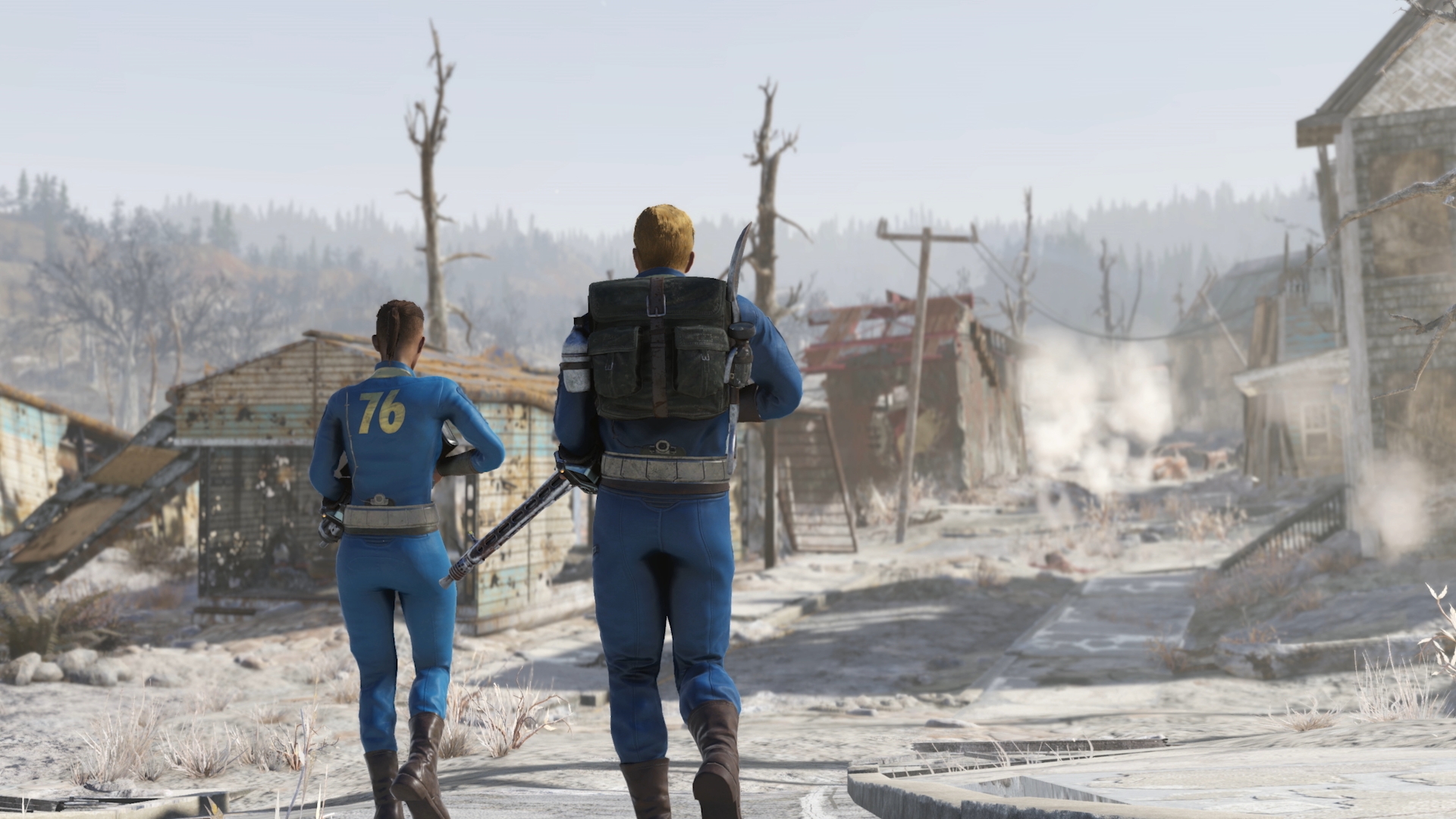 If I could go back, I'd downgrade my original score of Fallout 76 to 4 or 4.5, if only because even now Fallout 76 only feels just about passable. The fact that it's had such a massive amount of work done to it and even now it’s only just passable is damning. If The Elder Scrolls VI and Starfield are as janky, buggy, and as much of a mess, Bethesda won't be forgiven. The issues and dated aspects have lost their charm and are just bad, especially when other developers can put out a higher quality game on the same scale, but with fewer resources. Put simply: Burn the Creation Engine.

Fallout 76: Wastelanders is Fallout 76 but better, but better doesn't mean it's good. The NPC's, while very welcome, don't feel like a part of the world and don't even act like regular Bethesda NPC's. The game, as well as new content, is still riddled with bugs and the microtransactions highlight certain design choices made in development. It can still look great and it can still be a pleasure to explore, but the cons outweigh the pros of a game that felt more dated than its predecessor which launched three years earlier.

Fallout 76: Wastelanders is a clear improvement on Fallout 76, with NPC's actually making West Virginia feel like it's worth exploring and doing things in for the first time since the game was released. The new quests are entertaining and engaging, featuring characters that are genuinely enjoyable to interact with and will put a smile on your face. Sadly, these are still too far apart and the core problems that held Fallout 76 back remain, particularly as a new character has to play the interminably dull and lifeless original content just to experience what was brought in with Wastelanders. It also doesn't help that this is riddled with bugs and the game has a number of issues with the mechanics that are only fixed by microtransactions and a subscription service.