The AIO cooling solution industry is certainly advancing rather quickly, moving from what used to be more of a boutique or niche product, into the mainstream due it's affordability, increased reliability and relative efficiency. Sure, there are good solutions for far less, but if you plan on overclocking at all, a better solution that can continually dissipate more heat would be wise.

AIO systems are a fantastic alternative to traditional air cooling, though there is very little variation in the market, with them made by two or three different OEM's and marketed to the various brands we know and love. There are other easy to install true water cooling kits, such as Alphacool's ready to use kit, which is great, but the AIO concept is still appreciated

Keeping that predatory heat at bay with the EK Predator 240 AIO Liquid Cooler.

EK is very widely known in the enthusiast community as being a purveyor of some very well made liquid cooling components for all manner of different PC components. You can find water blocks for motherboard chipsets, Mosfet's, the entire motherboard itself, and of course GPU and CPU water blocks. Their own branded radiators and pumps, too, are quite efficient and held in high regard. The rise of easy to use and install AIO solutions gave EK an interesting opportunity, one that no other enthusiast water-cooling house has yet to capture. The use of their own components in a closed-loop system that's completely an in-house affair. This means a chance to have better and more reliable components.

At the core, the EK Predator 240 is the integration of some of their best components that's pre-filled and easy to install. It has one of their top performing CPU water blocks with their own branded DDC pump and a CoolStream PE 240mm radiator. All pre-assembled and just as easy to install as any AIO, except this is real water cooling right here, and for $199.

The CPU block they used is their flagship product, and is compatible with LGA-115x and LGA-2011 (original and 3). The bracket is pre-installed for some surprisingly easy installation, and it comes with their very efficient Ectotherm TIM that thankfully is non-conductive should you decide to apply it liberally. Remember that with thermal interface material, so long as it's non-electrically conductive, you can apply copious amounts and the temperature won't be terribly negatively affected, and it's better to apply too much as opposed to too little. The radiator is 40MM thick with a true and full copper core, copper fins and copper tubing. It's absolutely massive and feels substantial.

The pump is connected to the end of the radiator via a slick looking bracket, and is completely integrated. It's not specifically mentioned, but it appears to be very similar, or based off of, the EK-XTOP DDC pump of theirs, a compact yet immensely powerful pump. The one on the EK Predator uses just a scant 6W and is PWM capable, so it can adjust based on cooling needs.

The tubing they're using here is their own Zero Maintenance (ZMT) tubing that uses EPDM rubber that's very stable with an internal diameter of 10mm. It's very robust, thick, and has been proven as one of their staple products already. It's a long lasting product, owing to their marketing of the EK Predator as an AIO that indeed doesn't require any kind of maintenance whatsoever. These are connected to the radiator and CPU block with their own compression fittings in silver. I don't doubt that in the future this kit could be offered with different colored fittings as well as different tubing. Or really, you could just change it out yourself if you wanted to.

The fans are really what can make or break a good AIO system. Sometimes the fans included can provided a great noise profile but with tradeoff's in performance. Rarely are the best fans ever used for the situation, despite claims, in all kits. Cooler Master's Silencio fans are well regarded, though apparently they aren't supposed to be selling some of their AIO kits in the US at the moment.

Regardless, I've always exchanged the stock fans with Noctua's offerings to be both silent and provide good airflow with a decent static-pressure for pushing massive amounts of air efficiently through a radiator. In this case, EK has opted to include two of their Vardar F4-120ER fans, capable of pushing out up to 77CFM at a modest noise level of 33dBA. These are extended range units, which means that they can be controlled in micro-increments from 25% to 100% of it's range, up to 2200RPM.

So how exactly does this pre-assembled true water cooling powerhouse perform? We take a look at just how well it can do on one of the hottest chips available today, the 5960X. It was overclocked to the same frequency as with the Alphacool review to be able to compare properly. 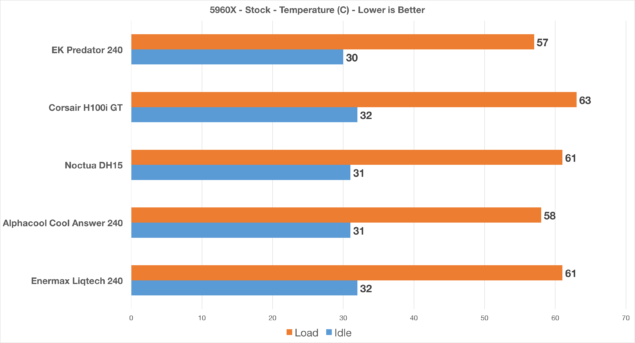 The same testing procedure was used here, except the 5960X was overclocked to 4.2GHz, a rather stable frequency for testing, but not something I'd use every day. 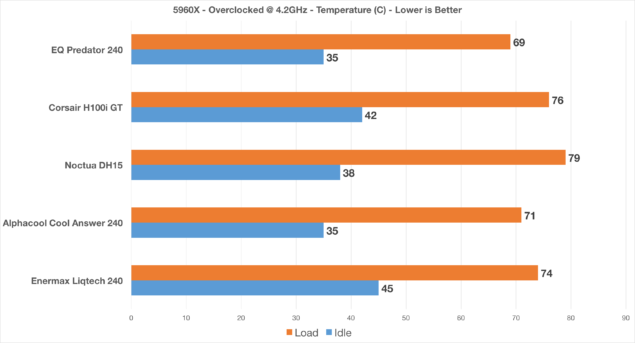 The noise level was measured with a Dr. Meter MS10 dBA sound meter from 1 meter away from the PC itself. Noise is an ever present issue, and with water cooling it can come from a number of different areas, such as the pump, the fans and even the flowing of water itself. As we know from the Radeon Fury X, sometimes the pump can provide an audible tone that's more than just noisy, but annoying as well. Thankfully, that isn't the case here. As the pump itself is high-speed, it can barely be heard. The fans themselves are but a nice gentle 'whooshing' sound that isn't unpleasant at all. They get to a reasonable level, but not higher than the famed Noctua DH15, and it's even far cooler, at the same noise level. 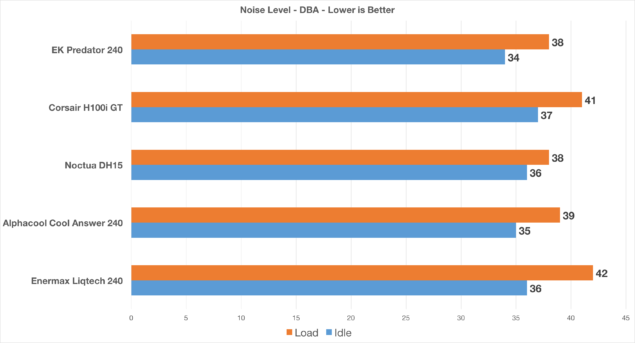 It's really not much of a surprise that EK's solution is the better performing one. It's essentially their best separate components combined for a real water cooling system made accessible to everyone. It cools like beast, looks like a beast, and it's an incredibly easy installation. The problem might be with the price. It's perhaps the best performing cooling solution you can buy that's already assembled. But at $199, it might be prohibitive as a purchase for most people.

That price, however, shouldn't be a concern for those looking for the ultimate performance for their ultimate performing PC. This will enable incredibly cool and stable temperatures for good overclocking, but you will pay a price for it.

Is it worth it, then? Yes, it's worth it if you want the best that'll also last for a long time. This could theoretically be used for many different generations of Intel CPU's, if the mounting holes are the same, and be effective for everything. This isn't a budget solution for your budget PC, but it isn't marketed as one either.

I'd say that if you're looking for ultimate, and easy to use, then this is definitely the top tier of coolers.

It was kindly provided by EK for testing.