[Review] Keeping it Cool With The Alphacool NexXxoS Cool Answer 240

Keeping your CPU cool is a good thing for a number of reasons. It reduces the stress put on it by heat thereby allowing it to last a little longer, the lower the temperature the more potential there is for overclocking, and we generally feel better when that maximum number that we reach is as low as can be possible.

Thankfully there are a lot of good options available to keep things nice and chilly. Air coolers have become sophisticated powerhouses that can dissipate tremendous amounts of heat while still providing very low noise levels, and even low profile solutions can be adequate for keeping most CPU's cool during most lightly strenuous daily tasks.

Then we come to the all-in-one water cooling solution. These are considered the epitome of efficient cooling and easy to setup cooling. Plug and play is the essence of these kits, requiring that you only apply thermal grease and thus attach the CPU cooler portion. And they do provide a great deal of cooling prowess. But what about custom water cooling solutions? Remember those? While generally something more suited to the enthusiast that wants to have maximum efficiency with expandability options, such custom water cooling loops can be accessible by nearly anyone.

Custom water cooling loops made easy. They really can be better than AIO's.

The summer is inevitably hot, no matter where you live, the relative increase in temperature can be quite uncomfortable. It's also uncomfortable for your PC as well. Hot ambient temperatures mean an increase in the lowest possible temperature your CPU can reach. The more efficient your CPU cooler, then the more likely it'll be to reach even lower towards that magical ambient number. Without an elaborate phase-change or liquid nitrogen configuration you won't reach lower, but even getting to ambient can be a godsend.

And quite frankly a custom water cooling loop has far more potential for better cooling than a typical AIO solution. That isn't to say that those AIO's aren't great at what they do. On the contrary, they are a great evolution in cooling, being able to sometimes provide a very good price/performance ratio. But, there are limits, in both expansion and even in cooling ability.

Not everyone necessarily is looking for expanding their custom water cooling loop to include all of their components, and that's alright. Sometimes taking the GPU cooler off can be a bit daunting, and of course can void the warranty. Those are all very valid concerns. It's not necessarily an act for everyone, but that also doesn't negate the utility of using a fully custom water cooled loop either. They can be very effective for the CPU alone.

In fact, it's not uncommon to see radiators for each set of components. Two, or more, radiators can add cooling value not in how much lower the temperatures can be, but in the smaller delta between ambient temperatures and the ability to keep that delta lower when the voltage, and thus heat, increases. There's simply more surface area and more coolant volume to help keep things at a stable temp.

Alphacool has been doing this for some time, putting together kits that take the guess work out of what's needed for a proper water cooling kit. It's actually quite a nice gesture, giving you everything you could possibly need, including high quality fittings and tubing. Granted, this isn't the enthusiasts way of choosing the best components, though these are the same components you can get separately, just curated for the uninitiated.

My first Alphacool kit like this was back in 2007, and it was my first foray into water cooling altogether. And I must admit, that even for a complete novice back then, it was delightfully easy to assemble. Quite literally all you have to do is follow the directions. I think it's primarily the challenge with putting it together that scares people. But it's not hard in the slightest. Perhaps a bit more time consuming, but once together, it can be very rewarding.

In the kit there is a radiator, a 5 1/4" bay water reservoir, water pump that fits onto the water reservoir, fittings, a length of tube and of course a very well designed CPU water block. It retails for $217.39 at aquatuning.us. 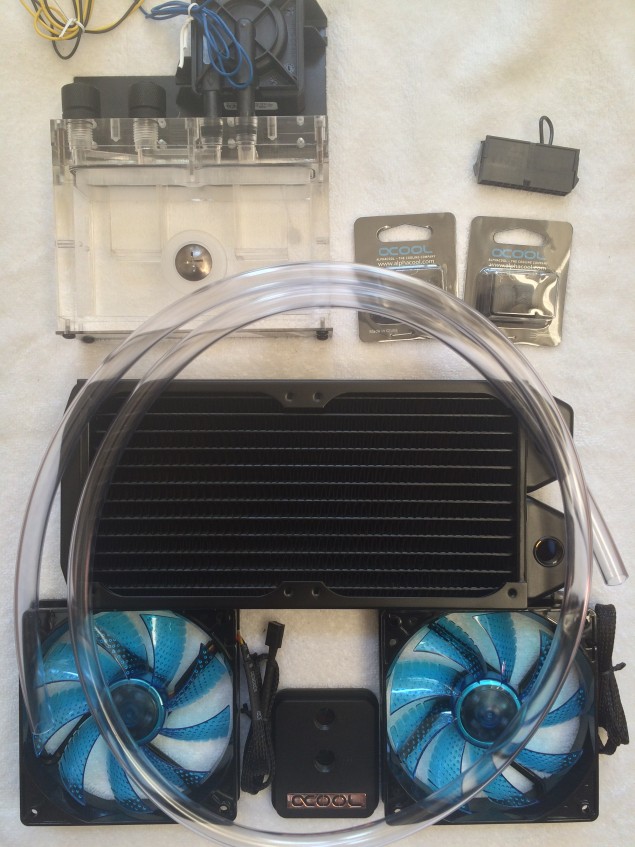 This water block is understated in the looks department, offering a simple black top  with centralized inputs and a very thick, and shiny, copper block on the underside. Inside sees a crosshatch pattern with each individual pin being 0.5mm square and 2.5mm tall, what Alphacool has determined to be the ideal size for transferring heat. There is also a mounting kit for all current AMD and Intel CPU's and a small bit of thermal paste included.

This radiator is 46MM thick and features only a modest amount of fins per inch at around 12/in, which is the opposite of what some AIO's even tend to use to make up for decreased overall efficiency. There are outlets on all sides of one end of the radiator, so you may customize where the loop enters based on the location of the radiator. It also has mounts for up to two 120MM fans per side.

A neat little reservoir that fits easily in an open 5.25" bay and has mounting holes specifically for their Laing DDC pump. It's completely made of plexiglass and has a fill hole on the top, which can obviously only be accessed if there's room above it to do so, or if you use a tube and funnel.

The Laing DDC pump is rated for around 50,000 hours if used at it's rated 12V power rating. This thing is a very quiet and efficient pump rated at 420L/hr, not an insignificant flow rate. Certainly it's far faster and quieter than the average AIO alternative. This little pump slots right into the reservoir with ease and has no problems with just a CPU load, and certainly wouldn't have issues should you decide to expand it's load.

To test just how well it can dissipate heat, we've hooked it up to the rather toasty Haswell E. It draws enough power to be slightly warmer than the Haswell K, and certainly much hotter than Skylake K is.

The test system is as follows:

The test I run to test heat is that of Einstein@home. As a distributed computing program, it's able to saturate all threads at 100% with some very complicated math. It's a good test of power output and stability as well. So, now on to the results, what you've been waiting for. 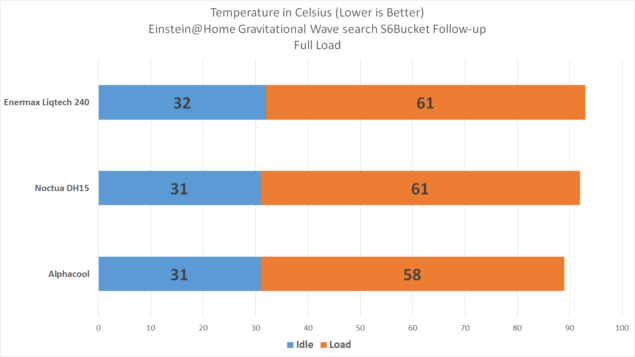 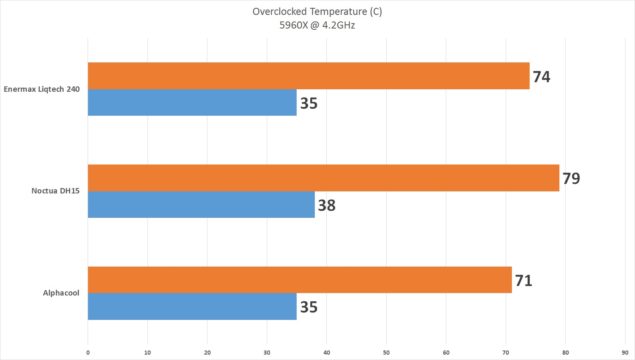 It may seem like the results aren't necessarily differentiated by much, and they aren't. But that isn't the whole story with a kit like this, nor the likely reason why you've purchased one either. It keeps things cool, and gives much more headroom for overclocking. 58C is still rather great for Haswell E, considering it's such a hot chip at times, even at stock. 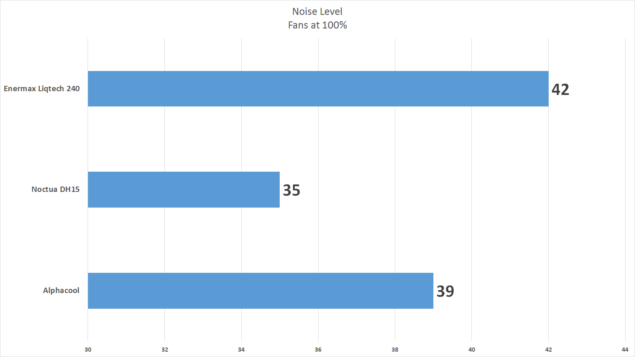 The clear surprise, or not, is that the Noctua DH15 is able to provide adequate cooling levels with very low noise levels. But the sheer efficiency and ability of the Alphacool systems is what is most amazing. the capacity sustain higher levels of heat is also an advantage over smaller volume AIO coolers and traditional air coolers. There's just simply more liquid and and more surface area within the radiator to dissipate that heat, letting you overclock a little more

The Alphacool NexXos 240 kit is an agile and very effective water cooling solution. The problem stems with most people wanting to put it together. It's not difficult, but another task in and of itself that might not be appealing. Thankfully it really is incredibly simple to put together and the benefits actually outweigh any perceived drawbacks. The expense, while certainly more than the typical CPU cooler, is made more worth it by the fact that it's actually going to last for a long time and likely be very effective at cooling future generations of CPU's with only a change in the adapter kit.

This kit is highly recommended for those looking for an ultimate AIO solution to cooling. It's not literally all integrated, but it's all curated and all the components work very well together.

A big thank you to Aquatuning.us for providing the test unit for this review.