In the not so distant future, humanity has been driven back from its excess of spirit and periods of insurmountable growth across the United States. With the threat of aliens wiping out civilization and humanity on its last legs, a decisive counterattack is all that keeps humanity from total annihilation. It’s a story that’s been told over and over again in various forms and Japanese developer OneorEight wanted to try their hand at spinning that tale. 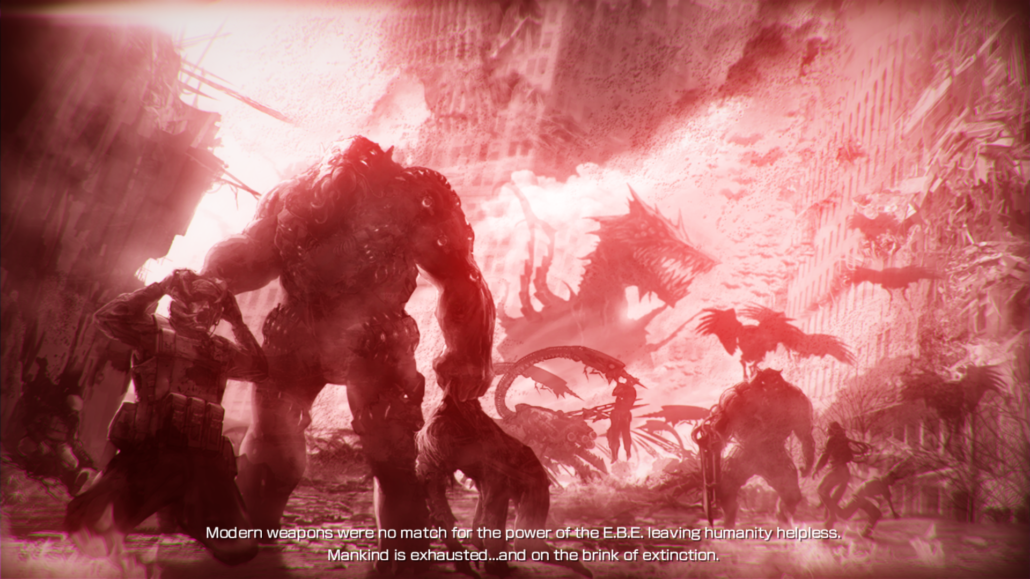 Telling a compelling narrative is not one of Earth’s Dawn’s strongest suits but with most action games, that’s usually secondary to the gameplay and setting. A rowdy crew that feels like a more ethnically diverse Coalition (of Gears of War infamy) is Earth’s last bastion of hope. The general gist of Earth’s Dawn’s story is that you’re a member of the counterattack that is all that keeps America from falling completely under alien control. To be honest, there isn’t much else that really needs to be told about that style of story and needless character development would only take more time away from the action.

Earth’s Dawn mission design is probably the greatest thing that I can praise the game on. In a way similar to Mercenary Kings, many of the side missions consist of either gathering specific collectibles or hunting down a specific foe. What helps to expedite the process is starting the player off typically right beside their intended objective. This is a small but mindful change, as running past the same scenery for the twentieth time tends to grow old, no matter how exciting the action could be. In a number of instances, the amount of time it took me to drop into a level, make my way to the intended objective and slay a group of foes could easily be clocked in at under a minute or two. When grinding out resources for equipment upgrades, that fraction of time certainly adds up compared to what a typical Monster Hunter mission would take. With around one hundred missions split up across just over half a dozen areas, being able to speed through missions in hopes of gathering up new crafting materials is a small but assured bonus. 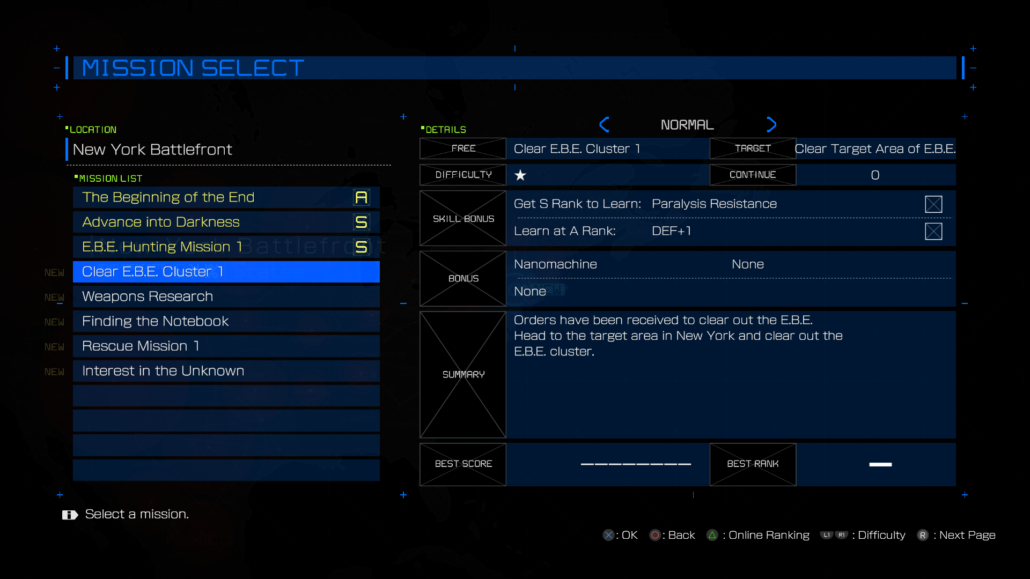 That crafting element to Earth’s Dawn is perhaps the biggest element that separates this indie title from other similar sidescrollers. Not limited to just upgradeable weapons, players can also craft armor (both functional and cosmetic varieties) as well as equippable goods that provide unique abilities when in %SPECIALMODE. The variety of materials match that of a Monster Hunter title, both in scope and rarity, although the in-game tooltips do a fine job of pinpointing just what manner of enemy must be slain repeatedly for enough pieces. Materials themselves can randomly be imbued with an elemental attribute and will be infused into the weapon when crafting, giving players easy access to a lightning affinity sword if they so choose. Leveling up weapons is another simple matter, where these same materials can be fed into a weapon for experience points that boost the gear’s effective stats. 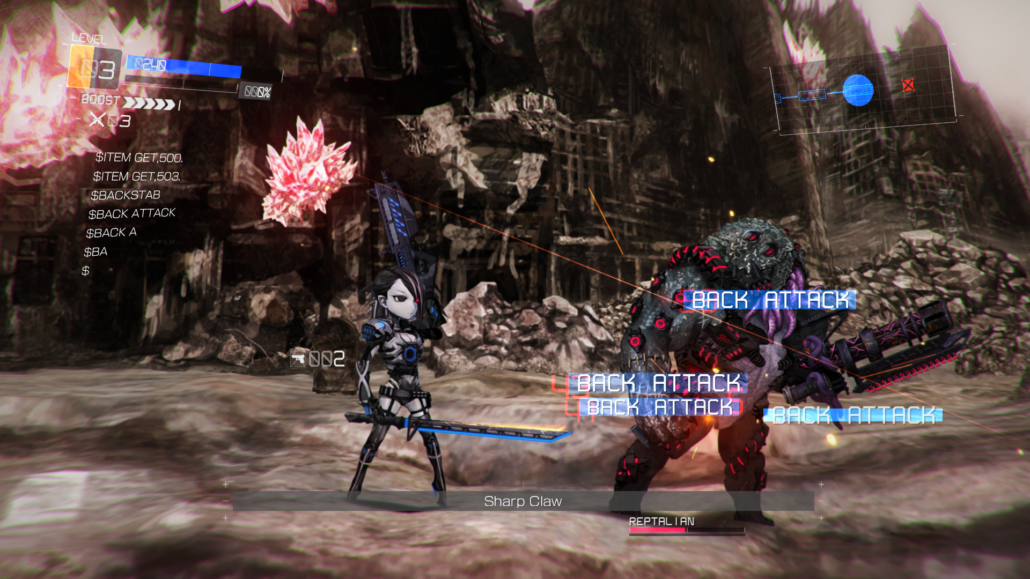 Early on, players are limited to a sword in one hand and a gun in the other. These are still customizable, of course, as I found myself cycling between an auto-targeting sniper rifle and a faster firing machine gun depending on whether the mission I was attending featured a high defense boss as its target. As the story progresses and the player unlocks more skills, different weapon varieties and combinations open themselves up for deeper customization. To further highlight the parallels with Gears of War, yes, chainsaws are part of the player’s arsenal.

By bringing gun and sword combat together, Earth’s Dawn keeps players up close and personal against enemy assailants while also giving them the freedom to pull back and fire away with heavier ordinances. Since guns have a better efficiency for taking out defensive shields, I typically fired a quick volley before dashing in with a quick sword combo and juggle the enemy around for as long as possible. 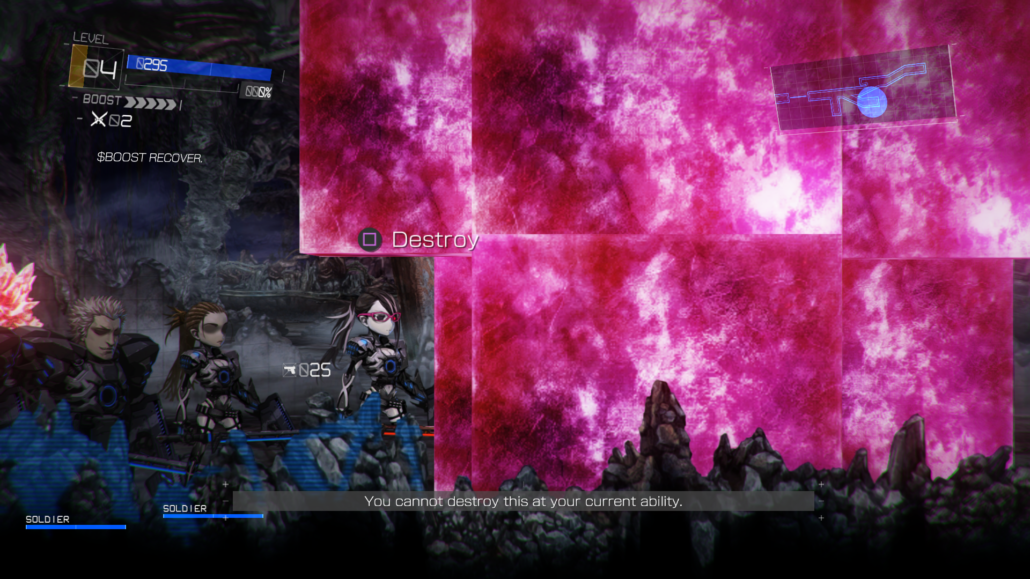 I kept approaching Earth’s Dawn combat with the same style and freedom of movement that I gave the recent Odin Sphere remaster. Too often, I’d want to cancel a sword combo with the boost ability and start up again, only to find that that freedom isn’t quite as complete as I wished. I felt somewhat constrained with the combos early on and there was a sort of weight commitment to my character’s swings. At the same time, whenever I used my gun without exhausting a complete magazine my character wouldn’t have the foresight to reload and replenish their ammunition. Only after firing into the air wildly and emptying the clip would my character begin the action of automatically reloading their left-hand weapon. Thankfully, ammo is an infinite resource and the only thing consumed was my time.

Earth’s Dawn has the genuine feel of being developed by people that have played other similar games in the genre and have established the groundwork for a successful action RPG. Unfortunately, their execution fails to hit the mark in a number of instances that quickly add up to work against it. Perhaps by drawing too much inspiration from the likes of Odin Sphere, Earth’s Dawn ran the risk of riding the success of the recent Leifthrasir instead of being celebrated as a unique infusion of genres.

Earth's Dawn ultimately ends up feeling too familiar to truly stand apart as a new classic, but it can still be a lot of fun.