It has come to our attention that this review was not conducted with the level of care and thoroughness that we demand from our reviewers. As such, the game has been re-reviewed; you can now use that article as our official review. We apologize for the inconvenience.

I should preface this review by admitting that I have never played a Dragon Quest game. As a result, Dragon Quest Builders is my first glimpse at the franchise so any potential references or Easter eggs from the previous games have most definitely gone straight over my head. As I’m unaware of the existing lore, my review will focus on DQB as a stand-alone game. Please also note that I have not finished the game due to the length of the main quest and the fact that I have only had it for a few days. This review will be spoiler-free.

You can’t look at Dragon Quest Builders without thinking of Minecraft. Its overall aesthetic and relatively similar crafting system make it difficult not to compare the two games. Therefore, with Minecraft setting the standard for freeform sandbox games and DQB partially falling into that genre, measuring one against the other is understandably the natural thing to do. On the surface, this is a somewhat acceptable comparison; however, once you dig a little deeper you’ll notice that DQB is quite different.

Set in Alefgard, Dragon Quest Builders examines an alternative ending to the original Dragon Quest game, where the hero’s final decision sealed their untimely death and tossed Alefgard straight into the hands of the evil Dragonlord. The land is now pretty desolate, heaving with monsters and littered with ruins. The remaining inhabitants appear to have forgotten how to build and craft things over time and are in dire need of help. Awoken by a spirit, you (a creatively gifted builder) are called upon to rebuild the world and defeat Dragonlord, starting in an area known as Cantlin. Luckily, you are not alone for long. Friendly NPCs are strewn across neighboring islands and as you rebuild your base, more will want to join you.

Dragon Quest Builders has a story and it’s actually pretty interesting. It offers aspects that Minecraft (ignoring Story Mode) is lacking: structure and purpose. In Minecraft you may build a base, seek out the rarest ores and craft the best items, but you’re never actively encouraged to do those things. Minecraft enables you to create whatever you want, whenever you want and doesn’t impose many restrictions. DQB, on the other hand, greatly restricts the player. Now, I’m not saying that this is necessarily a bad thing, but it can be quite frustrating at times. Landing in a world that largely resembles a broken, blank canvas and being told that I have this unique creative power made me feel rather entitled. Fresh out of the tutorial, I set out to explore my surroundings and soon learnt that I was on a small island with no means of travelling elsewhere. These kinds of niggles continued as I progressed through the next few hours of the game.

As DQB fits into the sandbox action role-playing genre, you have the option to be creative when constructing your base. If you’re like me, you’ll want to keep improving it as you unlock the ability to craft and utilize better materials. Meanwhile, you will also be encouraged to complete quests which in turn, enable you to unlock more recipes and raw materials.  This is an incredibly slow process. If you’re dead set on just following the main quest, DQB will take at least fifty hours to finish. That’s a substantial amount of time for anyone to invest in a game, not to mention the one hundred hours plus that it will take completionists. As I mentioned earlier, some quests feel very slow and for some players this could be a real problem. 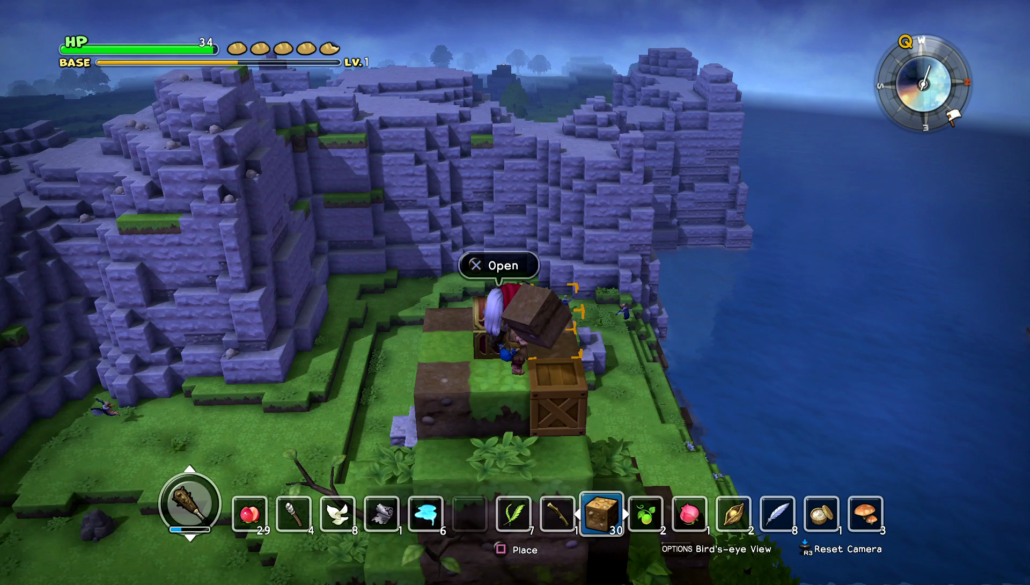 Dragon Quest Builders definitely succeeds in consistently providing you with an objective to achieve, yet it hinders your progress as you try to reach it. The first roadblock appears in the tutorial where you are introduced to the controls. Anyone that owns a DualShock 4 will be aware that it has plenty of buttons. However, in DQB three different actions have been assigned to ‘X’, rendering some of the other buttons entirely useless. This can be particularly inconvenient when you are trying to build something when an NPC is close by. Placing blocks may also prove to be quite irritating for some players, and again, I blame the controls for this. There is no way to rotate objects when placing them and despite Square Enix’s attempt to support players wanting to place blocks at speed, it still isn’t accurate enough. Sure, you can use R1 and L1 to place or break something one block higher or lower than the previous block, but I still found that blocks and items would often end up in the wrong spot.

Unfortunately, I felt that I wasted a lot of my time trying to reach the various locations that were important in the main quest. Main quests are highlighted on your compass. This seems straightforward enough until you walk so far in that direction that you’re confronted with the water surrounding the island. The bird’s eye view isn’t exactly helpful either as it merely shows you where you are currently standing with a ‘Q’ and a small arrow to remind you which way you should be heading. If you’re not sure where you are supposed to be going navigating around the islands can be incredibly frustrating. Although the addition of being able to teleport between islands is pretty neat, the ‘Q’ on your map will not inform you which island you need to travel to first. Players should be prepared to spend a significant amount of time ambling around and luckily, there are a few benefits to doing this. For one thing, you’ll need food. So far, my character has been sustaining herself on Plumberries, fried eggs and Shrooms-on-a-stick. Similarly to Minecraft, players will have to cook some food but you’re instructed to build a Cookfire at your base early on in the game, so this isn’t much of an issue. Likewise, some materials can be crafted straight from raw, whereas others will need to be processed in a Forge before they can be used to craft other items. 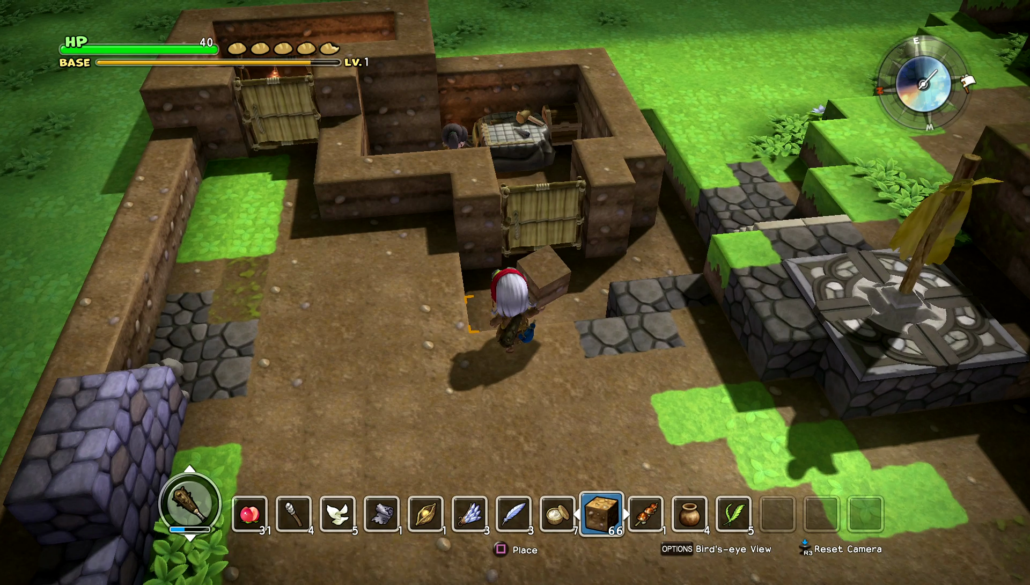 Furthermore, the nature of the game, cute style and incredibly calming music makes Dragon Quest Builders very relaxing to play (even if the musical transitions aren’t exactly smooth). You’re encouraged to do quests, but you won’t be frequently pestered to complete them unless you go back and try to talk to the NPC again. One awesome feature of DQB is that the writers have a great sense of humor and this is often reflected in the dialogue between your character and the NPCs. Watching my character fall asleep while being told how to use the controls and hearing the spirit’s reaction was a nice addition that kept me engaged. Later dialogue also proves to be just as fun and light-hearted. On the subject of the DQB’s relaxed feel, the combat also appears to be very mild. With a similar level of difficulty to Minecraft, common monsters are easy to tackle, especially once you have crafted a sword. Nonetheless, DQB fleshes this out further by including larger monsters that orchestrate more of a ‘loose’ boss fight (by ‘loose’, I mean that you can run away whenever you want without any repercussions). Although, if you die, the game appears to be extremely forgiving. Falling into the sea merely strips away a small portion of your health and dying during a monster raid on your base just means that you’ll have to restart the fight. Players will be given a fair amount of warning before a fight in order to prepare and in most cases, you can postpone these encounters until you are ready for them.

I experienced a number of conflicting emotions whilst playing Dragon Quest Builders. There were stretches where I felt relaxed and able to enjoy the leisurely pace that I set for myself and other times where I felt bored with little motivation to continue. I am sure that Dragon Quest fans will appreciate the game far more than I do and I also believe that many players that are unfamiliar with the franchise will equally be able to enjoy the quests and crafting that this game offers. However, for other players, the restrictive nature of the game locking away the majority of recipes at the beginning may not sit well. The sheer length of the game may also be a factor that deters more casual players from picking up this title.

Creating an alternative ending to the first Dragon Quest game, Dragon Quest Builders incorporates sandbox elements with the series’ RPG roots to encourage players to be more creative. For those that are looking for a relaxing game that can be completed at a leisurely pace, this may suit you. Although the game presents more of a structured approach that many players may find preferable to a game like Minecraft, Dragon Quest Builders has a number of flaws that appear to hinder the player. As a result, the game can feel quite drawn-out and boring at times which may prevent players from wanting to stick with it until the end. Nonetheless, it will be very interesting to see what Dragon Quest fans make of it.