Dr. Mario was never actually that good. Let's be honest, let's be frank, it was a mediocre puzzle game that had Mario shoehorned into it because that's the only way it was ever going to sell units. Less interesting than Tetris while being infinitely more frustrating, there's a reason why the Dr. Mario franchise has been pretty quiet since the original. I mean, sure, there's been a handful of spin-offs like Dr. Luigi, Dr. Mario: Miracle Cure, but they're not really worth talking about. In fact, the best thing Dr. Mario has done in years is getting a down-air spike in Super Smash Bros. Ultimate.

When Dr. Mario World was announced, I had a mix of tentative excitement and fear. After all, this was either going to be good or a horrific nightmare. Let's cut through the nonsense - the reality is closer to the latter. I'm not saying playing Dr. Mario World is some sort of existential nightmare, but you'll likely wish you were doing something else.

What we have here is a match-three color game, a bit like Candy Crush, only you slide capsules onto a grid in order to destroy colored viruses. Cluster them together as much as you want, but the viruses will only be destroyed if you manage to have three of the same color virus or capsule in any given row or column. It is a pretty standard mobile game experience in that sense - easy to learn, slightly less easy to master, but not tough in any sense.

Playing the game is fine. There are dozens upon dozens of stages to play through, each with their own unique challenge. Things start off incredibly easy, and quickly ramp up once iced-over viruses and other elements are involved. That means things get difficult, but in this game, challenge somehow doesn't feel good. I know how stupid that sounds, but hear me out. Unlike in other games where failing a stage and jumping back in is fine (for example, Super Mario Maker 2) in Dr. Mario World, it feels like a punishment. Failing a stage loses you heart energy which you need to enter the stage in the first place, and since you can only have five hearts at a time, a single difficult stage can possibly eat through all of your energy. If you want to continue playing without energy, you can jump into the okay-but-not-great online versus mode.

This is, of course, a mobile game monetization tactic. Once you lose energy, you can either convince your Facebook friends to join the game and donate energy to you, or pay real money for energy yourself, and I've seen no methods to claim premium currency without real money investment. Energy regenerates naturally, but only after half an hour. That means for a full bar of five energy again, you'll be waiting over two hours, and you can easily burn through it in five minutes. Very, very trying.

Then, you've got gacha mechanics. There's not many, but there are main characters and side characters to earn in the in-game gacha mechanic, allowing you small bonuses in stages. You'll need to earn a lot of the in-game currency in order to buy a new character, or, of course, you can use the premium currency. Ah, see, that's how they get you. Unlike gacha mechanics in many mobile games though, getting a good pull is not satisfying, as it doesn't really change anything. It's not like characters have incredible strength, and they're unlikely to impact the tide of your puzzle solving.

There are also special, more difficult, stages in each world which are often timed. Timed stages suck. Really, really bad. It just feels like another way for the game to push you towards using items and spending in-game currency to extend the amount of time you can play each stage for. It's borderline insulting how transparent it is.

But the monetization would be forgivable if the game was fun at its core, and it's just not. This is not a fun game. It's frustrating, annoying, enraging, and everything funnels the player towards microtransactions after less than an hour of gameplay. Dropping capsules into the grid doesn't even always work right, and I often found capsules just dropping into the wrong places, partially because my fat finger was covering the screen and I couldn't accurately see what was happening, partially because the game just controls awfully.

There's an element of skill to it all. When pieces of capsules have nothing connecting and nothing underneath them, they drop, and during that time you can relocate them. Using this you can easily clear viruses on opposite sides of the grid using a single capsule. Still doesn't make the game fun, though. Yeah, sure, it's momentarily satisfying, but it's just not enough.

I'm going to stop this here because it's turning into a rant. Dr. Mario World is by far the worst Nintendo licensed game to land on mobile, and if nothing else, I hope it teaches them to not plague the platform with another generic, transparently money-hungry game again. This is the most insulting thing to touch the Mario brand since Mario's Time Machine, and when it comes so soon after the incredible Super Mario Maker 2, it just feels like a complete mistake.

You can download Dr. Mario World from Google Play or App Store. 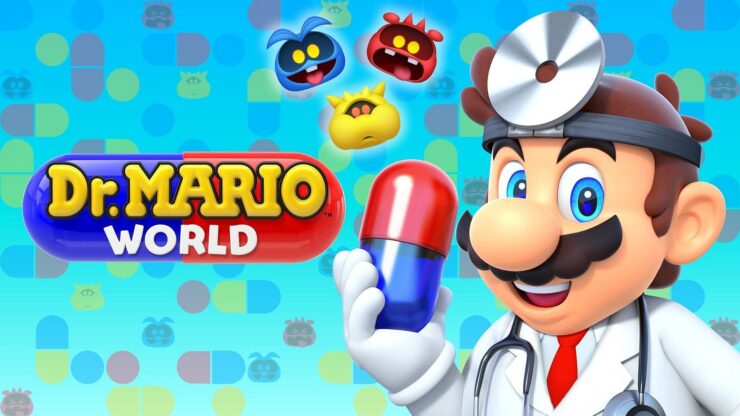 Dr. Mario World wants your money, and it really doesn't care if you have fun while it tries to pry your wallet open, and that really is the biggest damnation I can give to a mobile game. Don't bother downloading this, it's not even worth your time as a free curiosity. A massive disappointment, and one of the worst Nintendo licensed games I have ever played.