Like a phoenix rising from the ashes, Pentavision has returned from development hell to bring fans one last hurrah for a rhythm series that has endured since the days of the PlayStation Portable. DJ Max Portable, while in a similar mold as that of Konami’s Beatmania series, has retained its own identity as a masterclass rhythm series filled with a diverse range of Korean club hits across a wide range of musical genres. While Pentavision themselves may no longer exist, the studio has reformed into Neowiz and brought the band back together for a lasting tribute to the dozen-plus years of DJ Max. In a fitting name of tribute for the first PS4 release of the DJ Max series, DJMax Respect celebrates those years when Korean rhythm games were able to gain a foothold in an ever-growing Japanese arcade market. 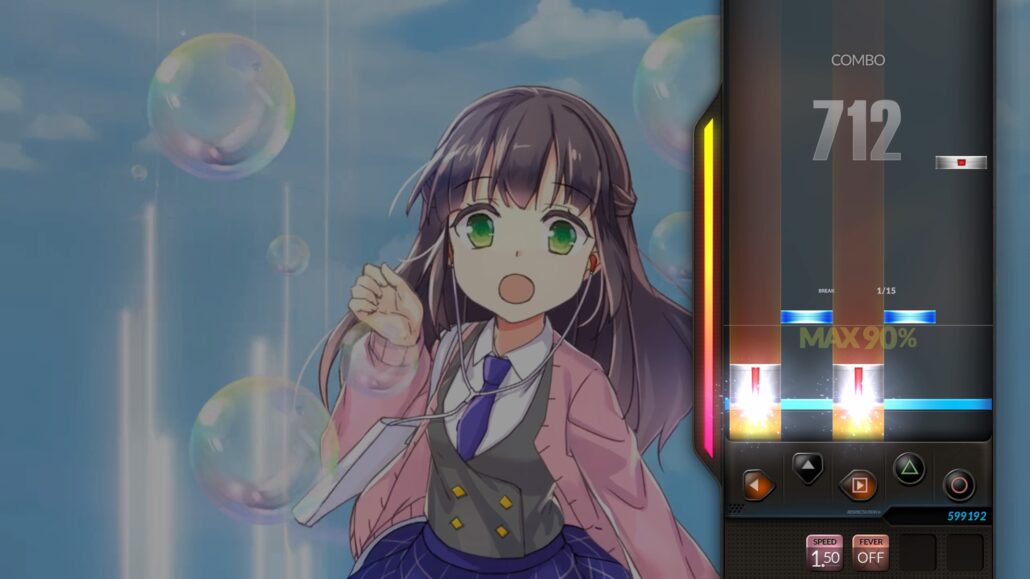 DJMax Respect and its previous mainline brethren follow a similar gameplay trend as BEMANI’s Beatmania series. Notes fall down a vertical track representing anywhere from four to seven buttons on the controller and each note is ripped directly out of the music, giving you much better audio feedback than just drumming along with the beat (ala Taiko Drum Master). When you can match the tempo and maintain a perfect combo, DJMax Respect feels like you’re actually playing the song, but the exact opposite is also true if you can’t keep up a rhythm. Continuously mistiming notes or hitting the wrong key will quickly turn what was once a beautiful melody into an audio salad that can keep throwing you off your timing.

Contrary to many other rhythm games that eventually make their way onto a console, DJMax Respect, and the rest of the series in general features an ever-increasing skill ceiling that can deliver a challenge to players of all skill levels. Whether you can master songs with four-button variants all the way up to eight-button layouts, the song roster demands the player’s respect. Each note track brings their own challenge to the rhythm experience and even if you’re a newcomer that has never touched a controller before, both the four- and five-button modes can provide a sufficient introduction while still providing the challenge that the player can grow into. Some of the upgrades that players might be familiar with, such as equippable shields that prevent a set number of combo breaks per song, are conspicuously absent from the options for reasons I suspect are tied to the online multiplayer mode. 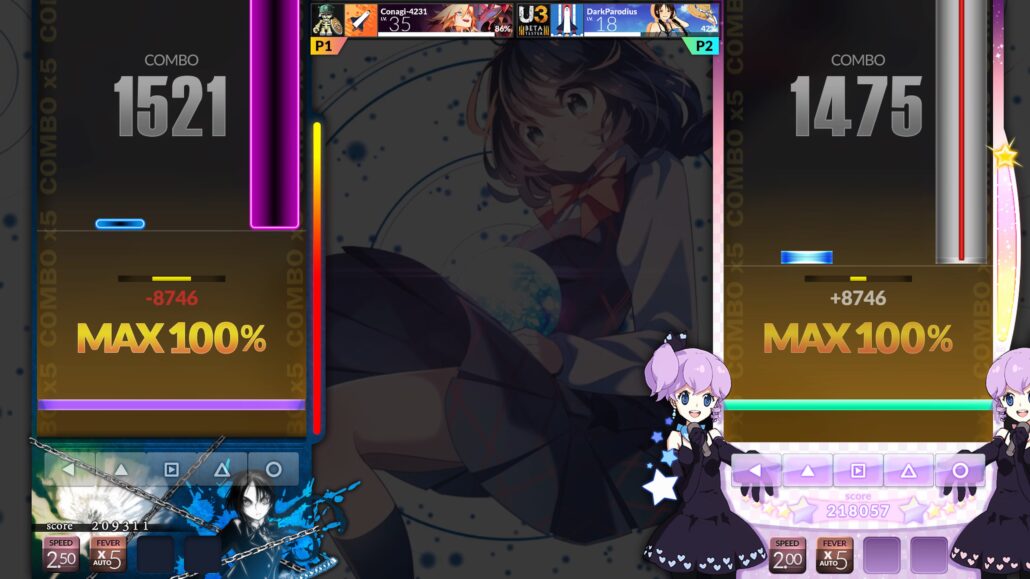 DJMax Respect pays tribute to the lengthy history of the series by building together a roster of all-time greatest hits from the titles that came before in addition to a large number of all-new songs to tap along to. Clazziquai and Technika Tune’s song lists were conspicuously absent at the launch of DJMax Respect, but a set of new DLC packs bring back a large number of those tracks I fell in love with so many years ago. A great number of the licensed tracks (KARA’s Jumping among those I miss the most) weren’t able to return from the dead, but Pentavision was still able to pay their respects with a collection of Korean tracks that range from somber piano melodies to bass-thumping club hits that you can blast in your car. Most of the vocal tracks are sung in native Korean or laughably awkward Engrish, but they give the series a bit of charm that helps separate it from the growing number of Japanese-only rhythm titles on the market.

Despite the DJMax series traditionally being built for PlayStation consoles in most instances, DJMax Respect is a title that I wish had a matching controller to use. Once the six-button mode comes into play, I found my thumbs having to contort into awkward positions in order to hit multiple buttons at the same time. For as nice as the DualShock 4 is to hold, trying to hit Up and Right simultaneously on the D-pad in the midst of a track requires an awkward touch that can throw off one’s rhythm if you aren’t expecting it. If only there were some sort of comfortable DJ pad to work with for this PS4-exclusive. 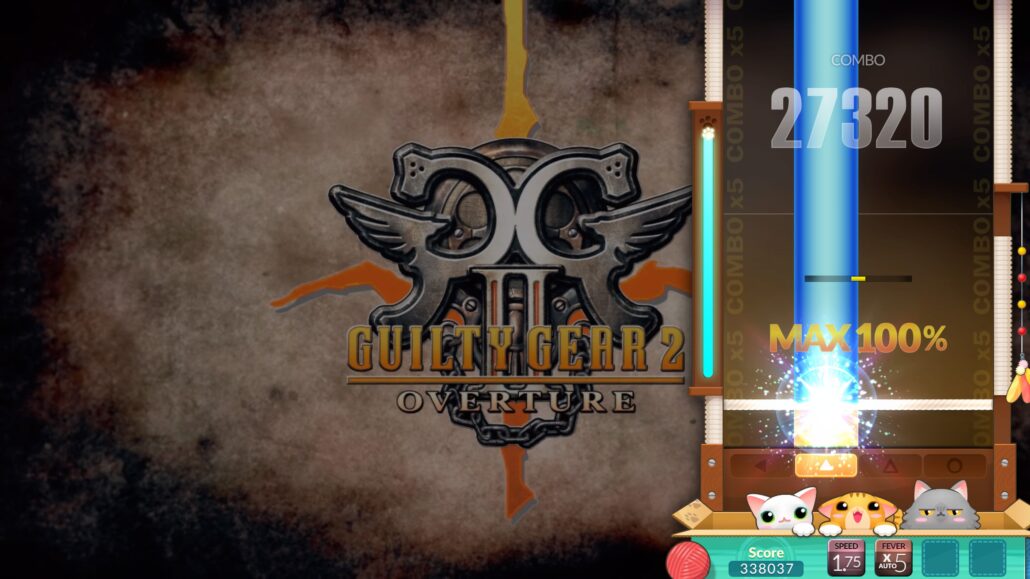 The presentation to DJMax Respect stays close to the series’ roots, eschewing grandiose design for simple music videos that you’ll likely not pay much attention to as you’ll be too immersed in trying to achieve a Full Combo. Hitting every note in style will typically unlock these music videos, so it’s worth going back into the gallery to check out the fantastic minute-long stories that accompany each song. Player customization is fairly basic in DJMax Respect, as with most other rhythm games, giving players the options to change note skins and the note track itself, as well as the calling card they can bring online into online multiplayer. 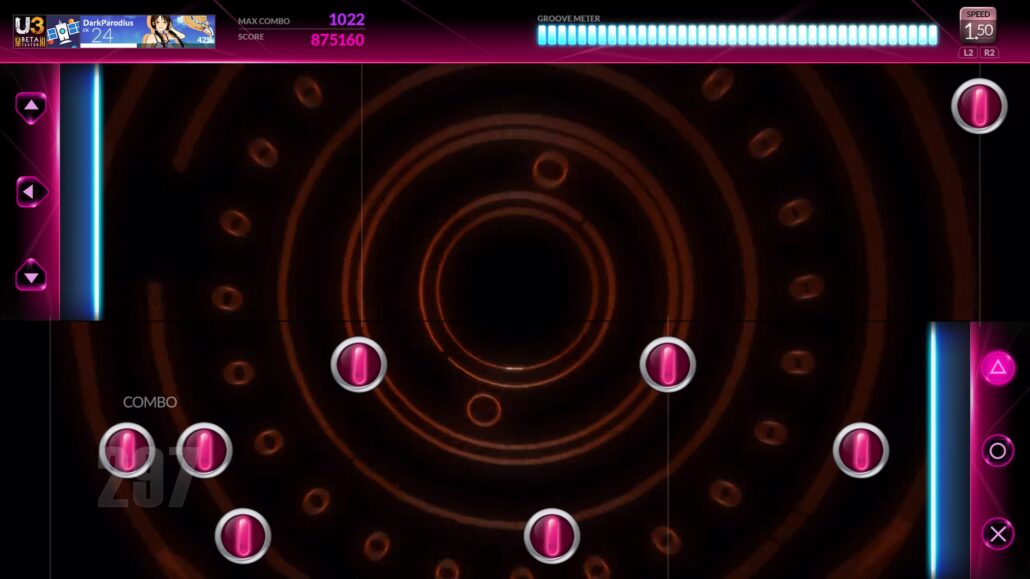 Being able to play DJMax Respect online is a rarity for most rhythm games on consoles these days and is something that I am absolutely grateful is included with the PS4 release. The competitive mode is limited to competing scores (difficulty and note modes can be freely chosen) with no sort of silly powerups or abilities to throw the other player off their rhythm. Lobbies are barebones with being unable to hop in during the middle of a song, but they do something that I haven’t found in any other multiplayer game before. If either player has access to DLC songs, that player can choose it for their round pick without fear of blocking the other player from being able to join in. Since all new DLC tracks are downloaded in the standard software updates, there are no compatibility or catalog packs to grab off the PSN Store to create parity between players. Because I was able to sample some of the tracks that I didn’t own, the first thing I did after a long two-hour multiplayer session with someone was to download the Technika DLC pack to add Son of Sun back into my music library.

Nothing short of a fitting send-off for the rhythm game series, DJMax Respect pays tribute to the lasting legacy of this Korean gem. The number of songs you get in this package are staggering and are a crazy value, even without taking into account a large variety of DLC tracks from other titles in the series. By bringing a multiplayer mode that lets you sample other tracks, DJMax Respect should be a great rhythm title to experience with friends.

Review code provided by the publisher. You may purchase the game via Amazon.

With a high spike in difficulty that demands respect and practice to scale over, DJMax Respect is a journey that will take you through the last dozen years of Korean rhythm games with a roster of many of the series' greatest hits.