When Deus Ex first released in the 1990’s it caught the attention of many gamers worldwide, being part of the RPGFPS genre it was a rare genre of its time and it still is today, very few companies can even do RPGFPS very well with Borderlands being one of them, While Deus Ex 2 was a bit of a disappointment to the fans of the series Square Enix and Eidos Montreal have worked together to show that a game can still live up to the standards set by a game over a decade old.

There are a variety of ways to play the game, you can choose to be a complete stealth machine (You can literally be invisible) to avoid detection and casualties and go straight for the objective while also focusing on getting out alive undetected. Or if you are a bigger daredevil you can choose to go loud and use takedowns on any enemy you please, you can even choose to throw in a little of the both together or even something completely new! If you think of a way to completing a mission or a specific objective there is a very good probability that it is possible in the game itself. The game is very open to your decisions and your actions will influence your ending depending on your playstyle.

When you are not doing story missions you can choose to take on optional side missions which let you fall deeper into the story of the Deus Ex with the reward being in many forms including information, money or weapons; they all help get the player immersed in the world around them giving them a more authentic feel of the game, and if you are not the one for story you can always go around performing Silent / Lethal Takedowns on civilians in your spare time.

The only tricky part is getting the right mix of augmentations, while I did say the game play is versatile the game punishes you at times for NOT being diversely augmented, the boss fights in this are sadly run and gun style and if you have been focusing on stealth and such you will have a hard time taking him down or during a side mission if you have to hack a terminal or a computer you probably won't be able to do so since you spent all your points upgrading your other augmentations forcing you to either quit the mission and try for another day or completely skip the mission if you don't have the patience, this is another weak point of the game for those of you who will start your first play through and will run into these difficulties and once you start your second playthrough you should adapt a different play style for a different ending.

The game can be unforgiving at times especially when you try your hardest to be the stealthiest you can be, the smallest thing can alert the enemies and expose you, this is where the game can prove challenging for those of you who were hoping to do a Solid Snake past the whole game. With a proper mix of Solid Snake meets James Bond you can definitely find the right mix needed for the most efficient experience.

Deus Ex Human Revolution shows us the world in the not so distant future where humans are getting cybernetic implants called “Augmentations” which while help the physically handicapped and even the opposite, while this sounds great and all the process can have serious repercussions, people who get these Augmentations done on them sign a deal with the devil because they have to buy a special drug called “Neuropozyne “ regularly otherwise their body will start rejecting their augmentations and this could ultimately kill them. Humans do the obvious and revolt against Sarif Industries and their unethical practices and look down upon people with these augmentations because these “augmented humans” are more machine than they are human.

Your choices and actions control virtually everything around you, after completing a mission you can see the results of hard work in a news paper and see whether you are a hero or a menace to the people. Very few games do this very well but Deus Ex does it pretty well, whether you let hostages die or saved them will be published in newspapers within minutes and this really helps in giving Adam Jensen a better identity in the world around him as you control him.

Without giving too many spoilers I can tell you the basics:

You play as Adam Jensen a man turned human to augmented super soldier against his will after being left for dead by people breaking into the company; he is turned into an augmented human against his will and is determined to find the people who did this to him.  The game takes you to a variety of locations and different settings so there is always something new happening in the game, Along the way you can earn points to buy better augmentations such as better social skills to avoid sticky hostage situations or be a better hacker to find out more about the owner of a computer so that you can get a deeper feel into the story line and the people in it, like any other RPG you can make decisions regarding anything but there are certain decisions which the game makes for you anyway. Your decisions can impact a person(s) life or death; it can determine your ending and many other factors such as your allies and foes.

The sound and visual quality of the game is stunning, the city is pretty dark and gives the feel of a modern remake of Blade Runner which is very well made, the sound design of the game is also great with voice acting but the bad voice acting is fairly visible,  From my personal experience I found the voice acting to be okay but other times I found the voice acting just not suiting the situation or the character saying that particular dialogue or they were not saying it the way it was meant to be said. (You will understand this better when you play the game)

Square Enix is well known for their work in the Final Fantasy games but when I saw the cut scenes in the game I just knew that Square can NOT disappoint me considering how beautiful the FMV sequences in Final Fantasy games have always made my jaw drop to the ground over the amazing visual beauty on my screen despite the game being on a PlayStation 1 or a PlayStation 2 and more recently with Final Fantasy XIII. Square Enix has done an AMAZING job with the visuals and anyone who plays Final Fantasy games should know this to be a fact, the movie sequences of this game are stunning and breathtaking at times and just like their other games the player can forget this is even a game anymore if they weren’t holding a controller or a Keyboard and mouse in their hands.

Screenshots: (You can right click and view the images in 1920x1080 by opening them in a new tab) 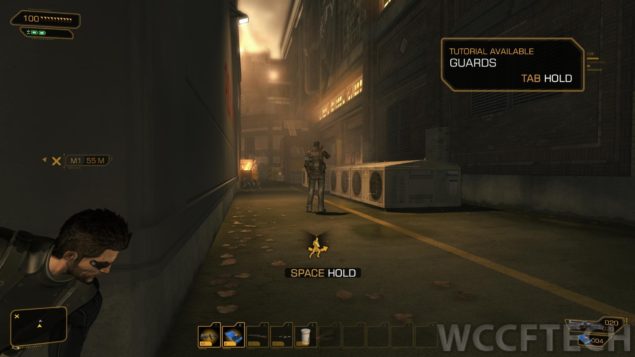 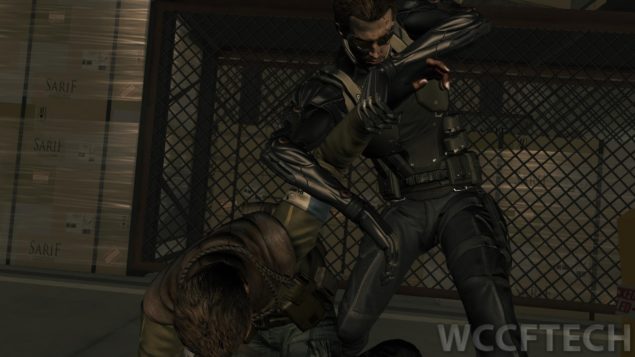 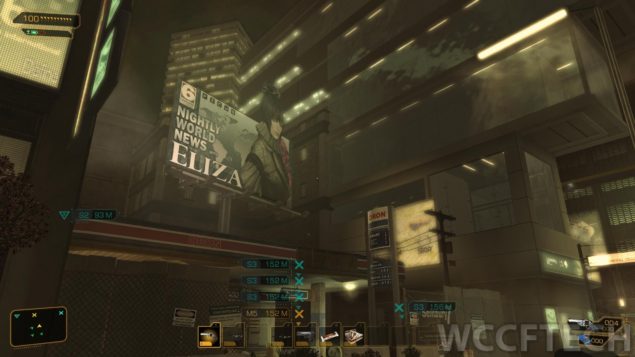 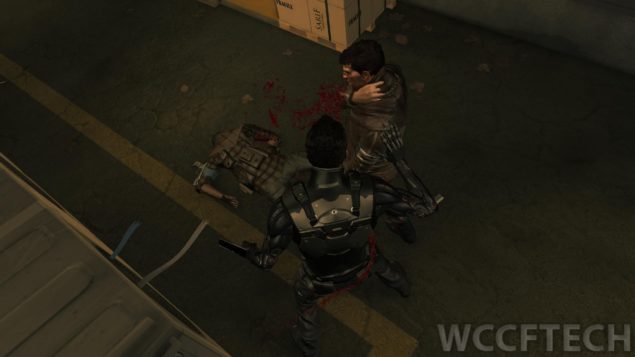 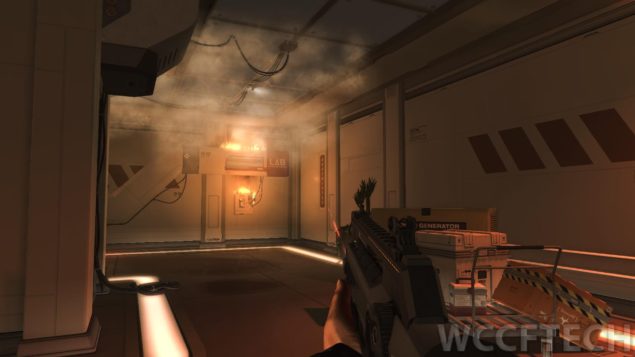 You can view these and many more screenshots by going HERE

While achievements and trophies are common in most games of today I have to say that Deus Ex Is certainly a challenging game and definitely rewards players achievements for doing what many games do very rarely, giving the player a great feeling once they earn a certain achievement, One achievement for example is beating the game WITHOUT harming anyone except for bosses or completing the game without setting off a single alarm, these are some truly challenging achievements and while many achievement / trophy hunters will find these annoying I find that many games should follow this trend instead of adding ridiculous achievements / trophies such as “Reach rank 50 in Multiplayer” to expand a games life, Deus Ex makes a bold statement and uses achievements properly so that the game doesn’t hand them out to you like free candy. You have to actually work hard for your reward and ultimately get the feel which only a few percentage of the players  will feel, Ask the people who have platinums in Demons Souls how THEY felt when they saw the platinum trophy pop up on their screen.

My only complaint with the game is other than the bad dialogue at times would be the LONG load times, you would think a game like this wouldn't have such long load times even on the PC version but you would be really surprised, Whether you are playing this on the PC / PS3 / XBOX 360 and whether the game is installed or not on the consoles doesn't make much of a difference, the load times are a huge pain especially when you die, the only other time I have seen such long load times was in Duke Nukem: Forever but once you get used to the lengthy load times the game is an unforgettable experience

Deus Ex: Human Revolution just goes to show us that despite a game not being made as frequent as most other games in the FPS / RPG or RPGFPS genre that there really are certain games out there that can still live up if not exceed the expectations of their predecessors whether their games are a decade old or even 25 years old, Deus Ex: Human Revolution lives up and at times surpasses the original in many places and I am seriously hoping for a future game with the same team working together. Once you get past the somewhat bad dialogue in the game and the lengthy load times on whatever platform you own it on you will definitely have a blast (I put a small note for the PC owners below) .

I would like to add that the load times have been fixed on the PC with an update which help decease the load times to a huge extent, some people are reporting the load times decreasing to as low as 10 seconds from the previous load time of 40 seconds.

Deus Ex is out right now and should not be missed by fans of the RPGFPS genre, the game is available on Steam, PlayStation 3 and XBOX 360 right now and is one for the books; let’s keep our fingers crossed for another Deus Ex game to be announced in the near future.