Destiny and I have always been on strange terms as friends. Every once in awhile, I’ll heed the call of duty and come back to my role as a guardian every so often, although the urge hasn’t gripped me like it used to. It’s been nearly a year since my Awoken Warlock was once a formidable adversary in the Crucible as well as one that would routinely scout through the Court of Oryx in search of relics and loot. I had lamentably skipped over the Rise of Iron expansion, yet despite that extended break from The Traveler, I still found Destiny 2 to be familiar in so many ways.

The opening act to Destiny 2 should be instantly recognizable to anyone that’s played through the beta or read my hands-on from E3 2017. This first mission introduces players to the might of the Red Legion and shows what fate befalls the last city on Earth. It was a fine chance to reconnect with some old friends and pick up a gun once again, but those good times were only fleeting. The Red Legion, a faction of the Cabal hell-bent on destroying The Traveler and utilizing the Sun’s energy for a giant space cannon feel right at place in science fiction tales and provide Destiny 2 with a story and motivation that go far above and beyond its predecessor’s works.

It isn’t long before my Guardian is stripped of the Traveler’s light and left to die on the Earth’s landscapes. No ghost, no sparrow, not even a gun to defend himself. This slow opening does a wonderful job immersing the player into the desolation of the world left behind after the Red Legion came and is notably accompanied by one of the single best orchestral pieces in the entire soundtrack. Bungie’s efforts to have Destiny 2 open with such a somber beginning really nails drive forth the premise that hope is but a fleeting memory in the world of Destiny 2 and the Light that once filled Guardians and their Ghosts with a magical energy that can bring them back from the dead is all but lost, leaving the Guardians of Earth and the surrounding galaxy with one life left to live.

When you can finally get a gun and defend yourself against the beasts patrolling the Earth’s landscape, players are introduced to The Farm, Destiny 2’s primary social hub instead of the last city. From there, Destiny 2 showcases the usual trappings that players should recognize from the first game. Your trio of Guardian leaders, CAYDE-6, Zavala, and Ikora each confer missions upon the player early on and act as the backbone linking Destiny 2’s story together.

For much of Destiny 2’s story, players are focused on traveling across the galaxy and getting the band back together,’ per say. Those three Guardians that once served as mentors and loot-bearers within The Tower from the first Destiny title have been scattered across the galaxy and presumed dead. Naturally, it’s up to the only Guardian that still lives within The Traveler’s light to bring them back together in order to fend off the Red Legion and save the galaxy once more. Destiny 2’s story jumps about from planet to planet, only lasting a few missions in each place before jetting off to another, giving players a grand tour of the galaxy and a set of new environments completely separate from the previous game’s locales.

Each of Destiny 2’s planets feel separate from one another and there’s going to be a lot of treading ground as players seek out the various activities beyond just the story missions. Since Destiny 2 aims to be as much of a social experience as the previous title, just about every activity can be tackled either solo or with friends, or even complete strangers with the public quests that crop up on set intervals. Having a proper map system around this time helps to track these various events and also illuminates some of the hidden treasure chests to hunt down.

Bungie’s signature level design is on full display for Destiny 2. Environments that players traverse through in the open world are routinely present in Destiny 2’s lengthy campaign and features a fine mixture of open-world encounters, platforming puzzles, and of course, the obligatory vehicle segment as part of the story’s climax. There’s no better moment in the story than stealing a heavy Goliath tank and bringing the pain to the Red Legion, all the while having CAYDE-6 chatter over the comms begging for one of his own. After finishing the main campaign of Destiny 2, that’s when the adventure truly opens up with a plethora of new activities opening up to the player. Planets that might have been stripped of their campaign missions still have plenty of side activities hidden about that can be unlocked as the player increases their power level and aids the various citizens around the galaxy. Entire new missions types, such as Patrols and Meditations give players randomly generated missions on the open worlds or revisiting old story missions, respectively.

To hit that elusive power level cap (no longer referred to as Light) of 350, players are going to need to grab a few friends and tackle these missions in seek of legendary and exotic engrams. Due to how the itemization has changed (for the better) in Destiny 2, nigh anything the player picks up has the potential to be an upgrade. Loot is based upon the player’s potential Power Level and gear in their inventory, so you won’t have to put on your highest level gear anytime you’re decrypting engrams. Also, weapons have been completely reconfigured to move away from the Primary/Special categories (Heavy weapons still exist and also include Sniper Rifles and Fusion Rifles) into Kinetic and Energy Weapons. The former simply do raw damage, while Energy Weapons do one of the three main elements in terms of damage. With this change, weapons of all types can be included in your first two slots of weapons, and if you want to be the Hunter that runs around with two hand cannons in PVP, that’s on you.

Weapons also no longer require leveling, with all of their perks and upgrades available from the start, although to infuse a weapon, you’re going to need to feed in another item of that same class, hand cannons for hand cannons, helmets for helmet etc. Additional mods can also be slotted into these gear and once you’re up to the level for doing strikes and raids, you’re going to need to invest in some legendary mods that boost that particular item’s power/defense to get your stats up to the soft cap of 280 (the recommended power level for the newly unlocked Leviathan Raid).

If you've played through the group raids of the first Destiny, or even MMOs like World of Warcraft and Final Fantasy XIV, a similar experience can be found for players that want to experience a challenge unlike anything else in Destiny 2. Set upon a Cabal ship known as the Leviathan, the first raid for Destiny 2 is expansive with an entire secret area set upon the underbelly of the ship and mechanics to each boss encounter that goes above and beyond anything else in the guardian's adventure. Each of the raid bosses in the Leviathan Raid features a different set of mechanics and range anywhere from a Japanese game show to a stealth mission with two guardians guiding a team of four through a misty valley of roaming Cabal war hounds.

After nearly ten hours this weekend, I nearly completed the Leviathan Raid, save for the final boss encounter not due to a lack of effort but rather some mechanics that our fireteam kept getting stuck on during the latter phases. I'm a bit shocked that Bungie decided to bring such a mechanically-dense raid as the first major activity for the new Guided Games feature and will pray for the groups that attempt the Pleasure Gardens for the first time.

Yes, Destiny 2 does offer microtransactions in the form of Eververse’s Bright Engrams that can provide exclusive ships and sparrows, dance emotes, and other cosmetic goods. The bright side to this is that after the player reaches 20, every subsequent level of EXP also provides a Bright Engram. In about a week, I had already earned close to a dozen Bright Engrams for free, giving a number of dances and emotes that I didn’t have to spend a penny on. Now if only I could find that ramen eating emote I saw someone use in The Crucible…

So many of the cryptic and strange mechanics from the first adventure have been streamlined in Destiny 2, giving both new and returning players a fresh experience within The Traveler’s light. The gunplay is still among some of Bungie’s best, and while I might not be as strong a contender in The Crucible as I was in the first game, I still came away from each match either praising my team for their teamwork or making a list of the exotic weapons that kept killing me over and over and giving myself a goal of new weapons to seek out. While only a Legendary auto rifle, the Origin Story was top on that list until I got one for myself and there’s a very good reason so many people use it in competitive PVP for that damage boost on sequential kills. 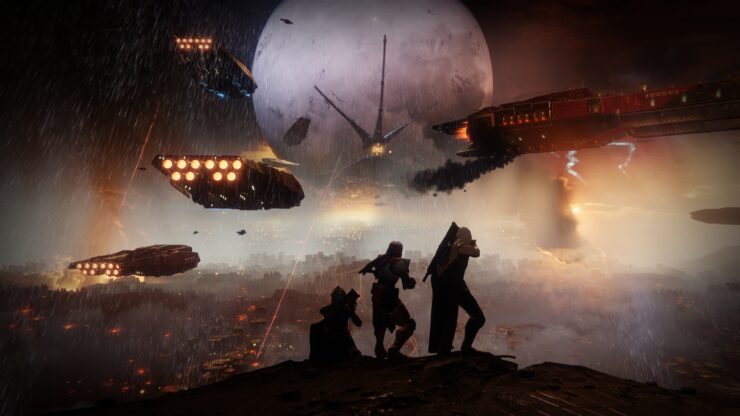 Destiny 2 offers more loot, more locales to explore, and most importantly, more story to play through. Whether playing solo or in a fireteam, this is Destiny at its absolute best.