Today From Software is rightfully recognized as one of the most influential and talented studios in the gaming industry, but before they took the world by storm with the likes of Dark Souls, Bloodborne, and Sekiro: Shadows Die Twice, there was Demon’s Souls. Released at the tail end of the 2000s, Demon’s Souls attracted a passionate cult audience, but the rest of the world wasn’t quite ready for its sadistic charms. The game was a moderate success, but sales numbers were nowhere near what From Software would later achieve with Dark Souls. The game was quietly relegated to publisher Sony’s back catalog, where most assumed it would stay.

Well, what a difference a decade makes! It’s now 2020 and Sony is launching its new PlayStation 5 with a lavish Demon’s Souls remake as its main exclusive. An unlikely event worth celebrating for Soulsborne fans, although this new version of the game wasn’t developed by From Software, but rather the remake specialists at Bluepoint Games. Have they done justice to this neglected Dark Souls ancestor? Does the game deserve to be revived for another run in the first place? Stock up on Half-Moon Grass, it’s time to delve deep into Demon’s Souls…

Many volumes have been written about From Software’s Souls formula, so I won’t ramble on about it for too long, except to say that Demon’s Souls confirms it was brilliant right from the beginning. The way the games force you to play carefully lest you die and lose all your souls but then offer an addiction-forming olive branch by giving you a chance to reclaim them by returning to your point of death without being offed again. Worlds that truly encourage exploration and observation in order to find crucial secrets, exploits, and shortcuts. Demon’s Souls already has it all down pat.

Granted, those who cut their teeth on Dark Souls will notice some differences. Bonfires aren’t a thing, nor is any sort of standard rechargeable healing item like the Estus Flask. I don’t really mind there not being an Estus Flask, healing grass and magic is easy enough to come by, but the lack of bonfires can be frustrating at times. Trust me, the trudges back to certain bosses will be forever seared in your mind (I’m looking at you, Armor Spider).

That said, some of the ways Demon’s Souls differs from Dark Souls are actually positives in my opinion. For starters, the game tells its story in a refreshingly straightforward manner. No trying to piece together complex lore from the ramblings of random NPCs here. Demon’s Souls kicks things off with a cutscene that lays it all out – the kingdom of Boletaria has been overtaken a deep fog and hordes of demons after the foolhardy King Allant attempted to revive the dark Soul Arts. You are one of many heroes who has come to Boletaria on a mission to destroy the demons and lock away the twisted Old One empowering them before they take over the whole world. There are still plenty of mysteries and oddities sprinkled throughout Boletaria, but unlike some other From Software games, you’ll finish Demon’s Souls having a pretty clear idea about what you’ve achieved.

Another thing you may have to get used to is the layout of Demon’s Souls world. Unlike the Dark Souls series’ interconnected Metroidvania-style level design, Demon’s Souls revolves around a hub, the Nexus, from which you can access five worlds, or “Archstones”. Each of these worlds stands on its own with no connecting tissue between them – you can only get from one to another through the Nexus. While this system may sound oversimplified, there are definitely benefits to it. There’s less backtracking and all five worlds are available at once following a short intro, which means you’re almost never going to come to that brick wall of challenge you often hit in other From Software games. There’s always another thread to pull, and bit by bit, you unravel the sweater.

Allowing each world to stand alone also gives them the opportunity them be more unique. Stonefang Tunnel is a deep, dark subterranean warren seemingly inspired by Lord of The Ring’s Mines of Moria, the Tower of Latria is a horrific prison guarded by Lovecraftian abominations, the Shrine of Storms has an almost Ray Harryhausen feel, and so on. Each world not only has its own unique atmosphere, but its own enemies, challenges, and style of play. The Boletarian Palace is a Peter-Jackson-esque fantasy action-fest, while the Tower of Latria has serious survival horror vibes. Of course, this variety can be a double-edged sword at times, as not all the worlds are created equal (I’m not a big fan of the grimy Valley of Defilement), but I wouldn’t say there are any outright duds.

In terms of combat, Demon’s Souls and Dark Souls aren’t that fundamentally different. You can block, roll, and parry, and attack with short and long-range weapons and magic. Your movements and attacks feel “heavy,” but not unresponsive. That said, taking down baddies in Demon’s Souls does have its own unique feel, largely due to the design of the game’s worlds. Demon’s Souls levels are smaller and more constrained than the ones in Dark Souls, requiring more careful strategy. You can’t just get through by rolling your way out of trouble. Bosses are tough of course, but they’re more puzzle and pattern-based than those in other From Software games, and most can be cheesed if you know how.

More recent From Software titles, particularly Bloodborne and Sekiro have really pushed the esoteric combat systems and twitch gameplay, but you don’t need to be an action master to succeed in Demon’s Souls. Yes, you need to be careful and well-prepared, but if you keep your shield up and don’t skimp on the healing items, anybody can succeed. If you’ve found some of From Software’s more recent output a bit overwhelming, Demon’s Souls is, in its own way, more accessible.

I suppose I also need to mention World Tendency, which is often cited as one of Demon’s Souls more divisive features, although it’s really not that complicated. Every world in the game has a tendency, from pure white to pure black – if the world is to the white side of the scale, enemies will be less challenging, but you’ll earn fewer souls and items, and if a world is black, baddies are tougher, but you get more stuff. You can turn the world toward white by killing bosses and black by doing obviously “bad” things like killing NPCs and dying. Ah, but once you die you come back in ghostly Soul Form, which reduces your life bar, but makes it so you don’t degrade the World Tendency further when you die. So, long story short, don’t be an unnecessary jerk and play most of the game in Soul Form and you don’t really have to worry about World Tendency (unless you intentionally want to mess with it).

Honestly, I was surprised by how well Demon’s Souls holds up. Yes, it requires even more meticulous play than some of its successors, but it’s specifically designed around that. It’s less epic than Dark Souls, but you truly get to know every quirk, nook, and cranny of its worlds. Ask half a dozen fans what their favorite From Software game is and you’ll get half a dozen different answers, but, personally, I think Demon’s Souls may very well be at the top of my list.

So, Demon’s Souls is a great game, but is Bluepoint Games’ remake worthy of its name? Absolutely. The new Demon’s Souls is a visual masterpiece that brings each of the game’s worlds to life in a whole new way. The impressive scale and scope of the Boletarian Palace, the foreboding depths of Stonefang tunnel, the otherworldly creepiness of the Tower of Latria – every world is dripping with atmosphere. This is, straight up, the best-looking console game I’ve ever played.

In terms of gameplay, Bluepoint doesn’t stray far from the original. The game’s animations have been updated, but the actual timing of everything remains the same in order to retain that authentic Demon’s Souls feel. Well, not entirely authentic – everything now runs at a rock-solid 30fps in Cinematic mode or 60fps in Performance mode and just feels better. A few other small tweaks, like being able to easily check the World Tendency of each level or send extra items directly to storage if you’re overburdened are certainly very much appreciated. Subtle, but well implemented use of the DualSense controller’s haptic feedback and adaptive triggers make certain battles and moments just that little bit more visceral. Oh, and I can think of few better games to demonstrate the benefits of the PS5’s speedy new SSD – the frequent trips back and forth from the Nexus are now far less tiresome.

Bluepoint’s exemplary work on Demon’s Souls completely transforms the game. The diamond in the rough has been polished to a high shine. This is, quite simply, one of the richest, most believable, and immersive RPG worlds I’ve ever delved into. And boy, there’s a lot of delving to do! If you’re very good or lucky, you could potentially beat Demon’s Souls in around 30 hours, but it will likely take most first-time players longer. Of course, there’s plenty of secrets and achievements to chase, and New Game+ awaits. Demon’s Souls will keep you busy until you cry 'Umbasa!'.

This review was based on a PS5 copy of Demon’s Souls provided by publisher Sony. 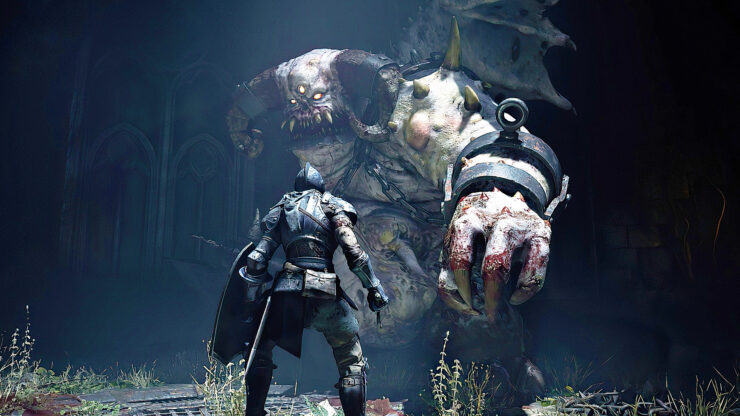 Bloodborne PC Port / Remaster Can Be Done at Any Time Without From Software’s Support; Japan Studio Had a Working PC Build